I went a few times to Cellarmaker House of Pizza in Bernal Heights/La Lengua for dinner. This is Cellarmaker’s second location after their original brewery and taproom in SoMa.

The first time I went they were out of pizza. So I had the meatballs instead. Pretty solid meatballs. Tender. They are beef, pork and chicken. I was a bit leery about the chicken part of the equation but they were flavorful and not dry. Chunky tomato sauce. It came with some pieces of grilled buttered bread and was topped with some arugula and parmesan. Was enough for a meal.

The second time I went there was a line to get in so I went somewhere else. They keep the occupancy at a max level so it doesn’t get too crowded, which is probably a good idea as the space is about the same size as the SoMa location (not that big) which can get crowded as well. The SoMa location doesn’t really serve food so I’m guessing turnover is faster there as well.

The third time I went on a weeknight and managed to get a pizza. Their pizzas are Detroit style deep dish - a style that is becoming more popular in SF with Tony’s in North Beach and newly opened Pizza Squared in SoMa offering examples of the style. I had the classic red top ($16). This is the first Detroit style pizza I’ve had so I can’t say how authentic it is. It’s a square pizza cut into four pieces so each slice had two sides of crispy crust with crisp cheese. The inner part of the pizza in contrast to the edges was quite airy and tender. Somewhat thick crust that tasted a little buttery… A few streaks of chunky tomato sauce were dabbed on the top. I liked it. Nice chew to the crust. One pizza is plenty (actually a little much) for a hungry person, or can be shared maybe with a side in addition.

Cellarmaker is one of my favorite SF breweries and the beers I tried were all quite good. They also have beers from other brewers in this location. Had a nice sour from Rare Barrel.

In general the food was solid and a good accompaniment to the beer. I think the next time I go I might just focus on drinking beer though. 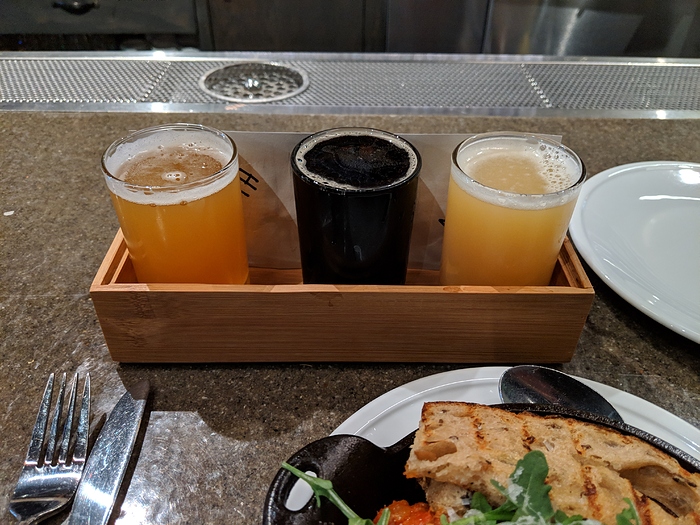 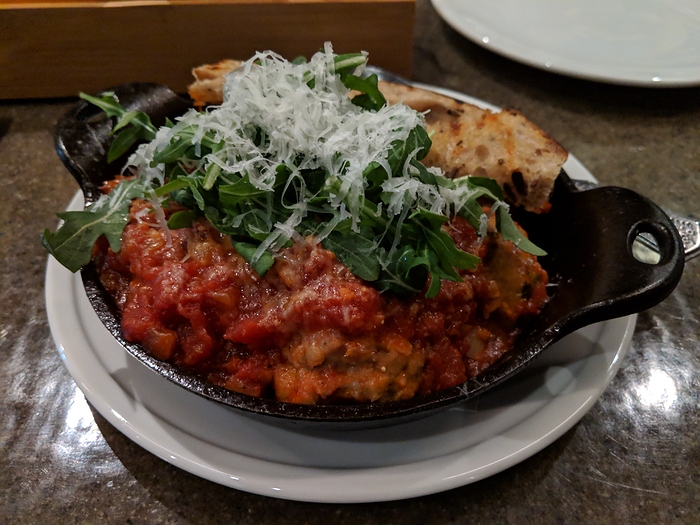 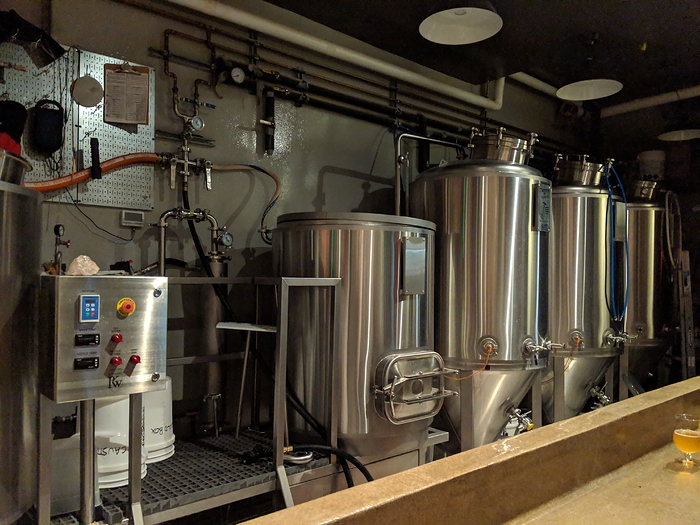 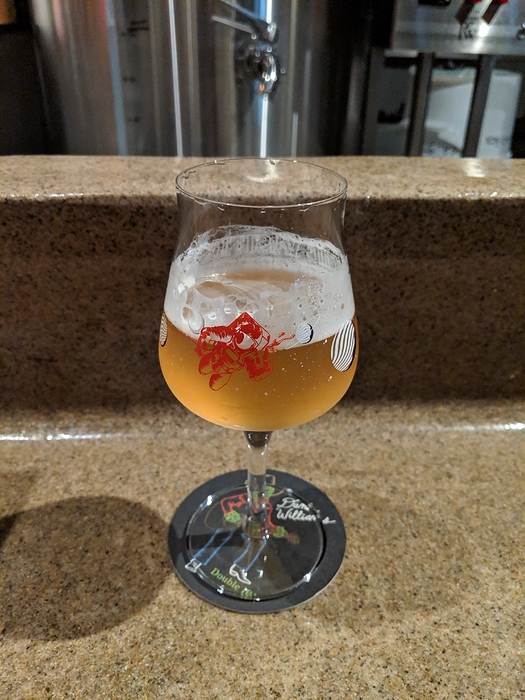 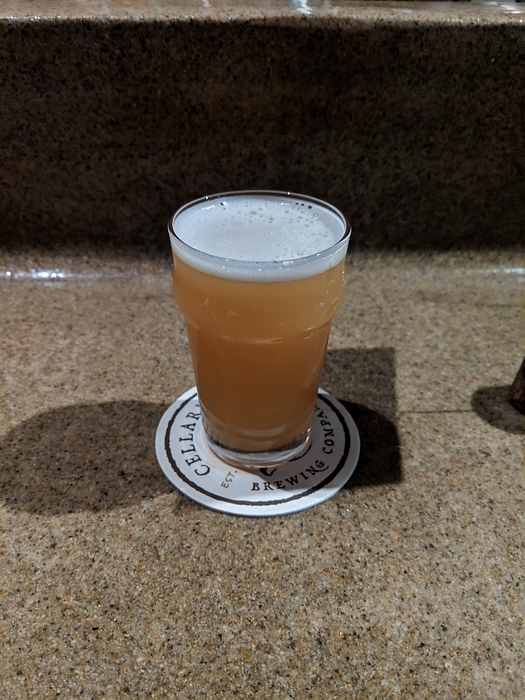 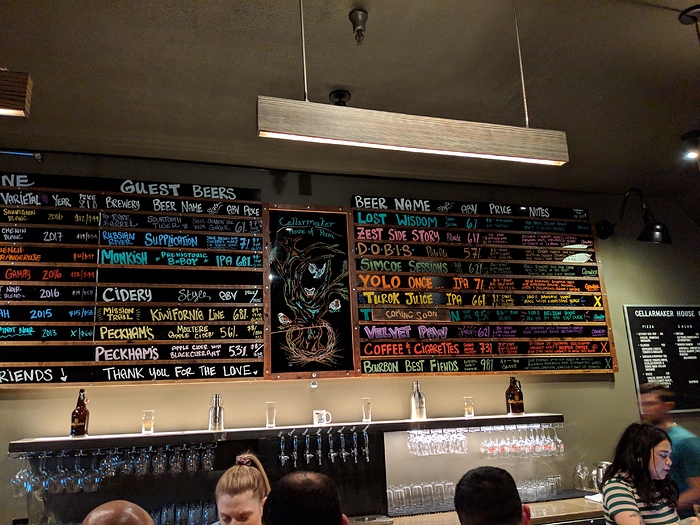 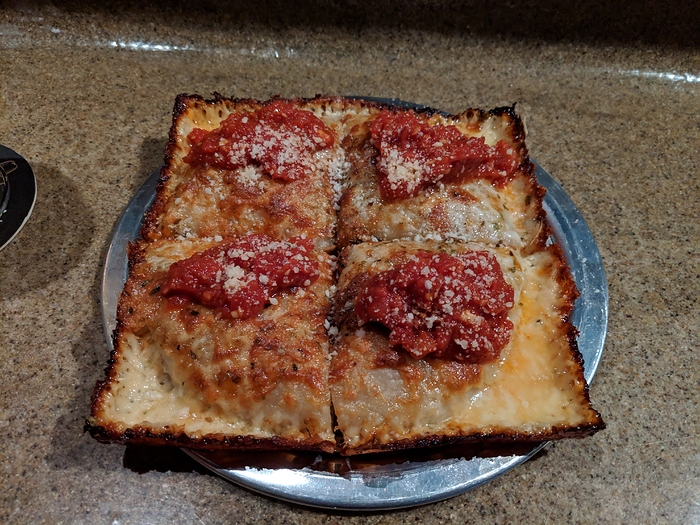 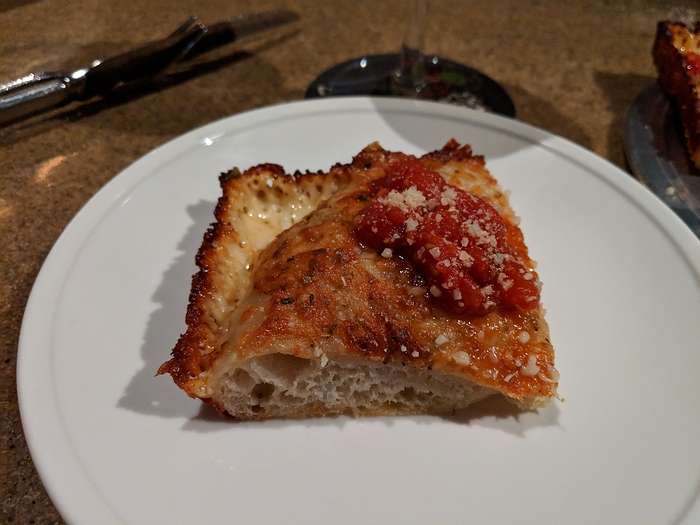 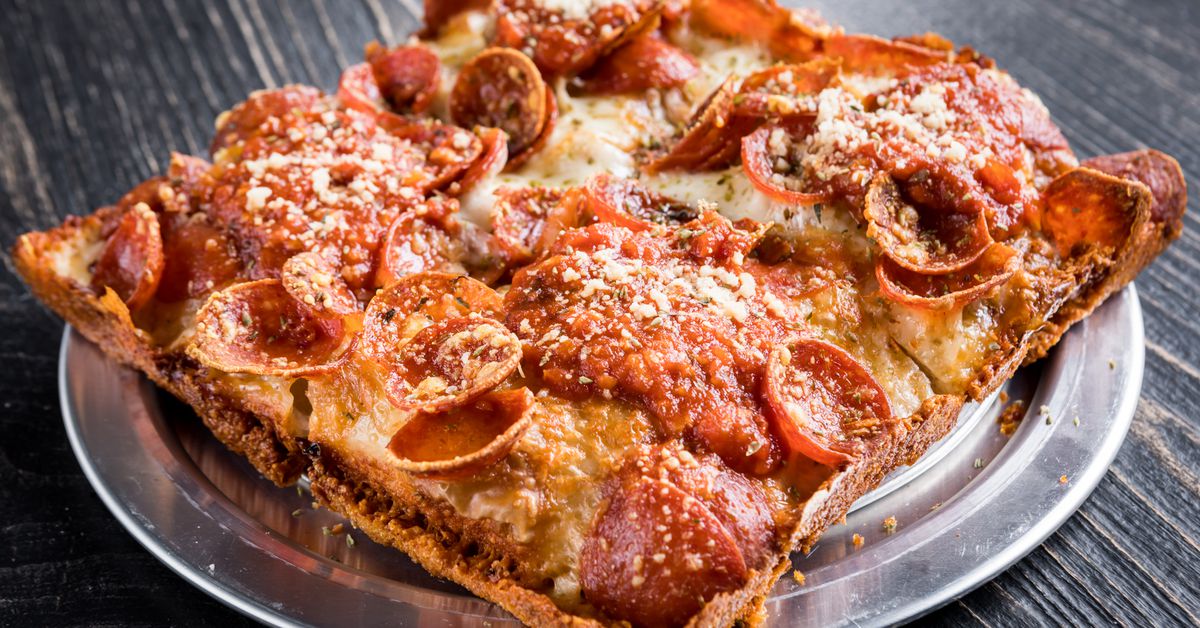 Detroit, known for the style, has a new sister city

Ate here a few weeks ago. I had a burrata salad, which was mediocre, and some cheese pizza, which I found perfectly adequate. I’m no expert on square-cut pizza, though, so I’m not well-suited to comment on its quality.

For a while after it opened, Old Bus was a proper food destination. Not sure I’d recommend coming to Cellarmaker just for the pizza, but it makes a fine accompaniment to the great beer.

Any idea what’s the difference between the Detroit style versus the Sicilian style?

From an earlier thread in the Midwest Forum…

An accepted definition for "Detroit Style" Pizza (from Eater) US- Midwest

I’m posting this here so that I can come back in a while to do a short review on a small Michigan chain turning out Grinders and its own take on Pizza.

My neighborhood. There always seems to be a line when I go by. I no longer like beer, so I hope they have an alternative. 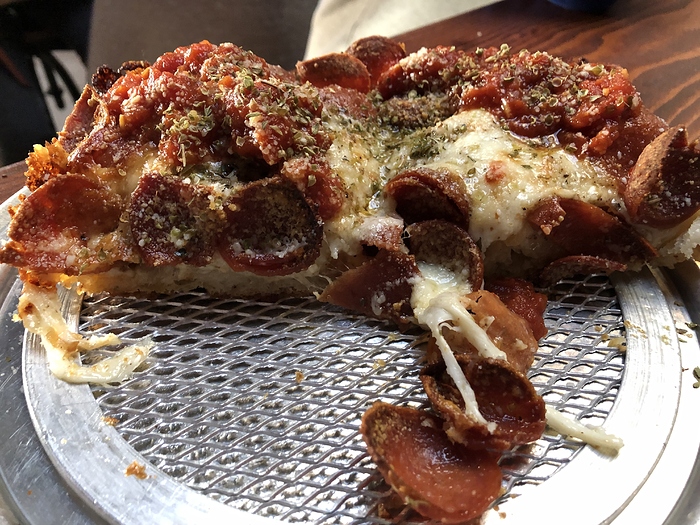 Taller, aerier crust than Sicilian style or focaccia, outer sides not actually dough but browned cheese, frico-like and crisp, not rubbery or tough. Fun, not homogenous pizza experience—- a different ratio or sauce, cheese, and upward cupped pepperoni with each bite. I enjoyed this, and found it more nuanced than a coal-black crusted Detroit style I had in Pittsburgh last year.

It’s a bar/brewery serving pizza rather than a restaurant— you get carded at the door and at 6:20 on a Thursday, packed. Seating is a free for all, and mostly tall tables with round stools, so not family friendly like the other La Lengua pizza places, Zante and Pizzahacker (or nearby Pi Bar).

This is the Sicilian pepperoni. I’ve never been, so don’t know if this is different from the “classic pepperoni” beyond being twice as large. As @hyperbowler says, it is airier than the Sicilian pizzas I grew up with in NY, but crustier than a bready focaccia style. I liked the dough and sauce, the cheese didn’t stand out to me. Pepperoni was kind of overcooked/dry, but plentiful - not my favorite. Overall nice to have a another style of pizza to the SF scene. Easy order for pick up. 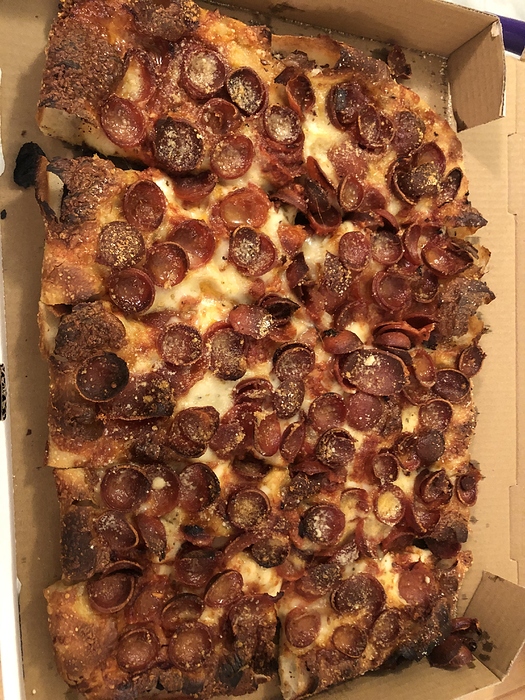 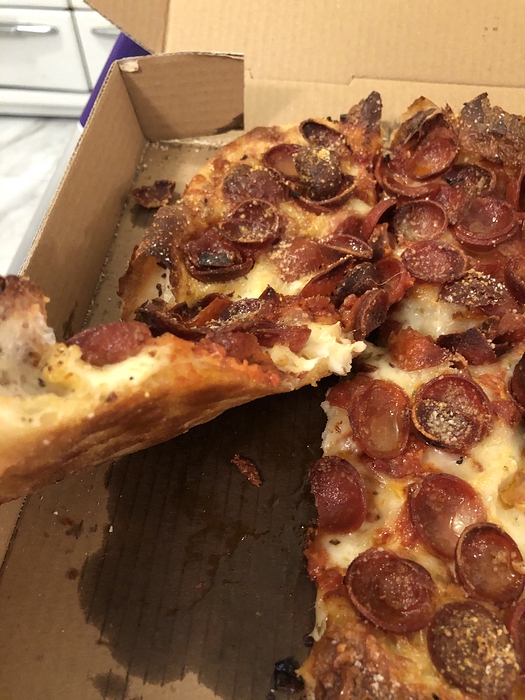 The “classic pepperoni” is the Detroit style with the crispy cheese edges. I hadn’t realized that CM was doing a Sicilian style at this point.

After sampling both a few times, I think I like Square Pie Guys’ toppings a little more, but CM’s cheese crust a lot more.

I haven’t tried their Sicilian but looking at your pics it looks a little thinner in the crust than their Detroit ones. I ordered a Detroit style pepperoni pizza from CHoP recently via delivery and it was good. Very good chew to the crust and with nice crispy cheese edges. I have to agree that the pepperoni could use a little work though - maybe it had to do with the placement - many of the pepperoni cups were stacked on top of each other giving some bites that had just a bit too much pepperoni. The pepperoni itself was nice and crispy though. 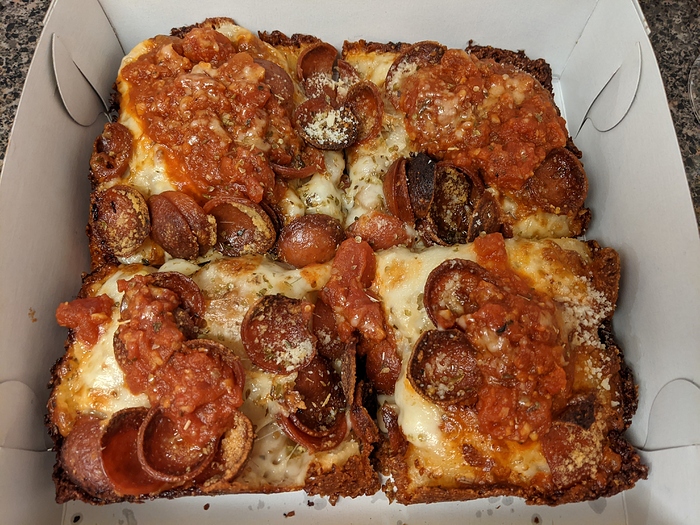 Oh one nice thing about the fact they deliver now is that you can order their beer as well. I got a 4-pack sampler. 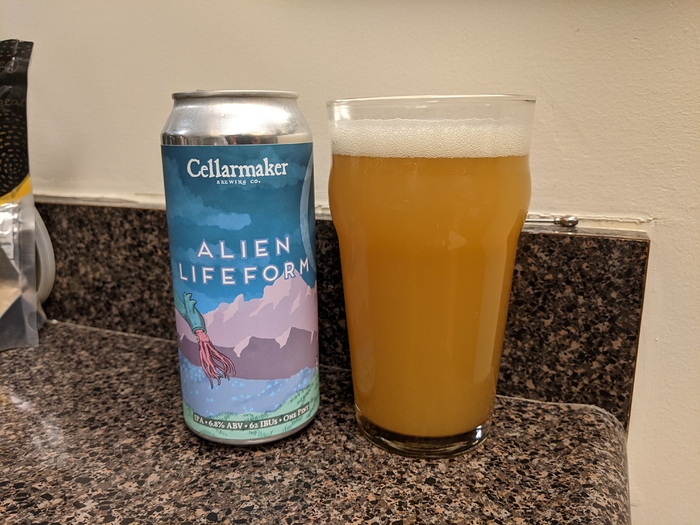 Cannonical detroit pizza is only to be had at buddy’s original location right on the edge of detroit proper. Atmosphere is excellent, even with a bit of tourist trade, there were police officers and local families, unabashed red checked table cloths. Crust is light and foccia ish without being very light. Reminds one of roman style. key element is the toppings are in the reverse order, cheese outside so it can singe a bit. i think house standard toppings were something not crazy like pepperoni and olive. cheese mix was good, something aged like parm mixed with a decent mozz. sauce was great in that American red sauce way, not like chicago.

i would really like a bar that serves st louis pizza. it is served as a shared plate like nachos, but so much as a separate meal. please report if found.

cellarmaker. mmmm. look forward to when i can get a growler fill.

ps. Freewheel in rwc is now selling a bourbon barrel aged, in cans, quite good. not as good as laughing monk, but closer to my house.

please be sure to patronize blue oak in San Carlos, i think they are the best unappreciated beer. The owners favorite style is belgian, although he has a ton of ipa on the menu. ( i only know because he was working the bar one night and i chatted him up ). He has terrible distribution but great beer.