I’ll be spending four nights in Bar Harbor soon and we are on the search for some good casual food and a good source for groceries. The place we are staying has a basic kitchen so we will be eating breakfast in and packing picnic lunches there. We will be spending the days hiking in Acadia so we will probably want low key and casual but delicious dinners. Local seafood and produce would be #1 priorities. My husband loves beer so any breweries worth visiting that also have good food would be good too. Finally, I’m interested in what ice cream is homemade, and I’m not counting Gifford’s as homemade as a lot of the resellers do… Even though I do like Gifford’s.

On my radar but not entirely enthusiastic about these places:
Red Sky
Burning Tree
Havana

Definitely try atlantic brewery and if they still have BBQ there, the ribs are really good. It is a house so when you pull up it is a bit strange, but drive around back and they have the brewing and BBQ operation going.

I’m a fan of the trenton lobster pound too. I like the 3lb hardshells. Yes it is touristy but a fun and relaxing spot nonetheless. Usually the kids that work the kettles are eastern european and really friendly…happy to be in the US.

Thanks! These two places are exactly the type of places we are looking for. And we are staying north of Bar Harbor proper so these will be convenient too.

Havana was OK but I don’t recall it being anything exceptional. It has been quite a few years though. That might be worth exploring.

The thirsty whale I remember. That is a casual bar with pub food. I recall having a good time there with some decent brews. Maybe stop by there for a pint or two if you guys like bar food. Bar harbor is amazing. Even if you dont find great food it is such a wonderful spot. You will have a blast. Cheers

Thank you very much! I’ll be sure to report back!

If anyone else has more suggestions I’m all ears!

We were up that way last October, I posted a review our trek then.
But I would recommend a trip to Southwest Harbor and Beal’s Lobsters.

Sadly I haven’t been to Bar Harbor in a while so I’m also looking forward to hearing what’s good now. I do know that Mount Desert Island Ice Cream is house-made and very good. (I’ve recently been to the Portland outpost so that at least is current info.)

Cafe This Way was a favorite brunch spot back when I visited BH more. I see they’re doing dinner now too so it’s probably worth checking out. After a day of tromping around the park we were more in the mood for a casual dinner like a sub from Epi’s than anything fancy so we usually asked for local recs and favored places that were open year-round. ISTR the offerings from The Thirsty Whale were solid and dependable.

Thurston’s Lobster Pound in Bernard is a a fine example of the type with good food and a nice location with indoor seating. Trenton’s also did a good job as I recall.

Beer drinkers I know like Atlantic Brewing. One of the owners also used to run the Lompoc and it was good then (no data on how it is now) so I expect their Mainely Meat BBQ should be just fine.

For groceries I think you’ll have more (and less-expensive) choices in Ellsworth on your way in than on MDI itself. I remember liking the Town Hill Market at the corner of 102 & Knox (near Atlantic Brewing) for drinks and snacks.

Another note… We are driving from Portland and I’d rather take a scenic coastal route from there to BH if the time difference isn’t that great. It will be Tuesday July 4 so I’m not sure if that makes a difference- one route seems to take us through Bangor and another route more south toward Belfast. Does either have an advantage with scenery and potential lunch/brewery spots?

The drive on route 1 is more scenic albeit a bit slower. It goes through Camden which is well restauranted, (though I haven’t eaten there in years) Moody’s Diner in Waldoboro has good diner food and is quite an experience.

In summer and especially on a holiday I’d avoid using Rt 1 as a through route to MDI unless you’re traveling in the dead of night. There’s generally a lot of traffic and the early east-west part isn’t that scenic. The middle route can work well and gets you Rt 1 coastal scenery after Belfast but Rt. 3 can be slow too. The northernmost route is often the fastest. I’d check traffic reports and pre-research lunch options in or near either Belfast or Bangor.

Great lunch options in Belfast: Darby’s and Chase’s Daily. The Belfast Co-Op also has fabulous meats, cheeses and produce to pick up for use once you get up to MDI.

Agree, GretchenS. Had a wonderful lunch and Chase’s Daily a few weeks ago. True farm to table vegetarian. The owning family are farmers. And, yes, the Co-Op is a better than average market of this type. If the nearby Belfast Farmers Market is open, definitely make a run thru it, too.

So we got to BH yesterday afternoon and had a drink at some generic-ish bar before a really spectacular fireworks display last night.

Today we ate lunch at Jordan Pond, which sated our hunger after a morning full of hiking. Acadia is beautiful and Bar Harbor somehow retains its charm despite being overrun with tourists like yours truly. That being said, I am wondering where locals go to get away from the tourist hordes in the summer. I’m feeling a bit weary of humanity at the moment and wondering what would be off the beaten track… Or am I out of luck on this one?

We are planning to hit up the bbq place at the brewery on Friday since it’ll be raining.

Edit: we hit up MDI Ice cream last night after the fireworks and I was not impressed with the flavor I ordered… Blueberry sour cream streusel. There was an artificial sicky sweet flavor that turned me off and I gave half of it to my husband. His 7 layer bar flavor was much better.

Make a short trek to Blue Hill, Maine, not really that far. You will pass thru vintage towns that have some good eateries like Castine…

Too bad about that MDI flavor, that’s not one I’ve had. I’ve enjoyed their Brigadeiro, Nutella, and Boiled Coffee among others I’ve forgotten (eta: the Triple Orange was also good, with multiple orange notes as advertised). A friend really likes their Butterscotch Miso (may have the name wrong) for the sweet/salty combo which is not so much my thing. I always ask for tastes first.

For a break from people try Schoodic Point. That part of Acadia National is also pretty and generally quieter. ISTR some seafood shack places out that way that do a fine job if you’re not looking for anything fancy.

Thanks for the ice cream counseling. I should have tasted it first as I am rather particular with ice cream but the line was so long I felt bad asking for more than one taste. I should have stuck with the one I tasted, which was the brigadeiro you recommended!

Going to get sandwiches at Mother’s to bring on our kayak trip on Long Pond today. Another beautiful day in Acadia.

Quick update…
Loved Beal’s. Fantastic. Exactly the atmosphere I imagine for a Maine lobster pound and the food was super fresh. Don’t skip dessert or drinks.
Liked both Mainely Meat and Project Social. More later.
Mother’s has great sandwiches to take to Acadia which we did two days in a row. Their scones are insanely good.
Thanks for all the intel, everyone. We liked the west side of the island more, much more mellow and our speed.

Glad to hear you are having a great time! We need some pics 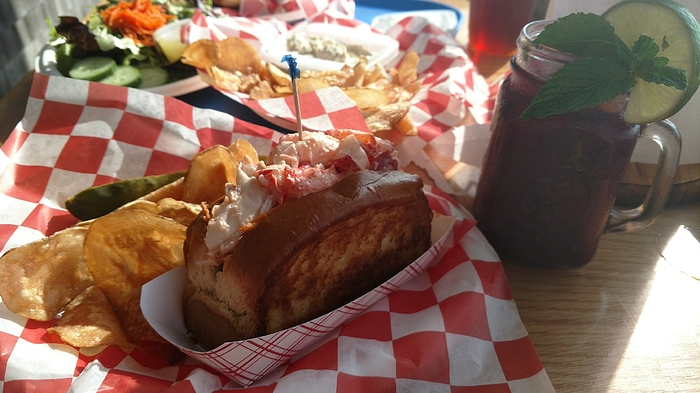