Met up with some buddies and had an epic meal at Cast Iron Pot in Fairview yesterday. In the middle of the pandemic this place was bumpin at full (reduced) capacity on a Monday night at 11pm, they are open til midnight. They are getting a lot of people from the latino community in neighboring areas which was really great to see - as a matter of fact I was the only Korean diner there!

This place has been regarded as one of the best AYCE joints, and they did a really great job. 29 bucks for AYCE with 20+ menu items. 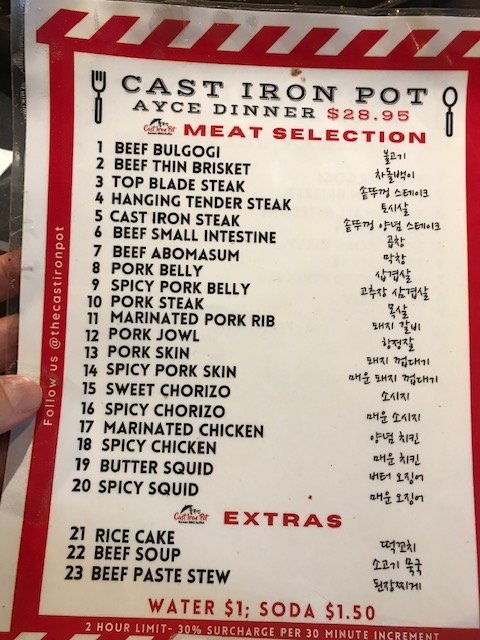 You frequently hear complaints about service from AYCE places like this but that was not remotely an issue here, they really kept the meat coming as fast as we could eat them. Soju prices are incredibly reasonable at 8 bucks a bottle.

I’m not sure how they operated pre-covid but the one downside is that they have almost no sides. Pun kinda intended.

What you see on the grill in the pic plus a cabbage salad is the entirety of what is offered outside the BBQ menu. On one hand, great! More meat to eat! But on the other, there is nothing on the menu that is cool and tart in a way that gives you a palate cleanse from all the grease. I think this might be some kind of genius move on the owners part to limit meat consumption, but I sure as hell didn’t let it stop me! I mean just look at this glorious mountain of meat!

All of the meat quality was generally on the good side for AYCE. If they added even 1 menu item that was pickle like it would be an absolute 10/10 joint.

Also a new AYCE KBBQ has opened in New Brunswick and looks sweet! I will be hopping over there soon and will report back. 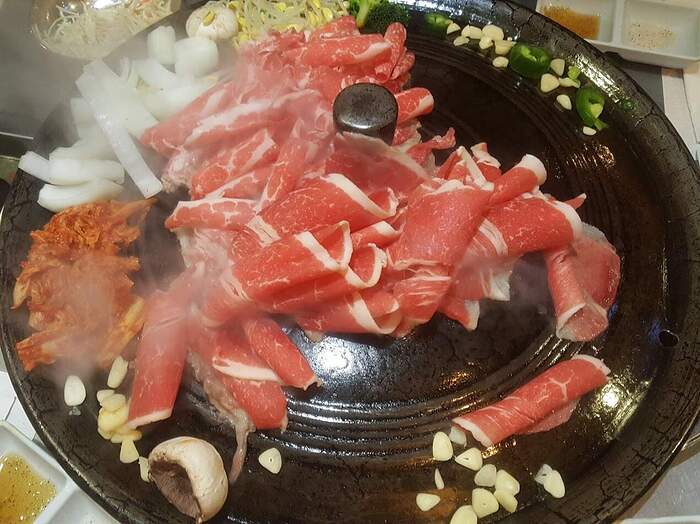 Haha I don’t think I’ve ever seen that at restaurant in the US! It’s the ONE THING I really don’t like eating.

Used to munch them down in Itaewon back in the day. Mostly on a dare!

Oh damn, nice! I love the smell of them, just can’t handle the ricotta like bug insides. I keep trying though.

What kind of back in the day Itaewon we talking? That place is crazy now.

Let me save the rest of you some time, because I’m sure I’m not the only one who had no idea of what they were: Beondegi

Thank you, Curlz!! I would try them. I know that many cultures do eat bugs. But even reading the description is really not appetizing to me. But, maybe the cook has a secret, so I’d definitely have a taste!

Late 80’s…lived in Pohang but headed to Seoul most weekends. Pan gap sumnida!

Thank you, Curlz!! I would try them. I know that many cultures do eat bugs

Please don’t think that all Koreans eat bugs. My Korean parents in their 70’s most definitely would not. Nor would they eat dog. It drives me batty when extreme eating types propagate such things about non-Western cuisines.

Totally! I’m of Irish heritage and no one in Ireland eats corned beef and cabbage! (Did anyone mention dogs though…?)

Mah man!! (woman?) Korea in the late 80s was good times man. I can never forget being a kid and buying 100 won (~10 cents) worth of soondae (blood sausage) from the old ladies on the street. Wrapped in newspaper with a pocket of chili salt. Having that on a cold day just made me feel alive.

And then there all the ddukbokki memories. I still go to my old favorite shop whenever I go to Korea.

Haven’t been to pohang, but saw some videos about the food there. Gotta try some mul hwe (cold raw fish soup) one of these days!!

Last time I went we stayed in Itaewon for a while. The party scene there is absolutely insane. We headed out to catch our bus to the airport at 6am and there were people still hanging/passed out around the streets after a night of drinking.

In case anyone wants to see what bat soup looks like… https://www.youtube.com/watch?v=hd4cKFwm1cQ

That channel is amazing btw for anyone who hasn’t seen it.

I think most reasonable people know that not all people of any culture eat any given food item. I think these days it’s more rare to see silkworm in Korea (due to other foods becoming more available and affordable), but when I was growing up in the 80s/early 90s that stuff was like the people’s snack. Someone was selling it at every corner, it was like as common as a hot dog stand in NYC. God I can smell it just thinking about it. Why does something that tastes so bad smell so good???

Heidi I have a can of it right here… next time I see you I’ll bring it over. It’s like a 10 year old can though.

You can find it at most Korean markets too, HMart carries it.

Made my way from Panmunjom to Pusan and stopped everywhere in between…Taegu and Uijeongbu to name a few…went into the smaller restaurants along the way, ordered off a menu with no English on it and ate whatever they gave me with an OB and some soju. Kamse hamnida! Or is it komat sumnida? I forget

OMG…best video. “Back in the kitchen with Jelly, our bats are about to hit the wok”. Poetry.

Joon, Joon! I have my standards! Feed me bugs, but they gotta be FRESH!

I keep a list of things I need from H Mart at all times cuz you never know when you feel like taking a ride to Edison. I can add beondegi to my list if you’d like.

@joonjoon Any idea on which aisle they would be?

If there is a place that is actually preparing them in some way, even if they are out of the can, I’ll definitely try them. But I’m not really going to open a can and pop one in my mouth. Nope, that I don’t think I really want to do!