Bought a french crepe pan to poke a toe into carbon steel and to experiment w/an induction hot plate. It seasoned right away and worked very well.

The next day I used it to reheat cheese/tomato crepes. Oops, a few small pieces of tomato tumbled onto the surface, which now has a rough area the size of a silver dollar (rough to the eye and touch).

Was it the tiny amount of acid that etched the pan?
Should I use steel wool until smooth then re-season?
Would a deBuyer Mineral pan suffer the same damage?

To clarify, am pretty sure the roughness extends to the metal, not just the coating of seasoned oil. But I haven’t confirmed this with an abrasive. Hoping to rescue the pan - it was very cheap but it’s a handy little thing and I’d like to get more use out of it than the occasional crepe.

Laughing. Ok, I’m in the slow learning group. What did I nail?
So I guess I should put the steel wool to it, reseason, and avoid acids, even tiny amounts?
And assume this is the deal with carbon steel?

Can you show which French crepe pan you have bought?

Hi, NAF, yes. It is the deBuyer Crepe Acier Steel Fabrique en France 9.25" sold at Sur La Table on sale for $20.
After one seasoning was wonderfully slick. Now has the Pox.

I made the crepes on my gas hob. Reheated them on induction, second lowest setting.

I see, I have a similar carbon steel pan made in Italy, I didn’t seasoned it for the first time use, it got all types of marks (aesthetic), I cleaned it well …and seasoned it. It is not very easy to use as it’s very thin and fragile and the induction makes the pan hot too fast. I use it rarely and as a substitue extra pan…

From what I understood, there is a burnt mark, right? Did you try the vinegar and baking soda? It works for me nearly every time. (except once, I burnt a non stick pan with rice on high heat, forgot it totally with a phone call. I had to throw away the pan) 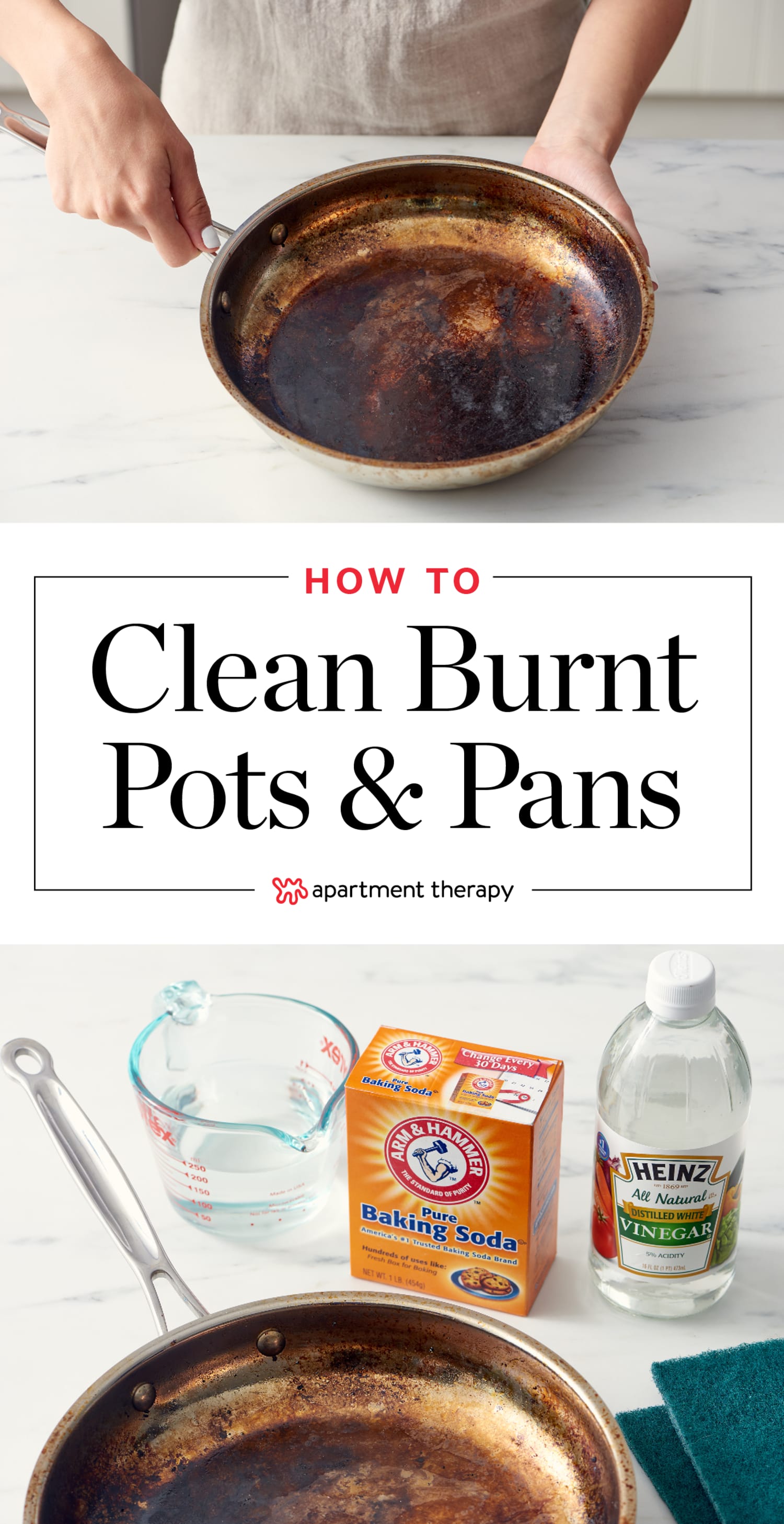 If you’ve ever experienced the pain of a burnt frying pan, I bring good news!

Not a scorch mark, more like an alligator texture.
I used a fine steel wool and was surprised to learn that the texture was entirely in the seasoning film . It really was more dimensional (3-d) than I expected a thin film could produce.
Now will reseason and keep moving, lesson learned.
It works ok on the induction unit, but I am started at 2. On the gas hob it is very responsive to a simmer flame.
Am a little frustrated because the material is very cool. But I think I’ll find it difficult to avoid acids.
Surely the large heavier fry pans are more robust?

Am a little frustrated because the material is very cool. But I think I’ll find it difficult to avoid acids.

Yep, I just read that acid like wine and tomato damage seasoning.

Acid is like kryptonite for these pans–but you can probably get away with some . . .

“Was it the tiny amount of acid that etched the pan?
Should I use steel wool until smooth then re-season?
Would a deBuyer Mineral pan suffer the same damage?”

Not etching the pan – not in sense that acid eats into the metal. Don’t worry about it. Most likely not even the tomato eats into the seasoning layer. Without the photo, I am guessing that you just burned/stuck a small piece to it.
I would use something more gentle than a steel wool, like a plastic scraper first or a wooden turner. If that does not work, then moves to a steel wool. Always tries to a more gentle method.
I won’t call it a damage. These things are rather common and you will get a better handle of how to work around them. To answer your question nonetheless, yes, this “damage” would have had happened to a deBuyer Mineral pan.

A carbon steel cookware is smooth to begin with. The seasoning layer is very thin. Striping the seasoning layer won’t produce a rough surface. Also if indeed the surface is strip, then more the reason, you won’t need steel wool. It is already in its most original surface.

Thanks!
Sorry, the pan is almost black and I couldn’t get an angle on it to photograph the rough area.
I thought if the seasoning reacted to an acid it would melt, not ‘gator.’ The crepes I re-heated showed no dark/scorch marks but I hear you, something must have scorched and stuck.
If I’d taken the scrubby to it I wouldn’t be bothering HOs.

Will now attempt to remove my claws from the ceiling tiles.

If Your Carbon Steel Pan Looks Like This, Don’t Freak Out

The cooking surface is sort of non-stick, in spite of occasional soap and soaking, but the sides are seriously pocked. 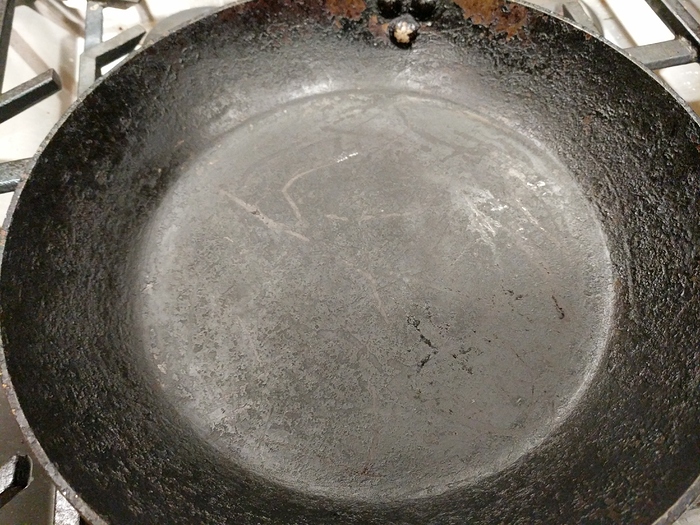 Here they were when I asked the same question on Chowhound two years ago! 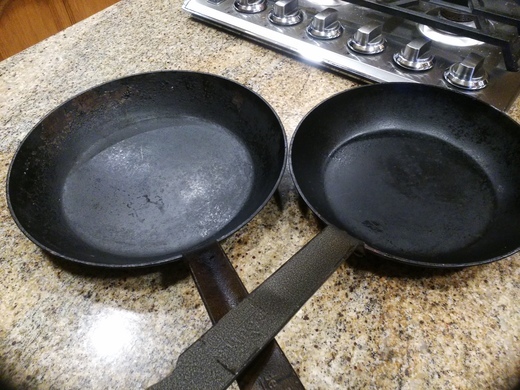 I started with the oil and salt scrub in the link., Any updated recommendations for re-conditioning?

The side of a pan is always difficult because the side does not experience the same heat and same cooking process as the flat surface. Sometime the side will have spots, and sometime the side will have gummy build up. I try not to overly worry about the side because it also has no real impact to the cooking too. Worse come worse, just scrape off the side (not the bottom) and start again. Th oil and salt scrub is a great scrubbing technique for removing food reside without the seasoning layer. However, if your goal is to remove all the gummy and crusty layer on the side, then just use something more aggressive like scouring pads and sand paper.