Can you freeze jook?

I’m planning to make the jook recipe @yimster wrote up a couple of years ago, but I need to adapt it to ensure it can be made fairly quickly.

Yes you can. I freeze it in quart Containers and it is fine reheated in the Microwave.
Also if you start with cooked Rice to make your Jook it takes less time cook (I know this may be obvious but people sometimes overlook it)

Ha, I hadn’t thought about re-using cooked rice for congee, but that sounds like an easy breakfast and a good way to use the inevitable leftovers I wind up tossing out!

When I froze rice in the past, the texture of the grains changed noticeably, to the point that I didn’t find it appealing. Jook is obviously different. But perhaps before you make a big batch, I’d recommend testing the texture.

Here is another Technique to check out looks promising 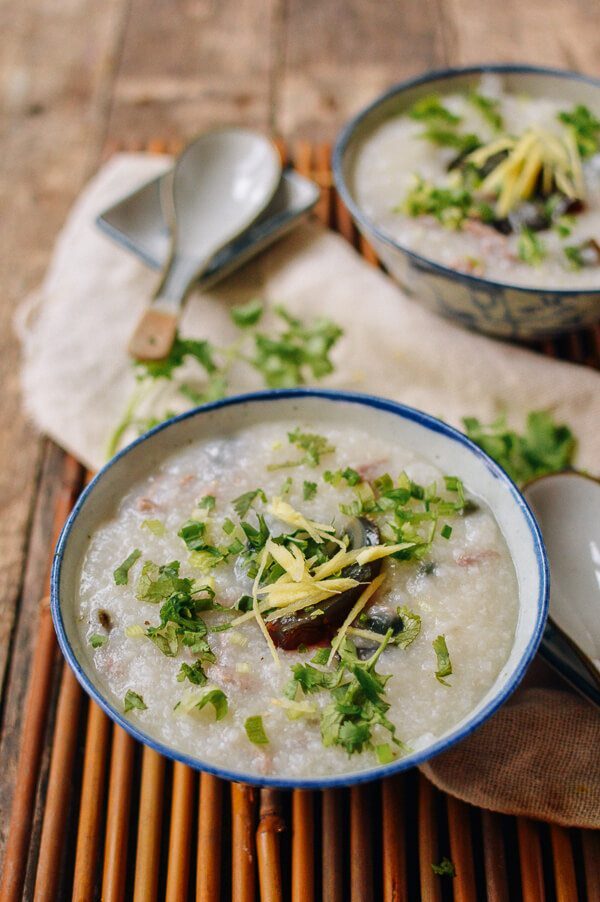 BREAKING NEWS!!! Did you know that you can make delicious congee with slow-cooked flavor from scratch in 20 minutes? I'm not talking about getting it done in a pressure cooker either. This extremely exciting cooking technique

Ah- that explains why texture of cooked rice frozen taste rather different.

Mind blown. I was up late last night making broth, and am so glad I don’t have to prep, and then freeze, the congee. Tip of the year!

Let me know if it works well.

I recommend that you make the broth by itself then freeze the broth. Use fresh rice (broken rice reduce the cooking time in half maybe 30 minutes or so) so the texture will be best. The Canton style of jook is what is called “cotton” texture something smooth and “flowery”. I have frozen packs of broth ready go. I add the broth in a rice cooker with a little water which will melt the broth in no time at all. Then I add the broken rice and within a hour or less depending on the amount of jook you want you are good to go. I have never freeze jook since I do not have leftovers. But I have put jook in the refrigerator for at least a week and it was still good until the pot is empty.

@yimster, thanks a million for such a delicious broth recipe and thanks to @BierMonk for the lead on the 20 minute congee technique. My wife had requested that jook accompany us to the hospital for the birth of our first child, and I was able to cook the jook in the hour or so it took us to finish packing our bags when the “we gotta go” moment came.

I had made, and frozen, the broth as per @yimster’s recipe except for two changes-- I used a whole chicken instead of the bones, and I used daikon instead of lo bak. I stored the 8 quarte of broth in a few ziploc bags, including one with 7 cups of broth for the jook.

For the rice, I used the washing and freezing technique in the 20 Minute Jook recipe, but substituted jasmine rice for the recipe’s white rice.

Assembly was easy-- melt 7 cups of frozen broth in covered pot, boil for 5 minutes, add rice, bring to boil, simmer and stir when possible until rice breaks down, continue to simmer and stir in three smashed coins of ginger for five minutes, and season with salt and ground white pepper to taste.

Either because I used jasmine rice or because the pot was at a sub-simmer due to distraction, it took longer than 20 minutes for the rice to break down but was way quicker than jook I’ve previously made with jasmine rice. It yielded about 5 cups of a nourishing jook.

Hope everyone is recovering well, especially with the gourmet jook you prepared. Its very impressive that when the ‘we gotta go’ moment came, that you kept the cool to cook for an hour…!

Tried this frozen rice 20-minute congee. I didn’t follow exactly the recipe, but the rice was washed and frozen for more than 20 hours. Result: after 20 minutes, the rice were reasonably broken down. Around 30 minutes, the congee was in the acceptable state, not yet silky. Normally, for me, a silky restaurant like jook needs more than an hour or rather 1.5 hour cooking, it seems with this method, as @yimster state, reduces about half the time.

I wonder I used more time because I have started with cold liquid and to thin the congee during cooking, I also add cold liquid.

Next time I will try the tips of Mui Kee (in the first video) by adding a thousand year egg and oil. I wonder preserved salty duck egg could do the trick? Anyone ever tried adding egg?

Here’s a TV programme (in cantonese) about Mui Kee and the cooking technique: another video about the prep: I am most interested in doing a comparison between Mui Kee and Fuk Kee 富記 on Fa Yuen St in Mongkok.

Pre-soak rice in oil. That will reduce time a little. Of course, there are different version of “jook”. Some take longer than others. Some are just broth with cooked rice – which is pretty quick. For the kind I make (a Cantonese style called: 生滾粥), I don’t see the point of freezing. The “jook” is my base.

I don’t see the point of freezing.

The Rice absorbs Water. When you freeze the soaked Rice the Water expands, breaking down the structure or the Starches . This “head start” greatly reduces the cooking Time.

There are other ways to achieve this. Moreover, I think the original poster was talking about freezing the jook after it has been made for storage purpose.

He was looking for a way to have it ready quickly.
If you are saying you do not see the sense in freezing it, It only takes a few minutes to thaw and heat a couple servings of in the Microwave.
I had responded with a method of freezing soaked rice thus my mistake in your meaning

I meant to say that I don’t see the point of doing it myself because (1) I use my jook as the base/medium to cook. It has to go to the pot, not a microwave (2) I rather put the jook in the refrigerator than in the freezer. Take too long to thaw from a frozen state. Like I said, there are different kind of jook.