Can food be abrasive to a nonstick finish?

I was thinking about stirring something like cornmeal to make polenta, could this eventually grind through a finish like sandpaper?

According to the FDA, et.al., “while nonstick pans do abrade with hard use and particles may chip off, these particles would pass unchanged through your body and pose no health hazard”… exploring the possibility that long-term use of the coated pan also increases the chance of food contamination with the resin… slightly more fluoride—but well within safe limits—showed up in the heat-aged pan and the old pan… Cooking enthusiasts are now hailing Silverstone and Excalibur nonstick coatings, which are made of three layers of the same plastic used on teflon and other perflurocarbon resin-coated pans. This material is extremely durable, and so inert (meaning it will not migrate) that it is used in artificial arteries, hip joint replacement parts, and other surgical implants. As with Teflon, however, it will emit fumes when overheated".

The one I’m thinking of has a Silverstone coating, so I guess that’s mostly good news.

Thinking more about it, what bothers me is that when the finish eventually wears down, I will have eaten all of it, as opposed to using uncoated aluminum with polenta, for instance, when the food film that sticks to the pan will form a nonstick finish, in essence, that protects both the food and the pan from each other (while I stir the part that didn’t stick). I think I’d rather cook with an uncoated pan then, and soak my temporary coating off to clean it each time, because I probably eat enough plastic already (since they say just about everyone has traces of it in their blood these days).

Well, maybe that wouldn’t be the best alternative. I was reading about how this could be sketchy for other reasons, depending on where it’s from. Geez… stick a fork in it, but I guess the sticking food could help with that circumstance, if there was no other option.

I think the question is whether food is abrasive enough for the impact to have a material impact in the useful lifetime of the cookware. Given enough time, anything, even water, can be abrasive to anything. e.g. it cuts an entire canyon in Arizona. (btw, this isn’t meant to be snark)

Given you are making polenta in a pot of water, can you use something like a SS soup pot instead of non-stick?

abrasive action has multiple facets to its effectiveness - think about sand paper . . . .

So while food may be abrasive, there is very little pressure, low hardness, and slow speed when cooking. You’re more likely to do damage with whatever tool you’re using (e.g. metal spoon) or when you’re cleaning the pan.

Cornmeal is used to make an abrasive soap, so there must be something to it. I also noticed that if food is not stirred continuously in a nonstick pot that it can harden on the bottom, and then when it is stirred, it will scrape the coating, like pressing hard on a wood utensil (yet I was using a flexible silicone one, so that was all food abrading the surface—I didn’t realize this initially, when I was wondering about the flour that potentially sounded abrasive when I stirred it in there).

Given you are making polenta in a pot of water, can you use something like a SS soup pot instead of non-stick?

Yeah, I was just trying something in a nonstick finish and thinking about its long term use, for my purposes, which probably aren’t the best match.

Cornmeal is used to make an abrasive soap, so there must be something to it

If you’re equating using cornmeal as an exfoliant in craft hand soap to being an abrasive on an industrially applied chemical coating … I can’t help you with that.

That said, non stick coatings are not without their shortcomings - flaking off being one of those. There are nonstick ceramic coatings you could try in place of Teflon but people cooked for centuries without nonstick coatings, so you can absolutely live without them entirely.

If you’re equating using cornmeal as an exfoliant in craft hand soap to being an abrasive on an industrially applied chemical coating … I can’t help you with that.

That’s okay, I didn’t make this stuff up. It is known to scratch, scrape, chip, and flake easily enough to require special handling (or replacing more often), and has been said to abrade and wear as a result of being used by the agencies responsible for testing food grade stuff. Obviously a more abrasive food would be more likely to accelerate this kind of wear and tear, as opposed to making tomato sauce, for example, which is probably a better use for nonstick coatings, because these kinds of acidic ingredients can cause more metal to be absorbed by food from uncoated pots. This is especially true of newer metal pots, which have been used less than a few times, I’ve read.

Maybe this is a matter of perspective. It’s still kind of funny to me though, let me get this straight: everything that isn’t softer than plastic except food can break down teflon? Alrighty, I hope it works out for you, but like I said, foods can get about as hard while cooking as the utensils that aren’t supposed to be used on nonstick finishes. This is possibly the “hard use” referred to by the FDA which abrades it (well I’ve seen it happen anyway, so I think you have to be careful about how, and what, you cook in addition to what utensils you pick, or it will abrade more). The purpose of making polenta is to turn a hard food into a soft one, so I’d challenge anyone to make it repeatedly without it affecting their nonstick finish, except I wouldn’t recommend them eating that much teflon, so nevermind.

By the way, since people use plastic mixing bowls, I can see why doing the same with nonstick cookware wouldn’t concern them. I was avoiding plastic mixing bowls, however (the one’s around here are all scratched up). Has anyone used those, without them being abraded by the food itself, I wonder…

If you don’t want to use teflon there some very cheap and safe alternatives. You know you can get non-stick (non-Teflon, PFOA and PTFE free) ceramic pans very easily. I bought one of these IMUSA ceramic pans at the Key Food supermarket for around 14 dollars. 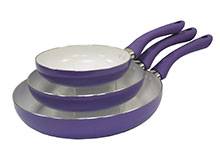 I also have one of those OrGreenic as-seen-on-TV ceramic pans I got at CVS for around $20. I use it for eggs.

I can’t help you with that.

Why don’t you want to help?

I can’t help someone argue something i don’t believe to be true. Thats all - I though that that was clearer in my actual post.

I suppose you wouldn’t want to saute head-on shrimp or other things with hard or sharp shells (mussels, clams, crab legs in the shell) that could scratch the surface. Otherwise, I agree with @Thimes.

Well those don’t stick to the pan anyway. So the use of non-stick is un-needed.

A manufacturer of bulk grain handling equipment has this to say:

Generally, finer particles of corn meal will produce a softer “bite,” while larger particles are desired for foods that expected to exhibit a more crunchy texture…
Care must be taken to ensure that corn meal’s sometimes abrasive properties do not damage the convey line.

Also, in the PTFE handbook, the abrasion tests show that teflon degrades proportionately to the number of test cycles, so it seems that the more an abrasive food is stirred in a coated pot, the more coating would wear off. It may take longer to become apparent than in those tests, but it’s generally recommended or required by institutions to replace worn nonstick cookware, except that nobody seems to say why they think its wearing out wasn’t an issue to begin with (like what wore it out or where the worn coating went)… I find that odd. All they say is that the FDA said it was okay to eat chipped particles, but then they contradict themselves when they recommend replacing chipped or worn pans (which seems backwards to me). Whatever, I’m just making this missing piece of an imaginary puzzle up . . . the piece of cookware wears down, you get a new one, duh!

My feeling is that this post was never intended to be a question, just a way to spread opinion - which is a fair thing to do in this style forum.

There are very legitimate reason to decide to avoid Teflon cooking surfaces. If your feeling is to avoid them, then by all means do so. There are many other options out there and as I said earlier, people cooked for centuries without Modern non stick surfaces. If you are looking to avoid metals too, there are many cultures that cook fabulous food from earthenware vessels. These tools can be adapted to western cooking as well.

The problem of Teflon is that it can degrade at high temperature. My suggestion is to avoid heating Teflon cookware on any stoves (gas, electric or induction). Put the pan on your lap and have it gently warm up to your body temperature.