I belong to a local Facebook group where people list things for sale. Anything from clothes, toys, jewelry even cars can be found for sale on any given day. Today though for the first time I noticed someone selling home cooked food. My question for all of you is this: If this were local to you, would you trust a home cooked meal like this?

It looks pretty sketchy to me, maybe if she took the time to properly can the food it might look a little more legit, but just straight up plastic containers…I don’t know. 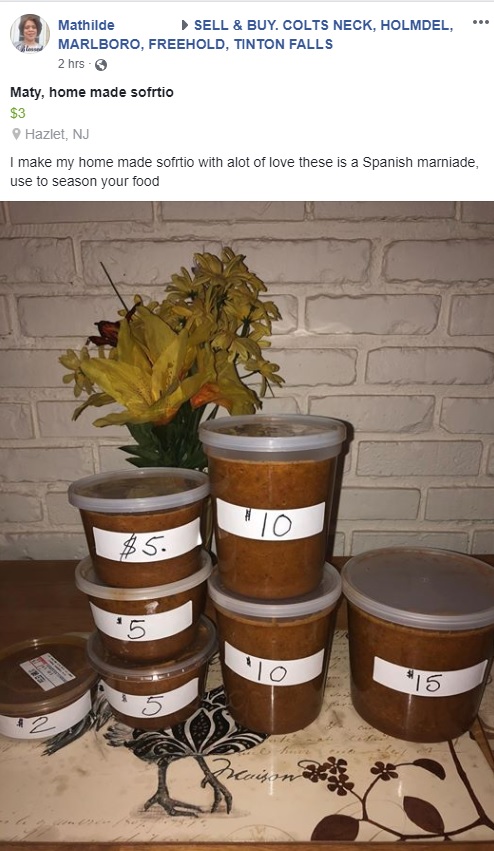 I would be OK with it personally but I am not immune compromised . I would ask when the batch was made before I bought it so I could plan accordingly how long I have to use it. Sofrito is a foundation or base used to make other dishes, right? So one isn’t eating this straight up but using it to cook?

Interestingly, I would actually be more leery of a home canned product and feel unsure if it were properly canned or not. At least this product is probably kept refrigerated.

Around me, Facebook sellers sell straight up ready to eat meals: 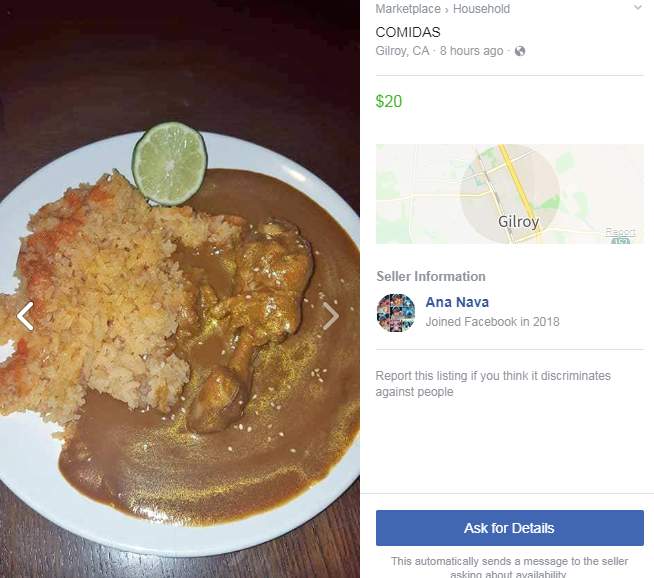 It looks pretty sketchy to me, maybe if she took the time to properly can the food it might look a little more legit, but just straight up plastic containers…I don’t know.

This happened a long time already, you take the risk to buy it, but I think a serious seller tries to be careful about hygiene, if they get people sick, it’s great for their reputation. There lies another problem, the ingredients are not listed, so if you are allergy to something, this is a sure no no.

Personally, I have never bought this type of food. I was gifted jars of jam by several friends, one jar I waited too long, and it went watery and I threw it out.

Is it even legal? But in any case… I would ab.so.lute.ly not buy it.

Yeah I think this goes beyond my faith in my fellow man, not sure I could buy it.

No it is not unless you have licensing, at least here in the US it is that way.

If there were referrals / reviews, and the food was freshly prepared, then maybe.

I don’t even buy baked goods or sweets at fundraisers and I would not buy from FB cooks. A few years ago several people died and many others got sick from potato salad at a church supper near where I grew up in Ohio. Botulism from home canned potatoes used in a potato salad was to blame.

Absolutely not. Too many things could be wrong. Maybe I’m paranoid, but I even avoid food at potlucks that may have been sitting out too long, undercooked, etc. I may be missing out on some great stuff, but I’d rather not risk getting sick.

I would be very unlikely to purchase. There are so many people who have good intentions but no idea of proper food handling. Look how frequently a “can I eat this” post shows up on CH!

A few years ago there was a lot of buzz over this. Proponents seemed to think they could get “real” ethnic cuisine this way. Since it was under the health departments radar it seemed to increase the authenticity. Perhaps. But I guess I’ve just seen too much to be comfortable with it.

That said, I have sold food from my kitchen on occasion. I’ve never advertised and don’t seek it out. I’ve turned down more requests than I have taken. The projects I declined are things that my household kitchen is not set up to safely do , like potato salad for 100. I explain why it should be done in a commercial kitchen and refer them on. At this point I just make an occasional quiche or cocktail nosh platter for a few diehards. I don’t have the interest to turn this into a licensed enterprise. The requests are from people who knew me back when I was cooking out of a commercial kitchen. I’m very clear that my home has animals and that it is not dedicated gluten free.

I have no problem with the deli containers, I use them myself and they are common in restaurants. Probably wouldn’t buy perishable food from a random stranger on Facebook, though.

I’ve been eating at Pot Luck dinners, and participating in them by bringing a tray, for decades.

But this is not Pot Luck…

Sorry, but that is some nasty looking “food”.

No, not at the moment, but there are plenty of people at least in my neck of the woods pushing for it

New Jersey has tried to pass countless cottage food bills, but one senator continues to prevent any of them from passing.

That’s a big NOPE from me without knowing the person and their cooking and storage habits.

Thanks for the link. That food law is strict there. I also read a few pages of the comments. Seems few people have any idea what’s allowed or not and some are already selling on FB.

I used to have annual summer bbq at an acquaintance’s but I brought my own food and did the bbq’ing for everyone else also. I cleaned the equipments myself before cooking. Just don’t trust anyone to do the cleaning and cooking here. You think you know someone until you see their kitchen and how they handle food.

Funny, I would not buy food this way but I have no problems buying food from people sitting on the street serving from warm baskets or coolers. This has usually been around parks in Los Angeles and Mexico. I don’t know why this is any different to me. Maybe it is because none of the food in these pictures looks appetizing. Maybe it is because the street food is a more of a spontaneous situation. Maybe when I am buying it in person I can size up the situation better. I have yet to get sick. Knock on wood.

No need to apologize. I don’t purchase food from Facebook myself. I used these pictures as stark contrast to the deli containers of sauce. These meals seem so much riskier but someone’s buying them. Although, I’m not sure how that chicken and rice plate can go for $20 unless there’s some unspoken or cultural understanding that “comidas” (foods) means an entire dinner for four. 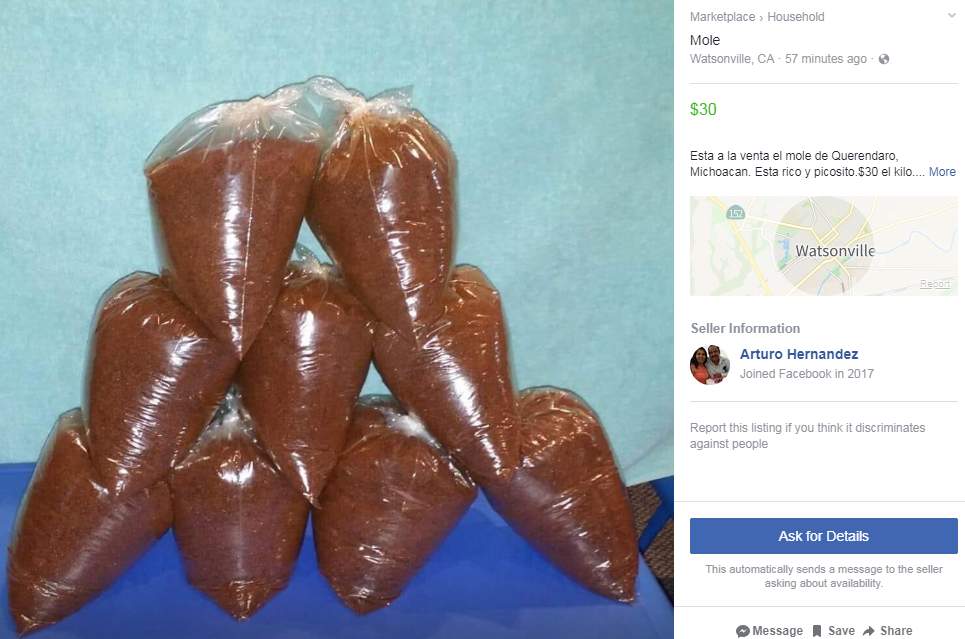 We have many local farmers and artisans, the real deal, they sell at the farmers markets. These are the people I am referring to, the ones I’d buy from and the ones advocating for this bill to be passed.