I’m trying a chard recipe; this one

The directions say to boil in a generous amount of salted water. But I live in California, and a “generous” amount of water, that I can’t reuse because is salted, is something I think two or three times about.

I usually make a chard recipe that allows for brief steaming, and finishes with olive oil, crushed chili, and olive oil. Sort of like this, although this one doesn’t even require steaming. 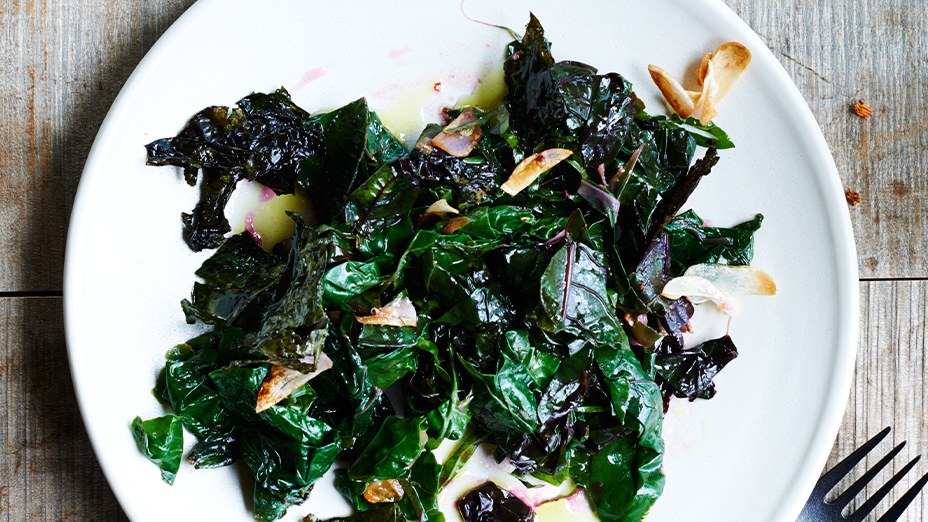 The ultimate summer side dish—it’s quick to prepare, stars peak produce, and goes with everything, especially grilled meats and fish.

It seems like brief steaming should work for the classic chard with raisins and pine nuts as well.

Is there some reason to blanch for two minutes in salted water rather than steaming?

Also, any interesting ideas with thestems that isn’t cream sauce and gratin? Maybe a pickle?

Yes, it sounds like you could enjoy reusing that water to make a chard chutney . . .

It would be great to use the water, but I’m asking how a brief boil in salty water might be better than a steaming.

I wish I could hang on to water until July. We got plenty right now.

Wanting to use chard leaves, and maybe stems.

I don’t think there is any reason that steaming wouldn’t work in almost the same way - you may have to steam a little longer and toss the chard mid-steam since it should collapse on itself causing the leaves in the center to be insulated from the steam.

The only other consideration I can think of between steaming and boiling would be reducing bitter components - but I don’t find chard bitter so this would be for other greens. The boiling water can reduce the bitterness of something like a broccoli rabe by leaching some of those compounds into the water.

Looks like a brief steaming is totally fine here.
I think the blanching is to keep it “al dente” and then in ice water to stop cooking and keep a nice bright color. The recipe includes the stems.

I usually just boil my chard . My water use is minimal. I salt the water before boiling. I remove the leaves from the stalks. Then slice the stalks and add to the boiling water. Cook until tender. Then add the leaves to finish

Thank you! all!
I’m sure I’m acting crazy, but I can’t even flush a toilet “if it’s yellow”.

The fires are out and there is plenty of rain, so I’m listening.

It makes sense that it washes away bitterness and can cool down faster if you strain and rinse.

“The recipe includes the stems.”

I ALWAYS steam vegetables, as well as soft and hardcooked eggs. Better flavor and color (not applicable with eggs).

Thanks all! The steaming worked fine in this situation. And it’s been raining so long and hard I even tossed the water from last week’s sous vide episode!

I steam MY “boiled” eggs too!

I wish I could hang on to water until July. We got plenty right now.

Maybe getting a whole extra freezer could allow you to save most of that vitamin water for later. I froze sweet potato water when I used to boil those often, it had lots of flavor (and after steaming beets, the red water illustrates how cooked vegetables infuse the steam water as well). Lately I’m using about 16 ounces of water to puree an onion, and then I freeze that blend in 4 ounce containers for flavoring soups (I could reuse cooking water for this mixture too, just though of that—as long as it isn’t cooking for hours, there shouldn’t be too much metal in there with the vitamins, just saying).