My lovely neighbor gifted me a can of Lyle’s Golden Syrup, which I have never used before. She’s fond of it on pancakes, but I was thinking maybe we’d enjoy the Lyle’s more in a baked good or another application. (Pancakes require maple syrup in my breakfast universe.)

If you are a fan of Lyle’s Golden Syrup, do you have a favorite way to use it?

I just use it in my coffee. Probably not the best use, but I thought it tasty.

My absolute favourite way is with steamed sponge pudding . Must serve with lots of custard.

Also good on sourdough toast with salted bitter. Has to be salted so you get the salted caramel vibe going on.

I use it in recipes instead of corn syrup, especially in my caramel candies. But it would be good replacing corn syrup in pecan pie, too.

@bbqboy, @paprikaboy, @Babette—all of these suggestions are so helpful and enlightening.

That steamed pudding sounds approachable and tempting. Could be a fun dessert to share with our neighbor.

And I already love pecan pie at Thanksgiving. Swapping in Lyle’s for corn syrup appeals.

My absolute favourite way is with steamed sponge pudding . Must serve with lots of custard.

Although I have also been known to use it in place of maple syrup when I’ve resented paying the price of the maple.

Yes, I use it to make a Canadian treat - butter tarts, instead of corn syrup or maple syrup. If you’re OK with cup measures and not weighed – www.chatelaine.com/recipes/chatelainekitchen/the-ultimate-butter-tart-recipe/. I use readymade pastry

But I also love it in oatmeal/porridge. Yum.

I dont have golden syrup but a jar of brown rice syrup needs long overdue attention. Anyone know if they are interchangeable in a pudding recipe? The BBC link looks deliciously easy. @tomatotomato thanks for asking the question. I had never heard of golden syrup.

Yes, I use it to make a Canadian treat - butter tarts, instead of corn syrup or maple syrup.

Butter tarts?! How have I not known about these before?

The prospect of holiday baking just got a whole lot more interesting.

I had never heard of golden syrup.

An iconic British brand , Dan. It’s history below. For info, Tate & Lyle is one of two companies which dominate the British sugar market although, as often the case these days, the company is now American owned. 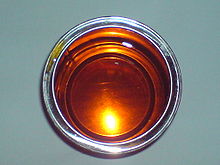 Golden syrup or light treacle is a thick amber-coloured form of inverted sugar syrup made in the process of refining sugar cane or sugar beet juice into sugar, or by treatment of a sugar solution with acid. It is used in a variety of baking recipes and desserts. It has an appearance similar to honey and is often used as a substitute where honey is unavailable or prohibitively expensive. Many vegans also use it as a honey substitute. It is not to be confused with amber corn syrup or amber refine...

Ok, this is helpful. I should be thinking along the lines of honey not corn syrup.

Thank you. I did plan on reading up and you beat me to it, much appreciated, John.

I also use it as a replacement for corn syrup, but i couldn’t get it to work in marshmallows for some reason.

There is an America’s Test Kitchen recipe for frozen yogurt that I use it in, too: https://www.splendidtable.org/recipes/frozen-yogurt

Also, there is this recipe from Smitten Kitchen. I only made it once using quick-cooking oats as indicated. I reckon you could pulse traditional rolled oats in the food processor a few times. https://smittenkitchen.com/2018/09/flapjacks/

@bmorecupcake, that Smitten Kitchen recipe for the dessert bars (flapjacks) made with Lyle’s sounds like a contender for me.

Work is crazy busy now—so precious little time to be had in the kitchen—and now I can’t wait to get a breather to try one of the preparations you all have suggested.

That’s the way I use it in coffee.

What kind of pudding?

I worked for a woman who had a candied nuts recipe that used brown rice syrup. IIRC, you warmed a small amount of syrup, coated the nuts with it, then added a brown sugar, salt, & spices mix that stuck to the syrup. Then bake until nuts are roasted and sugars/syrup has cooked to a candy shell. The brown rice syrup is more neutral in flavor than honey and doesn’t carry the stigma of corn syrup.

I have poured it on pancakes/waffles in lieu of maple syrup and I use it to make a candy called honeycomb/hokey pokey. I saw it on a Nigella Lawson program many years ago made it the next Christmas and my family went nuts for it. It’s been a staple ever since.