Beignets - any favorite recipes? My son and I are reading a bunch and not sure which way to jump

My son and I have read about a dozen recipes for beignets. I’m not really sure why but he’s decided that this will be his contribution at some point during Thanksgiving week when his 3 sisters and new BIL will be home. And he wants to do at least one test run beforehand.

Do you have any favorite, well-tested recipes?

In particular we’re noticing some repeated variations. Some call for bread flour, some AP, but no explanation for the selection. I’d think a lower gluten flour like AP might make for a better, softer product, but he thinks the gluten in bread flour might help give it more tug/bite.

Some call for whole milk, some call for evaporated milk. We’re not sure why one or the other might be the better option here (and whole/evap doesn’t necessarily correlate with those calling for AP/bread flour).

The other thing is frying oil depth. I’ve seen some call for as little as 3/4 inch and others as deep as 4 inches. If 3/4 inch will do the trick, why waste oil with a 4 inch depth. Do y’all have preferences here?

Thanks in advance for any suggestions.

I’ve never had a beignet but would Cafe du Monde be a good starting place? No recipe but I’m linking an FAQ. I wonder if you could even call/email them?

They unapologetically say “it’s got gluten folks.” Mix of wheat and barley flours. So your kid may have a point. And theirs has milk.

I love that your kid is so committed to this cooking project. I hope one day my 7-year old will be likewise.

Thanks. Interesting in that one hears so much about Cafe du Monde beignets, but I didn’t realize they sell a pre-made box mix, and it seems pretty widely available. I am kind of hesitant to contact them with questions about their in-store recipe. Probably toss me out the door, figuratively speaking. Or tell me to buy the box mix.

I love that your kid is so committed to this cooking project. I hope one day my 7-year old will be likewise.

Thanks! He kind of goes in spurts where he wants to learn new things for a while then suddenly he’s done for a month or so. Hopefully your kid will be more consistent! He’s a HS senior and really just got interested maybe 2-3 years ago, once his older sisters started moving out. Maybe he felt overshadowed by them - his next older sister has been baking and cooking since she was 8 or so and is really good.

I’d like it if he’d try the CdM pre-mix beignets, at least for this first effort, but I know I won’t be able to get him to. Once he focuses on something he wants it to be “real” (to him, meaning everything from scratch). Same thing when we make falafels - I’ve read reports from people here and on CH that some of the boxed falafel mixes are pretty good and nice time savers, but no, that wouldn’t be “real”. Last week he was determined knock-off Popeye’s spicy chicken sandwiches. Other than some tech advice (pounding to thin and managing fry oil temp swings) he wanted to do it all himself. And they were surprisingly really quite good (the surprise part was just because I’m suspicious of recipes claiming “just as good as Restaurant X’s!”).

This attitude is fine with me, though. I’d rather him get some grounding in the mechanics from the ground up, then when he’s older he can decide if the time saving pre-mixes a good fit.

He got around to making the dough for these last night and fried them today. Really nice, maybe a bit more chew than I would have liked, which I attributed to his insistence on following the recipe reciting bread flour instead of AP.

The baking daughter (daughter #3) helped him by rolling out the dough evenly, which he was a bit apprehensive about. Otherwise it was all his show. Even clean up!

Sorry I didn’t think to snap a shot until most were gone. 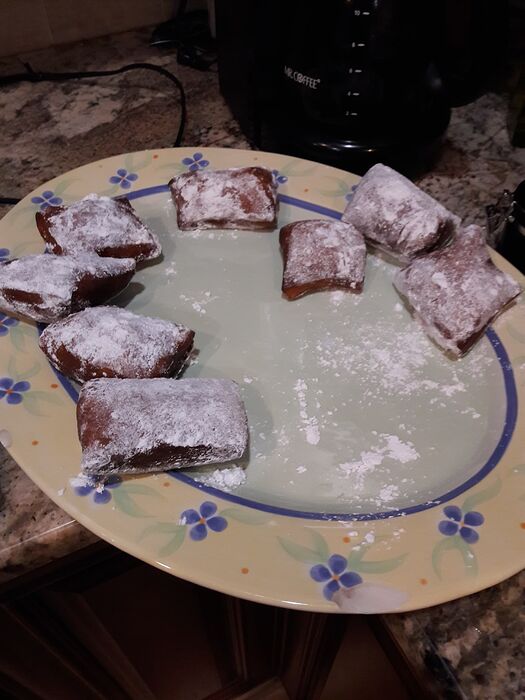