Very good-
12/12/15 Taste Buds. Taste Buds is a South Indian restaurant in Sunnyvale. Great rendition of goat dom biryani today (take out order). Rice that were fluffy but not stuck to each other. The plate was spicy and fragrant. Pieces of goat (they also said in the ingredient list that its lamb) with bones on. Came with a lemon wedge, hard boiled egg, raita and sherva. Balanced spicing- not salty or oily like many are.

Today’s version I like it as much as the best version from Peacock before it closed a few blocks away, and the best version at Kabob and Curry in Santa Clara (except that they usually only have it after 1pm on weekend lunch)

They do have some consistency issue when it comes to the spicing level. It usually ranges from barely spicy to very spicy (like today). I ordered it over the phone and they never inquired about my preference of spicing, so I am not sure if its because the kitchen apply spices differently over time or if its because they could tell over the phone that I am not from South India. Maybe I will ask them next time. Though this is something I experience at almost all Indian restaurants with this dish.

Didn’t see any cloves/ cardamon pods in their version.

I look forward to more reports, and would like to learn which places use the super long rice I’ve only seen at Pakwan and BBQ & Curry in Marin

How long is considered super long? I never seek them out specifically though I remember hearing one brand of super premium basmati rice sold in grocery store fits the criteria.

In Taste Buds’ version, there are some grains that are half an inch to an inch long.

P.S. the buffet biryani is not the same as the standalone dish.

1/2" to an inch sounds like what I’ve encountered at those places.

We had the goat biryani from Shalimar (SF, Jones location) a couple of weekends ago. Biryani is definitely not one of their strengths. The meat was super stringy that we ended up throwing most of the meat away

We had the goat biryani from Shalimar (SF, Jones location) a couple of weekends ago. Biryani is definitely not one of their strengths. The meat was super stringy that we ended up throwing most of the meat away

Years ago when I lived next to Shalimar Sunnyvale I went there quite a lot and they even knew my name. Their biryani became inconsistent and way too oily and I haven’t been back for a number of years. BTW, how do the Bay Area biryani compared to the ones you had in Mumbai if you had any?

1/2" to an inch sounds like what I’ve encountered at those places.

At Taste Buds, I think they may be mixing some super long in, because most grains aren’t that long.

Taste Buds’ biryani can be a bit inconsistent too. I wouldn’t be surprised if it tastes different next week.

These are my updated biryani ratings in the Bay Area.

I don’t have much comments - I don’t know the dish well - but would suggest adding Himalayan Kitchen to your list, I wonder how they would fare.
http://himalayan-kitchen.com/

My current favorite Andhra-style biryani in the Sunnyvale area is at Ulavacharu, specifically their namesake Ulavacharu Chicken Biryani. Shah also has a good biryani, especially the goat version.

I love Taste Buds but their biryani has never been my favorite dish. I haven’t had it in a long time so I should see if they have improved. Himalayan Kitchen has an interesting variety of biryanis but I find the overall quality to be mediocre.

I’ve not had great biryani in the bay area. I’m also not an expert on biryani’s, so my judgement here is relatively weak

I’ve had significantly better biryanis in mumbai. There are quite a few places in Mumbai which deliver the utensil in which they cook the biryani (for 20-60 people). they come back and pick the utensil the next day. On my most recent trip (a few weeks back), i had an excellent dum biryani @ kediyoor in udupi (a really small town in south india). The rice grains in that biryani were also super long

My indian colleagues seem to like the biryani from peacock and make it a point to pick some up when they come over. Its good, but i cant tell if its great

My current favorite Andhra-style biryani in the Sunnyvale area is at Ulavacharu, specifically their namesake Ulavacharu Chicken Biryani. Shah also has a good biryani, especially the goat version.

I love Taste Buds but their biryani has never been my favorite dish. I haven’t had it in a long time so I should see if they have improved. Himalayan Kitchen has an interesting variety of biryanis but I find the overall quality to be mediocre.

I tried Ulavacharu’s Ulavacharu chicken biryani a couple of months ago. Its the first time I ordered a dish with the ulavacharu spice. Don’t know if its me, but the spices taste pretty similar to chicken biryani elsewhere. I wonder if I am missing the subtleties or if they gave me the non-ulavacharu version?

Most of the time before this saturday I found Taste Buds’ biryani ok. This time its better. I hope they can keep it up.

Do you like their biryanis at their other locations? (I have not tried)

Had the lamb biryani from Kabob and Curry’s in Santa Clara. The rice pilaf was excellent. If there ever was something as al dente rice, that would be it. Nice bouncy texture for the rice. Nice long quality basmati grain.

Wife commented that the traditional way of cooking great tasty rice was to use a container (or whatever its called) with loads of holes and put the rice in it, put it in another vessel with water boiling at the bottom so the steam rises up, cooks the rice while some of the starch drips down into the water below, reducing the starch content of the rice and giving the rice a great texture. While I am skeptical whether K & B its doing that, or whether they can do that at scale or at that price, its certainly a great bowl of rice.

I’ve had some good biryani at Peacock’s Santa Clara location, but not quite good enough to make the drive past lots of other good Indian restaurants closer to me.

Maybe we need a separate topic, but what are the good Indian restaurants you like and what do you like there?

There is this new Tamil place in Milpitas called Kaaraikudi who claims their specialty is biryani.

Separately, there is a new Andhra place in Santa Clara called Kitchen of Kuchipudi that has some biryanis that I haven’t tried before- Guntur Bilal, Natu Kodi. They also have Hyderabad.

I will have to try them out some time.

Separately, there is a new Andhra place in Santa Clara called Kitchen of Kuchipudi that has some biryanis that I haven’t tried before- Guntur Bilal, Natu Kodi.

I went to get a Guntur Bilal lamb biryani at Kitchen of Kuchipudi this weekend. The restaurant billed itself as Telugu home-style food for the people. I looked up Telugu and its a group of people primarily residing in the states of Andhra Pradesh and Telangana. I am not well versed with Telugu/ Andhra food.

In the biryani, the lamb was great- tender and moist, better than the lamb at the K&B lamb biryani. This andhra biryani was different in style compared to the Northern Indian/ Hyderabad types. Nicely flavored, and very spicy. The rice was a combination of long grain and to my naked eye, broken rice. It was more moist and sticky, likely because the rice was of a southern origin, perhaps closer to sona masoori versus basmati. There was an egg, first boiled then fried in it. The biryani was garnished with cilantro.

I was in a hurry at the time so I didn’t get a chance to ask- does anyone know what Guntur Bilal mean?

The other dish I had was bangla kodi chicken, an appetizer with a fried potato piece skewed around a piece of chicken. Quite tasty.

(Not my pic, but from the menu)
Bangla Kodi: 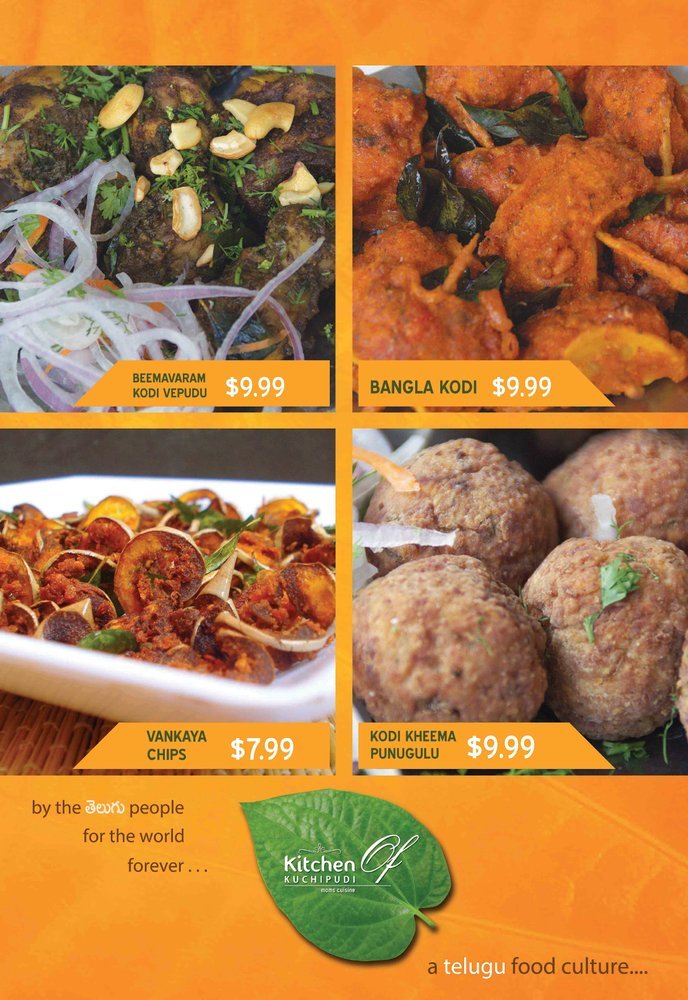 Anyone tried these, or Kaaraikudi?

These pics are from Biryaniz. Does anyone know what Amaravathi and Vijayawada biryanis are? Google didn’t lead to a clear answer. Is that marketing?

I really like the biryani at Hyderabad Dum Biryani. It’s a small place with only a few tables, but they seem to do lots of takeout business. While I was there, one person had an order for what must have been at least 6 party trays of food.

The biryani is done with care. The rice and gravy are served separately, which seems like a nice way to do things. I like mine wetter so I basically used all the gravy. The flavors were deep and complex. Medium spicy, as warned by previous reviews, is not shy at all. I’m not a stickler for rice texture but it seemed appropriately firm, fluffy, and separate.

There’s the DUM food truck, and a very favorable article (I personally thought it was terrible and threw it out after two bites). 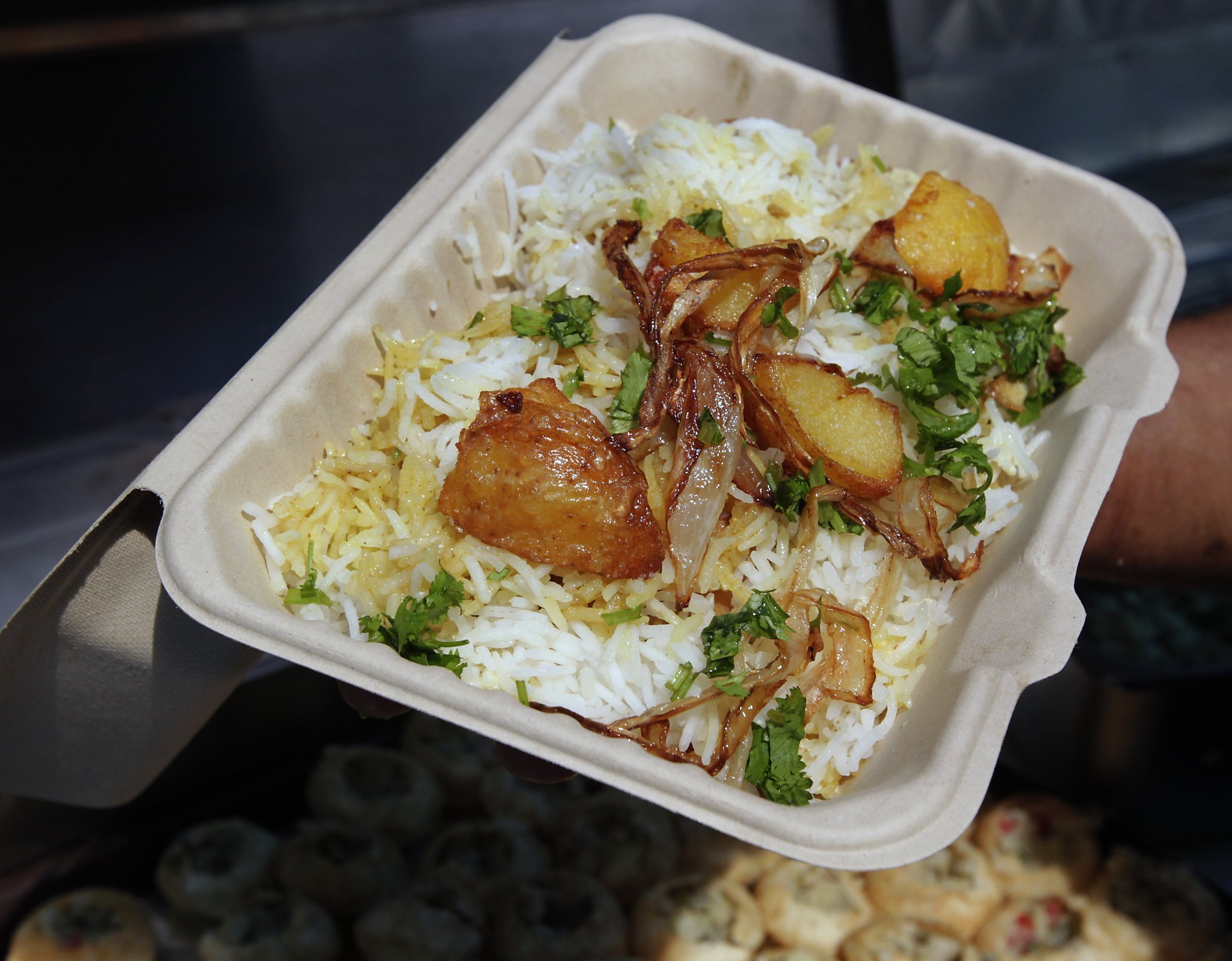