I’m motoring to Port A and back today and want to pick up some Q on the return trip. I recall discussions on this in years past but can’t find one. Lots of people like a place in the highway (59/69) in the middle of nowhere and I’m thinking it is Prasek’s in Hilje? Any suggestions for my trip back to H-town?

I’ve never been there, but reading between the lines in the reviews and photos, it’s a combination BBQ restaurant, meat counter, bakery, gift shop, ice cream, grocery store and gas station. Like a Buc-ee’s in size. Hard to tell if it’s a tourist trap or not.

otoh- a recent search of this board shows a couple people who like their sausage & jerky.

I saw it on the way down and thought it looked too big for the place I’ve seen discussed here. Maybe it was the MIA @brucesw that liked it. It was described as small, family owned in or next to a gas station.

In any event, I ended up returning too late to pick up any barbecue, so sad face. Thanks for looking it up though!

Way too late and not at all on that route, I think my mom, my aunt, and I are headed out to Dozier’s in a few. It’s long been a family favorite but we haven’t been out there since B.C. (Before Covid)

Interested to see what Buchanan had done with the place. Will report back.

I’m motoring to Port A and back today

That’s some roadie. I could pull it off in my younger days but nowadays the DPS would find me on the side of the road, sleeping, slumped over and drooling on myself.

I’ve been to Prasek’s many times. They do a serviceable BBQ sandwich for road food, not Texas Monthly top 50 but good nonetheless.

The big draw is the jerky, kolaches and my favorite pork tenderloin with or without pepper.

Hard to tell if it’s a tourist trap or not.

It’s not a tourist trap but in the middle of nowhere and many folks going up or down 59/69 stop there. I suggest going if you drive by.

I’m motoring to Port A and back today

I hope you at least dipped your toes into the magnificent Gulf of Mexico. It’s a must.

So I escorted the ladies-who-lunch out to Dozier’s. (I was technically the chauffeur.)

The place was pretty busy for a Friday around 1pm. No line to speak of but just a continual stream of customers. There must have been seven or eight employees behind the counter and they were all busy. I spoke to Jim for a minute but he was busy also.

Two of the ladies had chopped beef. Mom was disappointed as she likes the saucy version, and this was all meat. Sauce on the side but she likes the nostalgia of the old 2 fer a dollar chopped beef sandwiches of her youth.

My aunt had brisket and jalapeno and cheese sausage. The sausage, in my humble opinion, is too lean. Maybe it was was a beef sausage, but it just wasn’t fatty enough. (I know, I know!)

I ordered brisket, potato salad and half a chicken. The brisket was very good. Nice bark, very tender. I asked for a half pound and was presented three nice slices weighing just under 1/2 lb. Most bbq places will always present you with “Just a little over. OK?”. I mean - they ALL do it. Those guys slice meat all day long. They know what they’re doing. The potato salad was really good. Not in that sarcastic “but at least the potato salad was good” kind of way, but for real really good.

Anyway, the chicken was to bring home for chicken salad. I did nibble the wing and it was alright, but not nearly as good as Snow’s.

Overall I can confidently say Jim has taken the old standby to new heights. I’m not sure its Top 50 yet but worth a visit. Try the ribs. I didn’t but wish I had.

Also picked up some sage sausage and jerky from the meat counter on the way out. 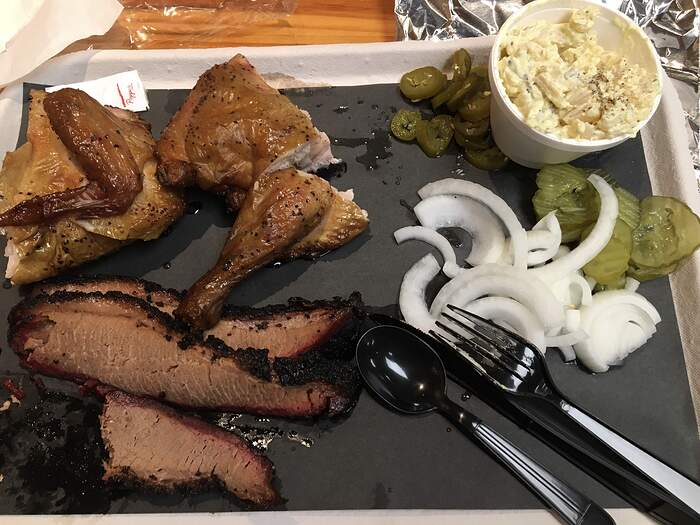 she likes the nostalgia of the old 2 fer a dollar chopped beef sandwiches of her youth.

High school mid 70’s. We were horrified to discover two of our favorite lunch places, Henry’s and Massey’s BBQ joints raised the price of sliced beef sandwiches from a buck to a buck and a quarter. Both were on Bissonnett and close to high school. Pass this on to your mom, maybe we can all get together soon.

Somewhere in that time frame they jacked up the prices on a six pack of beer.

Does anybody remember the old WIN buttons, Whip Inflation Now. It looks like we’ll need a new batch.

No, sad face. Long day out in the sun on a work venture. After, I was starving and hot and went to a nearby restaurant called Doc’s Seafood that came recommended. The food was ok, but no a/c

. Tons of fans and open walls for a sea breeze, but still not what I hoped for. The other recommended eatery was Virginia’s which also seems to be open air. Must be a thing.

By the way, I wonder if it’s safe to eat leftover sautéed crab stuffed flounder with a creamy shrimp sauce that was transported in a cooled car for 3-1/2 hours.

Jim has taken the old standby to new heights.

Good to hear! I’m excited about the potato salad, it’s my number 1 side. I need to send my advance team out there, they are fairly close to it. Thanks for the report!

By the way, I wonder if it’s safe to eat leftover sautéed crab stuffed flounder with a creamy shrimp sauce that was transported in a cooled car for 3-1/2 hours.

Speaking of potato salad, most of the BBQ places here serve a fairly pedestrian version. The exception is Baker’s Ribs. It’s a simple dill/mayo combo and oh so good. BUT their sides with the family pack are so skimpy. About half the amount compared to every other BBQ/fried chicken joint around here. So they finally lost my business as a matter of principle.

An internet search shows the one in Houston, TX is now permanently closed.

An internet search shows the one in Houston, TX is now permanently closed.

Rusty and Misty Roegel gave up their Baker’s Ribs franchise and now operate from the same location as Roegel’s. The BBQ is much better now but their potato salad isn’t nearly as good as BR’s. I liked the dill.

I think that sounds iffy. I wouldn’t.

“I think that sounds iffy.”

I’m thinking that’s wise, especially after 3 more days in the fridge. Next long trip I’ll remember to bring a small cooler for leftovers.

Jim has taken the old standby to new heights.

Next time, if you want to stay home with your feet up watching golf, you can order it from Williams Sonoma. No kidding.