Presented as a public service (?) : 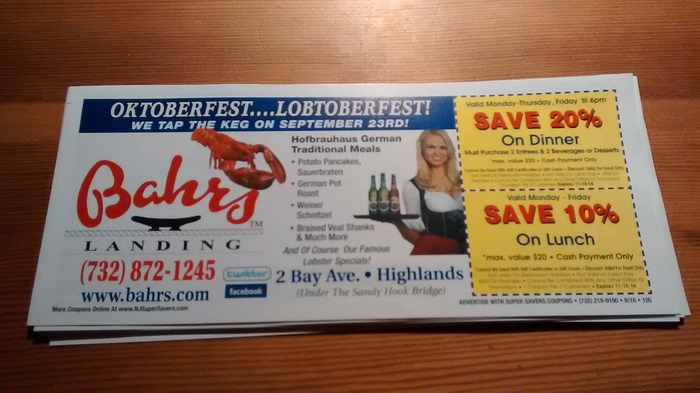 They will tap the keg (and you dear reader) on September 23 RD ! (emphasis theirs)

ps. I recognize the model from Hogan’s Heroes.

Let’s hope the sauerbraten is fresher than their advertising…

Because who doesn’t see a waitress in a dirndl and think I gotta get me some lobster.

Fun fact: the German word for lobster is Hummer. Make of that what you will.

Rough translation, that sounds familiar, if you check the other lobster thread there may be a post to this effect already.

But thanks for the heads up

Ah, @linguafood probably beat me to it!

Well in any event you probably would want to be careful with your pronunciation when ordering this in a German restaurant.

How does bahrs stay in business?

What’s up with places down here having (variations on) Oktoberfest events IN SEPTEMBER?!?

How does Olive Garden stay in business? Same formula, I assume. Mediocre food and not-so-bright humans. (Never been to Bahr’s so I can’t speak to it specifically…)

I haven’t been to OG in years but nothing was ever bad that I can remember. Nothing is mind blowing either. They put those chains up in high traffic areas, as you know. Bahrs is technically under a bridge and not on a major highway so you either need to know about it or happen to catch the sign somehow. I think with the new bridge that is really tough to see that far down with the angle. I suppose if you look right as youre coming home from SH you can see it on the on ramp (not that i go to SH)

Anyway…I just don’t get how some of these spots survive.

Case in point, off the hook. This place used to be loaded with people a decade ago. My buddies and I would go drink back in my bachelor days and it was always filled up. They were serving half ass bar food then too but drinks were cheap. Now at 7 for a beer the place is dead most of the time and still serving pretty mediocre food, at best. There used to be lines to get tables and I haven’t seen that in ages. That place needs some serious help. It’s a shame because I like the venue …nice view , ocean view, good breezes and some good bartenders.

Hey Biondie, do you think they might get more business if they called this the Hummerfest ?

My vote is yes!

Probably! I know a few people who would go for the name alone!

Oktoberfest actually begins today in Germany. The mayor of Munich will be tapping the first keg at noon.

See the education one can get on this site?!? TY!
Of course, now I want to know why they call it Oktoberfest if it starts in mid-September… But that’s another thread.

These originally started as harvest festivals in Southern Germany and were timed to start with the Autumn equinox, 22 September this year, so use of Oktober is a proximation to the nearest month. The one in Munich is starting a little early, but the Cannstatter Volksfest in Stuttgart will start 23 September:

The festivals were basically a chance for the farmers to party after the harvest was in, and originally contained elements that would be familiar to us from state fairs. Stuttgart still has a large flea market that is associated with its festival.

I’ve been to both, numerous times. The one in Munich has largely degenerated into a tourist trap for Japanese, Italian and American tourists with tables booked by the hour for large tour groups.

If I were going to pick one I would go to Stuttgart, but then I have lot’s of relatives and used to live there, so I might be a little prejudiced.

But going to the real deal is a topic for another day.

So Biondie, do you think I could get a Hummer at Bahrs to go with my Wiener?

I would go and ask - see what happens! Take @NotJrvedivici with you to record the event.