Awwright, how the heck am I supposed to use Calphalon hard anodized skillets? And clean `em?

I have two Calphalon hard anodized 12-inch skillets that I got for free about 35 years ago (long story short, several rounds of rain-checks on BOGOs and the store manager eventually gifted them to me).

These are pretty heavy skillets, a bit under 4 pounds, and hold heat well. I’ve used them to sear steak and a few times to oil-sear heavy fish (like swordfish), but I’m not at all sure I’m getting the best use of them. For the most part they sit, unused, in a bottom cabinet drawer.

Tonight I made steak fajitas and seared the veggies (bell peppers, onion, green onion, garlic and ginger) and made an unholy mess of crusted released sugars in the pan. Undaunted, I next stir-fried the skirt steak atop the mess after plating out the veggies.

It was not fun to clean up, but boiling a few quarts of water serially and scraping the pan with a metal spatula did the trick, eventually.

So, what are these things really good for?

Do they excel at some use I’ve not tried?

Are they destined to be hard-to-clean garbage?

(Thanks in advance. Some of the above is tongue-in-cheek, of course.) 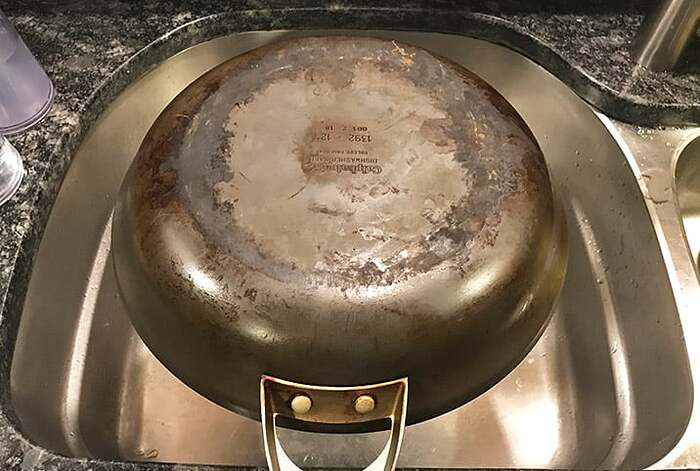 In this guide, I explain exactly how to clean Calphalon hard-anodized pans. You'll learn The best approach for everyday cleaning, how to remove stubborn stains, and how to clean and restore the pan's bottom and exterior.

Hi. Yeah. You will find straight hard anodized pretty stick. Think of them more like aluminum cookware, but with a harden anodized surface. They cannot be used like a nonstick pan. Yes, they may look like nonstick cookware, but they are not. Oil will need to be used, and foods need to waited to cook until they release. A lot of tricks are shared among stainless steel cookware.

Their greatest advantages are: amazing thermal conductor (fast to response to heat source and spread the heat fast), fairly nonreactive to essentially all food pH level, can handle very high heat, and a harden surface compared to typical softer aluminum cookware. Their biggest challenge is exactly what you have seen. Foods stick to anodized aluminum cookware.

It’s funny how much I used to LOVE these anodized pans. I bought them almost exclusively as my starting kitchen batterie back in the late 90s. I seem to remember reading an awful of of good things about them, but for the life of me I couldn’t tell you where. I cooked with them for a good 10 years before making the changeover to SS and ECI.

I don’t recall sticking as a big problem for me, but I am also kind of “frugal” with the heat when I cook. Plus, aluminum is a good conductor so the pans always seemed hotter than I thought they should be.

Usually, the deglazing method works well–heat up the pan and pour warm water in it. Stir and scrape as if you were making a pan sauce. A light tough with a Brillo pad was usually enough on the tough spots.

I haven’t seen new AA pans on the market in some time, except for those that are nonstick coated. So maybe they aren’t all that cracked up to be.

Agree. That is the most efficient way.

I have a 5mm Vollrath anodized aluminum pan I’ve used for camping for a few years now. It’s great at searing, responsive enough to heat changes, and the only minor downside has been trying to avoid wearing it down with metal utensils or dishwasher use. I believe the real problem with anodized aluminum cookware is consumers. You see this all the time with stainless cookware reviews on Amazon.

People who don’t have any real training in the kitchen make a small mistake while cooking and food gets stuck to the pan. After what feels like an hour of frustrated scrubbing they go to Amazon to give their Demeyere Proline 1 star and complain about how sticky and “stained” it is. Never mind that “staining” will happen and does not effect the cookware or the food.

This same effect happens with anodized aluminum, only slightly worse due to the fact that this stuff not only looks like nonstick cookware, but many nonstick lines are advertised as anodized aluminum due to their exteriors. The cookware does so many things right, but it confuses people who take it out on customer service reps, and the manufacturers.

Even Vollrath stopped producing my model somewhere within the last 2 years, and they cater to commercial kitchens who generally know the difference. Deglazing is definitely the way to go here.

Edit: I should probably clarify I’m not passing off any kind of judgement on anyone. I’m simply trying to share my interpretation of iluvcookies observation about seeing less of this cookware around.

Thanks, and received in the manner intended.

I’ve not had so much trouble with steaks and what not, but do think trying to get veggies with a fair amount of sugar, like onions and bell peppers, hot enough to blacken in that pan was a mistake.

I sometimes use cast iron but most often use a cheap Aldi non-stick for that chore. Its NS coating is worn down to nearly non-existent, but there’s just enough left that a single boil afterwards tends to get all the scorched sugars off.

After what feels like an hour of frustrated scrubbing they go to Amazon to give their Demeyere Proline 1 star and complain about how sticky and “stained” it is.

It’s something like this that netted me my first Le Creuset ECI. A family member received it as a gift and used it once. She decided it was a “heavy, bright colored piece of junk” and asked me if I wanted it. With an offer like that, how could I refuse? So yes, often consumers either don’t know what they have, or don’t know how to use it properly.

Loud and clear. Some people buy nice pieces that they don’t yet know how to use. They expect an improvement over their current batterie; and find out most pans are not non-stick. They didn’t do their homework and are pssed they wasted the money. If it’s my SIL, I get the bennie of those experiences. Got a nice CI Dutch oven because she didn’t feel it could get clean without detergent. Aside from cleaning and reseasoning it, lovely piece.

You’re supposed to clean them? JK. ?

They don’t look great, but I use them all the time, especially these, but not really for searing a portion of meat.

This one has a steamer insert 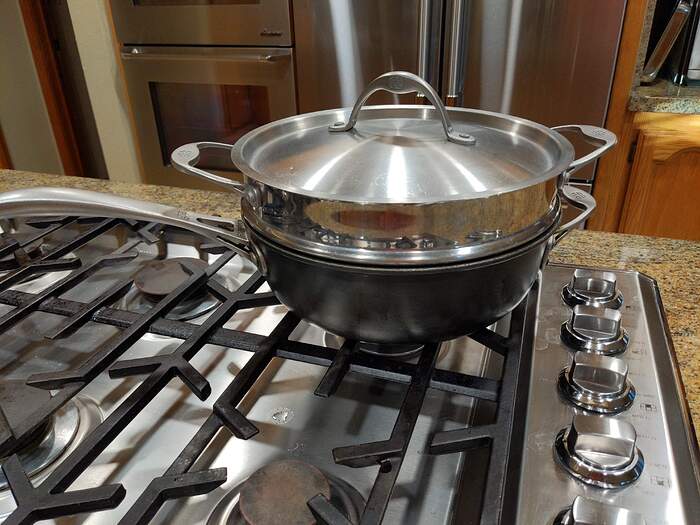 This one for searing chicken, but not steak. 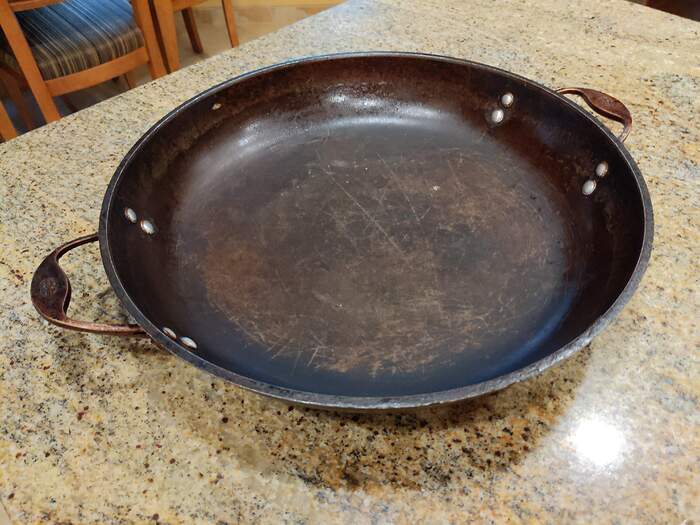 I often use this when browning ground meat or veg. 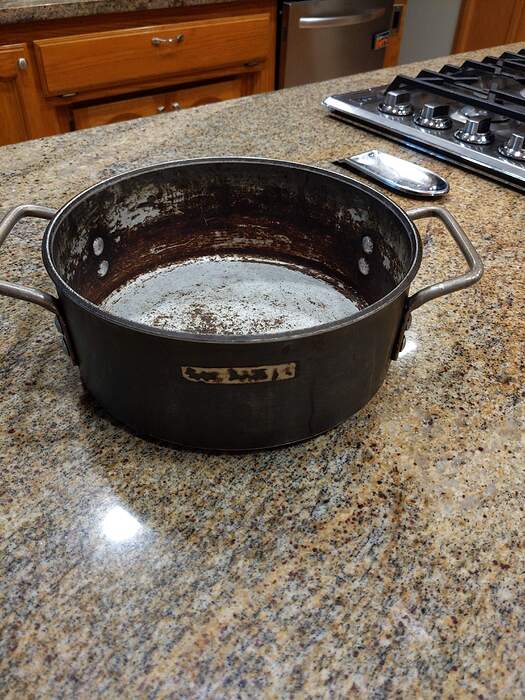 I do think a lack of consumer research is a big factor. There’s also the cookware myths like cast iron being “even heating” that get thrown around a little too often. A lot of home cooks also likely don’t have a grasp of the settings on their stove. After years of practice with my electric setup I don’t even go above 5/10 unless I want to boil something.

Another factor seems to be how different cookware reacts to different kinds of stoves. You get really used to the way one style of cookware works on your stove, and sometimes it’s just too difficult to figure out what you’re doing wrong with a new style of cookware. Even for top Chefs in the industry learning to cook is a lifelong process, and it’s a shame so many home cooks seem to have such a disadvantage with their fundamentals.

They DO look great. Love it when I go to someone’s home and there’s some copper, or proline hanging, and the owner tells me the history of the cookware, but the cookware itself is mysteriously without ware. You have normal pots and pans obviously used by someone who loves to cook. That’s why we buy the pots and pans.

Last night I made beef bulgogi and seared it in this pan at a pretty high temp (but not as high as when I blackened/charred the bell peppers and onions), and cleanup was pretty easy despite it being a dish with a fairly sugary marinade - brown sugar plus a grated pear.

I had a pound and a half of meat so I ran it in 3 batches, deglazing with 60ml water between each. That’s probably another big mistake I made with the fajitas -

veggies … made an unholy mess of crusted released sugars in the pan. Undaunted, I next stir-fried the skirt steak atop the mess after plating out the veggies.

I should have deglazed after the veggies instead of being in such a hurry to get the skirt steak on. Thanks all for those suggestions.