This was our second visit to Moor Hall - we were last here in November 2017. Although we generally prefer traditional three course meals these days, the occasional high end tasting menu gives you an opportunity to eat things that you wouldn’t instinctively order. And the only choice to be made at Moor Hall is whether to have the five or eight course tasting. We went for eight, of course. I suppose one of the issues with tasting menus is that each course has taken ages to develop and perfect so, once it’s right, it’s going to stay on the menu, maybe with some slight seasonal variation, for ages. So, on the one hand, it was slightly disappointing to feel a familiarity with the four snacks that served before the first of the “official” courses and, indeed, with a number of those courses. On the other hand, they were all delicious last year and so they were again.

The first of the snacks is a single bite thin, crisp shell encasing black pudding and pickled apple puree – classic flavour combination. Then smoked eel in a crisp potato basket, followed by raw mackerel with thinly sliced radish and purslane. You needed a spoon for the final snack – a poached oyster with ham, a lot of dill and a buttermilk dressing.

The first proper course is a sort of “textures of carrot” affair – tiny baby ones, slightly larger baked ones, puree. One of the chefs comes to add a powder of Doddington cheese. I remember the explanation of this from last time – they turn the cheese into a powder and then freeze it, so it goes on your plate as a “snow”, contrasting well with the carrots. Really clever.

Somewhere around here, bread was served. Really good bread with two butters – one cultured (nope, no idea what that means) and a herb one. Later a brioche would be served which incorporated caramelised onions – outstanding!

The combination of turnip and crab was my favourite dish last time and I think it was again. There’s both white and brown meat, thinly sliced turnip, a lovely little background flavour from anise hyssop. And it’s dressed with a broth that manages to get more deliciousness out of a turnip than you would have thought possible. Next up, beef tartare with celeriac, mustard and shallots – the mustard giving it a very butch flavour and, perhaps, a little too much of one. My partner has an aversion to raw meat so the kitchen provided a dish of BBQ’d celeriac – it was the better of the two plates.

Neither of us is particularly keen on lobster and, here, it was just ever so slightly chewy, as it can be. It comes with the most tomatoey cooked cherry tomatoes and unctuous diced bone marrow. There’s monkfish next, perfectly cooked. It’s a really pretty looking plate with artfully placed thin strips of baby courgette giving a slight texture contrast (but they have little flavour) and a cream mussel flavoured sauce.

We weren’t sure what we were going to get next. The menu in the bar had said it would be grouse but the menu on our table said duck. It was very seasonal grouse, the shooting season only being a couple of weeks old. The preparation seemed very much like the duck dish we’d had last year. Grouse is a mild flavoured bird and perhaps it doesn’t stand up to the accompanying beetroot chunks and blackcurrant puree as well as duck does. Served separately, was a little bowl of a ragout made from the offal which I’d have been happy to eat by the bucket load – absolutely delicious.

That was the end of the savoury courses and the first of three desserts was a ginger icecream, really tasty with little dice of ginger in it. It’s topped with shreds of candied root vegetable. Next, strawberries had been sliced and macerated (?) and come with a dab of cream cheese. And, finally, there are cherries, including a cherry sorbet, an almond ice cream and sugar shards. It’s a delight and my partner’s favourite dish of the evening.

Service had been excellent throughout the evening. Staff are on the ball and the kitchen paces dishes exceptionally well. My partner had taken the wine flight and the sommelier’s matching of the wines to the food was absolutely spot on, his enthusiasm for them was very engaging. I’m writing this review a few weeks before this year’s Michelin awards are announced – I’m in no doubt that Moor Hall will retain its star. We’d had a lovely evening.

You sir, are a gent.
What a great review.
Looking forward to Saturday even more now !
E

I’d been in two minds whether to hold off posting it till after your trip there, so as not to spoil anything for you. But I think you’ll find little twists that I’ve not mentioned.

There’s been different sommeliers on our two visits. First trip, an East European (?) woman and, second, a French bloke. Both of them really on the ball with their job. Mrs H usually takes the wine flight with tasting menus and has really enjoyed the selection here, and the accompanying descriptions by the two.

Good as the place is, I’m not convinced by the second star. But, then, I am again not convinced by Michelin not awarding a star to Manchester’s Midland French. I really do not know what more they can do to warrant a star in the Guide’s eyes.

Very fair comment, I think. If the menu, from what you say, hasn’t developed much since last year, why bump it up ?
Second star for good behaviour ?
On the sommelier front we got the young French bloke, much to my other half’ s delight

much to my other half’ s delight

I think he was Mrs H’s favourite bit of the evening.

Its not just us, or our other halves…
Was chatting to a bloke I know who used to work at L’Enclume, about Moor Hall yesterday. I was waxing lyrical about the sommelier.
Turns out its a mate of his,and…

Good to see that the top three sommeliers were all at northwest restaurants. The bloke at Northcote is also a star. I’ll let you know about the L’Enclume guy in December - we’re going there this year for what Mrs H & I always call the “office Xmas party” (I’m hoping that, once again, I’ll get off with the fit piece from Finance)

Jay Rayner reviews it in today’s Observer. He liked it but concludes that it would be “a much better restaurant if it stopped taking itself so damn seriously”. 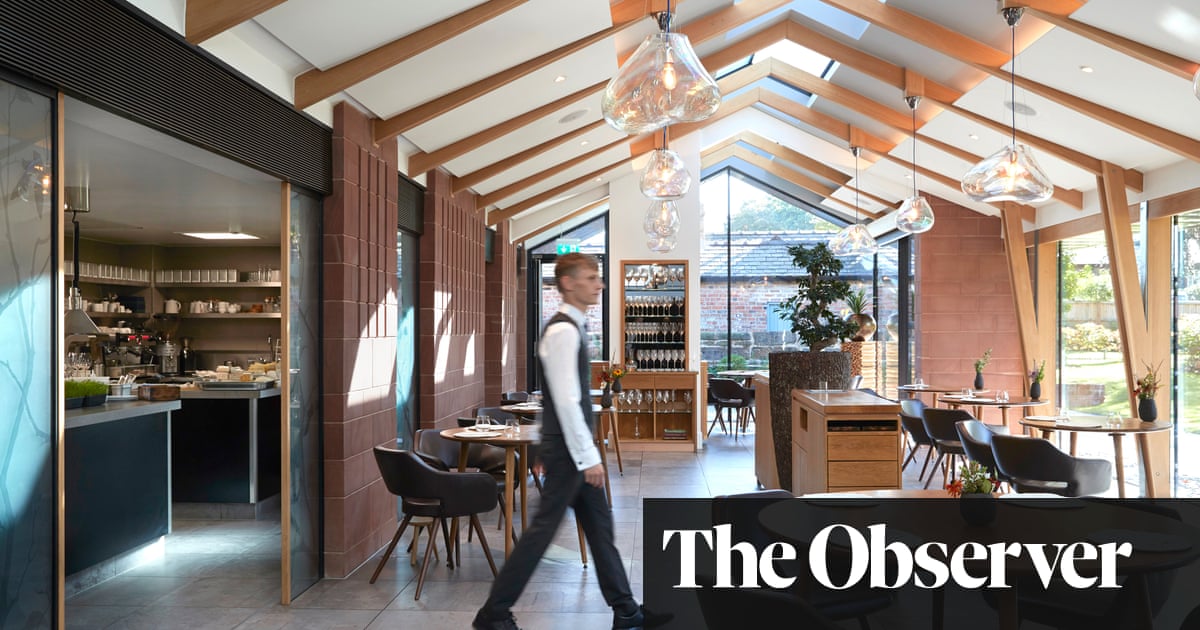 Some of the cooking here is exceptional, but the self-importance is hard to stomach, says Jay Rayner

They ask that you arrive 30 minutes before the booking time “to experience the full Moor Hall journey”. You may have thought you were going for lunch, but no. In the age of X Factor we are all on a journey.

30 minutes ahead? A good 15 minutes is already a big effort for me. Usually just on time or 10 minutes late, the standard here. Twice we have been 15 minutes early, the restaurant chase us away and insisted they were not opened.

A week before my booking, secured with a credit card, an email turns up repeating all of this and reminding me that if I cancel within seven days or fewer of that booking (a period which, given the date of the email, has already started), I will be charged £125 a head.

Cancelling policy here is much shorter, varies from 2 days or just 1 day before the meal.

Cancelling in the UK is also usually much shorter. To my mind, they are playing on the restaurant’s popularity here. Wrongly! Cancellations are most often last minute - someone is ill, work committments are changed, etc.

I’ve no problem with request to arrive 30 minutes before. It gives time for an aperitif and their unusual charcuterie freebies. The tour round the garden and kitchen must be a new idea (or, maybe, only done at lunch when, perhaps, they are not as busy)

“These courgettes go on our monkfish dish, here are fruits we use in desserts” – is delivered in a bored monotone, like he’s an undertaker who has trained long and hard to say, “I’m sorry for your loss” to the daily throng of clients. At the end he’s about to take us on a “journey” through the kitchen. I call a halt. I’ve seen more than enough restaurant kitchens in my time. Please can I just go to my table? Apparently, yes.

Quite funny the way he mentioned it. I think if this is done by a charming server, it would be very different. At the same time, I believe for a “professional” like him that had seen all types of restaurants on earth, it could be annoying.

I remember going to a higher end place, service was efficient, but very stiff, they recited the ingredients of the dish so quickly, like a robot and nobody could understand much. Eventually, during the course of the meal, I had to start recording what they said with my phone.

The UK announcement for Michelin stars is tomorrow. I’ve read, online, that Moor Hall could be considered for a third star which would be a remarkable achievment for any restaurant which isonly 3 years old. Personally, I’d be surprised if it gets 3* but I’m lousy at the Michelin guessing game.

… or perhaps it’s reserved for guests who look like they are critics for major, country-wide newspapers!

My thoughts precisely. Never happened when we went and the garden is small!!

Don’t get me started on the Michelins. I really cannot understand why they keep ignoring “Adam Reid at the French” when the Good Food Guide rates it as 11th best in the country. I’m pleased Manchester at last has a starred place in Mana - but I just don’t fancy it. Those really long tasting menus are such hard work - and Mana’s is 16 courses!

I had seen online gossip that Moor Hall might have been in line for a third star but it stuck at two. I’d be interested to know if anyone has experience at Sketch which did get a third.

So, I looked at the website to find that dinner is now £195 each. That is not a typo. I really am struggling to justify that sort of money to myself. Not least as there’s obviously drinks and a 12.5% service charge to add on top of that

I looked at the website to find that dinner is now £195 each.

We’re going to the 2* Raby Hunt in a couple of weeks (an anniversary treat). Dinner there is going to cost £220.