Arbois is a great base for exploring the wine from the Jura with a number of cellar doors in town. It’s an interesting wine region with a good mix of traditional makers and newer biodynamic ones. The wines are quite different from other regions and a bit of an acquired taste for some especially the sherry like whites, which work so well with the local cheeses.

Our restaurant choices were a bit limited as two of our top choices (Le Grapiot & La Balance Mets et Vins) were closed for the week (Bastille Day holiday) but we found some decent places and enjoyed the food.

Le Bistrot de la Tournelle is a wine bar that sits by the river with a nice open air terrace. It has a simple menu of charcuterie and pates with wines from Domaine de la Tournelle. It is perfect for a light lunch or supper.

Les Arcades is a popular spot serving traditional local dishes in a €27 three course menu or ALC. They have supplements for dishes like foie gras and their Bresse Chicken with Morels and vin Jaune (€7). Good friendly service, very enjoyable food, an extremely satisfying holiday meal. We ate there twice, the first time we spent €184 including 2 x wine and the second visit €231 with 3 x wine.

Bistrot des Claquets is a very simple wine bar popular with locals in the wine industry. Its got a decent selection of wines and does a very basic lunch for €16 with a small hor d’oeuvre table and single choice for main, in evening they offer simple bar snacks.

Le Bistronome was slightly more upmarket than the other restaurants and offered a choice of set menus (€29.90). Again very decent local food with a few gourmet bells and whistles like an amuse bouche. Total bill for four was €206 with 2 x wine.

All the restaurants had decent local wine lists with good advice on choices.

Thanks, Phil! Jura is on my list (for some time now). Getting there is a wee bit of inconvenience that’s why I have been putting it off. It would be my (and the partner’s) heaven: wine, cheese and charcuterie. We have got to do it.

Did you gorge on cheese?

Re Lyon, I’m a ware it’s very much a food destination. Most people go to Paris.

Yes lots of cheese - but a lot more regional than Paris so the selection tends to be a little narrower especially in the smaller restaurants we visited. Love Compte but it was quite dominant. Ate some very fine St Marcelin and Brilliant Saverin.

Yes Lyon has lots of food options but they need some work to research as its not as well covered as Paris. I thought the Bouchon scene was interesting - very, very touristy - but there must be some good stuff off the beaten track.

We flew into CDG then caught the TGV from the airport straight to Lyon - its only 2 hours.

The only thing to watch out for is how long it takes to clear immigration. We touched down at 11:50am and our bags didn’t come off the carousel until 12:45. I think they hold the bags back to allow people to clear immigration (and thus avoid theft) as the indicator board had a time next to the carousel number and the bags literally starting arriving to the minute. We two hours to catch the train which I thought would be too long but it turned out to be about right.

The only thing to watch out for is how long it takes to clear immigration.

It’s a nightmare when we tried to leave France, all the scanning and the security queues. So prepare more time for airport than usual. Let’s see how long we need to enter this weekend.

I can fly to Geneva and take the bus to Lons-le-Saunier but that’s still some distance from Arbois. No way to get there from Dijon either (we are not drivers). But I’ll find out the best way to reach Jura when the time comes. Arbois seems to be a good base, as mentioned by you.

Charcuterie, 1 of the best foods close to my heart. 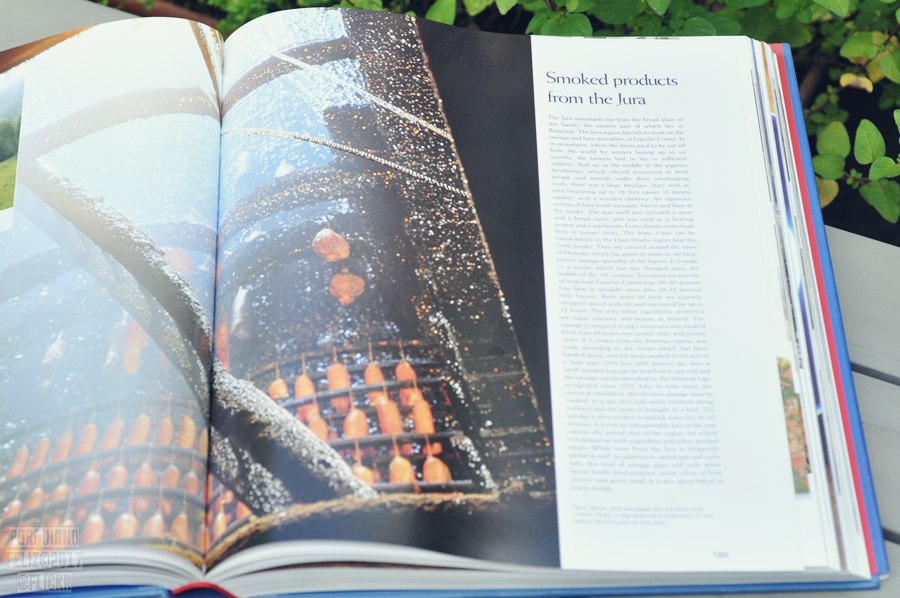 One of Jura’s winter provisions. 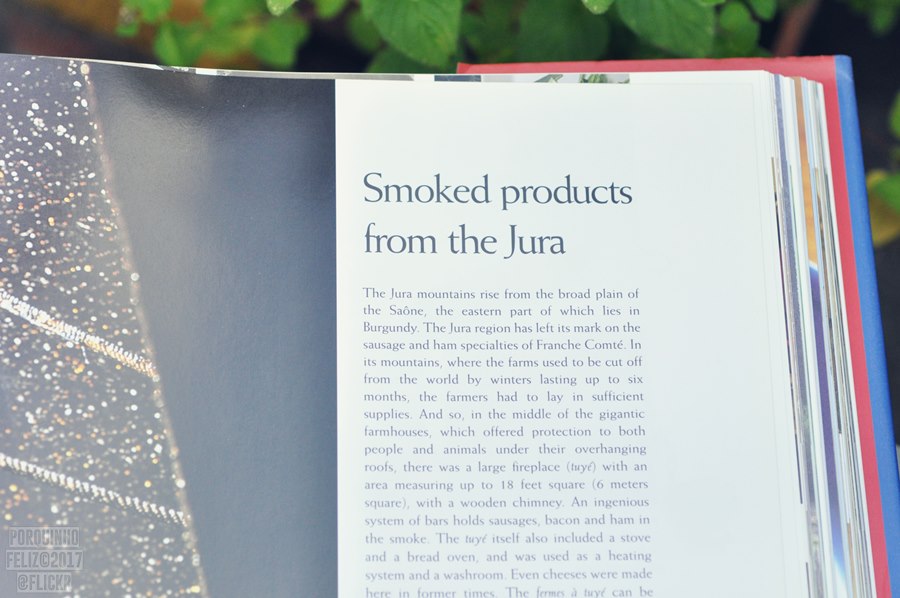 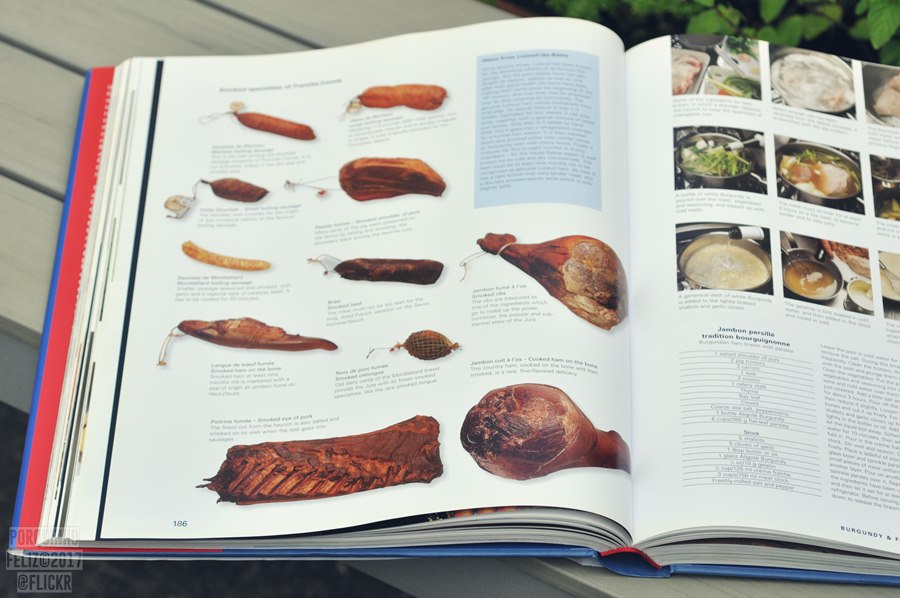 Most prevalent cheese in the Jura. 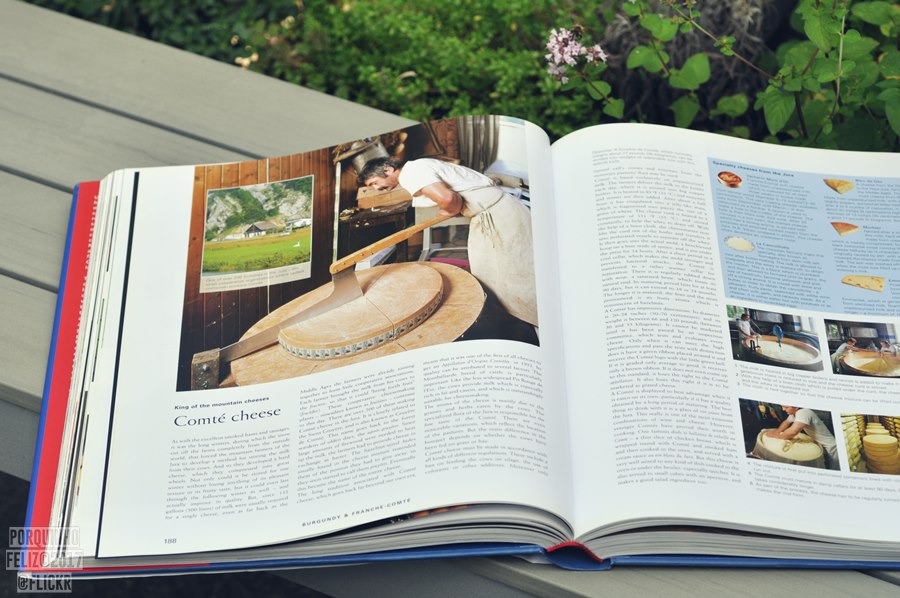 It takes 500l of milk to make 1 wheel. Also, the requirements/guide lines are strict. 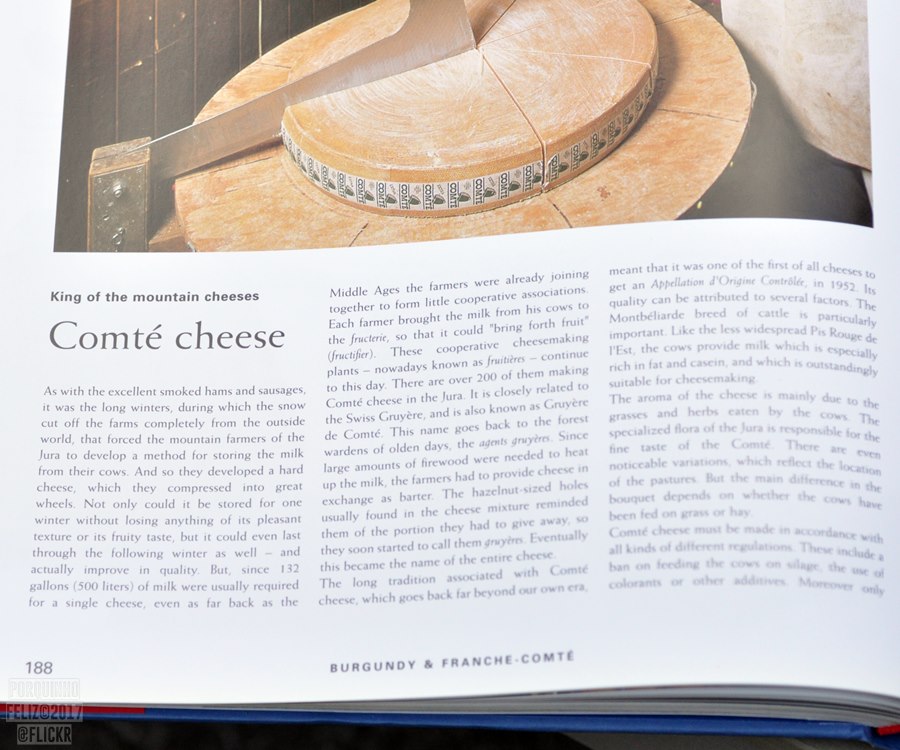 Haven’t had the blue and La Cancoilotte. 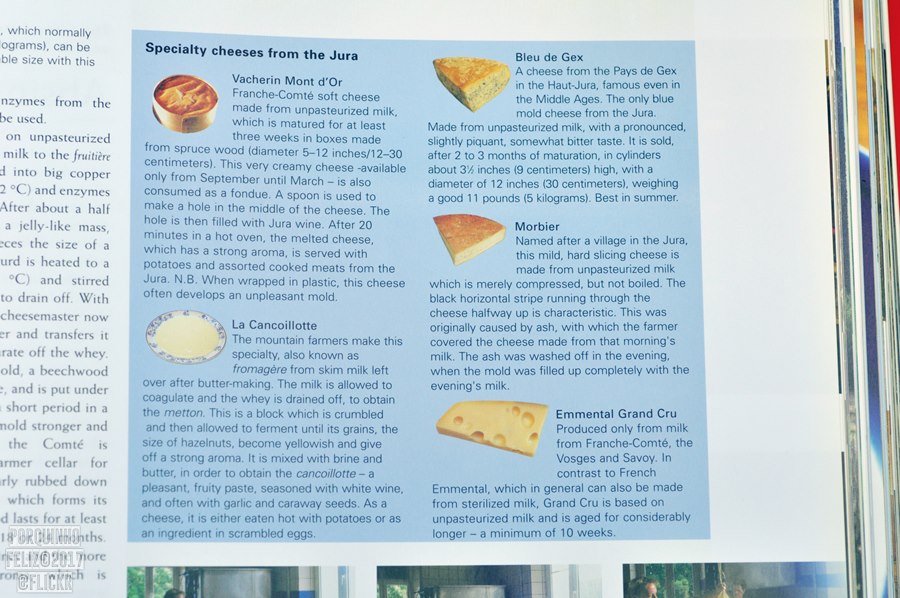 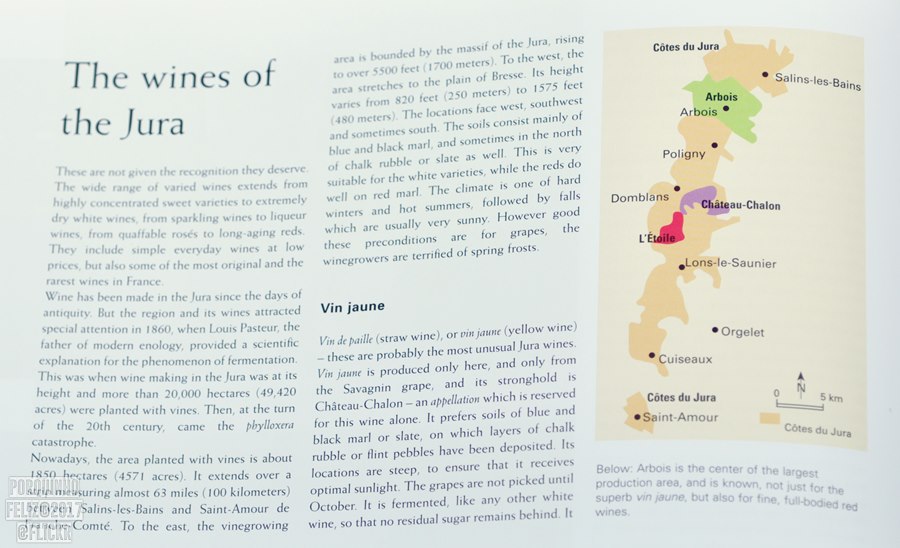 Just look at the beautiful food words for Lyon! 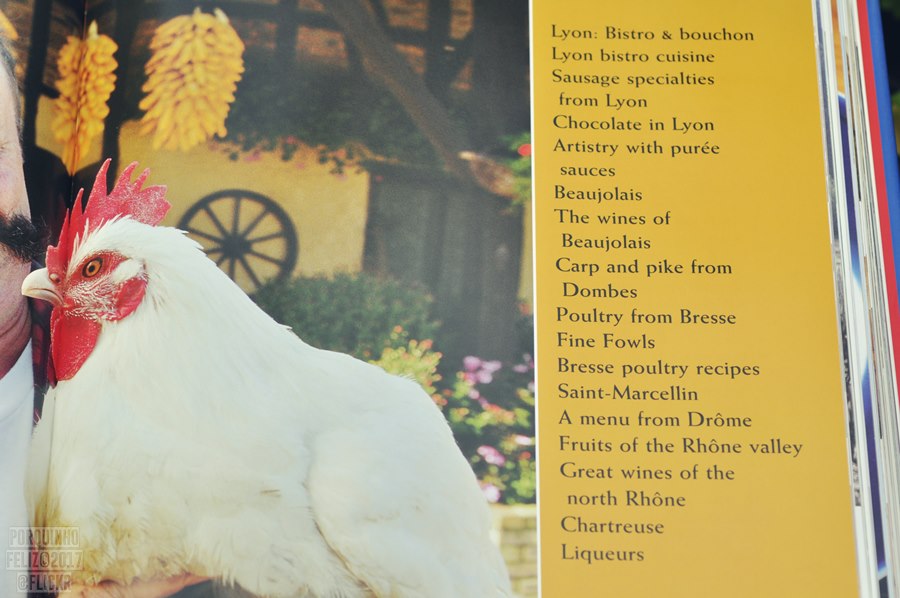 Omg, look at the sausages. 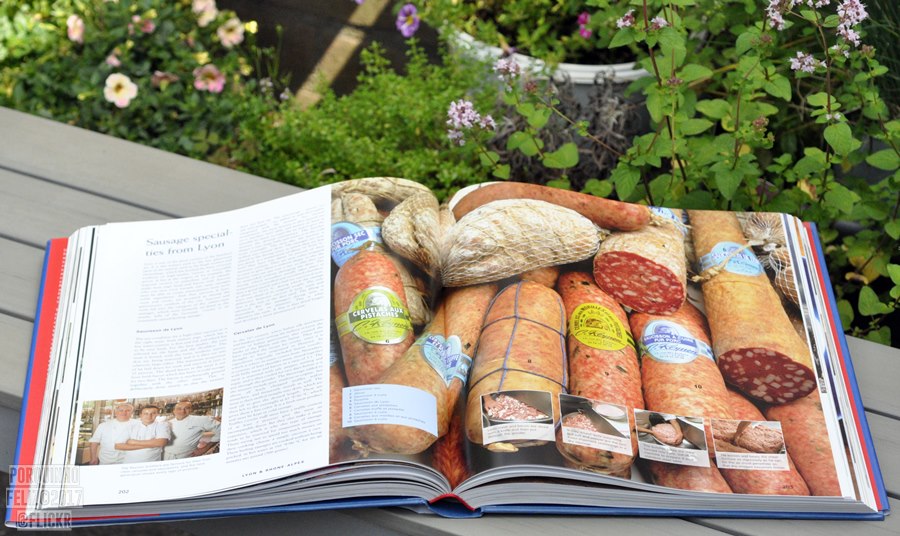 A fantastic book. Publisher no longer exists but the used books can be found on the web, I’m sure. 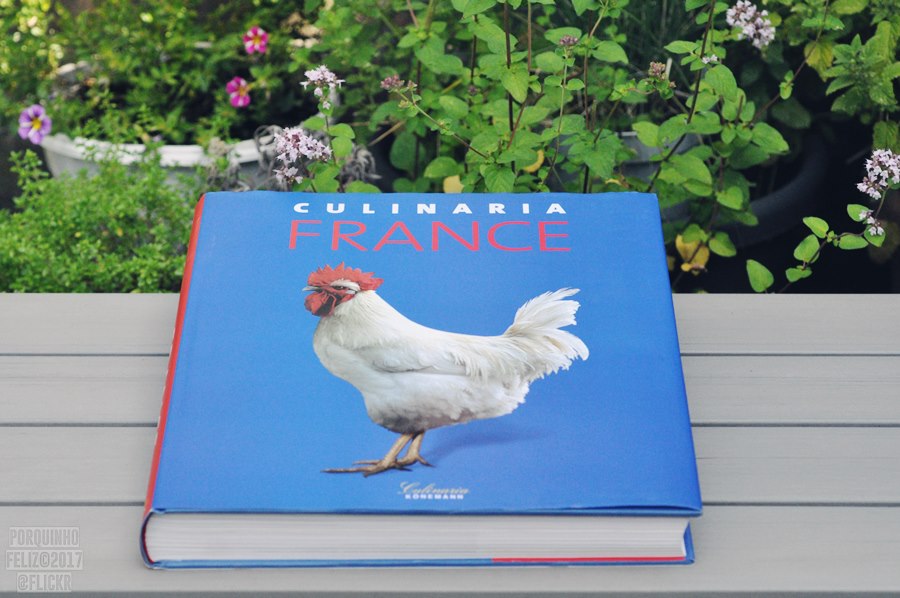 we are not drivers

I would be a little wary of recommending Arbois to anyone not driving.

We chose it because it was nearish to Lyon (and we had already explored other local areas in the past). I find public transport in France to be excellent in cities and between cities but fear you could be trapped without a car in somewhere as small and rural as Arbois…it has very few shops and quite a limited restaurant selection.

I think Lyon would be a more rewarding food experience given its size and food reputation and its on the main TGV line so easy to use it as a base to get to other cities in the area.

There’s a local bus that goes to Arbois from Lons-le-Saunier. The bus there from Geneva takes about 2.5 hours and the route is scenic. We have decided to stay in Lons-le-Saunier a few days before heading back to Geneva for the flight home.

Can’t possibly fit any more holiday this expensive year (4 in total). Looks like we will make this trip next spring! Lyon deserves its own trip. It’s a huge place and we prefer small towns (that’s the main reason we will never go back to Paris).

Curious, why don’t you fly to Lyon and then you can travel everywhere with the local train.

For national train use the site: 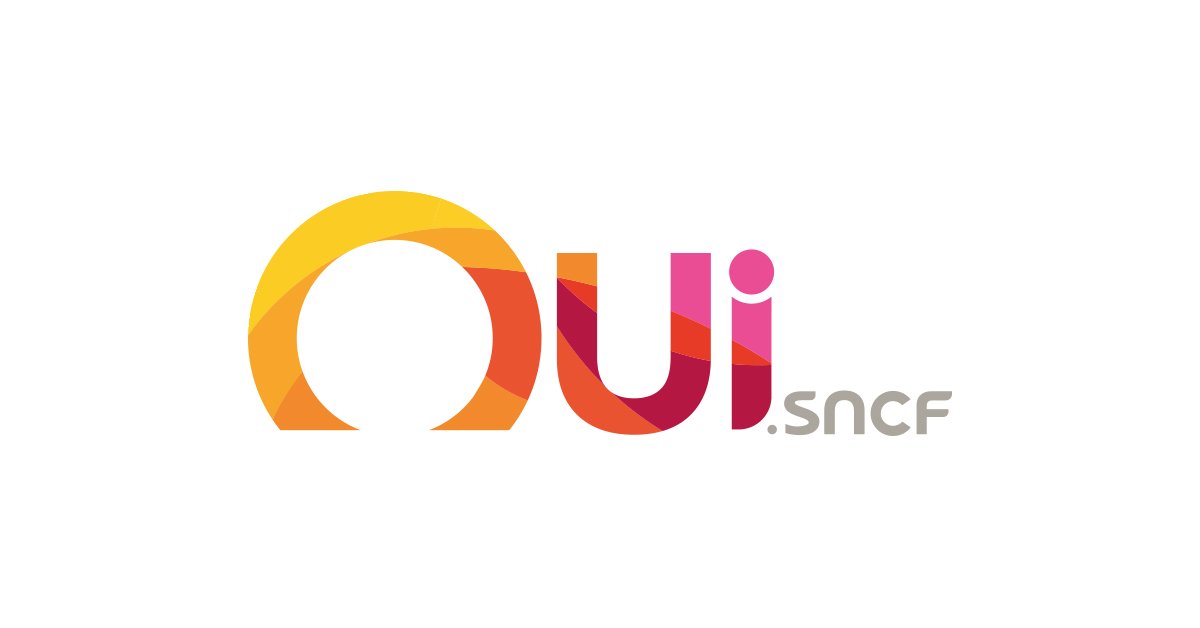 I know. But I have to go all the way to like Brussels to fly to Lyon. Brussels is half way to Jura. The bus to Lons-le-Saunier costs eur.9.

The bus to Lons-le-Saunier costs eur.9.

Wow! That’s very good price! I don’t think I can find anything to beat that!

Rent some bikes, it can be useful between villages.

and we prefer small towns

I agree - but I wonder if Arbois is more of a village than really a town and thus somewhat limited. We struggled for picnic supplies one day as the only cheese shop had closed and the butchers had fairly average selections of charcuterie. I think there is a ver small weekly market but its nothing like the vast markets we have seen in the smaller regional towns.

On my next visit I will aim for a small town with a decent market and a good selection of shops, restaurants etc.

They have supplements for dishes like foie gras and their Bresse Chicken with Morels and vin Jaune (€7).

Here are a couple of pictures - the casserole was a 2 person portion, but as you can see from the plate it was generous. 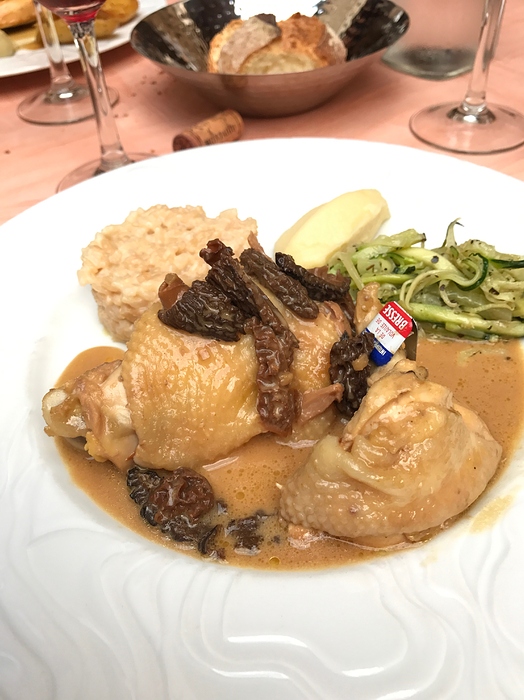 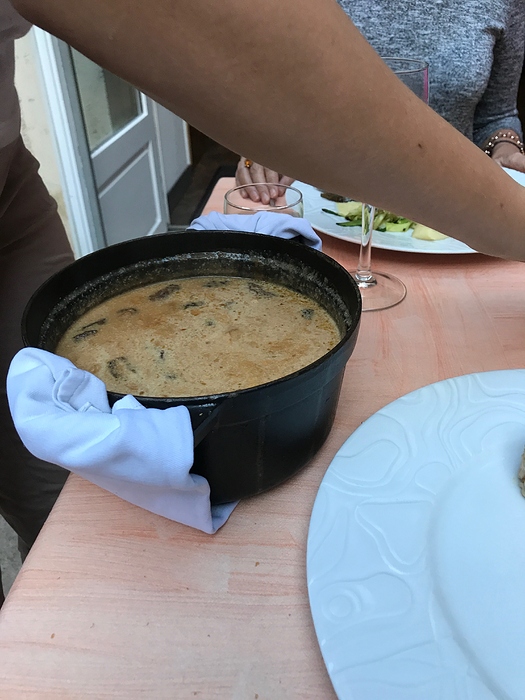 We are not dead set on Arbois, but now you are saying it’s hard to get provisions in this village then it’s only logical to visit as a side trip by bicycle or local bus. I will do more research on where to base my stay.

If possible please post more photos of your meals. The 2 above look so yummy, and even served in a Staub cocotte.

@PhilD I was just reading Le Monde, about the lowering of quantity of wine production, about 17% less when compared to last year production due to the spring frost, notably the wine regions from South West (Bordeaux), Jura, Charentes and Alsace.

Did you have some first hand information on this when you are visiting Jura? What did they think of the quality of wine this year?

Overall they are saying the 2015 is the superb recent year and the last of it is starting to sell out - the 2016 is starting to be release wines and and from out tasting isn’t as good - although we are far from expert on these.