Anyone know a great recipe for pork butt--maybe Mexican green chili? Or Asian?

Are tomatillos available in France?

Fresh? I haven’t never seen that.

My “go to” method for a whole shoulder roast is to season with salt, pepper and garlic slivers, put in roasting pan with an inch of wine/broth, then into a 450°F oven for 15 minutes, then DROP TEMP to 275° and let cook for 6 or so hours. I usually put it in the oven just before going to bed and take it out around 7am. Fork tender, to die for juices. Leftovers can become pulled pork, carnitas, green chili, etc.

For a party, I’ve thrown in 2 or 3. Really easy crowd pleaser.

I’m a fan and a convert ever since moving to Arizona long ago. How about any tasty recipes, traditional or improvised, doesn’t matter to me. Let’s have at it!

From a few years ago…

Are you cooking indoors or outside? If outside what are you using? This will help me narrow it down a little

Thanks. Indoors–indoors in Indiana and February. Also the cut I have is marked “Boston Butt” and doesn’t appear to have significant skin on it, but I haven’t opened it yet to see what’s underneath. Described as "semi-boneless. About 4.5lb…

See lambchops #2. I’ve done them so many ways and here is the easiest method that you cant mess up. The meat flavor will shine through and not be overpowered. It doesn’t get any easier.

Step 1) put a generous amount of adobo and rub it all over the butt.

Step 2) see step one and now put that exact amount on again. Lol (I am serious though.) It will look like you are almost ruining it but don’t worry. The bark gets mixed in with the rest of the meat when pulled.

Step 3) bake at 250 for 8 hours. Put it on at night and wake up to your house smelling like a Puerto rican picnic! You can broil if desired or crank the heat for the last few minutes.

Brining it is always a good call but you don’t have to. They stay juicy and are super hard to overcook.

There is my one ingredient pork butt recipe. Of course you can jazz it up. I like pepper and Dominican oregano on there too. Lime wedges are usually on my plate too.

Ps, you can make chicharron with the fat/skin!

Boston Butt typically does not have skin , just a layer of fat.
If you are serious about fantastic pulled pork , Amazing Rib’s founder, meathead has the best recipe for pulled pork using Boston butt. I typically smoke it but his recipe can also be done indoor. I usually follow his instructions, from trimming off except 1" of fat, leaving 1", dry brining with kosher salt the day before so it can penetrate the meat, then rub it with peanut oil and then his Memphis Dust ( I make a lot of it at a time). I also butterfly the butt so I can use my rub in between
Typically, I smoke it for 14 hours, use 's combination of Stubbs BBQ sauce as well as N Carolina vinegar sauce but it is great unadulterated .
The taste unadorned and unadulterated, hot from the smoker, is unmatched in the culinary world. It is the quintessence of porkdom. Serve it naked, Then, if they wish, a splash of Stubb’s BBQ sauce or North Carolina’s vinegar garlic sauce
I also provide coleslaw for those who like that with a slider potato bun as well but most of t he time, my guests just gather around and pick the meat as I am clawing it.
.Meathead’s book has been credited as top 100 cookbook by Southern Living.
look.
Here is his recipe https://amazingribs.com/tested-recipes/pork-recipes/perfect-pulled-pork-recipe
He also states you can do it indoor if you do not have a smoker.

the cut I have is marked “Boston Butt”

How does Dominican oregano differ from Italian and Mexican varieties ?

Dominican is kind of pungent…maybe skunky? (Or is skunky a term restrcted to the “other” famous herb?

It’s maybe like comparing a Marlboro medium to a red, or a lighter breakfast blend coffee to medium body one…not much difference but once you acquire a taste for it you can tell slight differences easily. Same goes for liquor/beer imo.

Check this out. I just found it while googling the topic 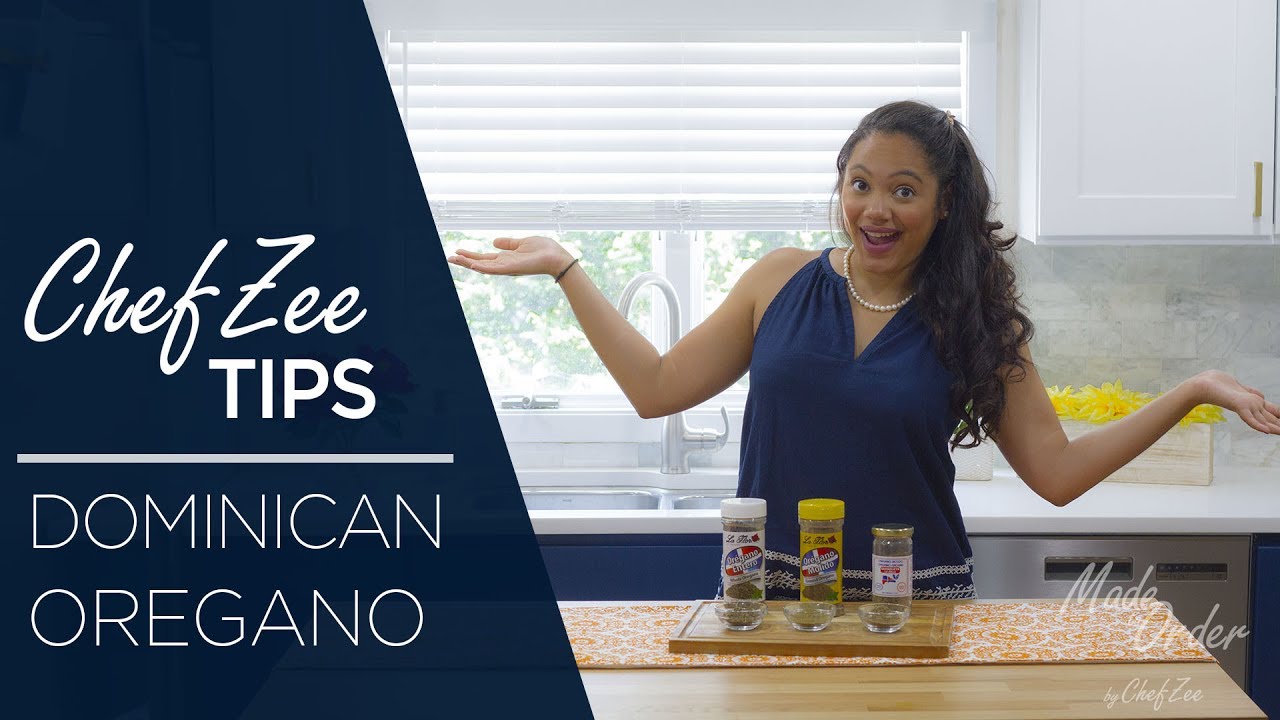 Will post my much used and adapted chile verde recipe with my changes later today. I use no other, I typically brown the chunks of meat but they’re excellent grilled a bit first too.

Would you use Dominican oregano fresh?
I have wondered about trying epazote, if they have it at my Mexican grocer. Never used that before.

I tried this cochinita pibil recipe from serious eats and really enjoyed it, but it was quite a project. 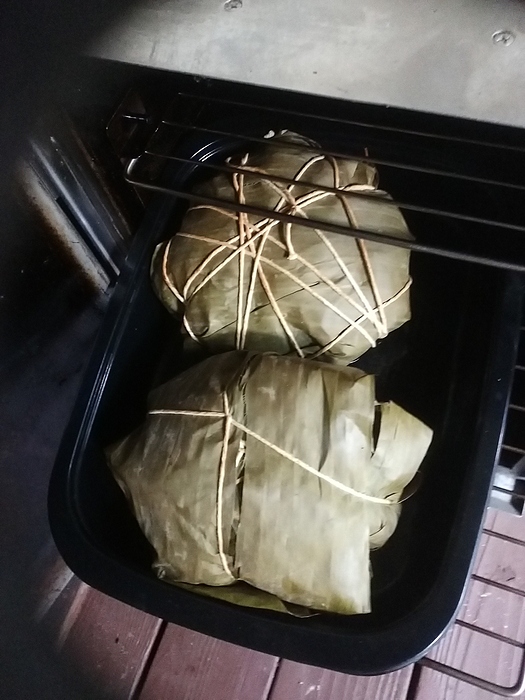 I’ve been wanting to try Turkish oregano and found this, comparing different types.

In Chowhound’s good ol’ days, many people raved over what was called Will Owens’ pork roast. I never made it, nor did I search intensively for the link, but here’s something I just found that was presented as a version of it. (I THINK the original was done low and slow in the oven - 250°F, an hour per pound.) The liquid smoke plus kosher salt and a rest in the fridge are definitely key to the WO dish.

"Trim excess fat from outside of Boston Butt Roast
stuff about half head of garlic into slits in meat
put 3-4 tsp Liquid Smoke on outside
sprinkle with all the black & crushed red pepper, salt, onion & garlic powder you can stand
cook in crock pot/slow cooker at least 6 hours

I cook it till it falls apart when touched with a fork. Use two forks to pull it from the crock pot and shred it.

Someone asked about where his girlfriend is in Mexico. She’s in Playa del Carmen, kind of Mexico’s Riviera, in the state Quintana Roo.

Thanks for all the tips so far!

I’m working on some pork belly. 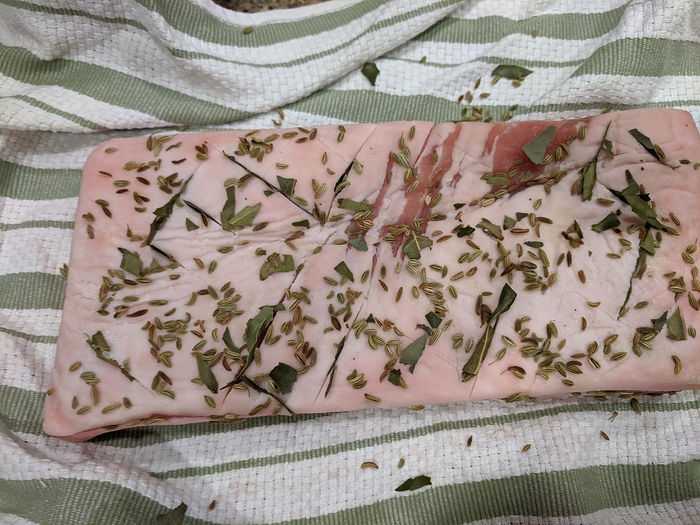 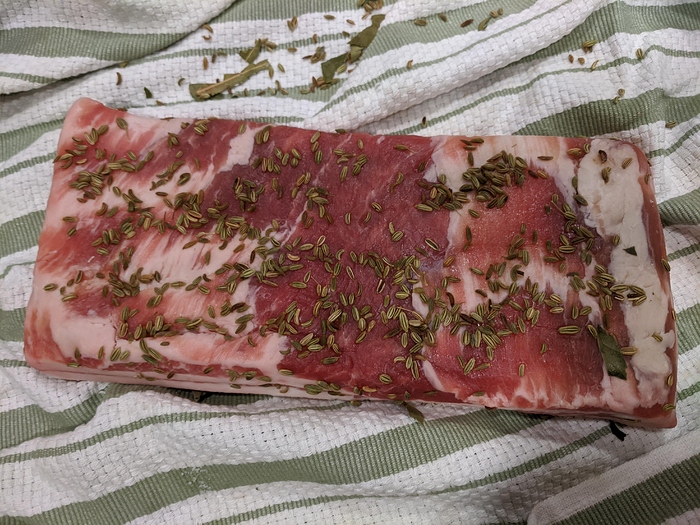 this has been my go-to for carnitas. it says pork shoulder but i flip-flop between that and pork butt. i also play with the amounts of all the ingredients:

put everything in a pot, boil, turn down heat to vigorous simmer

cook over medium heat for 1.5 to 2.0 hours, stirring, until all liquid is gone and only fat remains. you may need to take the lid off at some point so the water all dissipates.

I often stop here, after shredding, but sometimes go on to this:

preheat oven to 375. Transfer the pork shoulder to a large baking sheet, reserving the cooking liquid. Use two forks to shred the meat. Drizzle with a small amount of the reserved cooking liquid and lightly season with salt. Bake the pork in the preheated oven until browned, about 15-20 minutes, drizzling more of the cooking liquid on the meat every 5 minutes or so, tossing and turning the meat. 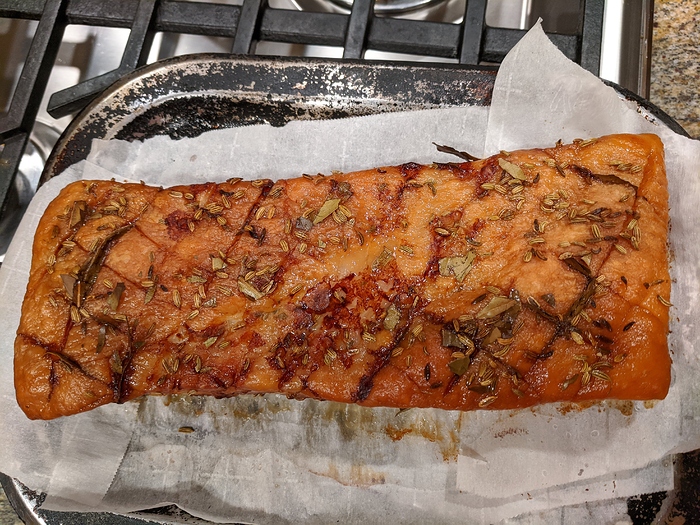 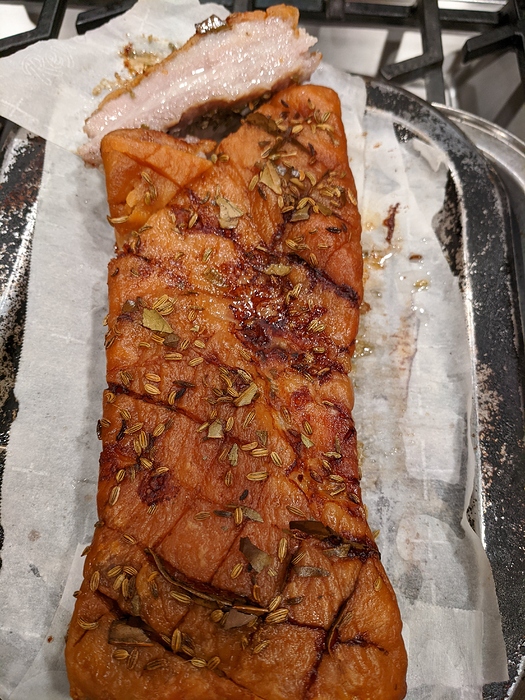