Any Eggplant Lovers Out There? If So What Are Your Favorite Recipes?

Just wondering how many eggplant fans out there. It doesn’t get a lot of love, but is one of my favorite foods. We use it in moussaka, pasta sauce, baba ganoush & many other ways. I will pretty much use only Asian eggplants, as I’ve had too many Globes that remain spongy even with long cooking times.

How about you - what are your favorite ways to use it?

This week I cut eggplant into planks topped with olive oil and thick balsamic glaze and roasted them for sandwiches.

Sounds delicious and thanks for the idea.

Yum to everything. Eggplant is too often dissed. We eat eggplant most in late summer and early fall, when I can get my mitts on the freshest. Other ways:

Babaganouj is one of my favorites, and there is also a sort-of-babaganouj recipe in Ottolenghi’s cookbook “Plenty” that is also excellent. Usually in the summer I grill eggplant slices brushed with olive oil and either eat them just like that, or use them in a grilled vegetable salad with feta, chickpeas (or not), grilled onions, lemon juice, and whatever else I feel like throwing in. The base recipe for that one comes from the New Recipes from the Moosewood Restaurant cookbook, but I’ve been making it for decades and put in whatever strikes me at the moment.

One of the few Chowhound recipes I ever tried was for pasta sauce using tomato, onion, red bell peppers, and eggplant. It is excellent. I never followed it exactly. I used a mandoline to make long shreds of the eggplant and thin rings of onion and pepper. Sometimes I included mushrooms. Cooked in canned crushed tomatoes, the result has a meaty mouthfeel. Of course you use whatever garlic, herbs, and cheese you’d include in your standard spaghetti sauce.

Then there’s Deborah Madison’s Stir-fried Roasted Eggplant, from Vegetarian Cooking for Everyone. It is addictive and versatile. Hot over rice, warm or cold as a side dish, as a bruschetta topping, or as a filling for crepes and omelets. Some of the ingredients are specialty items but I’ve subbed standard pantry cousins, no problem. How the hell have I not made it recently? Must remedy that!

We love it in ratatouille.

Love it every which way. I always cook it on the bbq in the summer. Goes well with lamb and tomatoes. There are several ways Chinese cook it. Check out those recipes if you want something that’s not Mediterranian for a change. 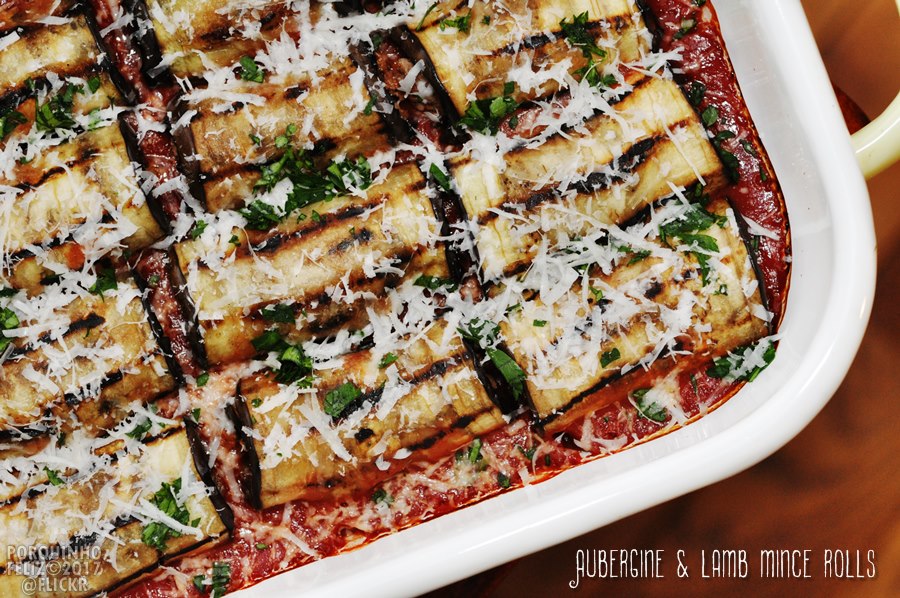 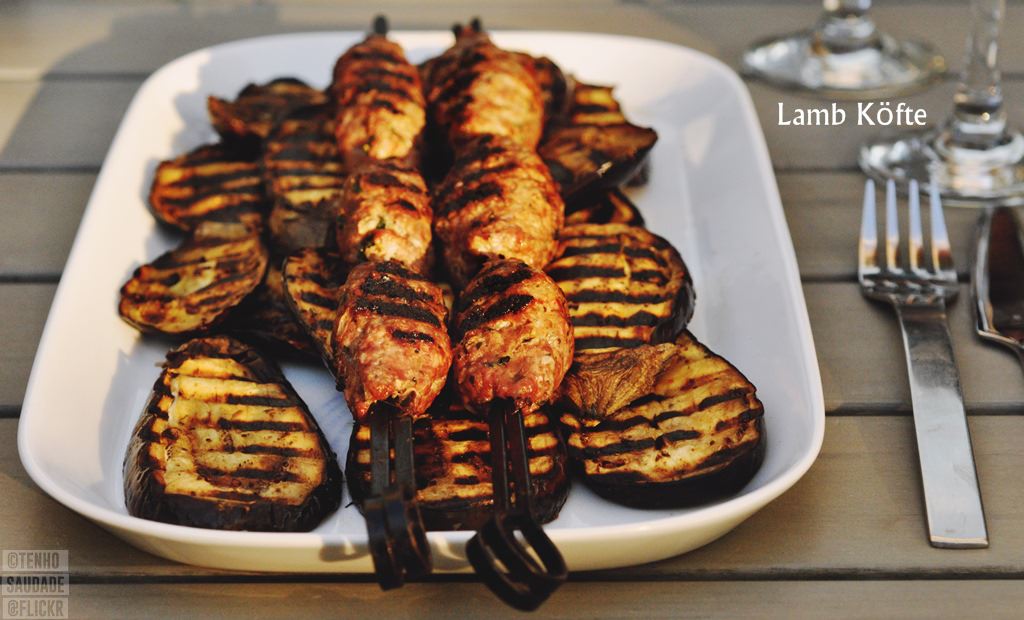 Your eggplant pasta sauce sounds almost identical to one I make, but I put in a green or colored bell pepper. Thanks for the mention of DM’s stir fried eggplant - it’s what’s for dinner if I have everything I need or reasonable subs. I have rather extensive pantries. Sometimes friends stop by for items they know I probably have when they don’t want to make a store run.

I’ll let you know how it turns out.

Maybe my favorite way is to pretty much copy Cavatappi Affumicati from the New England restaurant chain Papa Razzi, with a little balsamic thrown in for good measure. It is pretty much as follows:

Cook cavatappi according to package directions.
Dice plum tomatoes into smallish cubes and marinate with crushed garlic, balsamic, olive oil and salt to taste.
Meanwhile, cut eggplant into 1" cubes, salt generously and saute or roast at a high temperature until softened and lightly browned.
Toss eggplant and tomatoes, including exuded juices, with cooked cavatappi, smoked mozz and parm or romano to taste. Adjust salt and pepper and toss with basil. Serve with additional grated cheese on the side.

I love it grilled, and i do love babaganoush. Oh, that miso eggplant thing at japanese restaurants is a favorite. I don’t cook it much at home, just not a veg that i crave, i also prefer the long thin eggplant and those aren’t very available in my neighborhood

OMG, the DM eggplant stir fry recipe was fabulous! The only sub that was made is we used toasted sesame oil rather than roasted peanut oil. Served over rice & garnished with scallions. Think I’ll try all of her eggplant recipes - she is so gifted with flavor combinations. Every soup recipe of hers that I’ve tried is nothing short of fabulous.

Sounds delicious & cavatappi is one of my favorite pastas. Thanks for writing up your recipe. Will give it a try soon.

Japanese eggplant halved length wise . Cut slits into the flesh and stuff with a breadcrumb mixture of garlic and parsley. Saute with stuffed side up . Finish with Parma cheese and olive oil. A little anchovy in the mix works wonderful.

A local Chinese restaurant that has since closed had an eggplant dish that I loved. I have often tried to replicate it, and now I’m pretty close:

Peel the eggplant, slice it very thin and toss it into a pot with a bit of soy sauce, water, Chinese rice wine. The dish is supposed to be wet, but not swimming in liquid. Cook on a low flame for about 90 minutes. At the half-way point add more garlic than you think you can handle. At the restaurant the dish had a strong garlic taste, but there was no visible garlic. I imagine that they added whole cloves and fished them out before serving.

My kind of a dish…and I use the same recipe… almost except I use a 14 oz can of diced tomatoes… instead of your plum tomatoes cut up…but I am sure the results are the same…I do not often have smoked Mozz…but put in fresh mozz…again perhaps the same results…perhaps you and I should have a “thrown down”…NOT>>> just kidding!!!

We make an eggplant parmesan/pork dish. Slice peeled eggplant/dip in beaten egg and dredge in Italian breadcrumbs. Fry until golden. Drain well on paper towels. Same for pork cutlets. Put some spaghetti sauce in baking dish. Layer eggplant, pork, eggplant. Cover and bake at 325* for half hour. Then top with mozzarella or provolone, cover again for maybe 30 more minutes. Uncover if you want it crispy.

Also, I’ve tried leaving the skin on eggplant in various cooking methods because of the health benefits but I just can’t get use to the texture.

A local Chinese restaurant that has since closed had an eggplant dish that I loved.

Possible to see a photo?

One of my favorite eggplant dishes was a special that I had at Drew’s Bayshore Bistro in Keyport, NJ over a year ago. It was a seafood stuffed eggplant boat. It consisted of a crispy fried panko breaded half eggplant, that was gutted, and stuffed with a crispy crawfish & crabmeat stuffing, with delicious sauteed shrimp, & a Cajun sherry cream sauce. I had them put the sauce on the side so the eggplant would remain crispy. The pictures don’t do it justice. 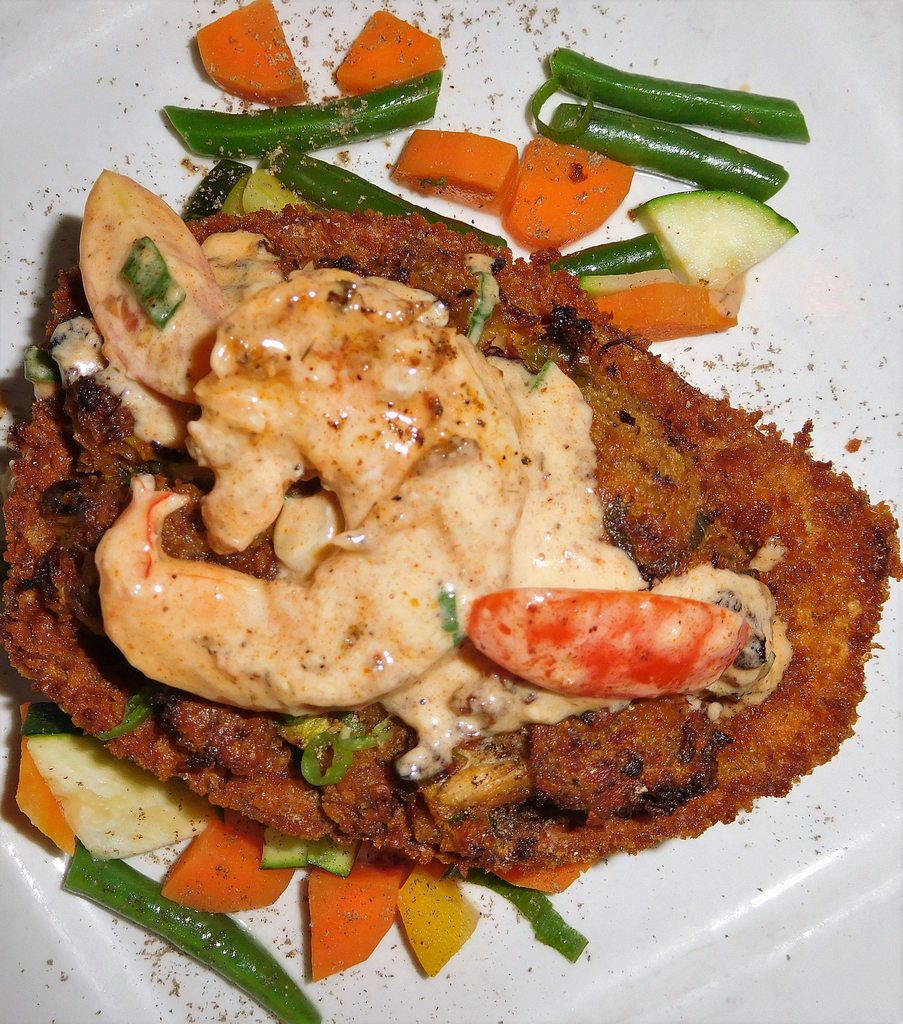 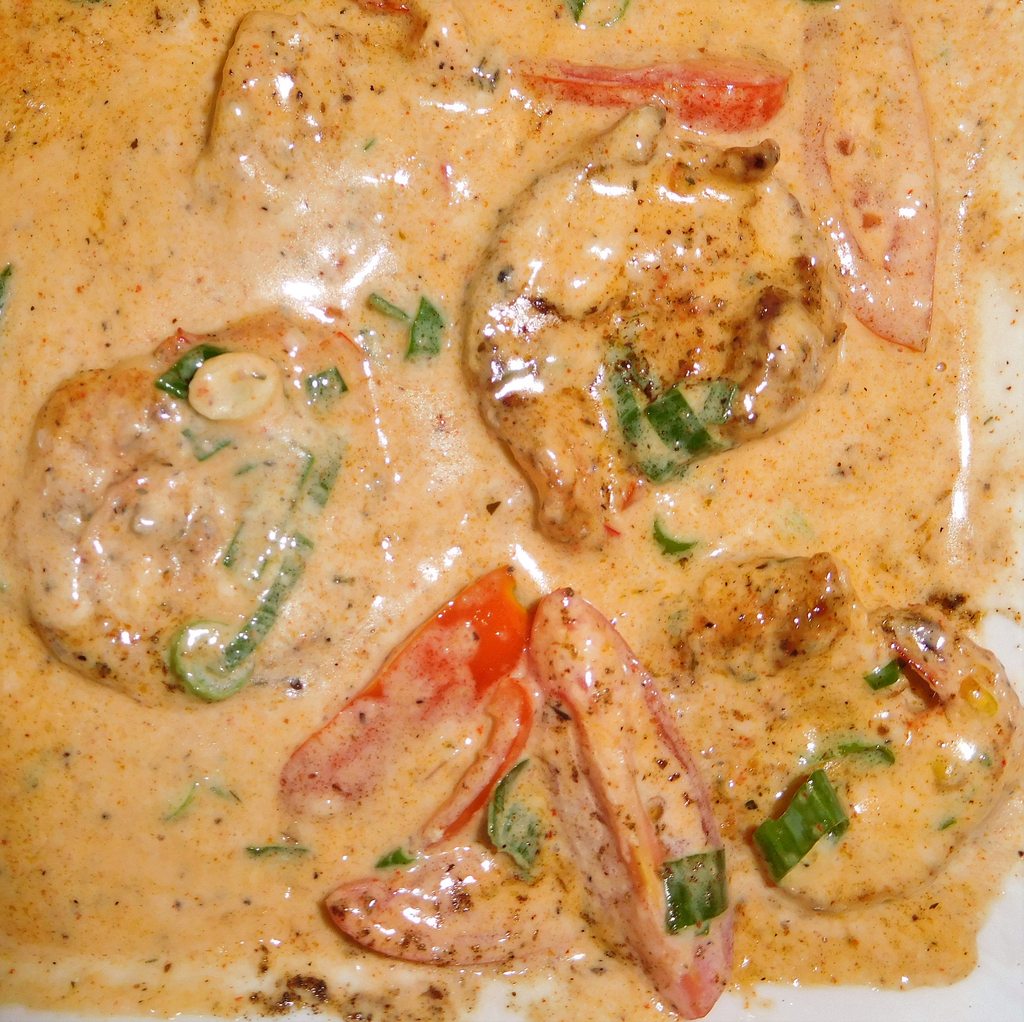 Is this the recipe…?