I honestly have no idea which region airline food might fit into (maybe create another forum category), but I guess this is the closest section. And I figured just the airline for the region would be a good starting point for any others that want to chime in on their flights.

The only caveat about airline food is that I think we should all agree upon is that its not exactly the most delicious and you probably shouldn’t base a flight on the food (well maybe if you flew something above economy…).

Per my amusement, I shall bring a few pictures I took while I was flying from SFO to HKG on economy.

As the San Francisco flight that I took was a night flight (departing around midnight), we have only a light supper and breakfast for our meal choices. Supper is usually served around an hour into the flight and breakfast was about 1-2ish hours before landing. 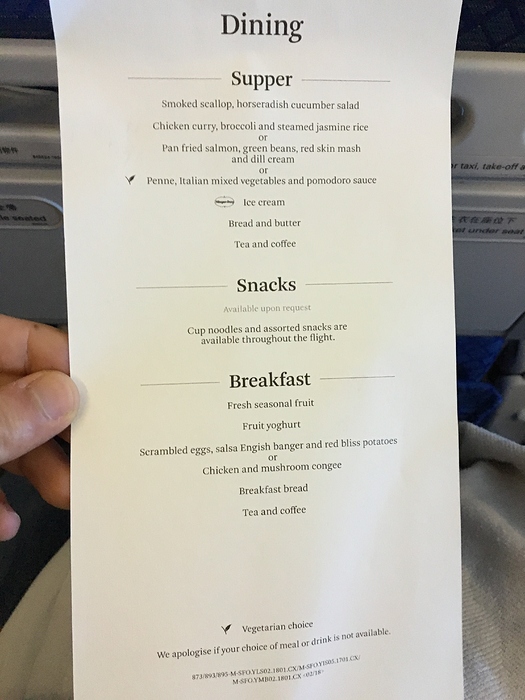 I typically try to go for the respective carrier’s cuisine (say UA for more American items) but I am not a huge fan of curry so I decided to go with the pan fried salmon, green beans, and the red skin mashed potatoes. 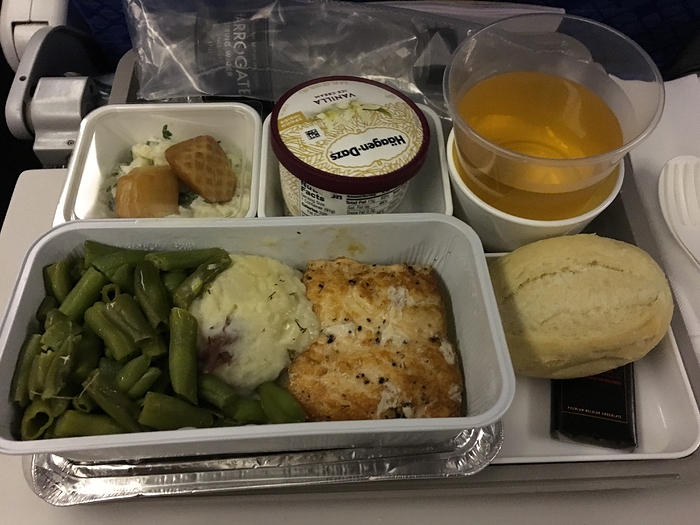 The potatoes were uhm… mashed into a puck but was somewhat edible. The green beans were a bit bland but the salmon was actually relatively good (it wasn’t completely dry). I actually liked the smoked scallops with the cucumber salad. The bread roll was warm so as far as that goes, it was decent. The Haagen-Daz ice cream was quite nice and they even included a little block of chocolate for our meal. 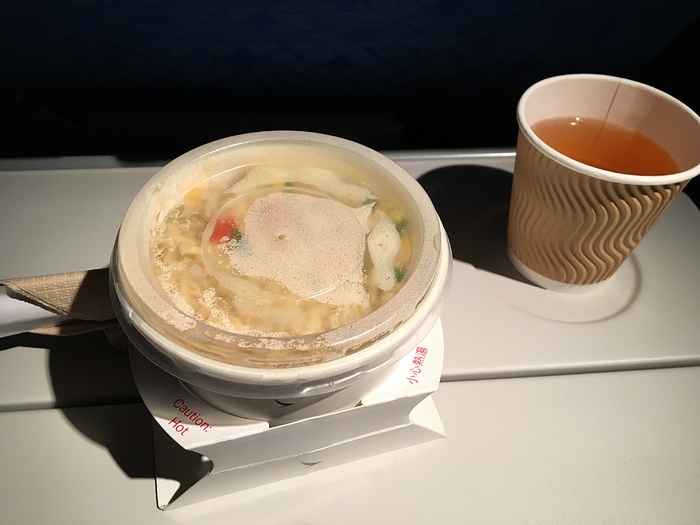 But one of the best things on Cathay is their little cup noodle snacks. You can pretty much order them whenever you feel like, but the cabin crew did come around with them in the middle of the flight if anyone was still a little peckish. If you wander around the cabin, snacks were also provided in the galley areas. 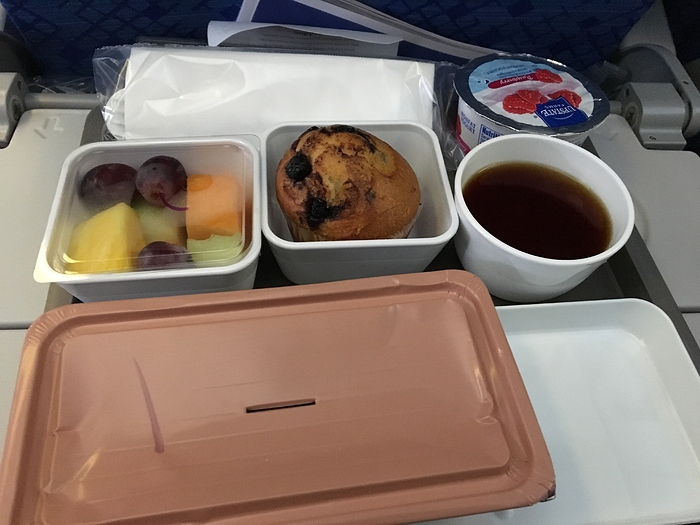 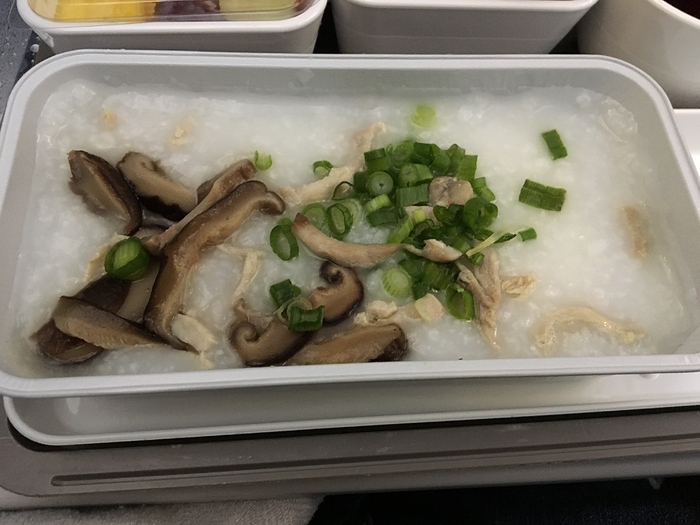 For breakfast, I went for the chicken and mushroom congee. The congee was actually quite nice for an airplane breakfast, a little salty but nothing that would disturb your stomach and it was served piping hot. The muffin was a blueberry muffin and well was rather cakey. The honeydew was fairly sweet considering I was flying around March and the strawberry yogurt was well yogurty?

Overall I can’t quite say the meals were stellar but I’d still say quite edible on my Cathay Flight.

Bonus item to buy from their in-flight catalog: 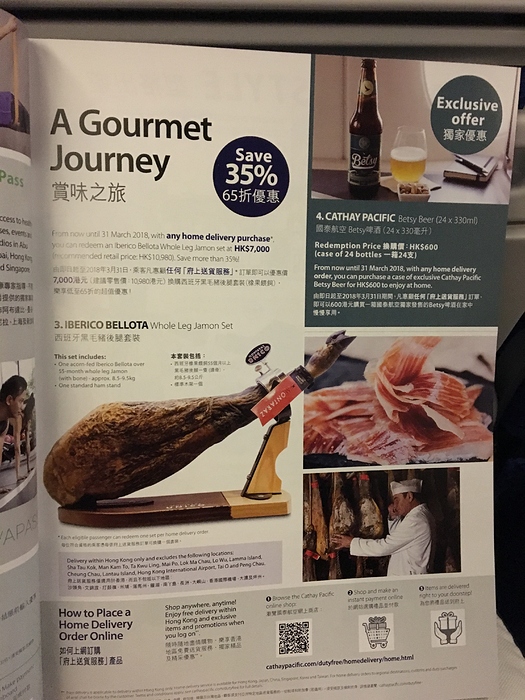 There’s a thread but I can’t remember what it’s called now. Anyway, am also flying Cathay after the summer (from Europe). Looking forward to the “wallpaper paste” AKA rice porridge. They serve it on internal flights in China, plain porridge with preserved vegs.

I’m more interested in the craft beer. I have a connecting flight at HKG, might try to find it whilst waiting.

I’m more interested in the craft beer. I have a connecting flight at HKG, might try to find it whilst waiting.

I don’t recall if there was a drinks menu given (I probably forgot to take a picture) but there was a small selection of alcohol. I do recall red/white wines were offered during meal service and I’m pretty sure there was a beer but I cannot recall the barnd.

There’s a photo of the beer inset (menu). I’ve seen photo of this beer taken by someone drinking in the business lounge (HGK). In your photo of the menu it says the beer is to be delivered to your address, but if they serve it on the plane or if I can get it at the airport I would check it out.

The congee was actually pretty nice compared to the other fuller meal (and as far as airline food goes), because its pretty difficult to mess up congee. and its properly seasoned.

The main meal was rather salty. To me, even though taste perception is duller at altitude, it seems they overcompensated.

The chocolate I recall is single origin. Its a step up compared to mass market chocolate like Hershey’s, but it isn’t comparable to proper single origin chocolate. But its a decent touch for airline food.

Well, then one would have to finish the entire 9 lb jamon right there then LOL if they don’t deliver. (I am sure they thought through all of this by now and this scenario just won’t happen.)

I still remember Morocco customs didn’t let us bring some of our own fruits into the country. So we just ate them all at the customs.

There’s a photo of the beer inset (menu). I’ve seen photo of this beer taken by someone drinking in the business lounge (HGK). In your photo of the menu it says the beer is to be delivered to your address, but if they serve it on the plane or if I can get it at the airport I would check it out.

Oh! The Betsy beer thing. That I really don’t know.

Well, then one would have to finish the entire 9 lb jamon right there then LOL if they don’t deliver. (I am sure they thought through all of this by now and this scenario just won’t happen.)

Ha! Just have a picnic right before customs

It would be a crap shoot. I’ve only had my bags checked once at SFO that I can recall in a dozen returns from China and Hong Kong, but happened to be the one time I had some Jinhua ham in my luggage. It was just after the new International Terminal opened and they were testing the secondary agricultural check point. I claimed my BIL had slipped it in there without my knowledge, but they weren’t buying it. $50 fine payable on the spot. .

You’re better off buying it domestically through Iberico Club. 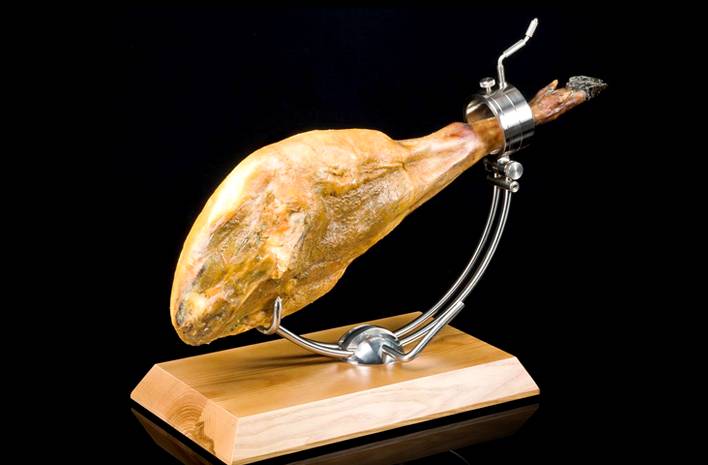 The Finest Jamón 100% Ibérico de Bellota in the USA

Wow, I didn’t think they were able to import the ham into the United States. Is that a recent thing now?

I’d be interested to know why not. Its not substantially different from jamon iberico.

I thought most meat products were banned in the US:

But maybe some things have changed?

Oh, I thought you meant import, versus bringing in via luggage.

Well either, haha. Then again I did have a few slices of Jamón Ibérico de Bellota at Bazaar meats last year at the SLS LV restaurant. So I guess, we are allowing imports of jamon?

But since @Souperman brought up about the jinhua ham, would the closest approximation to jinhua ham be Virginian ham though? Since I can’t really recall seeing jinhua ham at any stores in Chinatown.

Cathay’s food offerings seem to be getting worse each year. However compared to U.S carriers, it’s like Michelin 3* cuisine.

Cathay’s food offerings seem to be getting worse each year.

Haha even though it seems to be getting worse, as I live in the US… I’m happy to get any food lol. I recall getting a little hot pie snack from my flight from Taipei to HKG on Cathay and thought it was quite decent compared to uhm… beverage service in the US (if I’m lucky I might get peanuts!)

It can be imported into the US if it is processed in a facility comparable to one in the US, as certified USDA’s Food Safety Inspection Service (FSIS).

Costco has Serrano ham from Spain, as well.

One market (I think it was May Wah before they deserted Chinatown) used to have whole legs of Smithfield ham hanging above the counter.

Meats are not importable from China because they do not have USDA/FSIS approved processing facilities.

Its true I remember Cathay’s food 4 years ago was a lot better than this year’s. Must be all the cost cutting.

After the $50 fine, did you get to keep the Jinhua ham? Or someone else ended up with a big feast?

Someone may have gotten a surprise at how hard and salty it was. It’s really as much a condiment as a food.