2020 NYC Restaurant thread - where are you eating out these days?

I see lots of NYC folks responding to queries from visitors, but little discussion of restaurants the rest of the time.

Curious to see if I’m the only one who misses this discussion - social media, Yelp, and the many review and listicle sites aren’t really a replacement for conversation.

So, NYC folks - where are you eating out these days?

(I’d suggest adding location if you mention a restaurant, so it shows up more easily in a search - standard tags - UWS, LES, EV, WV, and so on)

I’ll kick it off.

MOMOFUKU NOODLE BAR @ TWC
(UWS/columbus circle/midtown west)
Mostly good food - the dover sole is “bargain” priced ($45?) relative to other places and done very well. No sides though, just served with two types of hot sauce and scallions. The lobster hozon pasta is delicious, and generous with the lobster. Vegetable sides vary in quality - I didn’t love the carrots, the potatoes were good, and a couple of the specials have been good. I like the “Stuffed Dip” better than the “standard” buns - same dough, stuffed with something (varies).

BANG BAR @ TWC
(UWS/columbus circle/midtown west)
Next to noodle bar. Wraps with house made bread that’s reminiscent of a paratha. Love it - I prefer the pork to the chicken, but both are great. I think the bread is what’s special here, but they also have rice bowls with the same toppings. The eponymous wrap reminds me of a kati roll, in the best way.

PIGGYBACK (from Pig & Khao team)
(Penn Station / Chelsea / NoMad)
Pan-asian food from a sorta-celeb chef (if appearing on food network all the time counts as celebrity).
Food was mixed - good intensions, but something got lost in “modernizing” or making it “fancy”. Also oddly priced. Green curry cauliflower was both tasty and clever, shrimp toast got lost in the presentation and overwhelmed by garnish (also you want crunchy bread, not soft bread), noodles were fine but not memorable, lamb rendang was weak in flavor and spice, duck was fine but again not memorable.

BOQUERIA
(Times sq, UES, Chelsea, midtown east)
The Times sq location is the newest and the one I’ve been to most recently. In a hotel and much bigger than the others. I was curious if the food would be worse for the larger format, but it’s as good.

I’ve made two visits to Ernesto’s (LES), which is unusual for me because 1) it’s expensive and 2) I have neophilia. But it’s in my 'hood, and the staff is very nice, and the food’s really good. The pricing’s all over the place though. These excellent shrimps on toast are a bargain at $10. 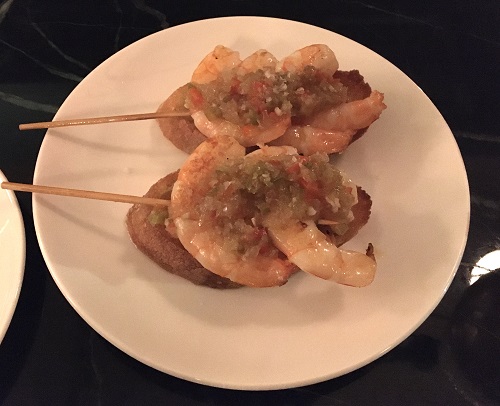 Meanwhile, these excellent artichoke bottoms in almond sauce are $18 (kinda worth it, though). 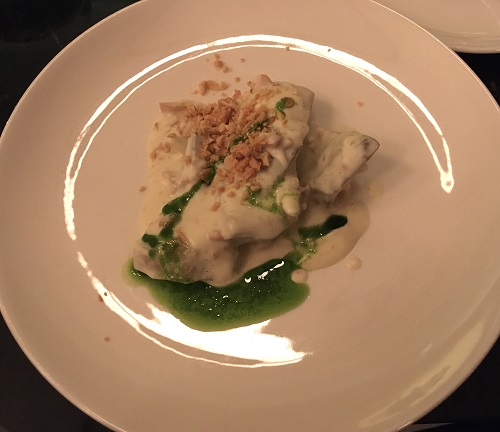 And because I apparently don’t care whether I go broke, I also went to Ushiwakamaru (Chelsea), a place I’ve had my eye on for years. I’m crazy about octopus with wasabi, but until now I’ve only had izakaya versions (at Decibel and like that). This was a big step up. And still only $5! 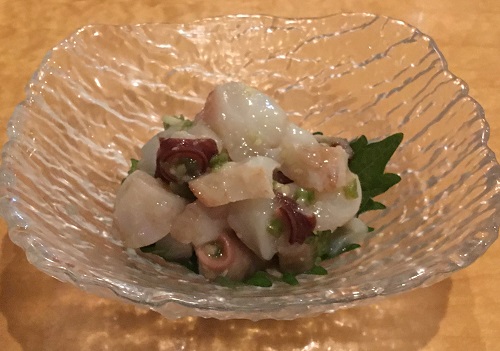 To make up for that frugality, I got some pricey nigiri - abalone, tropical prawn and fluke. 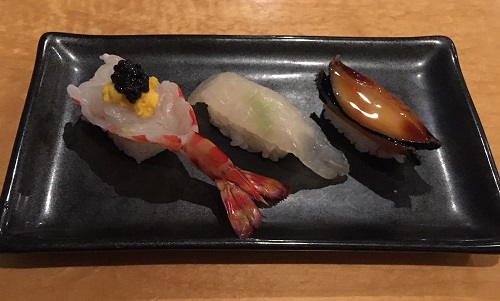 And what the hell, a negi-toro handroll. 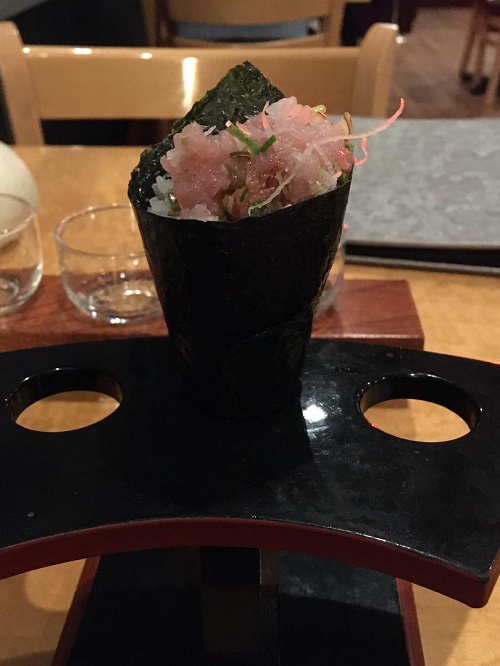 Ernesto’s is a madhouse (so far - maybe things will calm down once everyone’s been there), and Ushiwakamaru is an oasis of calm. I’d recommend both.

Well, after 25 years on food boards, it’d be somewhat redundant to talk about where we go most often, especially since we’ve become friends with many of the owners, chefs & bartenders over the years of repeated visits. But, since you asked, I’ll re-mention that we love Noodle Pudding in Bklyn Heights (we eat at the bar 1-2x/week), La Vara in Cobble Hill, Bacchus in Boerum Hill and Walkers in TriBeCa. Other very nice dinners have been had at Keens, Crown Shy, Aquavit, Villanelle, Wu’s, Joe’s of Ave U & Adda. Hey, we go out to eat a lot.

Didn’t mean this to be an inventory of everywhere we eat - in nyc we all eat out a lot.

Trying to foster some discussion and community here among locals - whether it’s around new places actually worth going to (listicles aside), favorites that continue to be or fall off, overlooked places, holes in the wall, or whatever else catches our fancy.

Not tourist talk, local talk. Most recent nyc discussions here are visitors asking where to go.

I was wondering about Ernesto’s…

It was! You can also get a sake flight, which was great for me, 'cause I like buffet-style drinking.

I love Alex Raij’s food - finally went to La Vara last year, and loved it so much it made me sad it’s not closer to me! I think it’s a different level than her Manhattan spots (even though those are so good).

On a less spendy front, I’ve had Kazunori on my list for ages - SugarFish’s handroll place - bec I quite enjoy SugarFish for a non-splurge sushi fix that’s slightly different than the usual.

Sorry about that. You mean, sorta like the way CH used to be or the discussions that still occur at times on Mouthfulsfood? Is there actually a separate local cohort here on HO to pull that off? I guess we’ll see - I certainly applaud you for trying & will put in my 2cents.

I am planning to hit Douzo in the near future - same concept. I wasn’t crazy about Sugarfish. It was fine, but nothing special. (I realize it’s not supposed to be special, but still.)

No apology necessary, and I hope you’ll participate!

Yeah, a real food lovers discussion of food. My friends indulge me by letting me choose restaurants (and often what we order), but their eyes would glaze over at some of the chats that we enjoy here, haha.

If you look through the nyc tag, you’ll see plenty of participation when someone pops up to ask for trip assistance.

There just doesn’t seem to a space to discuss normally. I think FTC has that for the west coast, but NYC fell into the cracks post CH drama, the surge in listicle sites, and so on.

Anyway, we’ll find out. We all eat out several times a week, it’s just a question of whether it’s interesting enough for us to discuss it - before or after.

I think SugarFish stuck for me because I ate there in LA a few years before it opened in nyc. It’s not special, right - but it’s a different style, good quality and flavor, and the price point is great for what it is. Also, GT is right across the street for cocktails and dessert, lol.

I eat out 400+ times a year but I’m down to 9-10 weeks in NYC.
Except for some PF lunches at upper end manhattan restaurants, most of my meals are at ethnic places in the Outer Boroughs. CH was great for that. There don’t seem to be enough readers here who care.
My favorites include:
Singh’s for Guyanese
Coatzingo for Mex
Little Pepper and Legends of Taste for Sichuan
Xian Famous Eats
Renee’s for Filipino
Awang for Indonesian

If/when you go back to Noodle Pudding, ask if Steve & Ginny are there &, if we are, say hello. We eat dinner at the bar 1-2x/week. If we’re not there, dropping our names (especially mine) will get you their special “friends of Steve R.” surcharge.

Lol, we sold our apt in the Hghts last year after living there 25 years. All the building and gentrification was getting far too crazy.

El Jefe: If I remember correctly, you’re the other person on this board who really likes Park Side in Corona? At any rate, Saregama seems hopeful that an Outer Boroughs (maybe even Manhattan) discussion board can be created here & I’ve always encouraged optimism. In that vein, I guess that there are at least 3 of us going to ethnic places &, if “eattheworld” cross posts a little here, maybe we do have something. I plan to hit Xata (Bellarussian place in Sheephead Bay, Bklyn) again soon & already have plans for lunch tomorrow at Taste Good (Malaysian in Elmhurst), so I’ll try to write them up and see. I’d also like to hear about Angel (Indian vegetarian in Jackson Heights), since the owner/chef was previously at Adda and was part of making them popular. For that matter, maybe I’ll belatedly post on Adda. Have you been to Little Pepper or Legends of Taste lately?