Had a business lunch and the client had picked this as the location. My first time to this chain, apparently the “theme” is burgers and booze. Calling themselves a Wind and Burger Bar it’s the latest and greatest in the evolving sit down full service burger joints. While the client mentioned this was their first time to this location, apparently there are others located in North Jersey as well, someone in my office said they are slated to open one in the Edison area.

Long story short…I don’t get the draw of these $10-$15+ burger places. I ordered the Turkey Sloppy Joe burger no fries, (which the burgers do NOT come with) and the turkey burger was “ok”. Its my bad for not realizing the sloppy joe would be ground turkey not formed into a patty instead just piled on the bun…taste was Ok, nothing offensive, nothing great. The clients enjoyed their burgers as well, but I just don’t understand the draw of the place. Obviously I’m not a big burger guy…so this entire concept is a bit lost on me. The business seemed to be doing well…I have no idea how long they have been open. They offer “American Kobe” beef as an upgrade and I think the menu said it was a $6. upcharge for the “American Kobe” beef substitute. So that places the burgers in the $15-$20+ range. ((shrugs))

They do have a ton of different burgers from a po’ boy, which has andouilli sausage in the patty and topped with craw fish and a spicy mayo…(one client had that and liked it, although they wouldn’t cook it less than medium well)

I won’t be back…but if you are in the mood for a burger and a brew feel free to check them out.

Wind=WinE for those who get tripped up…

I used to live all of 2-3 miles from here and went once, as I thought the same thing… It was fine, but expensive for what it was. I know there’s another one at the corner of Rts 10 and 202 on Morris Plains, but over there you can drive a mile further and sit yerself down at Arthur’s!!

I had put the wrong address in my GPS initially and wound up off Rt. 3 in a parking lot for a Hotel with a Harold’s Deli and Arthur’s Steak House in it? Is this the same Arthur’s from North Brunswick and Hoboken?

Yes it’s the same Arthur’s but it’s near the Morris Plains Zinburger, not the Clifton one… Sorry if I added to the confusion!

There’s a Zinburger in Boca that opened a few months back. I find them underwhelming. My burger was not seasoned at all the first time I went. The second time I had the diet burger plate which was fine. Both times our office was taken by suppliers so I didn’t have to pay.

I think they are overpriced, coworkers liked their milkshakes but $20 for a burger and fries has gotten out of hand.

A Zinburger opened in Edison a couple of months ago, we ate there one night last week. At best it is still experiencing opening pains. I also do not see the attraction. The menu sounded great, what was served was average. Portion size was very small on the fries and “large” wedge salad. Neighboring tables were also not very impressed.

I used to live near the Clifton location. Went once. It wasn’t bad, but it wasn’t fantastic, and it was expensive.

@NotJrvedivici What does the Solution and checkbox mean? First time I’ve seen that!

I went once and thought the burger was really good. They also ranked very high on NJ.com’s ratings of the burger chains in NJ, with high marks for the milk shakes. But it’s more of a destination place and not somewhere I would want to drop in for a burger fix.

A Zinburger opened in Edison a couple of months ago

Kind of funny when I did a search for Zinburger my post here came up. I had a business lunch there (Edison Location) yesterday and although I don’t remember actually making this post, as I read it my opinion really hasn’t changed much.

I have NO IDEA how this place is “thriving”. I’ve said a million times I’m not the biggest burger guy, but heck I enjoy a good burger as much as the next guy. Maybe I’m spoiled to live so close to Barnacle Bills / Pour House that I lost appreciation for these “Burger Boutiques” but dam for the prices of their burgers there should be a “wow” factor. I got the; “El Diablo” - Pepper Jack Cheese, Fire-Roasted Jalapeños, Braised Onions, Lettuce & Chipotle Mayo - I’ve used toothpaste with more heat and spice than this burger had. I couldn’t identify anything spicy or even remotely “hot” about the burger. I actually asked the server half way through if this was the correct order, I thought maybe they brought me a wrong burger.

Blech…I’m offering a special to my Ho’ friends. If you have a hankering for a Zinburger pay me the $ 12. I’ll sucker punch you in the gut, then give you back $5. so you can get a decent burger at Mc’ D’s. At least you would have gotten “something” for your money.

I’m surprised when you did your search that the thread about the Zinburger being built in Marlboro (replacing the torn down TGI Friday’s) didn’t come up. It’s in the Home Depot/ShopRite strip, and since I shop often at ShopRite (was there early this a.m.), I’ve watched Zinburger’s progress. The structure was finished a few weeks ago, so they’ve been working on the interior (inside lights are on). I’m guessing it won’t be too long before it opens.

We’ve never been to a Zinburger. I was considering trying the burger, but your experience gives me pause.

We usually don’t eat chain burgers. When we go to Mickey D’s, we always get Chicken McNuggets. Several years ago, a 5 Guys opened five minutes from our house. We tried it once, and that was once too often! Horrible burger and even worse fries. We also tried the White Castle near us years ago. Meh.

We first went to Shake Shack in Madison Square Park right after it opened in 2004. (It’s three avenue blocks from our apartment.) That was long before it became a chain. Love the burger, fries, and soft serve. The flagship is the only SS we go to. Just outdoor seating, so we go once a year during the warm weather months.

It did come up, so did another Zinburger thread. I decided to re-post in this thread since I originally started it and after re-reading it seems my impression hasn’t changed. Thus, I posted in this thread.

a 5 Guys opened five minutes from our house. We tried it once, and that was once too often!

I concur, however I had a theory regarding them. I only had 5 Guys to go/take home. They wrapped their burgers in a foil type wrapping, which didn’t breath or allow the steam to escape as well as I guess paper or cardboard like the big chains use. This meant the burger and it’s condiments continued to steam during the drive home. The wrapping created a steam room environment so the tomato and lettuce were wilted and the bun and cheese all molded together creating a hot steamy mess of a burger.

Perhaps if I had even dined in at a 5 Guys my opinion might be different, but there wasn’t enough there for me to give it another try.

I have never been to a Shake Shack, not sure there are any in Jersey, when I’m in the City there are way too many options I want to have to waste my time on a burger. Or if I do get one it’s going to be at one of my favorite steakhouses like this one: 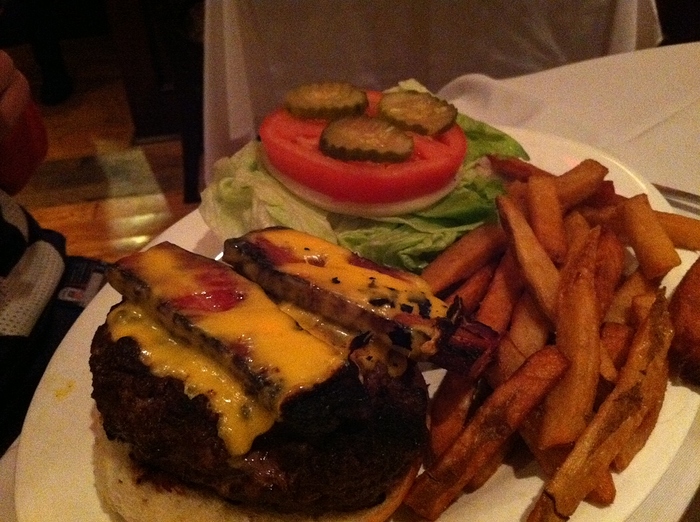 If you have a hankering for a Zinburger pay me the $ 12. I’ll sucker punch you in the gut, then give you back $5.

I’m sending you $12 to buy a burger as a gift for @seal. He gets the $5 back after you sucker punch him.

I like the cut of your jib Mr. BossaNova

You can say…“Thank you sir, may I have another”

Um, we certainly DO have Shake Shack in NJ–and there’s one coming SOON to the GSP Monmouth Travel Plaza (Wall) rest area! Danny Meyer doesn’t mess around, and imo, it’s a damn good burger, whether you have it in Madison Sq Park or not. Also, the fries. Also, THE CUSTARD.

Oh wow my bad! All North though that’s why I was clueless!