You can now ask for your doggy bag in France

Doggy bags have long been frowned upon in France as an affront to gastronomic etiquette, but restaurants are now legally obliged to provide them if requested by diners, in a move to cut food wastage.

The new regulation, which came into force on New Year’s Day, applies to restaurants serving more than 180 meals a day.

It is aimed at encouraging the French to overcome their reluctance to eat their leftover pot au feu or coq au vin at home the next day.

“This is something that won’t catch on in France,” said food writer Franck Pinay-Rabaroust of the gastronomy magazine Atabula. “Taking leftovers home from a restaurant is unusual here and often frowned upon as an American custom. That may change a bit now that better designed bags are being made that look more chic, but there’s a cultural obstacle.”

Xavier Denamur, the owner of four restaurants in the ultra-chic Marais neighbourhood of Paris, said his eateries only give out two or three doggy bags a day, mainly to foreigners.
…

“We don’t serve huge portions they way they do in America and we hardly throw anything away because we cook everything to order so we never have large quantities of pre-cooked food,” he told the Telegraph. 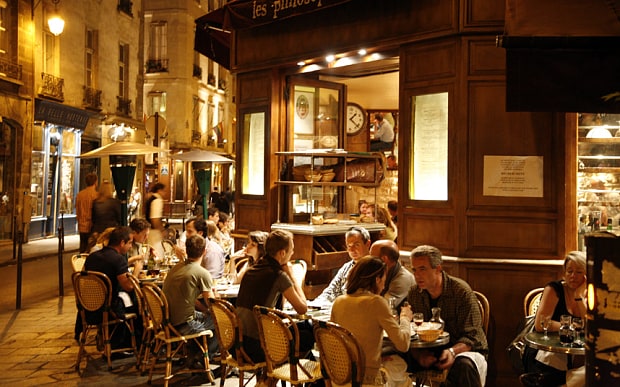 Years ago, I have asked L’Ami Jean to put riz au lait in a doggy bag as we couldn’t finish it, the portion was too generous, and it was too good to leave it. They don’t have problem, and actually they separated the rice pudding from the caramel. Even the next morning it was still very good. It was my only time I asked for a doggy bag in a French restaurant. For Asian restaurant in France, I think when they see some leftover, they even propose to you.

As the food portion is generally just about right in a French restaurant. The demand of doggy bag isn’t high (except if you dine in Chez Denise). The real problem is the unfinished wine which this law didn’t touched. Many people were upset that nothing is proposed, and the restaurant can resell by glass. I hope there will be further debate on this not too ethnic practice. Instead of finishing the wine (in excess) I really would like to ask for a bouchon (but lack the courage).

Just about the only time I’ve seen a doggy bag in the UK is at the local Sichuan restaurants, where the young Chinese (students ?) seem to do it. Doesnt seem to happen with young Chinese at the Cantonese places.

I suppose its because the portions at the Sichuan places are sized more like those I come across in American restaurants from time to time, rather than other places here or in other European countries.

I have a feeling that most Asian places they sell take away already, they don’t mind at all you just take food home. They have all the boxes, bags.

Perhaps at last we can look forward to the “sac au chien” but I hope not. In fact, the French seem to have pre-solved this problem by dint of taking their dog to the restaurant instead!

The reality with the new fancy restaurants, after a 10 plates degustation meal, you left the restaurant still feeling hungry, not to say your poor dog.

In some of them, so hungry I ate the dog.

after a 10 plates degustation meal,

I have to say that, in general, the time has passed when I prefer the degustation to the carte. There always seems to be a couple of courses that I’d have preferred not to eat.

We Americans were at a (now defunct) Harvey Nichols restaurant for dinner late one night in London, and asked for take out boxes for unfinished food. As I passed the kitchen on the way to the bath, I hear the waiter telling kitchen staff, “they want a go box!” The kitchen replied, “you are SH*TTING ME!” i was so shocked that they were so shocked and at the utter rudeness, but they scrambled around and found something. What a waste of food. We were in a suite with a kitchen. My first and last encounter with this imperial attitude.

My first and last encounter with this imperial attitude.

I presume that means you’ve not asked for one since? You’d find staff in most European restaurants would generally have the same surprise at the request - although perhaps in London, which seems to be about the only part of the UK that Americans visit, they’ll have heard your compatriots asking for one.

If there is food waste, there must have been some inflation of portion size, non?

No I haven’t. I go to London regularly for business, and yes would love to see the lake district! Have been to other areas though, when time permits. I have also been to other countries in Europe and learned my lesson there at that restaurant about take aways. As I said it was a tad embarrassing, but for just that moment. Learn as we go, but often wonder why Europeans would rather waste than break with tradition. Once went to dinner with a lady who openly criticized me leaving food on my plate. Said it was “American.” While American restaurants do tend to pile on, I don’t see much difference in quantity in England. I can never eat it all at any restaurant. I wish my profile reflected that.

Taking wine home is way common in Paris. They just put a cork in the bottle and off you go.

Not sure when it was that Paris restaurants consistently freaked out when people wanted to take home what was left on their plate. It’s far from a strange concept.