I really enjoy all different kinds of dumplings and since I’ve moved to Middletown I’ve been struggling to find good Wontons and good Wonton Eggdrop soup at a takeout place. We usually order from Eastern Empire 3 in Lincroft and their wontons and eggdrop soup is wildly inconsistent. Some nights excellent and others bland and flavorless. Just wondering if anyone has any recommendations for the Middletown area, but would be interested in any place you think is excellent regardless of where.

I haven’t been in a long time, but the house of Chong used to put out decent Americanized Chinese food.

Some people on here little little szechuan in little silver. I’ve been there a few dozen times and it’s ok, but not great in my eyes.

Oriental empire in red bank isn’t bad. Again, it’s all Americanized stuff but it is decent. I haven’t had a single bad dish but nothing will wow you.

The real deal is Sichuan cottage in marlboro! That place is serious.

How about matatta? I went once many years ago and thought it was decent…not good enough to get back though.

Thanks for the recommendations. I tried little Szechuan when we lived in LS about 8 years ago. Don’t remember loving it. I think the key word in your post is Americanized and that is what I’m looking for. Love going to West Lake in Aberdeen for authentic Dim Sum on the weekend and love Shanghai Bun any time for all the amazing food, but sometimes I just want that Americanized taste i grew up with. Thanks again.

I’m on the other side of the country, and I love the New Jersey threads.

I have never even heard of wonton egg drop soup. It sounds terrific.

I have never even heard of wonton egg drop soup. It sounds terrific.

Never heard of this soup too. I tried to look it up: 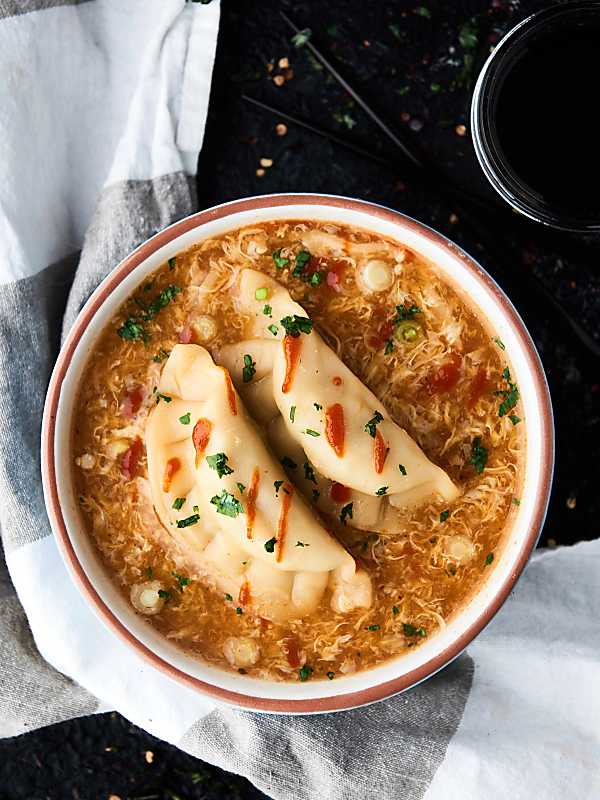 Based on that, I would try house of chong. It’s been in business for probably 20 years in a strip mall that literally no one can thrive in. They appear to be doing something right.

I haven’t been in years, but I always had decent food there. Let us know.

If you’re ever in the western part of the county the wonton egg drop soup is terrific at King’s on Rt9 North in Freehold. All of the soups are great including the hard to find tomato egg drop. The rest of the food is also good if you’re looking for classic American Chinese food. It’s a real sit down restaurant like the kind I grew up with, ie. one from column A, one from column B kind of place.

Same here, never seen wonton + egg drop combo, but why not? But the things in the link you found aren’t even wontons!

@hcentro - Shanghai bun has a few different types of wonton soup, have you tried them? I like their shanghai style on a cold winter day. I bet you can ask them to drop an egg in it.

I’ll see your Wonton Eggdrop soup, and raise you one.

I love Hong Kong wonton with the fresh skin and snappy shrimp. But sometimes, just gotta scratch that itch for good old-fashion Chinese American. I think Yee Foo may only be a West Coast thing, as my friends outside SF Chinatown have never heard of it, let alone tried it.

This wonton variant has a bit more chew, and a bit of a smoky flavor. If you like dipping a fresh crispy youtiau in hot congee, you may be a candidate for this. 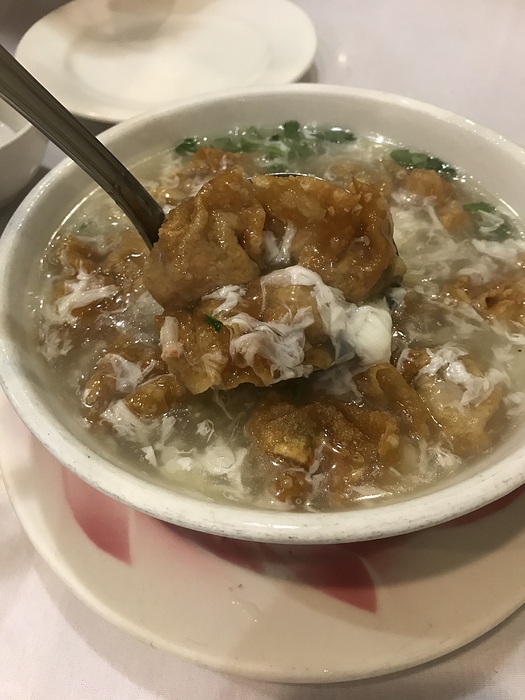 Wontons are not cooked in the soup they are served with. They are boiled and then left to cool. When ordered, they can be tossed in any broth type you want.

This is what I love about the HOs…

And fwiw, Wonton/Eggdrop soup is something I learned about late in life (after eating a LOT of Chinese food)…I thought it was just a combo of wonton and eggdrop soups, though!

That looks awesome! Where is that from?

I haven’t been in a long time, but the house of Chong used to put out decent Americanized Chinese food.

I like House of Chong for certain things (basic Americanized Chinese food) but I find their wontons to be extra doughy. If you like a thicker noodle and not a lot of meat, this is the place. I’m not saying that in a bad way, btw. The broth is tasty as are the wontons. I find the wontons at Crown Palace to be less doughy.

At Chong the Hot and Sour soup is unfortunately inconsistent, some nights it’s the best ever and some nights if it were a beer we’d call it a drain pour.

Where is that from?

From the Golden Horse on Hyde St in San Francisco. A neighborhood restaurant on Russian Hill.

Not fancy at all. Simple good cooking at a palatable price. We also had Kung Pao Chicken, nothing to write home about, but we knew that going in. 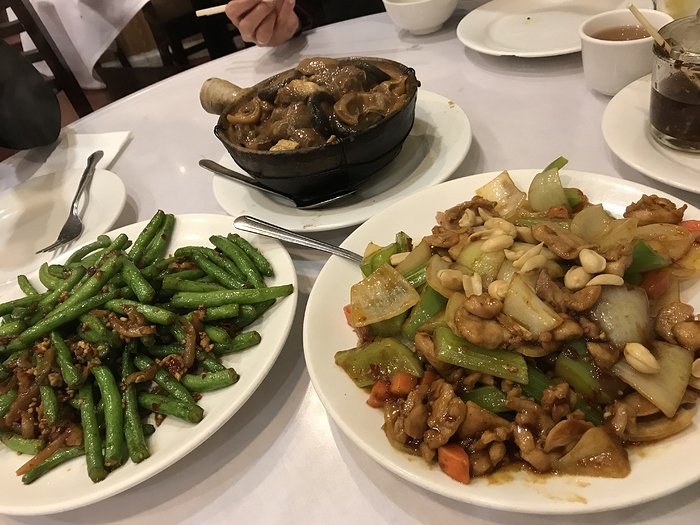 My favorite was the goat clay pot. Pieces of goat meat/rib/skin in a jus with fu jook (bean curd sticks), silky smooth shiitake. The iceberg lettuce lining the bottom was so good from soaking in the juices. 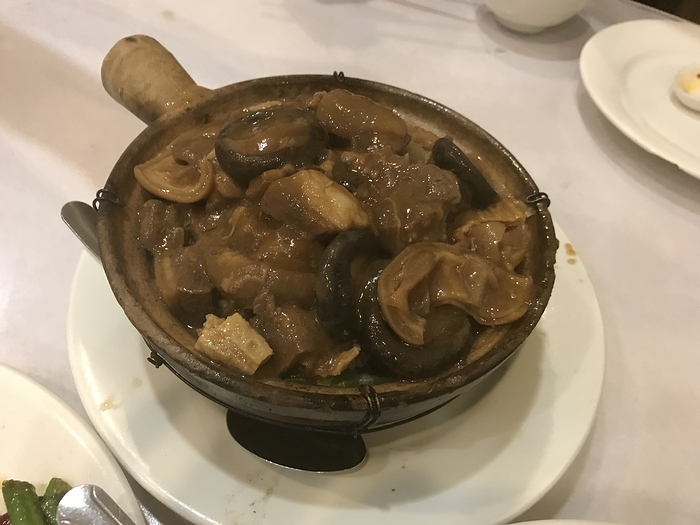 I’m in Albany these days, though many years ago I got married in Goshen, not far from Middletown.

I’d noticed the soups at my favorite takeout place were very inconsistent too- though usually quite good, the flavor profile varied wildly. I finally figured out that they were reheating the broth in one of the woks, so the soup was taking on the flavor of the last dish cooked there. Don’t know if that might be happening at your favorite place too but I figured it was worth mentioning.
Ii think they may be doing the eggdrop thing on the spot there using one of their woks.

When I bring home soup and find it a bit bland, I hit it with just a drop of toasted sesame oil and that ups the flavor quotient considerably.

The best wonton soup I think I ever had was in Montreal, at a little place that sounded like it should be Korean, but served Chinese-American. They infused the broth with ginger and used a little pepper and sesame oil in the wonton filling. Every time you bit into one it was a little taste explosion. I still remember it twenty years later.

I am not a fan of wonton soup at most Chinese-American restaurants. The wonton wrappers they use are too thick. I prefer the thin Hong Kong style of skins that I can get at AFM or other supermarkets. I actually like wrapping the wontons by hand from the pork/shrimp/scallion/mushroom mixture that I got from a recipe. I cheat a bit by using Cento chicken broth and adding some greens like yu choy. Good family activity.

I usually only order wonton soup, not the combo. But my friend gets it at Little Szechuan. I thought their wontons were great. On the chewy side, but in a good way. However, I still maintain that West Lake in Matawan has the best actual wontons. They were paper-thin and incredibly light. I wasn’t a fan of much else in that place, actually.

Yes! I hate when I get the stupid thick ass wonton wrappers. Luckily I’ve found a few places close to me that does the thin skinned ones, and they even do a decent job with the shrimp wontons.

@tomt I find hot and sour to be inconsistent at almost all takeout places. I guess tossing together single serving soup ingredients in the blink of an eye is pretty tough to get consistent.