Reminder: please include [City, Neighborhood] in your post title above.

It’s in former location of Lucky River and shortly Ming Garden. Yelper’s report that R&G’s owner’s are involved, but that’s not reflected in the named parties of their respective liquor licenses. 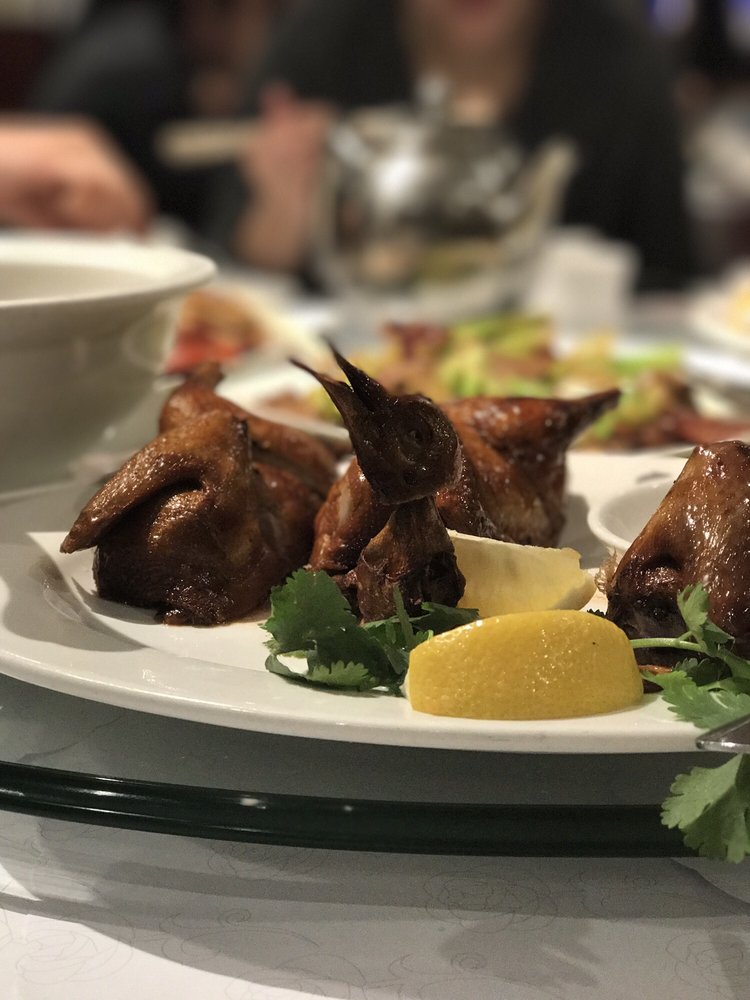 Do they still serve the pork chops from the Lucky River days?

Someone also indicated that the head chef Ah Wah was the head chef at R&G… I don’t know who the R&G chefs are/ were. Possibility for a Yum’s Bistro type find in Sunnyside? 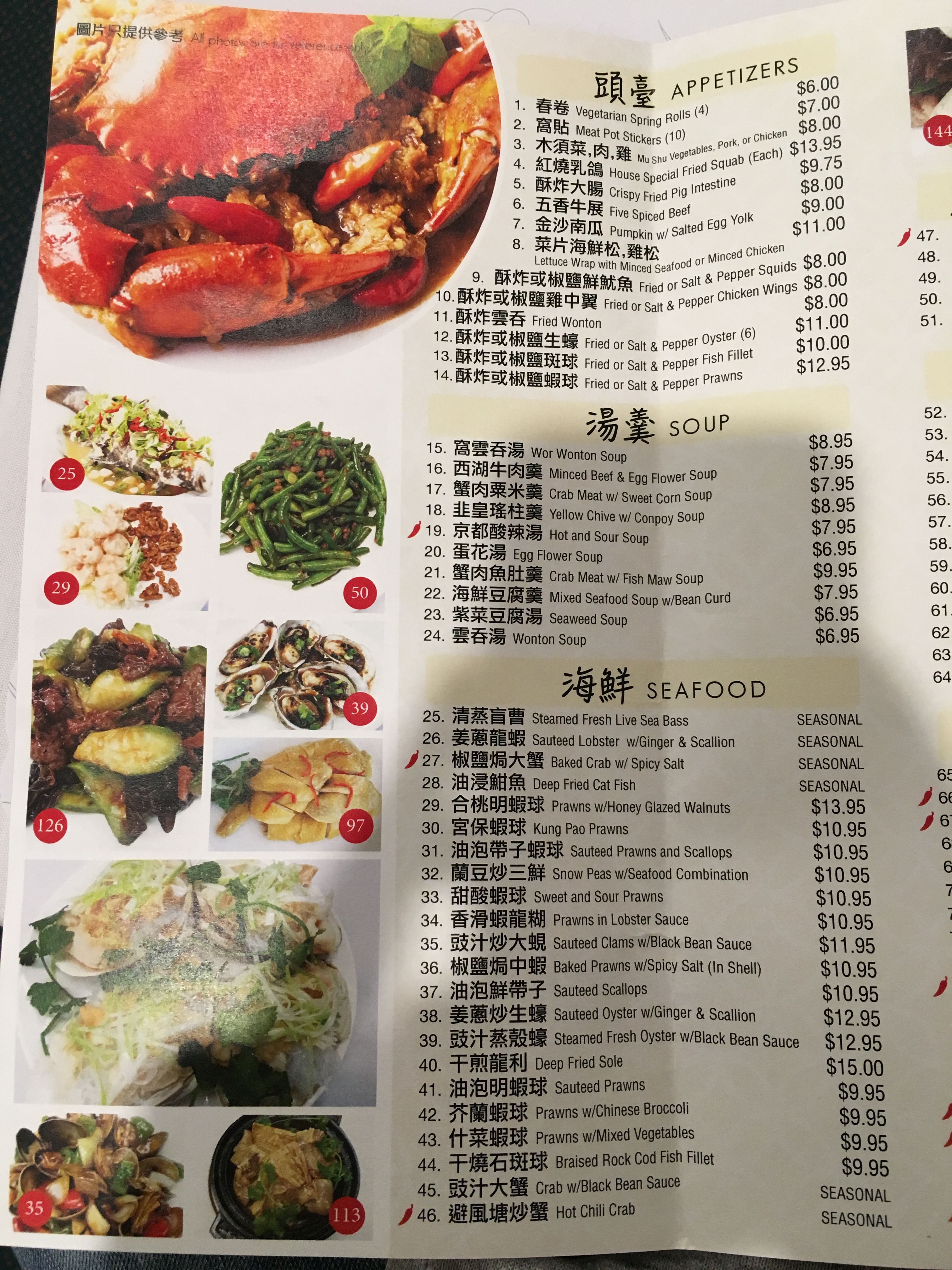 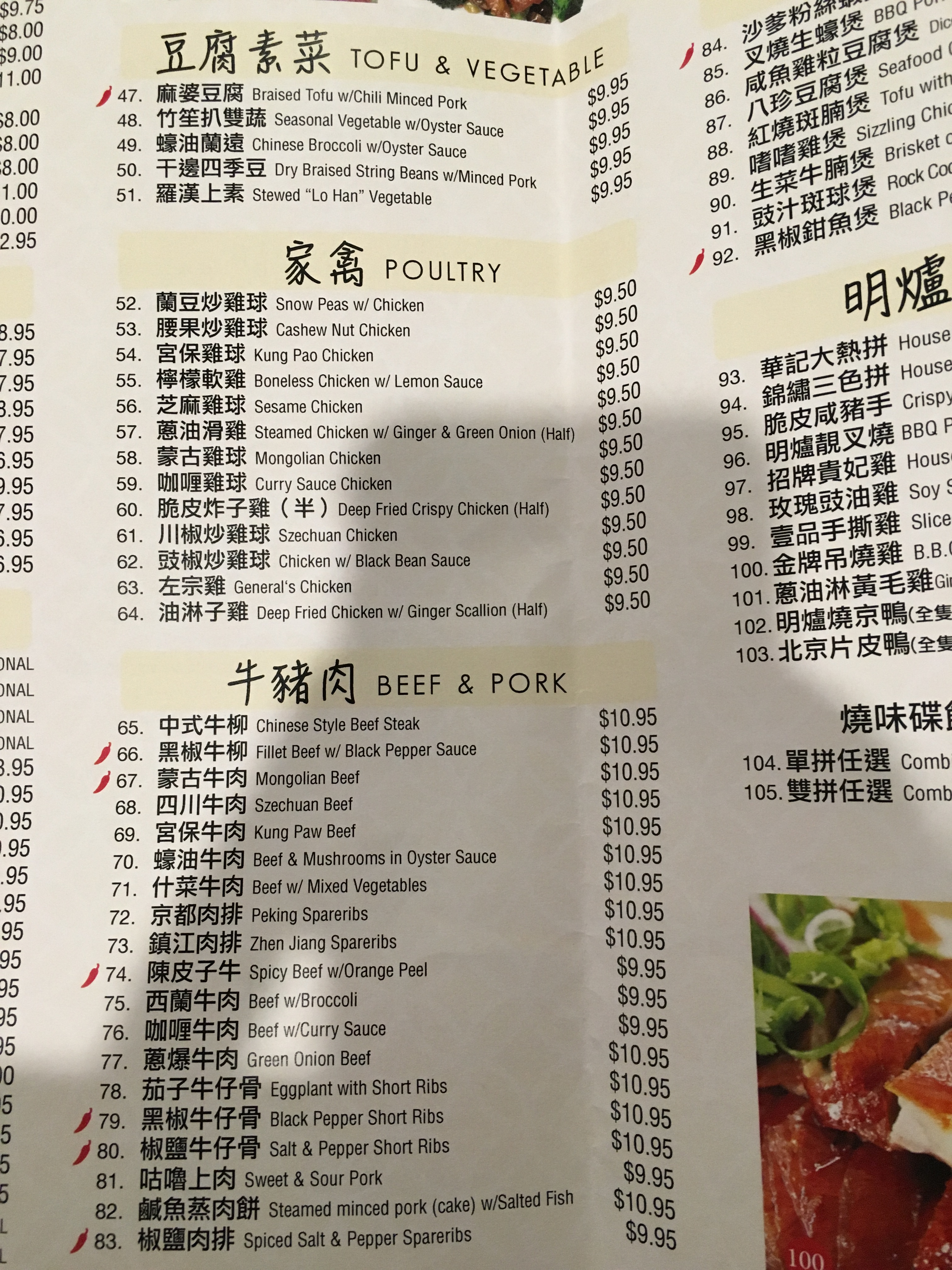 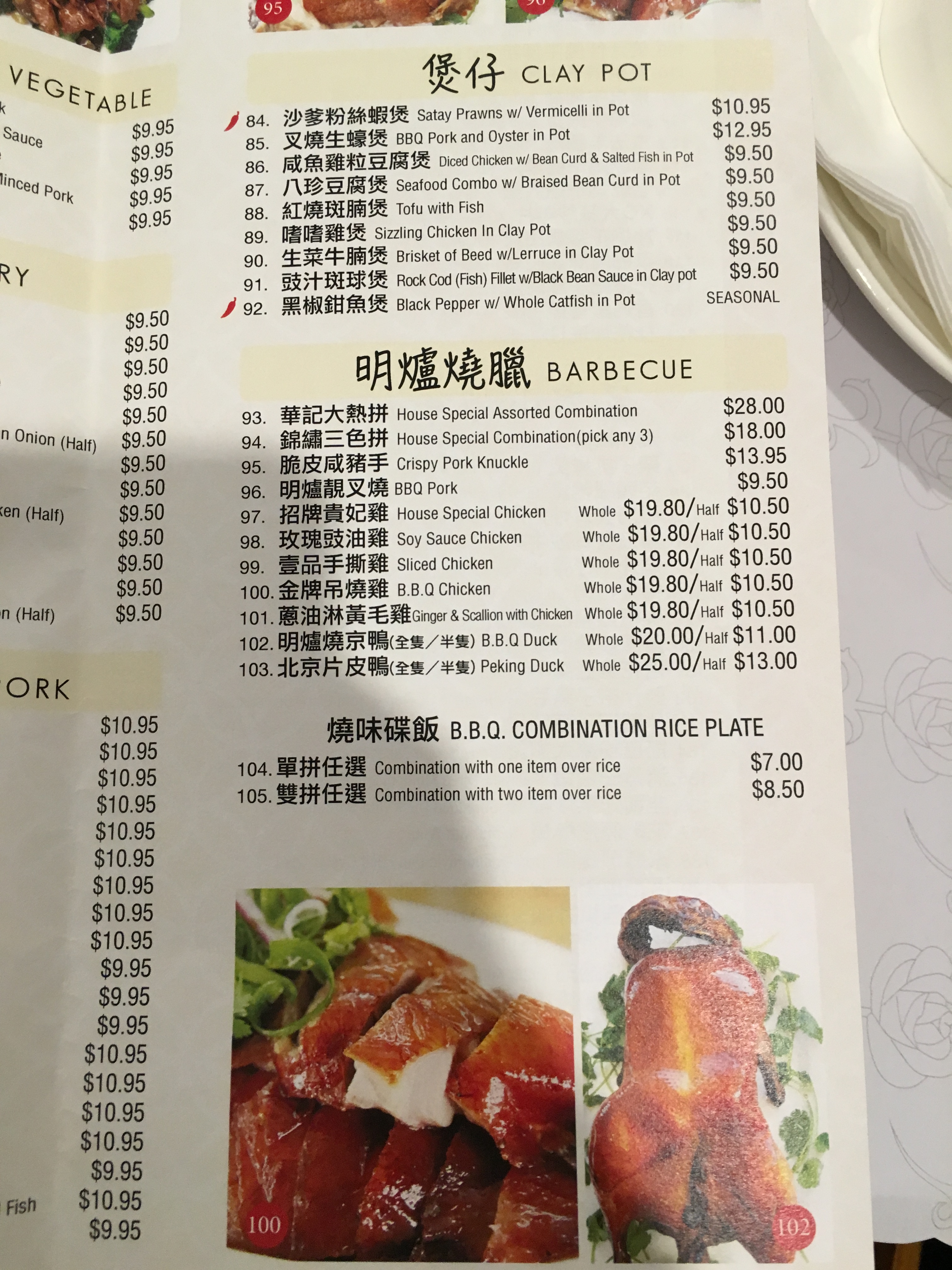 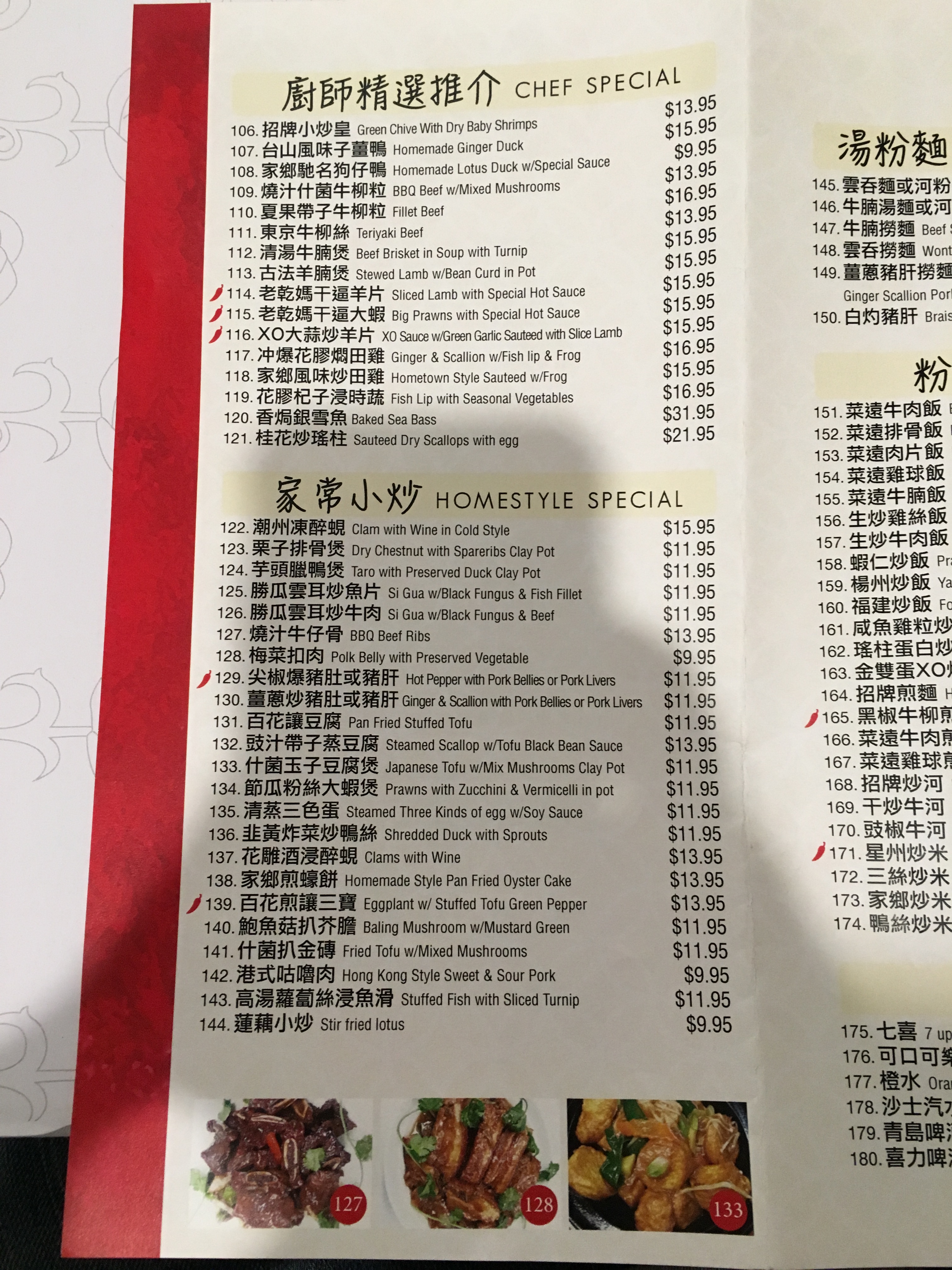 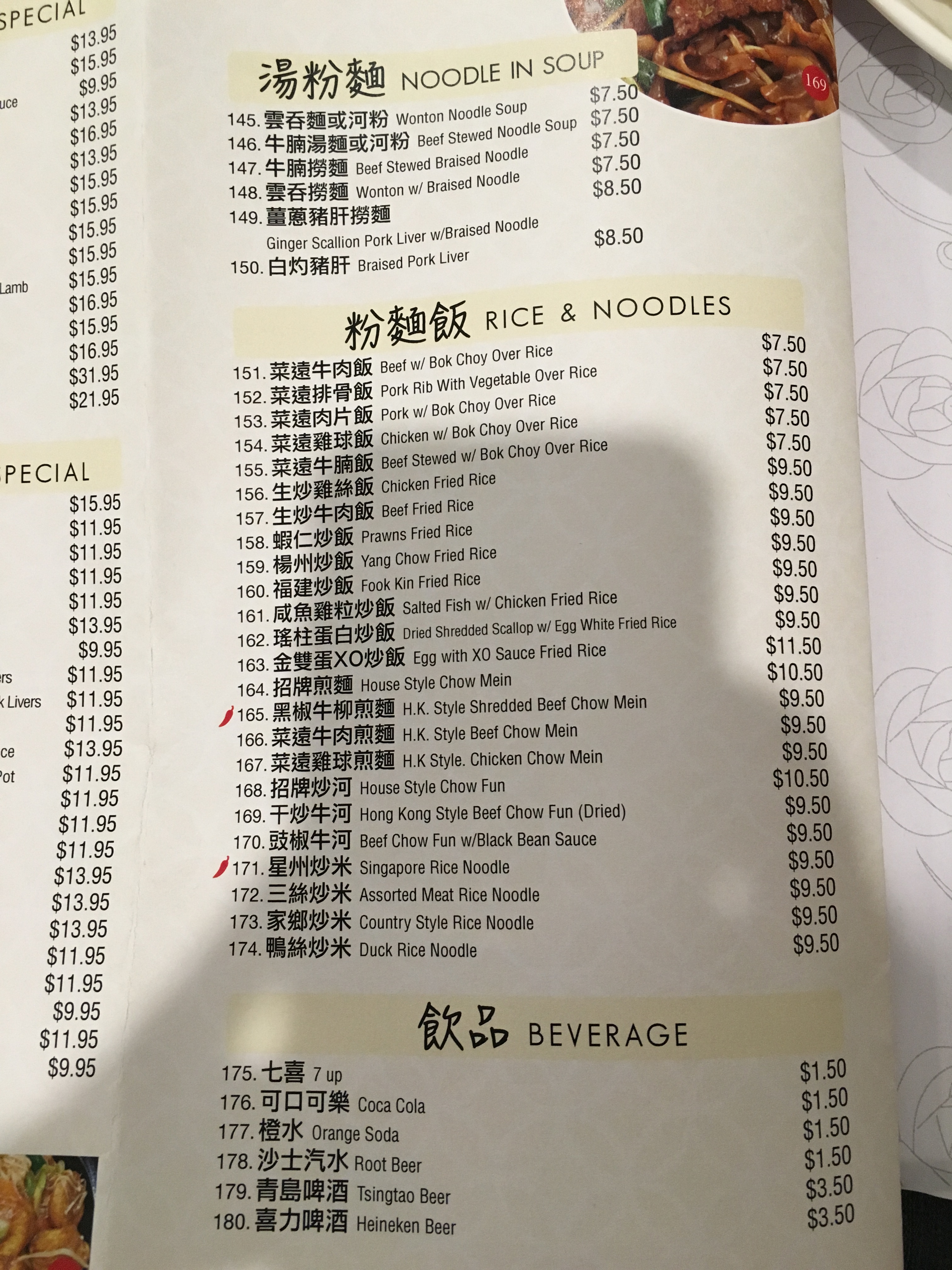 First things first, they still have Zhenjiang spare ribs (#73), which were a specialty of a former restaurant in this location, Lucky River http://www.chowhound.com/post/zhenjiang-pork-chops-lucky-river-san-francisco-864449 . The server said that the chef and owners are from Chinatown’s R&G Lounge, and that the dish might taste different.

The atmosphere, menu, and prices are more casual than R&G, so the connection isn’t obvious. Just about everyone had BBQ meats or seafood on their tables.

Seafood specials are written in Chinese on a white board, but you can see tanks with live shrimp, lobster, Dungeness crab near the 2nd floor exit. The staff speak English well, and should be able to translate anything. Ask about the seasonal vegetables too—not much is listed on the menu. 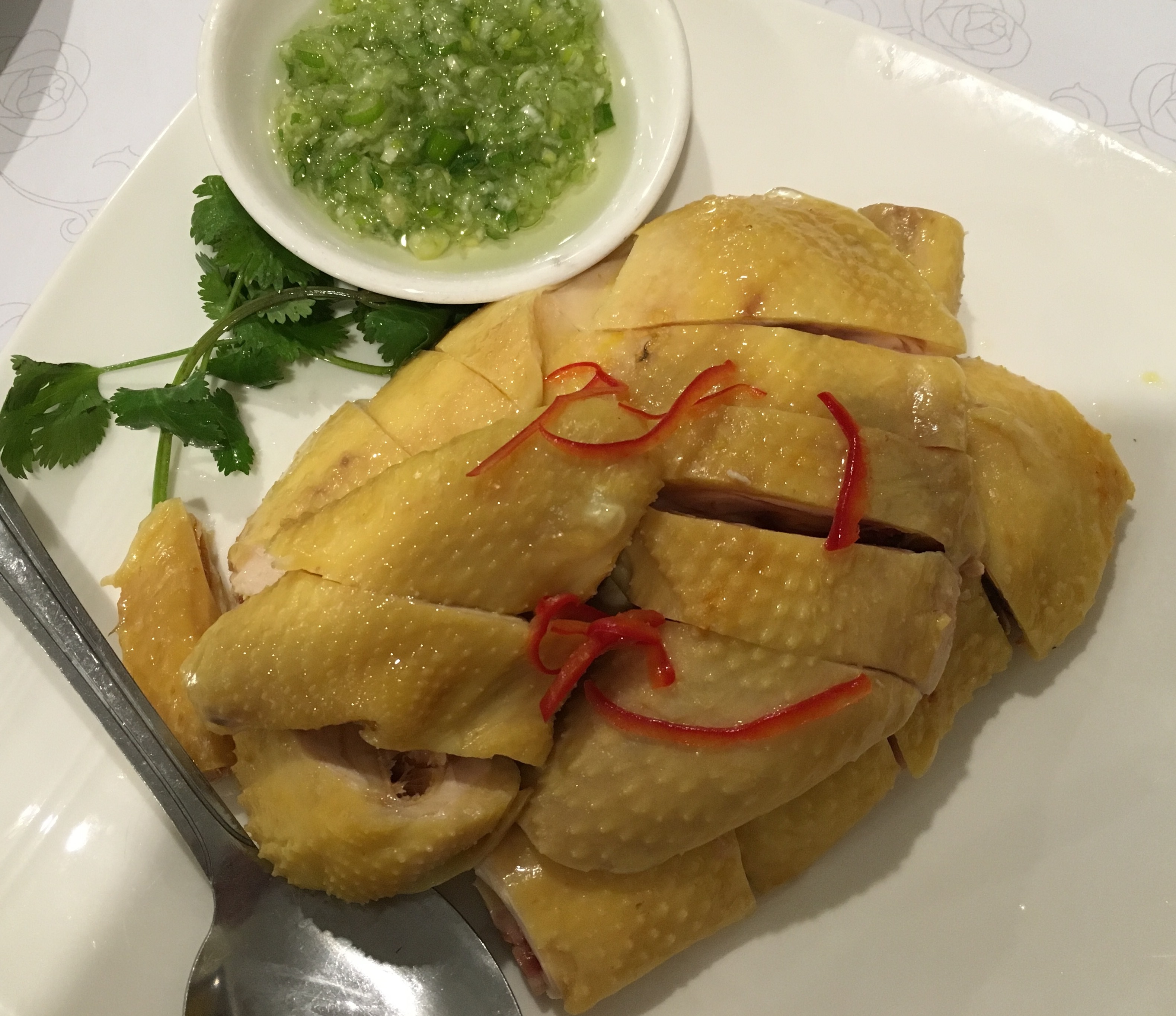 The #97 house special chicken (aka empress chicken), poached ‘yellow feather chicken,’ was a light dish to start the meal, and the salty green onion slurry helped whet my appetite for the others dishes. 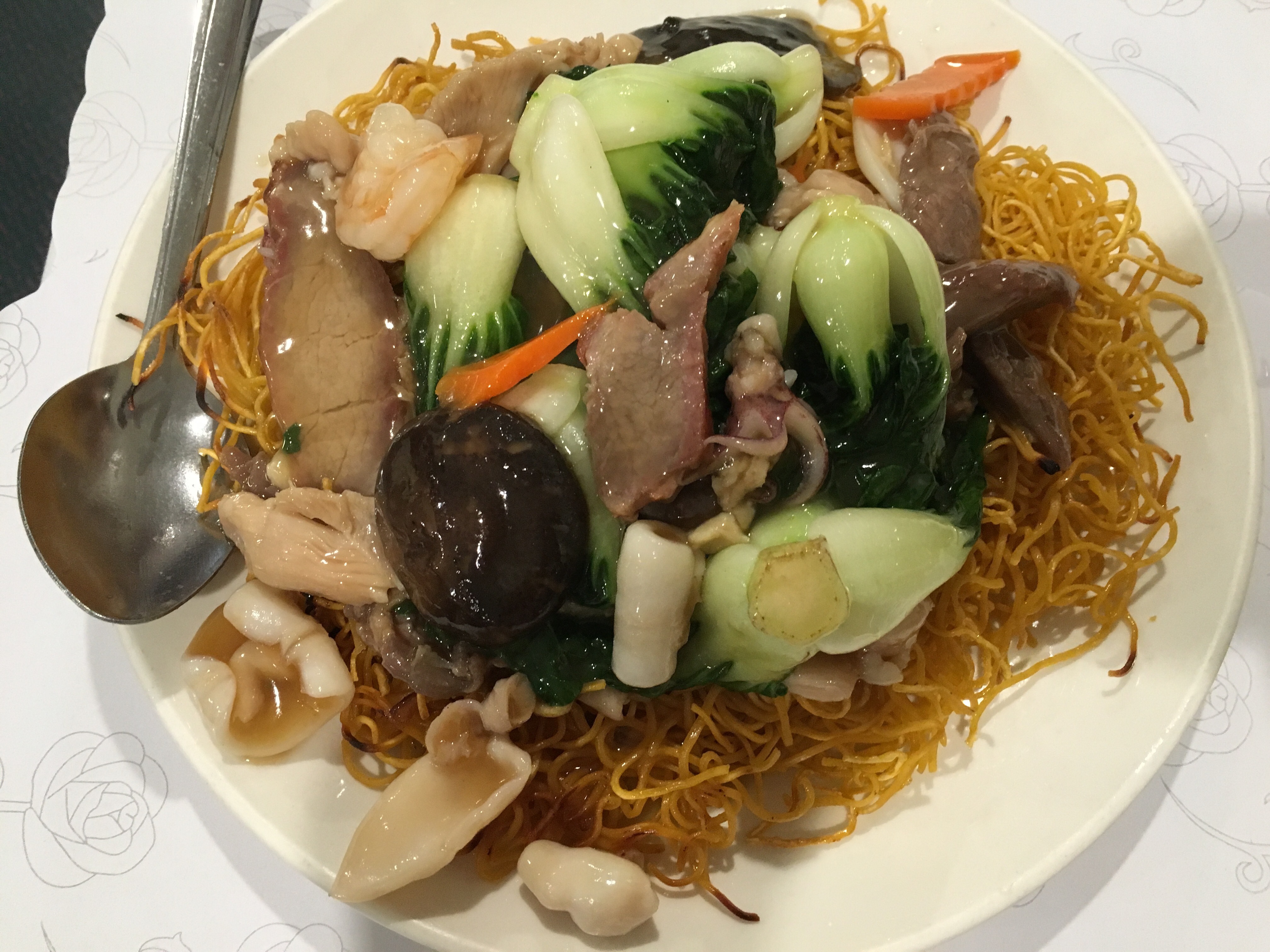 The (pan fried crispy) house style chow mein was a good rendition without any filler. It included BBQ pork, squid body and tentacle, shrimp, beef, chicken, baby bok choy, and shiitake mushrooms. The noodles were easily disentangled, and allowed for a combination of crisp and sauce saturated noodles in each bite. Meats varied in quality. 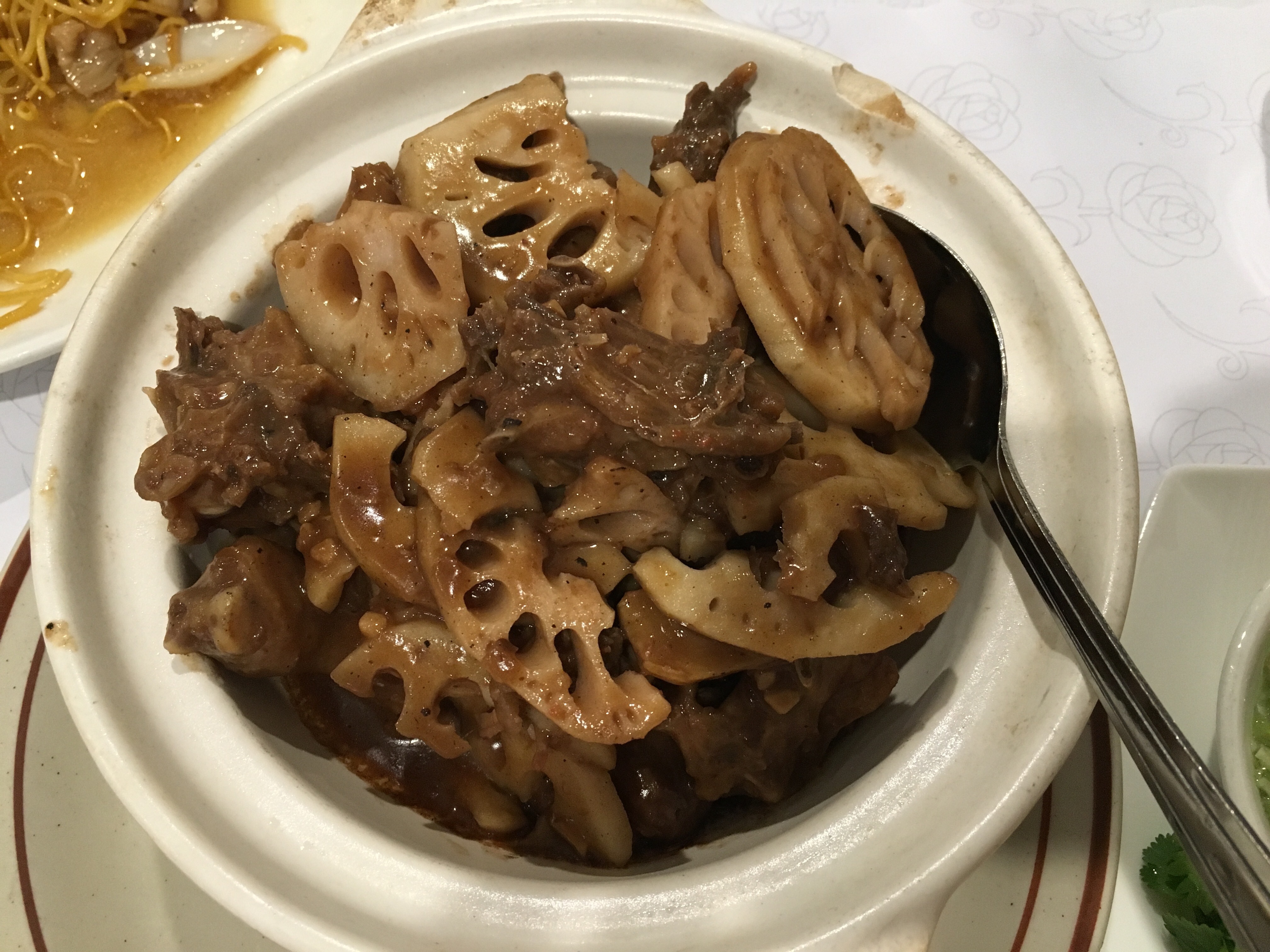 The #108, homemade lotus duck w/ special sauce was great. The duck pieces aren’t fleshy, but each hunk has delicious meat trapped in its crevices. The gravy was savory and didn’t distract from the flavor of the duck.

Thanks. Was the lotus root in 108 soft or crispy? Were there live fishes in the tanks??

Based on your very limited sample, how would you compare the cooking ability to R&G?

Yup, live fish in the tanks and soft/crispy lotus.

Tough call since there’s no overlap in the dishes I’ve eaten at both places, and because the toppings in “house special” chow mein never get cooked with as much care as a straight up beef or whatever chow mein (better here than at Yuet Lee though).

I’ll focus on seafood next time I go!

Oh I wasn’t suggesting that they are good at seafood. Just reading the menu, and set aside for a second your observations of bbq meat and seafood on other patrons’ table, its pretty hard to figure out what they specialize at- they cover many areas that a typical Cantonese banquet restaurant covers. I wonder what the chef cooked at R&G.

I didn’t want to interrupt the very lively staff meal, which was close to both the fish tank and the whiteboard, so I didn’t get a good look. @NancyB , please take a picture of the whiteboard if you go in!

I found a whiteboard pic: 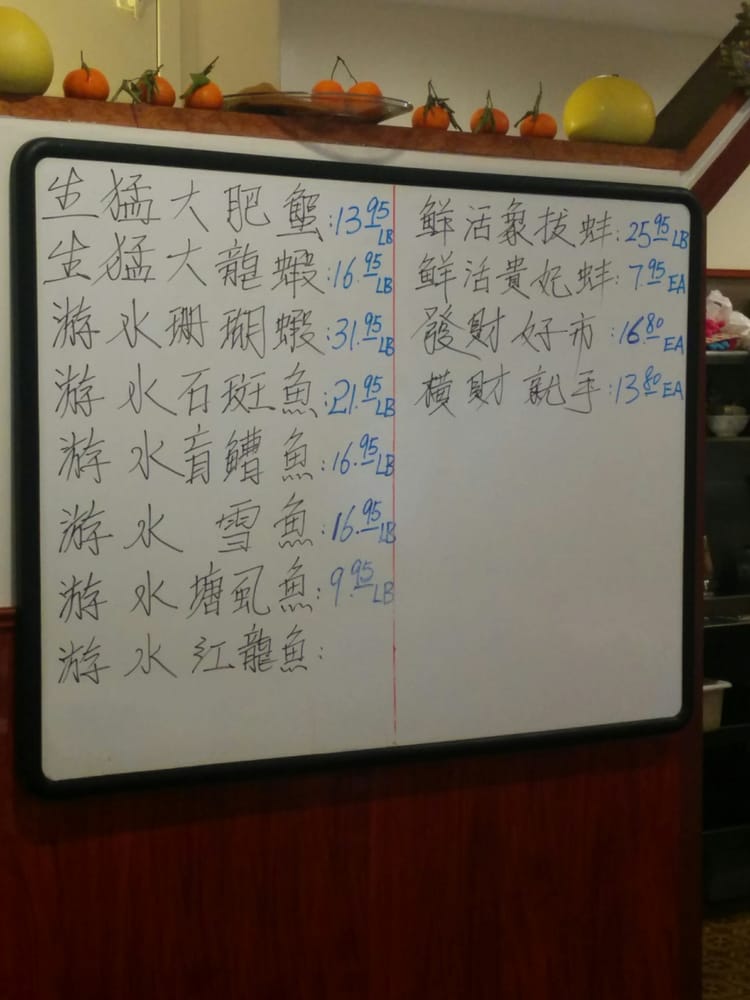 They got the standard entry-level live seafood: crab, lobster, spotted prawn, rock cod, (forgot the english name of 盲鰽), cod, catfish, not sure what 江龍魚 is, geoduck, empress clam and a couple of new year dishes

Apparently the place has been on some news and very crowded with people- not sure if its because of it being new, or because of Chinese New Year, or both…

Any connection to venerable King Dong in Berkeley? (Sorry, had to lower the level of discourse.) 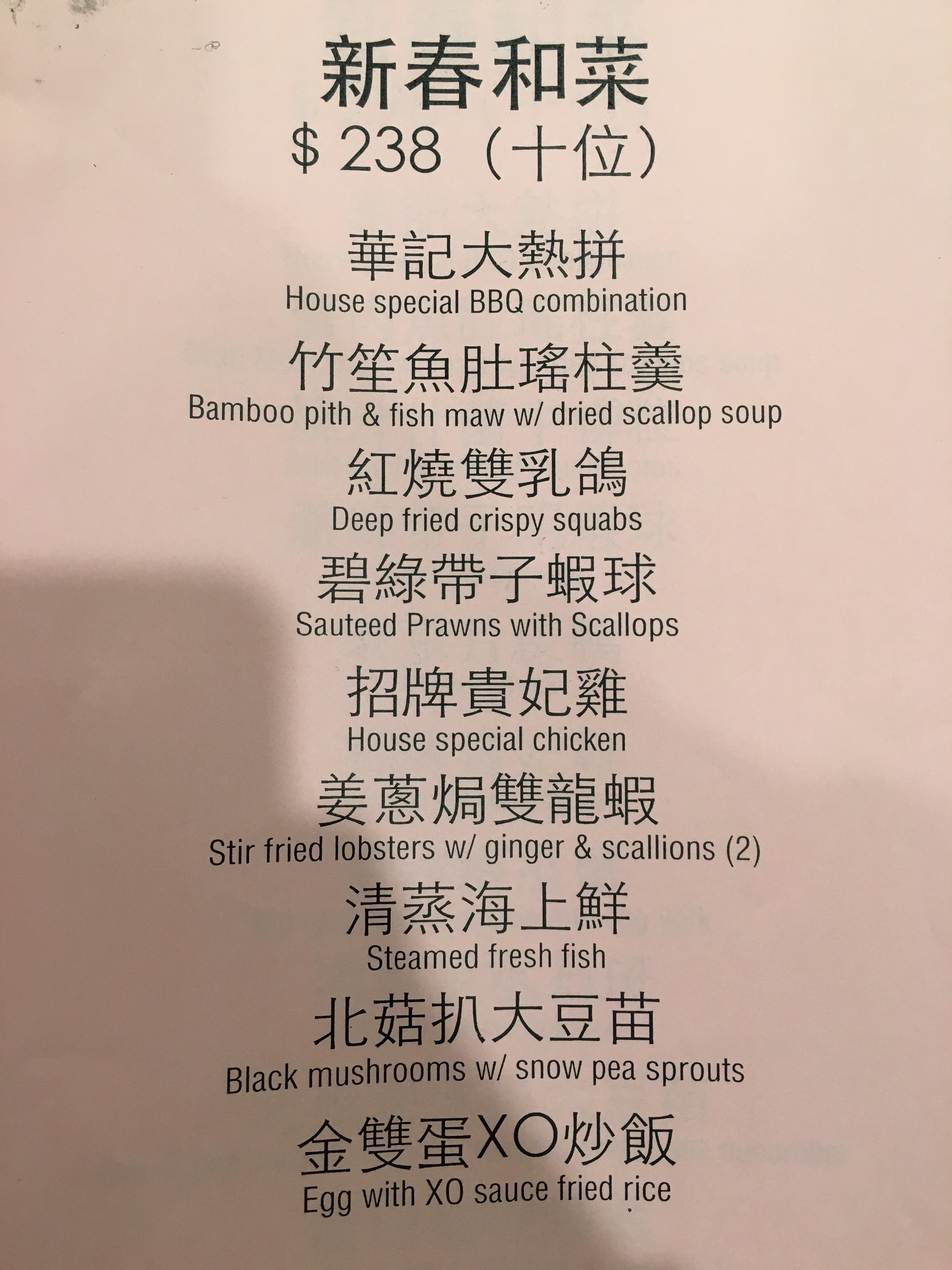 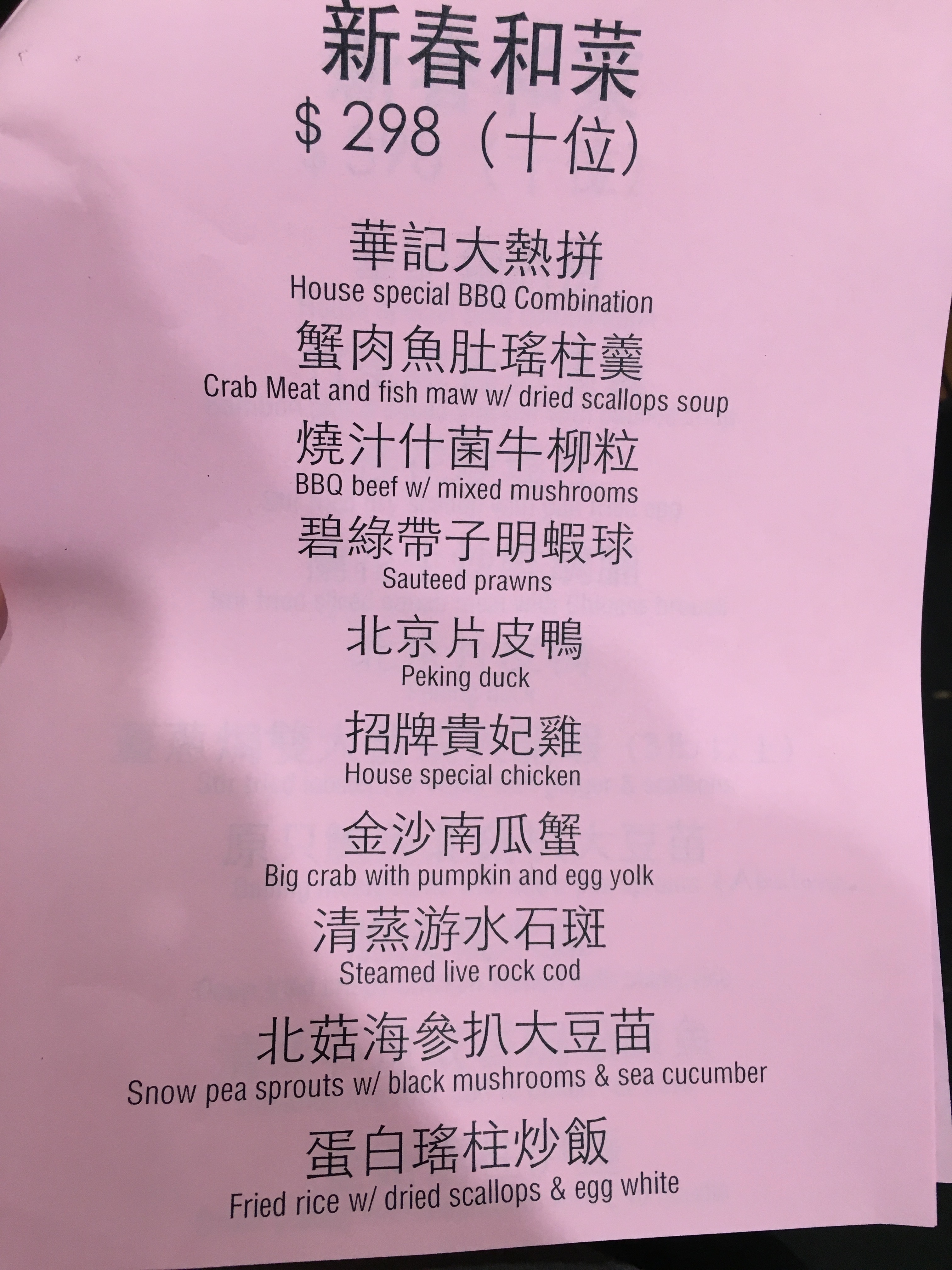 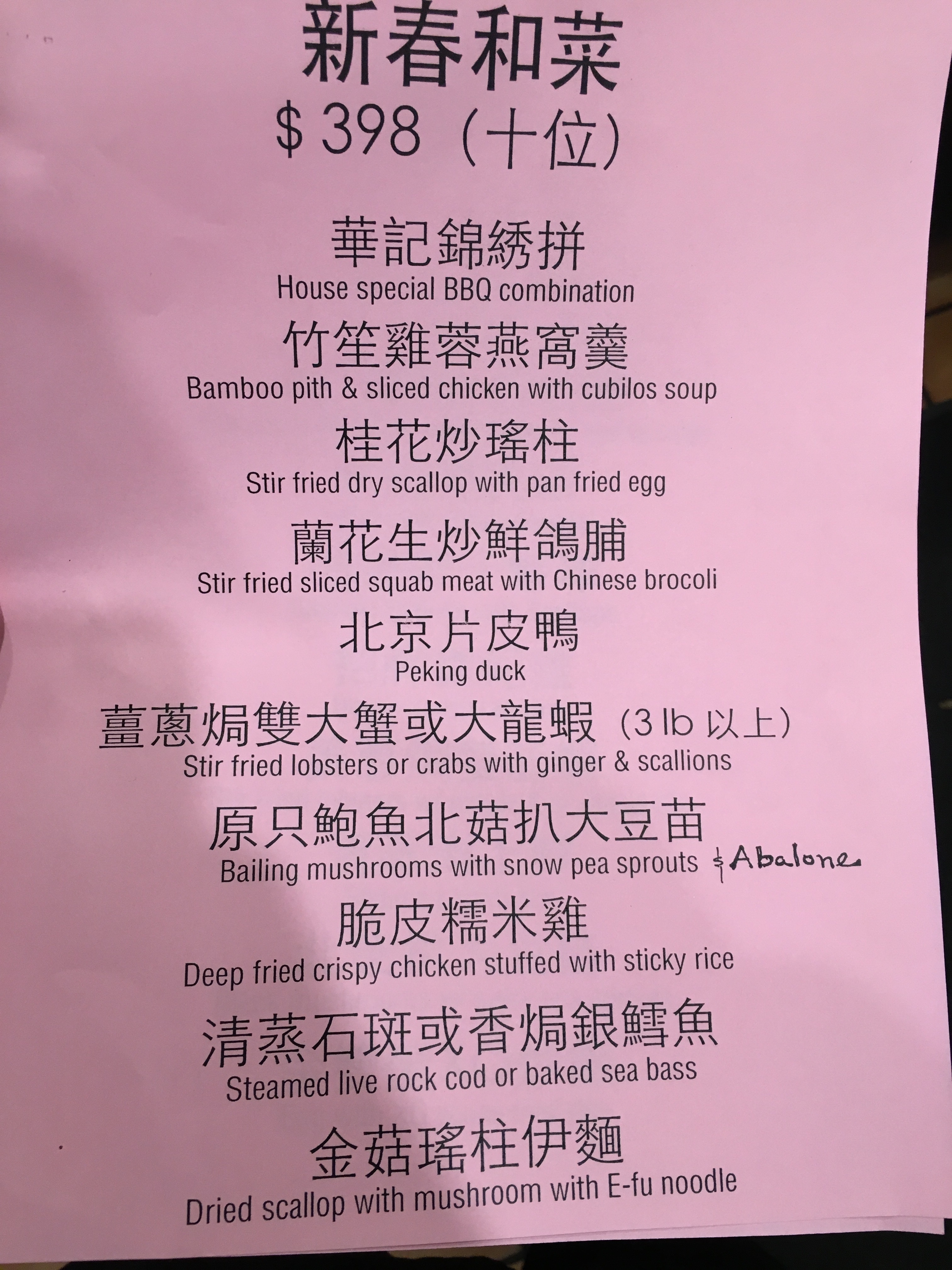 The $238 menu, while not fancy, looks a pretty good value.

Anyway, is there any indication of whether this is related to the Won Kok restaurant in L.A. Chinatown? Used to eat there in 1989-1990 when I worked nearby.

I was trying to evoke imagery of Aztec temples with my iPhone, but will consider silhouettes of an ‘HO’ cutout in the future