Where to eat in Sicily?

I’m considering a trip to Sicily in September and wonder which cities are the best to get regional seafood and anything else that is specifically great to eat for the area. advice about regional specialties is also welcome. It seems like spleen is a thing there, what else? Thanks!

I would say there is great regional seafood all along the coast - I have primarily travelled in western and central Sicily (not as far East as Siracusa or Catania) and we enjoyed fine seafood wherever we went (although inland there will be more emphasis on land than sea except in the more expensive restaurants). Where do you intend to travel and what is the focus of your trip? Sicily is spectacular!

Four years ago, we spent only 3 weeks touring thru a reasonably large portion of Sicily, so please take my comments as more impressionistic than authoritative. Firstly, yes, there is a “spleen thing”, mostly in Palermo. In Brooklyn, where I’ve lived most of my life, there is a very large Sicilian (by history) population & the spleen sandwiches have always been listed as “vastedda”. When I tried to show off my knowledge and order a spleen sandwich from a street vendor in one of the great Palermo open air markets, I was corrected & it was explained that vastedda is the traditional bread used to prepare the “Pani câ meusa” and not the name of the sandwich. Oh well. The sandwiches were very nice, even though it seemed that I was the only tourist eating them. Other traditional dishes that I recognized were pasta con Norma (pieces of eggplant, red sauce), rice balls & pasta con sarde (sardines, raisins and pine nuts). All good.
We spent 5 nights in Catania, a city that most tourists get out of as quickly as possible, as its gritty and not half as scenic as the rest of the island. However, its a great base to use to get to Mt Etna and Taormina to the north and Siracusa to the south. And it had a great (smelly) fish market that turns into a restaurant row at night, serving great fish/seafood dishes straight from the market. We had dinners at Osteria Antica Marina and Trat. Mm!! in the market and really liked both. Lunches in both Siracusa and Taormina were similarly seafood based and the settings were way more scenic. On our way to Palermo from Catania, we spent several nights in Cefalu, a north coast seaside beach town with a ton of open air fish restaurants. More touristy (not that the other places weren’t - its just that this is a resort area, meant to serve non-locals) and more expensive, but very good. I cant remember names of any of the places we ate - sorry.
Although we loved the agritourismo we stayed at outside of Agrigento & the tours we took of surrounding villages, I cant say that I remember anything about the food other than it was all fresh, tasty and incredibly worth eating. I don’t think it was fish/seafood based. Similarly, our stay in Mazara del Vallo was excellent, food wise, but not particularly seafood based (even though its a coastal town). However, this place was high on my favorites list, as it seemed to blend many cultures in a very small area & had a thriving artist scene going as well.
In fact, if I had to mention one major reason to go to Sicily, it would be the mix of cultures, both historic and current… and that includes the food. So many “others” from so many areas have invaded, passed thru or otherwise settled in Sicily, that it is a fascinating place to tour. One house of worship, standing for hundreds of years, showed at least 4 different religions had utilized it & that, instead of destroying what they had replaced, they built upon it and integrated it into their own use. Another long standing mosque in Mazara del Vallo had given their property to the Jewish community to rebuild a temple. Or, maybe it was vice versa. Even the street names in the area were written in English, Sicilian dialect, Hebrew and Arabic.
I think I’ve gone on more than long enough. Keep considering that trip. In fact, go!

Trapani has some excellent spots. Also consider a visit to the pre-medieval city of Erice, on a bluff overlooking the coast. Since it’s not right on the coast, the seafood is trucked up from Trapani, but there are some excellent small restaurants. Look for the “Couscous Oggi” signs that many places hang once a week. IIR different restaurants do different days. It’s been years but the chef at the restaurant at Hotel Elimo was particularly adept with seafood.

The ruins at Selenunte and Agrigento are worth a visit. Amazing to find Roman, Greek, and Etruscan ruins scattered about Sicily.

Thanks, Jen. I have not firmed up my plans yet but one of the main focuses of the trip would be food.

Thanks, Steve. You say ‘only 3 weeks’ but that sounds like a great trip to me!

I’m going to piggyback on this thread. I’m finally (fingers crossed) booked again for Sicily. I’ll have 5 nights in Siracusa (Ortigia), 3 in Taormina, and 1 in Catania. I want cozy, delicious dinners, not fancy, starred type places. I don’t eat pork and love seafood. Would love to hear any recommendations on where to eat, and if you have other tips for visiting Sicily, bring ‘em on! I’ve gotten some info from the always helpful @SteveR but so much was lost when Chowhound disappeared.

I’ll also need one dinner in Rome if anyone has suggestions near Largo Argentina. Thanks!

The posts are 5 years old, but reading this https://eatingwithziggy.com/category/italy/sicily/ might be helpful. “Ziggy” is a friend who does food tours here in NY & wrote up his time in Sicily after going in 2016. The rest of his blog is similarly well written.

Rome if anyone has suggestions near Largo Argentina.

To see this route visit https://maps.app.goo.gl/7zxM4hxEZNifK68f6

Thanks for the feedback. I’ve decided to not go to Sicily this year and will instead be heading to Seoul in October. Thanks again!

Thanks for the reminder Steve. I’ve been thoroughly enjoying his Iceland posts on Instagram.

I remember you avoid pork, so 3 of the regional Roman pastas you’ll see offered wouldn’t be of interest, but, luckily cacio e pepe is guanciale-free!

This isn’t about Bologna despite the title. 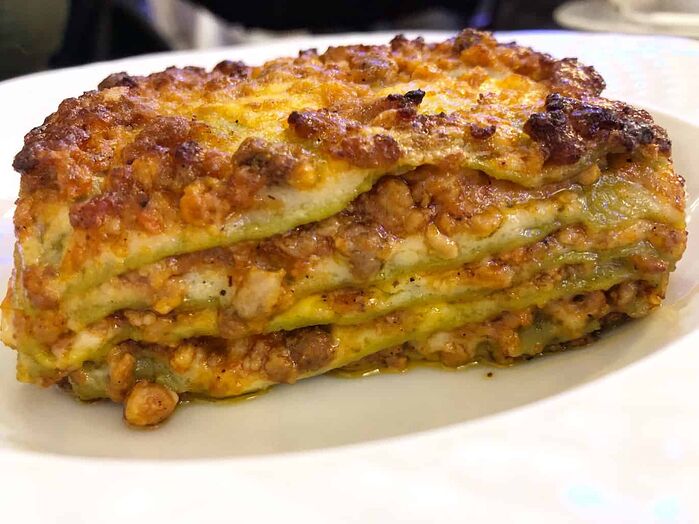 My guide to eating, drinking, and shopping in Bolgona

Food journalist and author Katie Parla shares the best restaurants in Sicily and more in her dining guide with personal recommendations.