Where can I get creamed, chipped beef on toast (aka sh*t on a shingle) in Central NJ?

Having never been in the service, I’ve yet to try this but I know that many veterans make it for breakfast periodically. Any diners serving this up?

A quick google search turns up:

Not exactly central Jersey but they have a great version on the menu at the James Beard award winning Mustache Bill’s Diner in Barnegat Light. I usually skip the toast and have it with two over easy eggs on top or replace the toast with grits on the bottom and the eggs on top.

I checked out in person a number of restaurants in the Jamesburg, Cranbury area in a 20 miles radius and Nada! There is a diner called the Dallas Diner on route 13 south in Levittown Pa that has it. However, just found out that I can buy a frozen entree of it made by Stouffers in Stop & Shop which is not bad at all really.

It’s not exactly central Jersey but they make a great version at Mustache Bills Diner in Barnegat Light on the north end of LBI. They are also currently closed for the winter. It’s a great all around diner and winner oif a James Beard award.

One I do not recommend is at the River Star Diner in Hackettstown.
I make do with the Stouffers. While it is boiling I spread butter on a Calandra’s sub roll. Cut into pieces and hit it with garlic powder and cracked pepper. Toast these well done so it holds up to the sauce. Quick, cheap, and tasty.

The Flemington Coffee Shop has it. I have never ordered it, but the owner is retired military so probably knows this dish well.

Yikes, I forgot the link: https://www.flemingtoncoffeeshop.com/
The SOS is under “Flemington Favorites” on their menu.

I used to go to the outlets in Flemington once in a blue moon, but decided the drive wasn’t worth it. I found SOS at Metro Diner in East Brunswick.

Tonight happened to be SOS night… Not Calandra’s but still tasty. 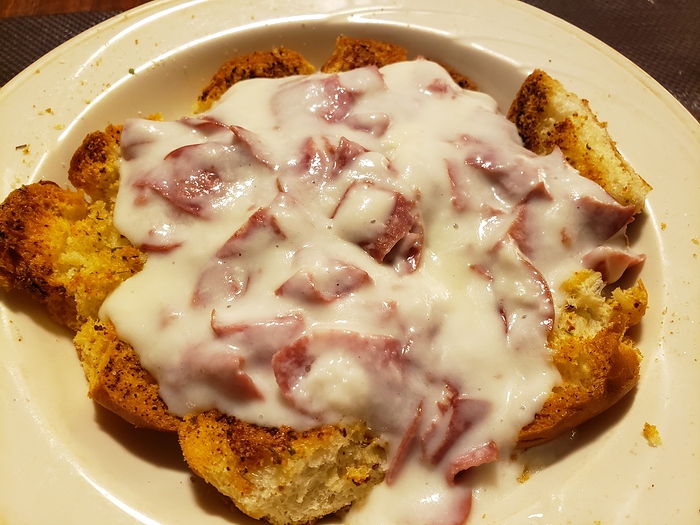 Yes - sorry. I stand corrected. We used to go to a great little French-Maylasian restaurant in Franklin Square.

I only stopped at that diner once. Had a pretty good Reuben sandwich.