Last day of January and I’m squeaking in a new lunch thread. My this month has flown.

Saturday I drove to Westgreen in Katy for a touch of my favorite American-Chinese restaurant’s Shrimp Chow Mein preceded of course by the tasty fried wings at Chang’s. The other half always orders mu shu pork. He switched to mu shu shrimp and loved it.

What are you lunching on? 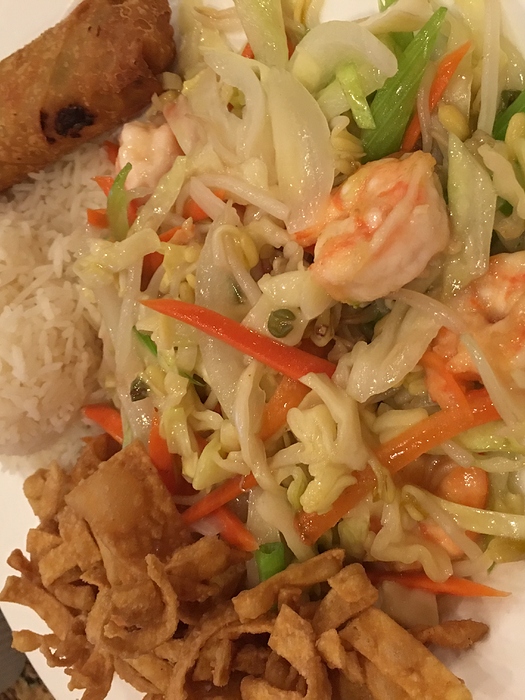 Day Three of my Chicken Soup Therapy Regimen today (yesterday was home-made); I went to Kenny & Ziggy’s, West U location. Never been to this location, never had the CS at K&Z but have the fondest memories and everlasting gratitude for the chicken soup at Alfred’s in the Village and it’s amazing healing and restorative powers. It was always served hot.

This was presented ‘dry,’ with the chicken breast meat (large pieces), egg noodles and vegs in the bowl and a stainless steel cup of broth to pour over it. I took several samples of all ingredients before combining them; good thing I did - the bowl would have overfloweth otherwise.

The broth was not hot. Boo. On the positive side this is one item at K&Z that isn’t outrageously priced. You get a generous bowl for $8.95. But I make a better chicken soup. I didn’t yesterday, just threw some broth and a few veggies in a pan and warmed them up. But I guess I’ll be back at it tomorrow. I haven’t made it in several years. I’ll have to dig out the Williams Sonoma cookbook I got the original idea from.

My dining companion had the Chicken Pot Pie - an awesome presentation to behold with it’s flaky topping. Sorry, no pictures.

Luke warm soup is a no no in my book, like I’ll never order your soup again if I even return. It’s unforgiveable.

Whenever I go to Ciro’s I order the cream of red pepper soup. I’m not even a fan of red peppers, but that soup is really good and always served piping hot. That earns my repeat business.

I haven’t had tilapia in years, but I’ve been on a fish kick, and so I have had this fish twice this week! So good with brown butter and a toasted hazelnuts. I love it. Pappadeaux 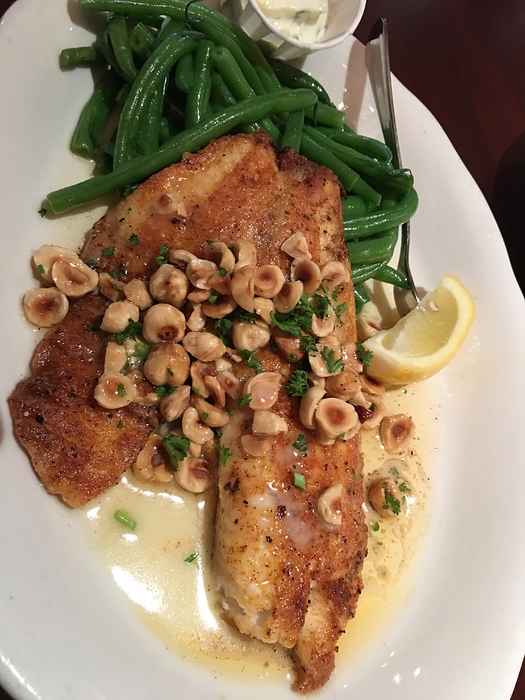 Started with their version of campechana, delicious.

Haven’t been to Pappadeaux in years. partly just because portions at Pappas restaurants are so huge and I can’t eat like that any more (well, maybe every now and then).

How on earth have you managed to avoid tilapia for years???

How on earth have you managed to avoid tilapia for years???

I read one of the scary articles about Chinese tilapia and stopped buying it. I’m sure this was responsibly sourced though. The Pappas run a quality business, even if they do serve massive quantities. I often thought they could bring their prices down by reducing the size of their dishes, but I guess that’s what their customers want. This dish was a good size. I rarely finish a restaurant meal but I ate all the fish.

I wasn’t going to say anything about tilapia but since you brought it up I’ve read several scary articles and won’t touch the species.

Call me a fish snob but after years of catching many hundreds of speckled trout, redfish, flounder, and red snapper I just can’t deal with questionably sourced tilapia.

Having said this I only fished a few times last year so I have to rely on MY HEB for Alaskan cod or USA farmed catfish depending on preparation although I do prefer wild caught.

You know, I’m with you. I got so snobbish about tilapia in years past that when I see it on a menu, I don’t want to even eat at that restaurant, since it must be second rate. And I’ve seen a couple of snobbish articles writ to that effect also from some of our food writers. However, don’t believe all you read. This fish was flaky white fresh fish, and as I said, I ordered it twice this week. I guess what brought me back to tilapia is this restaurant family, the Pappas. Trust, you know is a big thing for me. I won’t even buy Blue Bell ice cream anymore, because that trust is broken. Trust, quality and value is important.

Made it to Fountainview Fish Market for lunch. Overwhelmed by the bustle and menu, I said “Me too”, to the Catfish Combo with two sides and a can of Coke, (which is in my fridge still unopened - I don’t do soda).

There were no open tables but a very chatty lady saw our plight and took pity assuring us that she was waiting on a to-go order and we were welcome to join her at her table. She was sweet.

The plate came with three small to medium catfish fillets and in my case fries and cole slaw. After having the time to sit and peruse the wall-mounted menu, I might have ordered something else, maybe shrimp and oysters. Also I noticed two other sides I might have preferred, onion rings and egg rolls.

The fish was nicely crisp with a corn meal crust. The fries were from frozen and mediocre, the cole slaw was fresh and crisp but bland.

They had fresh fish of various kinds including yellow fin, flounder, freshly shucked oysters, and several sizes and styles of shrimp. They seemed a bit pricey to me, but I’m cheap. The lunch plates are quite reasonable however.

I liked it and look forward to going back. I’ll bet the fried oysters are excellent.

Good to see ya post! If your can of coke is diet, I’ll take it, but I hope it’s a DDP., i.e. diet doctor pepper. Planning a trip to the Waco area from which it was concieved. I’ve already been to the Dr. Pepper Museum so you guys suggest me some good eateries instead. That don’t involve bikers.

With you on the Blue Bell i/c all the way. Never again. Tilapia is everywhere, possibly even surpassing catfish locally on menus. I haven’t had any in a long time, not sure if that could be counted in years, though. I don’t remember off hand the negative articles but I know it didn’t get no respect on CH; and lots of people say it tastes muddy.

Swai/basa is another fish I can’t abide. Wiki says it’s a firm fleshed fish ---- not any of the samples I’ve had. The texture of what I’ve had gives me the willies.

@ JC - I still miss Total Catch. I’ve never found a place that offers anything like that.

I’ve already been to the Dr. Pepper Museum so you guys suggest me some good eateries instead.

As I recall Shillcut went to Baylor and posted several times about eats in Waco, although maybe that was just college eateries. You might try to look up some old articles in the Press. The TMBBQ blog could help with bbq in the area, but you’re not a bbq person.

We get egg rolls for sides and bottled water for our drinks. This place is like BBQ Inn as you can order seafood by the piece, not on the menu but an insider tip.

The raw seafood is quite high and the price for shucked oysters are off the charts. I guess the Memorial area people with pockets far deeper than ours are the prime consumers.

I forgot to say we’re all oysters and nothing but oysters. We’ve had the shrimp and catfish, very good but we’re all in on the oysters to the point of ordering extras.

A very short debate is do we want shrimp or catfish and the quick answer is no, just more oysters.

I introduced the deprived Rio Grande Valley girl to the joys and wonders of the bivalve when we met and she hasn’t looked back.

I introduced the deprived Rio Grande Valley girl to the joys and wonders of the bivalve when we met and she hasn’t looked back.

Can we assume you were trying to impress her with the “even the crustiest old shell sometimes contains a pearl” metaphor?

Can we assume you were trying to impress her with the “even the crustiest old shell sometimes contains a pearl” metaphor?

Me thinks in this case it was the joys and wonders of the individually shaken margaritas at Pico’s on Bellaire during our courting days followed by the introduction of the noble ostione.

Are you calling me old? I get enough of that at work and I’ll put you on the list of “thugs” when I call HR.

I have found a number of pearls, plus or minus 10, generally not so good looking kinda like…

y’all are so funny

I’d have to injure the guy if I didn’t like him so much, I think. 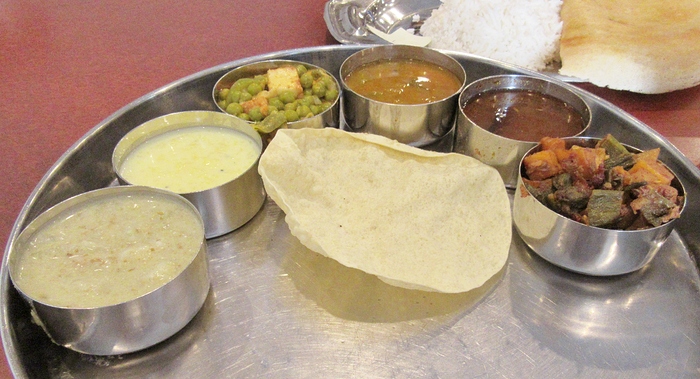 Thali - from the left, potatoes, Kheer, peas and cheese (Mattar Paneer?), Sambar, Rasam, potatoes and okra and a pappadum, 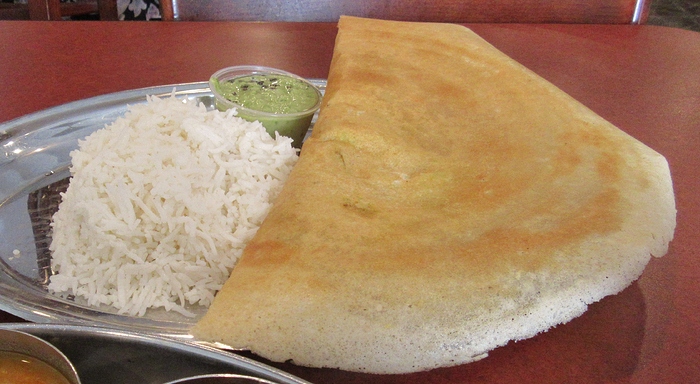 This is called the Madras Thali at Shri Balaji Bhavan. It’s what I had the first time I ever went there several years ago and I’ve been thinking about it lately. When I saw a parking space right in front of the door around 3 this afternoon, I zipped in. There was no line - never seen that before at SBB. It seemed to me tables were more spaced out, too. Maybe they don’t draw the hordes they did a few years ago.

Help yourself to a stainless steel tumbler and some chilled water; take a pitcher of it if you wish. Grab your own silverware. And now you go up and claim your order at the counter, instead of it being brought around. Maybe that’s just because I was there in the middle of the afternoon.

I think there were more elements on the tray before, no empty space, and you got naan instead of a dosa. Still, for $8.49 (daily special) it’s a bargain. I’ve long said SBB makes the best Masala Dosa in town though there are probably better than 50 places that offer it I’ve never tried

. I wasn’t as impressed this time as I’ve remembered.

There are no explanations of the dishes offered on the menu. I left most of the potatoes behind - they were unremarkable and I had potatoes in two other forms; everything else was very good and a couple of the items had a nice level of heat.

I brought half the rice home and maybe 3/5ths of the dosa and most of the chutney. I don’t think it’s going to be possible to reheat the dosa itself. It’s got a texture right now in the fridge like refrigerated potato chips!

Do you choose your own dishes, or is it the same for everyone? Haven’t done thali before.