what will you ALWAYS order out rather than make at home?

These names are very familiar, but I don’t know them. I better rent a movie.

Charlotte’s Web, my friend. A book, made into a movie or two:

Oh, I have not seen that one. The one poster I do remember is this one: 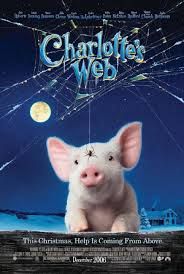 I will watch your link soon. I am not in an area where I can watch video.

We don’t think of pigs as very smart

I think of pigs as very smart. I had thought it was very well known they are smart. I once lived around a lot of cows, and they had obvious emotions, etc. And of course deer are remarkable.

I commend you for not wanting to kill intelligent creatures, especially if it just a taste preference not a genuine need. But the list of smart creatures sold as food is very, very long – maybe longer than most of the people we know!

I kill spiders without one microsecond of guilt, too.

Spiders eat mosquitoes. That is enough for me to let them hang around the house, unmolested.

We build social websites with groundbreaking tech --> See what our platform can do for you: http://rbl.ms/2aydqTl

Maybe it is just me. I feel like it is one of those things that when “asked” then people are asked if pigs are smart, but they don’t think of them as intelligent beings on a daily basis. What do we call this? Compartmental something or compartmentalize something.

Kind of like octopus and squid have different intelligent levels, but we kind of just treat them like the same thing.

What do we call this?

Pigs are such cool animals and smart of the standard market animals that I really do feel bad about eating them and how they are raised and slaughtered - unfortunately they are so darn tasty.

apparently octopi are so smart because they are aliens

Shocking Claim: Scientists Think Octopuses Might Be Aliens After Studying Their...

Are octopuses from another planet?

It get to another philosophical question. Is a life more valuable based on its intelligent? I know we often refers intelligent as a reason we kill or not kill a certain type of animals. But I cannot help but think that is just the way we (human) try to justify our position because we think we are more intelligent.

If a very vastly intelligent alien race comes to Earth, would it suddenly make it more acceptable for them to kill us because of their intelligence? Clearly, we don’t really believe that.

Or get back to us human, is Albert Einstein’s life more worthy than a moron? I don’t mean his contributions. I mean just purely being intelligence. Let’s say he is just purely smart but he has never invent/discover anything, is his pure intelligent capacity makes him more important?

Clearly, we don’t really believe that.

No, we won’t but they will!

What do we call this?

Pigs may take a longer view.

Is a life more valuable based on its intelligent?

I was reading an article the other day about some people who study dolphin migration somewhere, as a scientific team, and they have been doing this as a team for many, many years. Last year, one of the team members died, and when the remaining team returned to the observation area – the same one from the beginning – they were baffled that the dolphins, who usually made a great show leaping and frolicking when the team returned each season, stayed far away. Finally, one of the team members brought out a picture of the dead scientist, mounted on the front of the boat, and went out to meet the dolphins. The dolphins formed an escort guard and went through some kind of mourning ritual. The scientists felt fairly certain that the dolphins had been affected as a group when the guy actually died, not just when they returned without him.

I don’t want to get into a big wrangle about deer & suburbia, but my personal view is that I always though it was possible that the deer were helping by browsing suburban areas, and that in general deer survival behavior is worth learning from. (This is apparently what native American tribes thought as well, and maybe still do think.) In Hawaii, where imported-species-gone-feral end up eating a lot of the tropical flora, both deer and pigs have outsmarted just about every attempt to bring their numbers down. Their learning curve is much, much better than the people hunting them.

I am mystified by many things, and certainly by people who consider themselves more intelligent than most animals. My cat has figured out everything she needs to know about surviving, to a large extent by learning how to manipulate other animals, including me. And she is very small cat. (Yes, she is watching and I am being forced to type this).

that the deer were helping by browsing suburban areas, and that in general deer survival behavior is worth learning from

In all seriousness, (you probably may think I am joking) is that we bought the deer population without the wolves. We really need the wolves. However, I don’t know how to bring the wolves population up without people freaking out. Yet, clearly the deer population has no counter point. There isn’t a single animal species (except human) can kill deer in US. We don’t have cougars, wolves, or bear running around in suburban of course.

It get to another philosophical question. Is a life more valuable based on its intelligent?

Spiders eat mosquitoes. That is enough for me to let them hang around the house, unmolested.

Weeellll… there are poisonous spiders, you know. As in the Brown Recluse Spiders that are aggressive and have a venomous bite. Which my daughter learned one fine Spring afternoon when she phoned the Harvard Entomology Dept. to report spiders she found living in the photo lab where she was developing negatives. They immediately sent a team of scientists who caught them to study, then destroyed the nest. and fumigated the lab. Close call for DD, but she’s a quick thinker.

and stroking the fur of dogs and cats is soothing to us because it recalls primordial mammalian sense memories.

Not only do I put down the hamburger, seized with the impression that eating a cow is tantamount to cannibalism, but my feeling of solidarity for mammals strengthens my feelings of pity and pride regarding that particular branch of the mammal family known as homo.

Pigs may take a longer view.

If only they could. Besides, if they were top of the food chain, they wouldn’t hesitate to eat us. Cuz they’ll eat pretty much anything… intelligent or not.

In my view, it is a matter of “strength” not “intelligent” which dictates the outcome. We should not pretend there is a moral high ground for us to eat animals because we are smarter. We eat them because we are in power. If one day, I am empty handed in Africa wildness, then maybe the a lion will eat me. Again, it is not because he is smarter. He is just stronger in that case.

Let’s not attach any moral reasoning to eat animals because we are smarter.

As I said - top of the food chain. We are. For many reasons, intelligence being one of them. I am certainly not stronger than a cow or a pig.

Same here. Where I live, I don’t think there are any poisonous spiders, and the number of bugs in a web is very impressive indeed.