What makes a good poutine? [Ontario]

Montrealers, I have a question for you connoisseurs of poutine. I am no expert when it comes to poutine. A branch of Smoke’s Poutinerie has opened up in Berkeley, California. Smoke’s as I understand it, is a chain from Ontario.

Now, to my untrained poutine palette, Smoke’s is rather bland and not very good, and I suspect, is doing poutine the dish no justice by slapping the ‘poutine’ name on their dishes.

In your fine city, what are some of the criteria that make certain poutine dishes a good version? Is it preferable to stick with the standard version or the plethora ‘gourmet’ versions that have all the fancy ingredients?

Good fries are the base of the poutine. To me they have to be double-fried using, preferably, peanut oil. They have to be crisp enough on the outside to withstand the sauce but steamed and creamy inside. I like them golden and slightly sweet. Looks roughly like this: 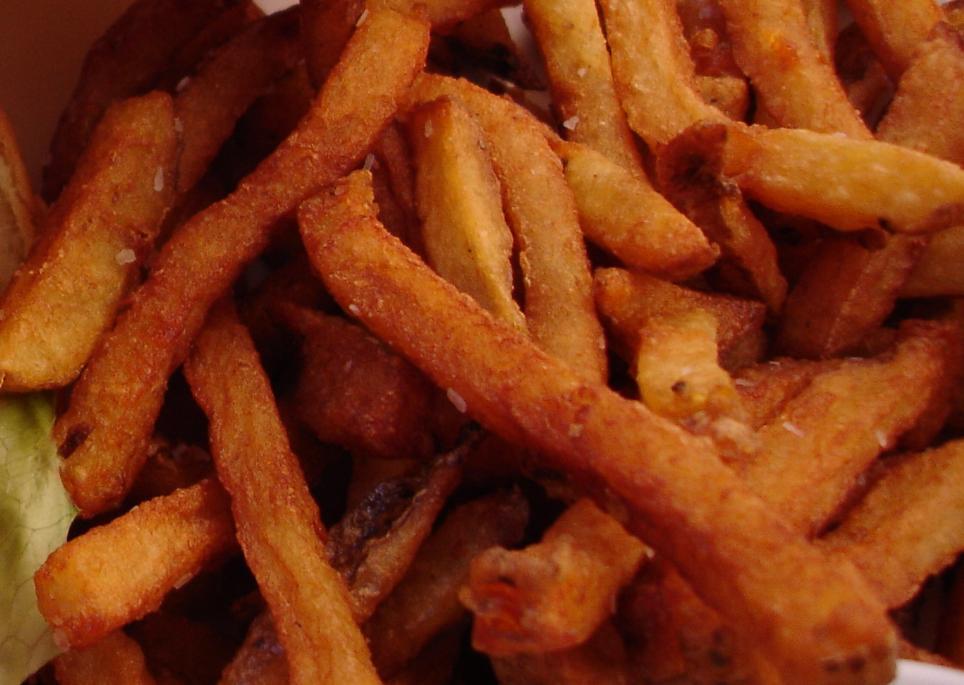 That is the most contentious element of the poutine. All fries enthusiasts have their version of favourite fries and most poutine amateurs can come to an agreement to the elements leading to the best cheese to use but the best sauce leads to pretty strong discussions.

You have to understand that the original poutine sauce was essentially a the standard BBQ sauce that came with fries. The poutine was born when a guy asked the owner of a greasy spoon to put the cup of sauce and the content of a plastic bag of locally produced cheese they were selling on the counter in the brown bag that held the fries. The owner of the greasy spoon is said to have told his customer “its going to be a hell of a poutine”, meaning “its going to be a hell of a mess”. Since it was a small city, people started to order a “poutine” and the trend was born. The place still exists (its called Le Roy Julep in Drummondville) and it is interesting to note that the biggest challenge they had was developing a container that didn’t rip from the contact with the sauce.

I had the Roy Julep poutine and the BBQ sauce on it is pretty special. It seem to have a tomato base and seem to be slightly sweeter than other poutine I had. You have to understand that the poutine sauce evolved to a point where enthousiasts (should we call them snobs?) insist that any sauce not clearly labelled a “poutine sauce” can not be used in a poutine and that, no, a BBQ sauce is simply not the same.

Actually, what we call “BBQ sauce” does not have the consistency of ketchup. Its closer to gravy. If you can put it on an hamburger without spilling its too consistent. If it is too runny to put in a hamburger and you have to dip something in it (like a piece of chicken) then it should be of the right consistency. Think of “hot chicken” sauce.

Here’s a recipe that looks ok at first glace. The chef is a well known tv show chef here. Caution: I haven’t tried it.
http://www.ricardocuisine.com/recipes/4854-brown-gravy-sauce-for-poutine-and-hot-chicken

The cheese used in poutine is called cheese curd. It is also sometimes called “squeeky cheese”. Its essentially fresh unprocessed cheddar. It used to be sold in corner stores and greasy spoon all over the province of Quebec. If you are lucky enough to live beside a cheese producer they will sell it in bulk day fresh. Fresh cheese will squeak under the teeth. It is not essential that the cheese squeeks and even in Montreal finding curds fresh enough that squeeks can be hard so don’t worry if yours doesn’t squeek. A poutine needs cheese curds however in order to be a poutine. Any other cheese doesn’t work. Its the cornerstone of a poutine. Without proper curds its just a fries with sauce and cheese 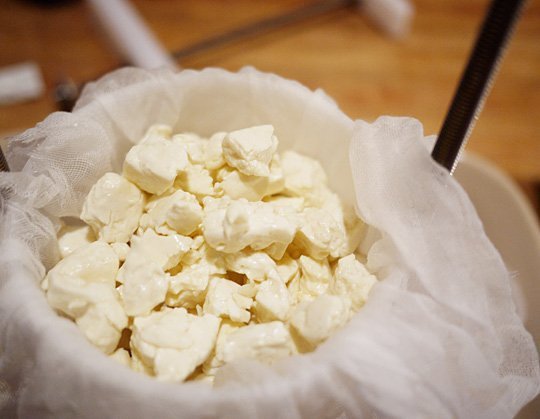 Some early poutine variation uses spaghetti sauce. Its called an italian poutine and its not really a poutine but close enough. When I was young there were only two styles of poutine: standard and italian. 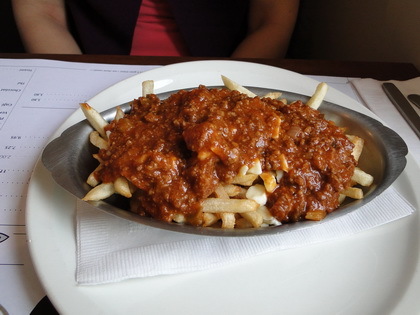 Some greasy spoon uses shredded mozarella instead of poutine. To me its not a poutine. 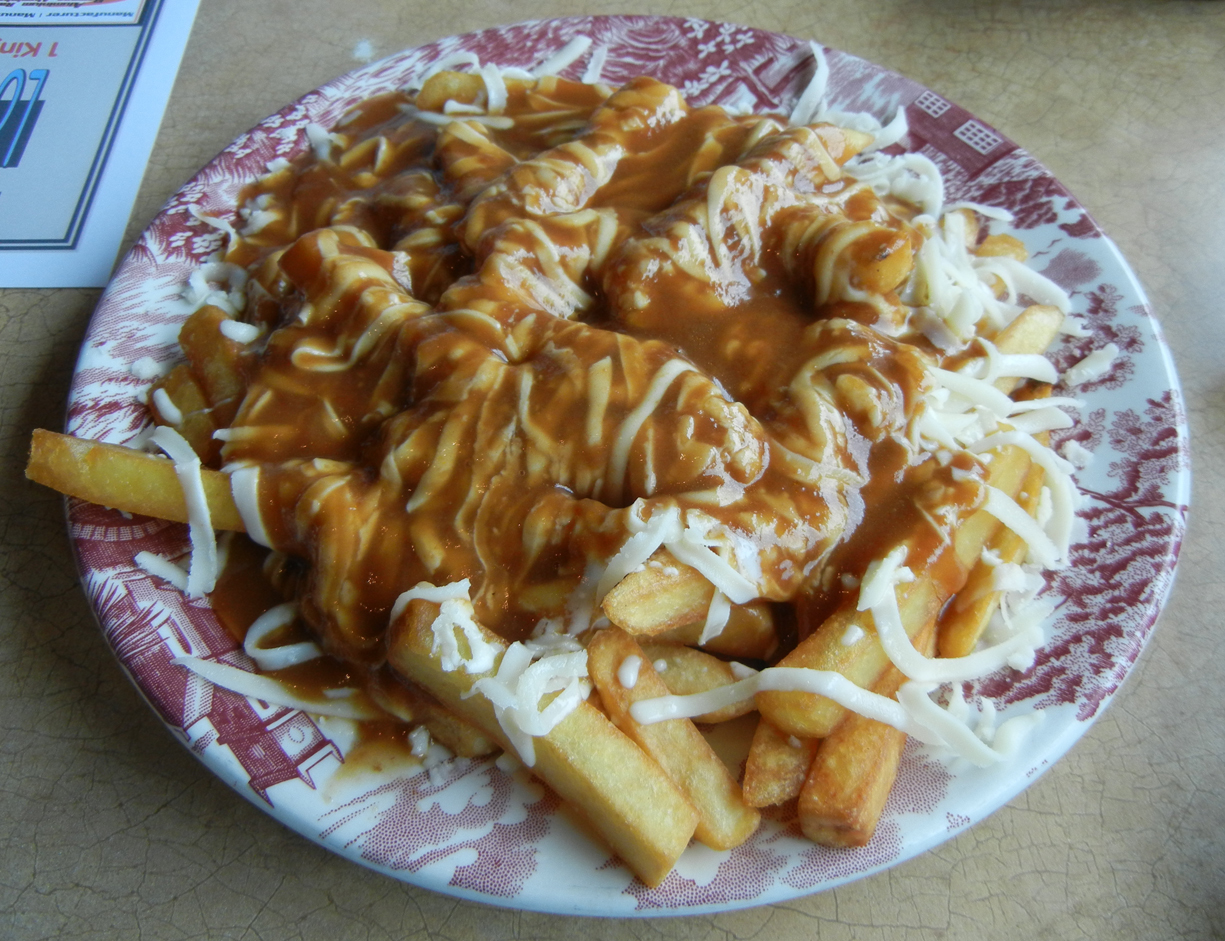 If you have all the ingredients right, the quality of the poutine will depend, on my humble opinion, to the quality of the fries. Other will say, however, its the sauce. Cheese is binary: its either the proper cheese or its not. Squeeky fresh cheese help with with crappy fries its still a crappy poutine.

And now for something completely different, or not:

What makes good chili cheese fries or nachos – same concept of beloved fried base topped with sauce and cheese.

I dislike poutine (like frites to be crisp) so I’m useless here!

To answer the op, simplest is always best. I have no need for extra toppings when the original is so good.

Gravy should be peppery and the fries hot enough to slightly soften the cheese. Yum.

Capt, I had my first Poutine experience in a small town diner in Ontario. That place used brown gravy–not BBQ sauce. Came away with the thought “meh”.

It’s not the gloppy sweet BBQ sauce you know. It is supposed to be brown gravy… Captain is calling it BBQ sauce because that’s what is served with rotisserie chicken up here. It’s like a slightly zestier gravy, but its gravy.

Yeah, the mistake is mine.

If you are french canadian, there are two type of sauce you could call “Sauce Barbecue” (BBQ sauce), one is a ketchup like gloppy sauce you put on ribs and pulled pork, the other is a thin gravy coming with BBQ Chicken.

BBQ Chicken is a spit roasted chicken that is a very popular style here. You can get a leg, a breast or half a chicken and it comes with cole slaw, fries and something we call “BBQ sauce” but its actually gravy.

That type of sauce is also served as a dipping sauce for something we call “frite sauce” or “fries with sauce”. Its that sauce that was the original poutine sauce.

It evolved with time, becoming zestier and a bit more seasoned but at its base it is very similar to the sauce coming with BBQ chicken. That’s why if you don’t have any poutine sauce the reflex for me would be to look to a good “sauce barbecue” when in fact I should be calling it gravy. 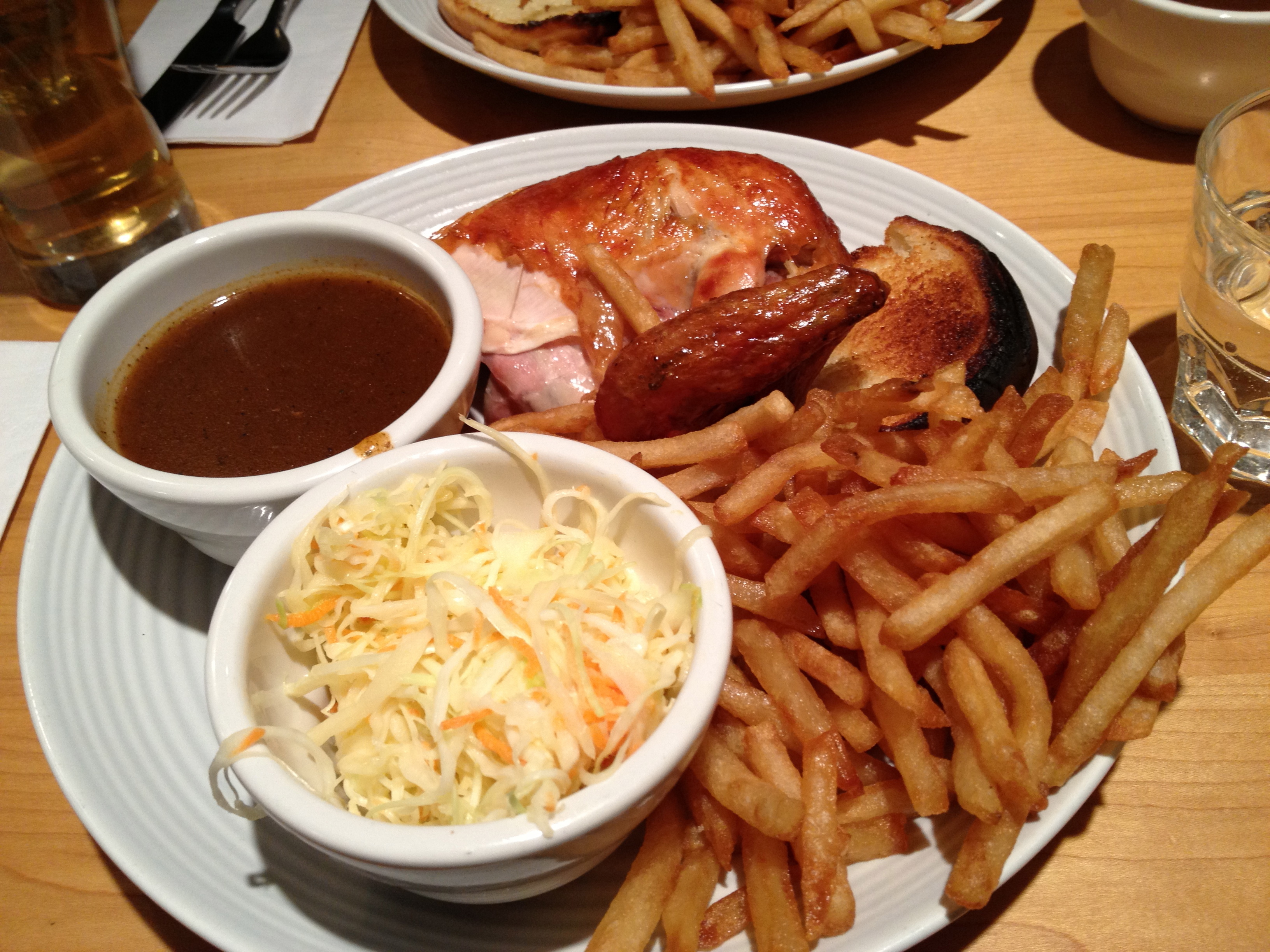 Like any dish, not everybody likes poutine. It even has a lot of detractors in Montreal!

you are forgiven because you are French! haha

your written English is actually very good, I only see the odd typical Franco mistake here and there. For example, “the sauce coming with BBQ chicken”, should be “the sauce that comes with BBQ chicken.” In any case it’s much better than my written French!

I had fun looking at the type of poutine recipe someone outside Quebec might have access to.

This gravy doesn’t look half bad although a bit complex for something so simple­. I would try it though!

What this guy does with fries is criminal. The concept is not “twice baked”, its “twice fried”. You fry it once to seal in the potato meat with a small film. You fry it again to steam cook the potato inside the fry and crisp the outside with a golden crunchy layer. If you do your first “fry” in an oven, you won’t have that first film of fat to seal in the fry and you will get limp fries.

Using fresh mozzarella is not a bad idea but curds are firmer and way saltier as the fresh ones tend to have a bit of a briny taste. I’d prefer fresh mozzarella to grated cheese but its still not a replacement to curds!

Also, I’m not a big fan of his fake “radical dude” attitude. Yes, in my case it is because I very much like good, crisp frites - and don’t indulge in them often. I prefer them the Belgian way, served with a spicy mayonnaise.

With that chicken - or perhaps with a Chinese bbq duck! Marché Oriental near me has them in their window - not expensive at all.

Yeah, I was looking for a picture that represented my last meal at Chalet BBQ