What is your opinion of Mission Chinese Restaurant?

What is the story here?

Danny Bowien was interesting in The Mind of a Chef, he seems to have a high culinary acumen. The restaurant has won all kinds of awards, 2nd Best Restaurant in by Bon Appetit and 4th Best by GQ Magazine.

Yelp, on the other hand, hates him.

Who do I believe? What are HOs thought on Mission Chinese? Destination worthy? Should I cook through his cookbook?

3.5 stars isn’t bad. Yelp is where haters go to hate, so while it can be entertaining to both write and read bad reviews, take them with a grain of salt and decide if their complaint is one you’d share.

I’ve been to the one in nyc and I enjoyed my meal. It was a while ago and I wish I could remember what I ate, but I do remember thinking I would like to go back.

I’ve eaten many times in the NYC location, both at the old location and the new. It’s very good. I’ve liked all their noodle dishes, especially the green tea. Their broccoli beef is excellent, and their salt cod fried rice is among the very best fried rice dishes I’ve ever had. I have the cookbook, but have not cooked from it.

I don’t know how much involvement Bowien has in the day-to-day operations of the San Francisco restaurant. Even before he started his other ventures, the food was wildly inconsistent. Add to that the divisiveness of his umami-heavy style in the first place, and I would not recommend it to someone coming from out of town.

At the best of times, and not in a burrito, his mapo doufu is excellent. However, Fuchsia Dunlop’s more traditional recipe, which is way less fussy than his recipe, is more suited to a home cook and produces equally great results if you have quality ingredients.

His kung pao pastrami once was great, and devolved into bad takeout Chinese.

My favorite dish has been his thrice cooked pork with rice cakes, vegetarian style, with bitter melon.

If someone is aware of it being more consistent or uphill recently, please let us know. I live within walking distance, and can’t think of another Chinese restaurant in the Mission that I’d be interested in eating at vs. driving elsewhere.

I haven’t been in awhile, but +1 to @hyperbowler’s mapo tofu recommendation. Their Westlake rice porridge with beef, crab and a soft egg is also a pretty good bowl of congee.

Thanks everyone! It has piqued my interest, that’s for sure. I have some pork belly in the fridge now, I might try making his crazy Polynesian pork belly tonight.

And I’m headed back to California in October, I’m making a stop in SF, this may be on the list. I’ll report back if I do.

I’ll second the recommendations for the Westlake rice porridge, broccoli beef, salt cod fried rice, and thrice cooked bacon. I’m fairly sure I’ve had that pork belly dish once and it was pretty decent, although I have no idea how close it is to the cookbook. The thing for me about Mission Chinese Food is that I’ve had really good dishes there often, but I’ve also had the same dish 3 months later where it’s become much worse. And then sometimes better again a month later. So you never really know what you’re going to get.

I haven’t seen Danny there in a long time. I assumed he’d fully moved to NY when he opened MCF there.

I would note that they deliver, which is a wildly superior experience to waiting on the sidewalk outside for a table. It is a bit of a mystery to me how they’ve managed to win awards and keep everyone’s attention for this long. I’m generally positive about them, but I’d never wait in line for their food.

Of course Bowien seldom shows up in San Francisco because New Yorkers are more easily snookered by fads, and he’s hung up on his own celebrity.

Menu as of today. Sounds like they got rid of the burritos. 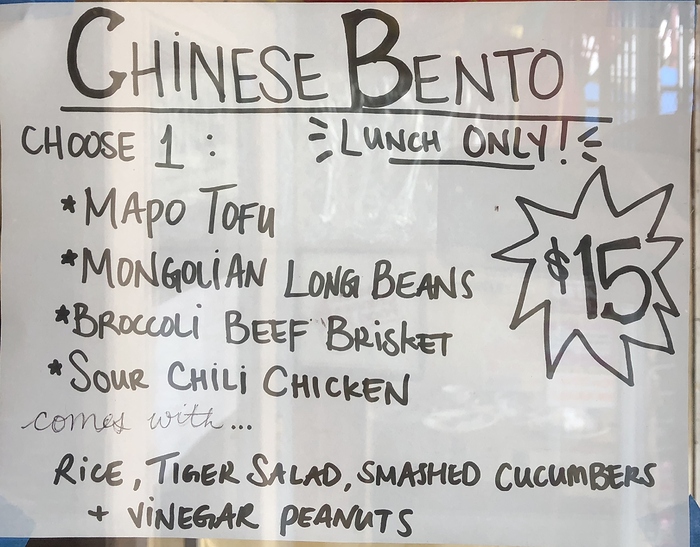 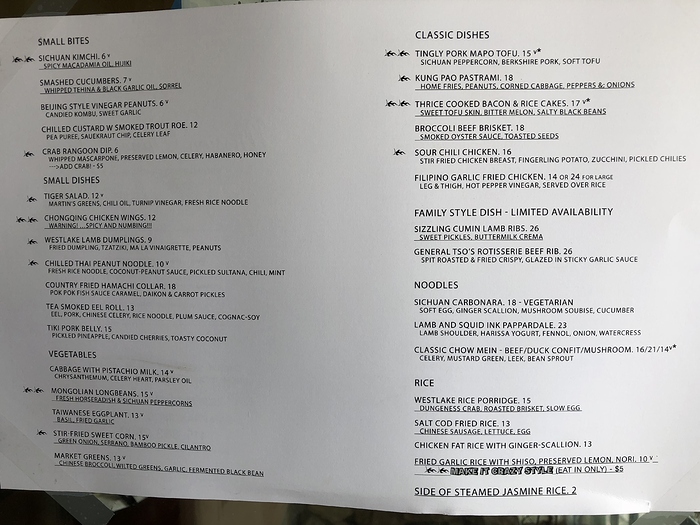 I was there a few months ago & tried the Chinese bento & it was pretty good a 4 out of 5 stars!
I’ve also had Caviar delivery from them as well & it was really good too!
The thing about them is, you have to remember that it’s not real Chinese food - just there take on it!