These look delicious. I am currently reading Aleksandra Crapanzano’s Gateau. She notes the version without the jam is from the Basque region of Spain. She likes to add cherries macerated in brandy or kirsch directly to the custard in the version she makes. I would be most happy to sample all of them.

That sounds like a delicious twist, too! This type of dessert is basically my ideal— buttery, not too sweet, not too rich, and perfect for eating in the afternoon when you want a bite of something sweet.
From what I’ve read there are two versions of Gateau Basque, with one being more like a pound cake and the other like a tart. The tart version definitely seems more common. And with the tart you have the insistence that you either use jam or pastry cream, but not both. But it seems fairly common these days to combine them because it’s an obvious winning combination!

My grandson (15) tried to make eclairs and bombed. I told him we will make some together when he comes to visit. And since i havent made any for probably 30 years i had to practice. I followed the recipe in French Pastry Made Simple by Molly Wilkinson. Its a great book. 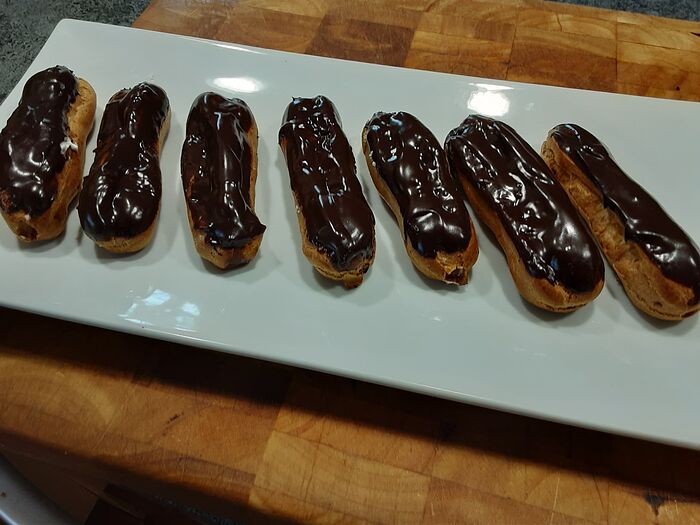 A variation of Dorie Greenspan’s World Peace cookies with freeze dried raspberries ( Have been try to source for OVER A YEAR and one my aunts finally sent some from Target in the States). Delicious version of one of my favourites… 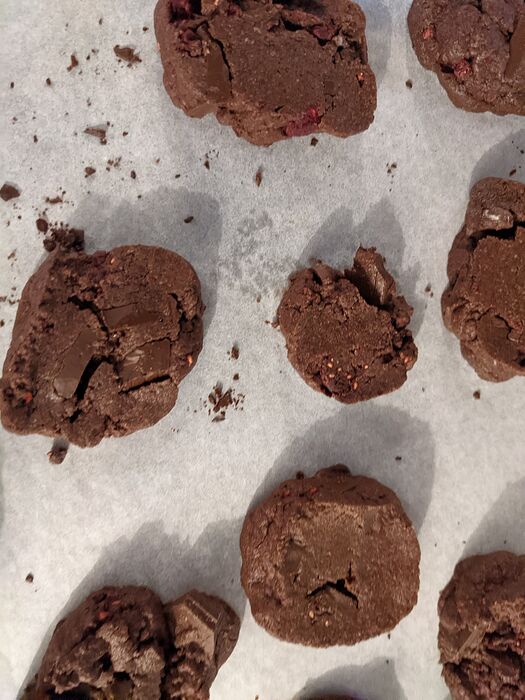 I heard her repeat (from a year ago) show on ’ The Splendid Table’ this morning. She talked about her remaking of the ‘World Peace Cookie’
splendidtable.org Episode 743

I really like what I’m reading. Haven’t made anything yet. Most of the cakes have flavor variation options. Also she says the French like their cakes less sweet than most American cakes so that’s another plus. Some of the cakes have soaks and/or glazes. Later in the book there are some savory cakes. I haven’t baked in so long I need to pick up a few ingredients.

It took every ounce of will I had not to cut into the panforte before a week had passed, allowing the flavors to settle. Today was the day!

It absolutely met my expectations. Dense without being sticky. Chocolately without being overly sweet. I love the textures offered by the figs and nuts. The citrus was not overwhelming, but a distinct note in the background. Will be making a few more of these to give as gifts at the holiday, and assume it will become a new, traditional, holiday treat for us. 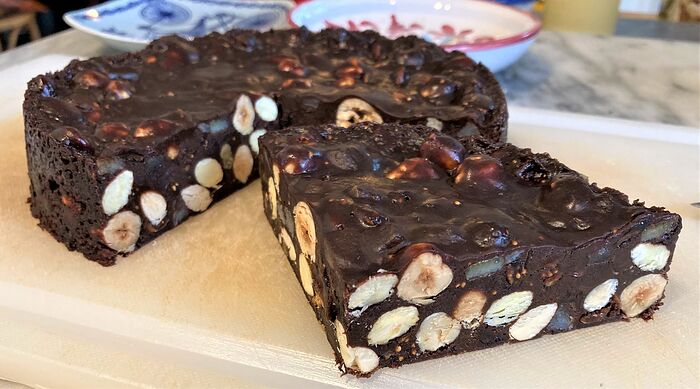 You have me wanting to make panforte again!

This is so good, I’ll have to pace myself!

Tonight: a super creepy version of Claudia Fleming’s Stout Gingerbread, served with her ginger ice cream (not pictured). Punchy flavours, perfect for a cool autumn evening and perhaps a seance. 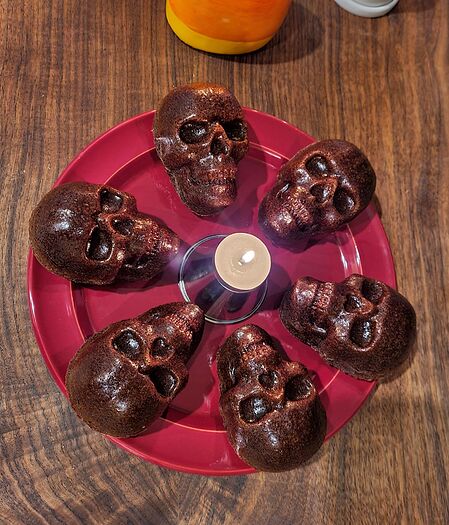 Schiacciata all’Uva aka grape focaccia. This is the first time I think I’ve completely made Claudia Fleming’s version (though I still made a few small changes because to me that recipe is written from someone who mainly deals in dessert rather than bread). The biggest change I made was to do folds every 30 minutes rather than trying to knead a dough like focaccia which is so wet. I have made the SK version of this recipe before and I have to say I agree with Deb that I think olive oil is just better here than butter.
Black grapes are not up to the level of Concord grapes mainly because they lack the tartness and intensity of flavor that a Concord grape has. Still, they’re not bad and I considered simply doing a squeeze of lemon to give me the missing acidity. In fact having tasted a piece with a bit of lemon has convinced me to toss my grapes with lemon juice for the one I’m baking next. It’s amazing how the touch of acid made this taste how I remembered.

I have another batch of these made with a different focaccia recipe that I like and uses olive oil. Unlike this one, I’m using anise on top. I decided to do two because I like rosemary and anise, and usually can’t decide on which to use for this. Both taste really delicious with the grapes! 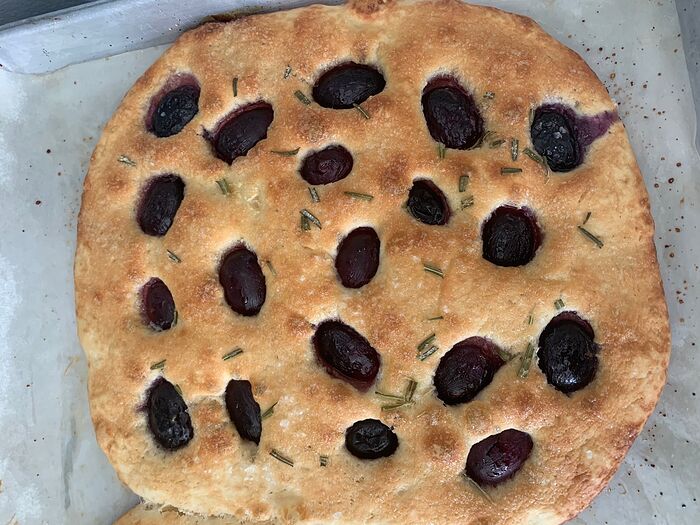 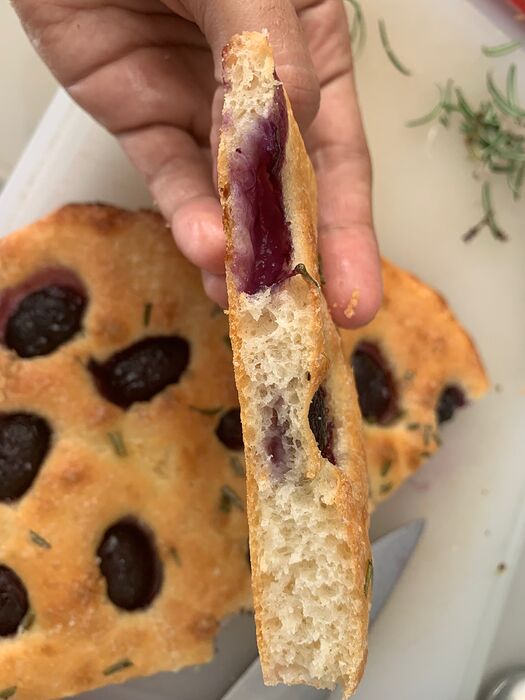 Schiacciata again, with anise and Emmanuel Hadjiandreou’s focaccia dough. Baked it darker than the others. 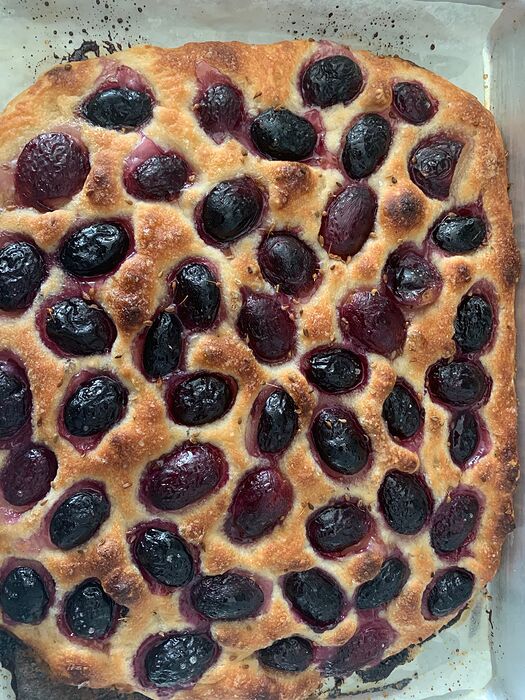 I’m not sure how it became November so quickly, but here we are, so here’s a new baking thread..

The link to the new thread is either broken or has been marked ‘private’ according to the error message.

Hmm. Well, this should work:

What Are You Baking? November 2022 Baking, Sweets