Lol. I’ve been trying to nail the baking time for these. I like them fully baked and crunchy, but it’s easy to burn them with all the chocolate, at which point they become bitter and inedible. I pulled them out at two minutes intervals and think I have it now. Of course they were all gone by the time I got to the end. So good with a cup of Blue Lotus Masala Chai!

You’ve sold me. So, how many minutes?

In my oven, which I swear runs a few degrees slow, between 22 and 24 minutes was the perfect bake. Also, I bake on both silpat and parchment, which probably slows things down even further. I would say check them carefully towards the end, especially if your oven runs hot.

The cookies in my photo run counter-clockwise from 20 minutes to 26 minutes at 2 minute intervals. The final cookie (upper right) was definately over-done.

(honeycrisp from our tree)

I was told those are particularly hard to grow, as the apples are heavy and the limbs, themselves, are brittle. What’s your experience?

We have two honeycrisp trees on M26 rootstock (superdwarf). They’re about 6-7 years old at this point, and in terrible soil conditions - shallow top soil over clay. They’re just over 5’ tall, which is about as tall as they will get, and the branches are not very big or sturdy. If I keep the apples thinned to about 12-14 per tree and keep the apples closer to the trunk, I get big, beautiful apples which store well. If I leave too many on, or leave them out on the tips of the branches, we get small-ish apples and have branch bending and breakage issues.

This year, only one of the two trees produced. In general, it was a terrible year for apples in my area - a lot of pollination problems. 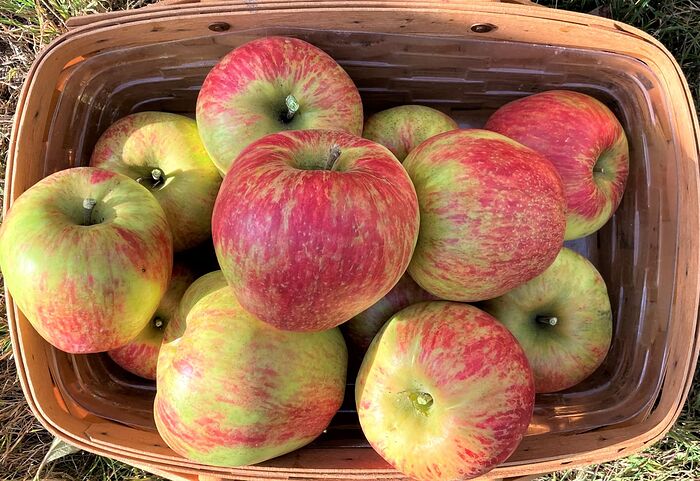 Thanks! I love honeycrisp. I’m planting a small, mixed, orchard within the next year or two and you certainly made these sound less scary than the last person I spoke to. I’ll just have to do a bit more research to make sure they can tolerate the climate here. It has been getting progressively warmer with only one winter night hitting -28C over the past few years. Previously, I’ve woken up to -38 for a week or more at a time. Selfish, I know, but I seriously don’t miss that extreme cold. Your apples look beautiful.

I hope the orchard works out for you! We did something similar into knowingly poor soil. Some things are doing worse than others (no surprise), but the Montmorency cherries are thriving. If we get even a little bit of fruit out of the whole project annually it will be plenty for us. 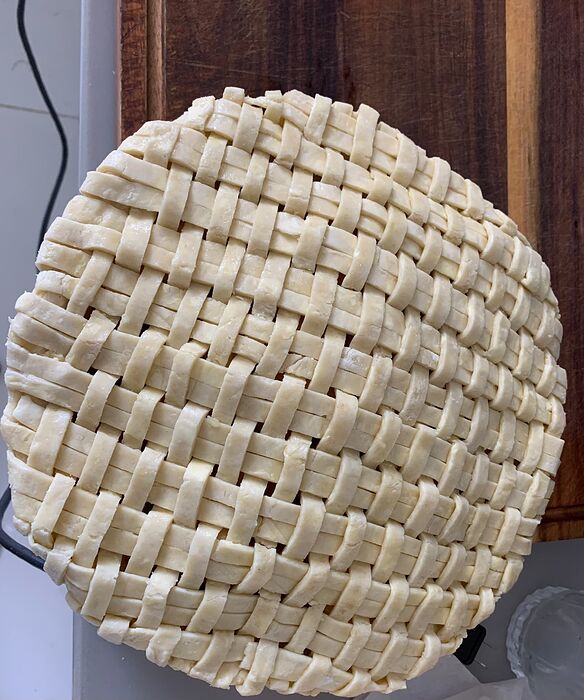 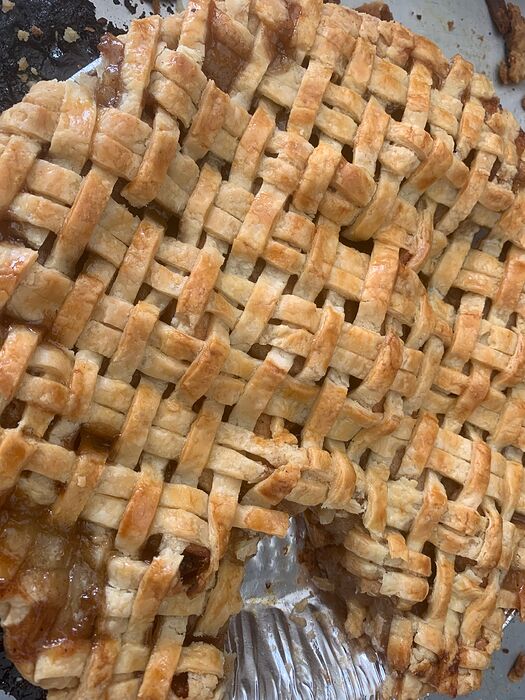 I bought some Golden Delicious apples with no idea what I’d do with them and figured it’s been a long time since I’d made a pie. Got it in my head to do lattice, but forgot that I need much less filling when doing lattice than a standard two crust pie. So I have extra filling that will either become hand pies or mini apple custard pies. Lattice in this climate is very annoying

. The temps have finally gone down, but they’re still a bit high during most of the day. I’d have to do one row then freeze briefly and it’s just not as tidy as it would be in nicely cool temps.
I used Stella Parks’ apple pie filling with only 120 g of sugar (200 grams of sugar is a crazy amount for an apple pie even with tart Granny Smith) and reducing the cinnamon to 1 tsp. I wasn’t sure about the cloves, but once baked they’re not bad at all. The filling is really delicious! Just the right amount of sugar!

Did you freeze or chill the unbaked pie once the lattice crust was on?

Yes. I did the lattice crust separately and froze that then put on the filled pie and froze again.

Lately in brioche mood. Made this Nanterre brioche (Laurent Duchene) this weekend, the dough didn’t rise a lot during the rest, came out ok, but would be happy if it could be more fluffy. Probably will switch to a static oven next time, the crust was slightly thick. 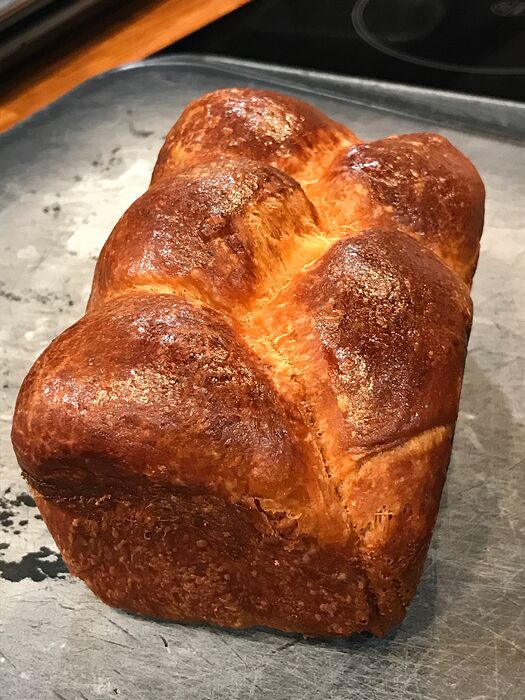 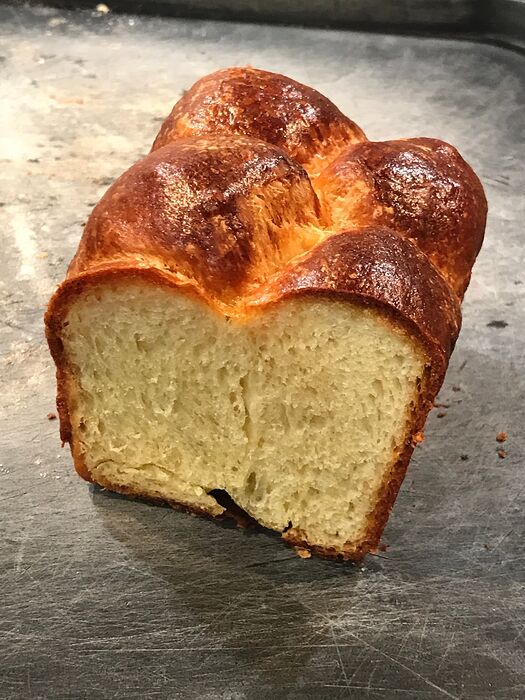 Today, baked this milk bread called orange Bressanse (Yann Couvreur) . More milk in ingredient when compared to the above recipe, orange blossom water and orange zest was added at the end of kneading. Dough made Saturday, rested in the fridge for 2 nights, and was shaped and rested for 3 hours. Before going in the oven, top was brushed with egg mixture, then sprinkled with a layer of brown sugar, holes pinched with fingers and salty butter added in each holes. An orange syrup was brushed on the top when the bread was still hot out of oven. Quite tasty. 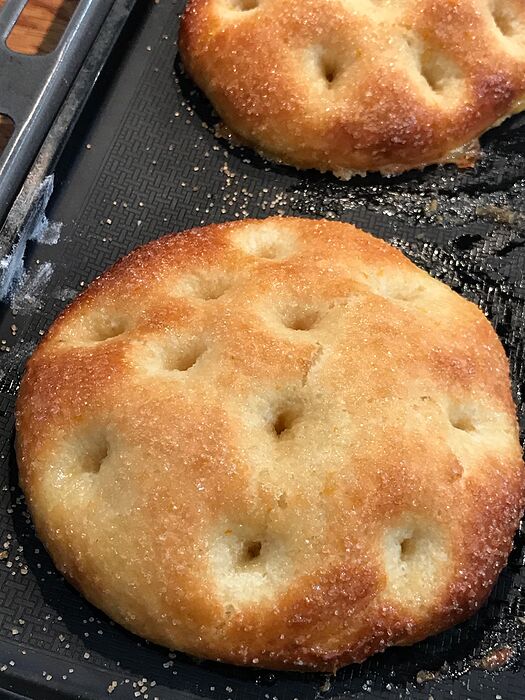 My girlfriend wanted something sweet, so I made a pineapple cobbler. She had a piece as soon as it came out of the oven. 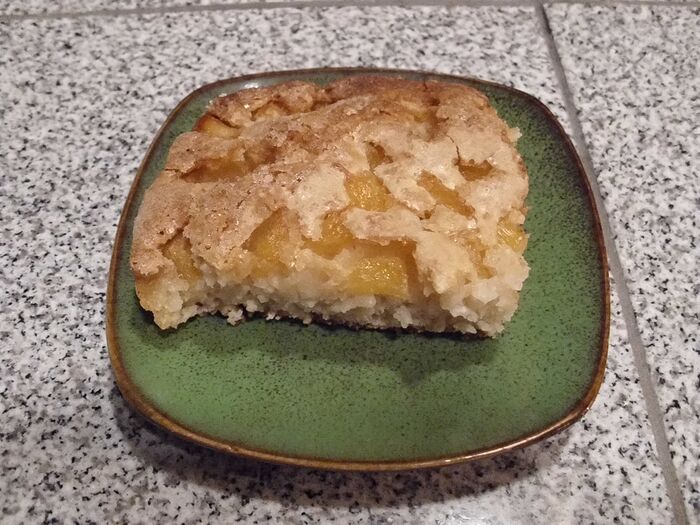 That brioche is what dreams are made of!

A long-gone pastry shop in town used to make a superb “Brioche aux fruits”. It was a large brioche, top knot cut off, then hollowed out, the inside coated with a thin layer of chocolate, then filled with a mix of pastry cream and fresh fruit, and the top replaced. It was great. I made it once; my first attempt at brioche, so it was not great.

Nice to see you here! I wasted three of my best apples this year on two mediocre apple cakes. Needless to say, eqally miffed.

I still have some mini pies to make with the leftover apple pie filling I have. Or hand pies. I’m having trouble deciding. Since I had one apple left, I added it to the filling. I wish I hadn’t now!

Thanks. I’ve several failed attempts over the past years, but never really worked on to understand why they didn’t work when at times I got a few mild success! This summer while traveling, I ate an exceptionally good brioche bought by h, very fluffy and tender. The next day, I went back to the shop to buy some croissants and noticed the price of that brioche was something like 12.5€ a loaf! (for maybe 1kg or 800g) That loaf lasted several days and never really dried out (I guess due to the high butter content). I decided to put in more effort to make that myself. Brioche uses some bread making techniques, so there is a learning curve and there are many different types to try.

The brioche you talked about sounds interesting, do you have a photo to show?