Out to dinner, order a glass of Chianti…big theater of it arriving at the table in a mini-carafe along with a stemmed glass, carafe gets poured into the glass on the table…but the glass is either hot out of the washer, or was sitting in the tray by the oven. Warm red sucks!

Not as much as warm white.

And have you never heard of mulled wine? You just had mulled wine without the spices.

Definitely. Did you address the situation at the time?

Nope, next time for sure tho

Shouldn’t even pay for that! It’s a crime they have committed to the wine.

On holiday in Egypt I was intrigued to try what was described as the local red wine. It was served to me topped up with Coca-Cola. If that’s not a wine crime I’m not sure what is. I didn’t end up trying it on its own but maybe I was saved from something worse. 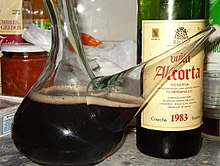 Kalimotxo, also known as calimocho, is a drink consisting of equal parts red wine and cola-based soft drink. Dating from the 1970s, it has become an icon of Basque culture. Kalimotxo is served in bars in short glass tumblers. Plenty of ice is added, then the red wine and cola. In other areas the drink is served in tall glasses. Sometimes Ouzo or anise flavoring is added. Another variation calls for a lime twist. A common way of serving kalimotxo is in one liter drinking glasses made of plastic,...

Quite some time ago, we were part of – but not a participant in this snippet of – a conversation that included this advice to someone about to vacation in Egypt.

First speaker to traveler: Do you know why there are so many Chinese?

Traveler: Huh? [Thinking: I’m going to Egypt and he’s nannering about the Chinese?]

First speaker: They cook everything.

First speaker: And don’t drink anything you didn’t open yourself unless it’s tea or coffee; and don’t even think about asking for ice for your bottled water.

Say something if your not satisfied. They are there to help.

Exactly. It’s like a hot out of the dishwasher plate for your salad. I’m not shy about asking for a new, chilled or room temp plate at the minimum.

I’ve never tried it either, it sounds so wrong, but then I think of all the ‘sangria’ I’ve enjoyed that was wine, orange juice, and a can of 7-Up. In that light, as a darker sangria, it sounds slightly more palatable. And the caffeine in the cola is probably a bonus when partying all night long.

We went to a place and got a nice bottle of red that was HOT. Apparently they have a floor to ceiling wine rack and this bottle was stored at the top - right next to a heating vent!

I will admit to having tried said concoction while staying in a hostel in Paris. I was already extremely intoxicated. It’s pretty vile.

Thirty-some years ago I had lunch in a then new Nashville restaurant, served by an excellent young waiter. Typical of the time, the wine list consisted of Red and White, so I chose the former to go with my steak sandwich. It arrived almost hot. He was baffled by my protests: “It’s supposed to be served at room temperature!” he said. And in which room was it kept? The kitchen, of course … I am happy to report that even Nashville has wised up a lot since then; the only warm red I’ve been served here in California has been in the sort of bar where one should never order that anyway.