We got over to La Campania last night for a special celebration meal. Really, it was fantastic…the rooms are as charming as ever, service very spot on, and the food was fresh and fantastic. Salads with creative vegetable combinations (artichokes 3 ways…greens), great fish/seafood. We drooled over many flatbread pizzas whizzing by us, and although we don’t eat meat, I noticed very lovely chops passing by as well. They’ve been around for quite a while, so don’t get the chatter on this board, but they are as good as ever, and worth a mention!

We got over to La Campania last night for a special celebration meal.

Great to hear. My husband and I hang our heads in shame when people who drive quite a distance to go there ask if we’ve been. I guess we should change that. We always joke that it’s too close.

Exactly…I was there once about 15 years ago for a big group party thing, but never went the 1.5 miles away from my house. It was nice and busy…loads of folks having a grand time. DH surprised me with the reservation, and I couldn’t have been happier with the evening.

Tell us a little more about Karibu, Tara

Since there was no intel on these places, I stopped by them on Friday. Had a chicken charcarero for lunch at Tara & it was good if not great. Plenty of chicken + avocado and tomato on the typical flatbread style roll. They have a bunch of different Chilean sandwiches in there, will probably try the lomito next time. Also got a cheese, a mushroom and a spinach empanada to go and reheated them for dinner. Not bad, the fillings were savory though the dough was just a bit greasy.

Also stopped into Karibu and got a spicy meat samosa that went into the dinner reheat. This was really excellent–a nice triangle of flaky pastry filled with ground beef, really peppery and with a bit of heat. They have some other African take out items and some dishes in a sort of cafeteria style setup. I’ll try to explore some more at a later date.

fish, great vegetables. However I’m not sure if they’re open for lunch.

I do like amuleto but they aren’t open for lunch (just FYI).

This may fall into the category of “non-pick” over pick, but I happened to wander into Waltham India Market after a multi-year absence and I was sorely disappointed, made unhappy even. Where was the mithai (sweets) counter at the front (right) of yesteryear? It’s Diwali, dammit, and I don’t want some sad, prepackaged sweets in the refrigerated section at the pack. I want to pick my own mix – a piece of Mysore pak (oozing ghee from every pore), a coconut chum-chum (slightly squeaky at every bite), a nice piece of soft kalakhand – well, you know the sweetmeat drill.

The food court downstairs, always odd (a mix of broken furniture and food), is even odder now. The different counters of the past are consolidated into a Pan-Indian one on one side and one that’s vaguely Ugandan on the other. The Ugandan had food in steam trays, but nobody to sell you any, and the pan-Indian had both food and an overly-aggressive counter boy-man trying to up-sell at every opportunity (if up-selling is the right word at such a down-scale joint). I order a masala dosa and he looks up hopefully and asks, “two?”. After that, 20 minutes elapse and the dosa does not appear. (There are precisely 3 other customers there.) I ask where it is. That causes a sudden flurry of activity among the cooking staff (all two of them). It’s ready a few minutes later and – just as I am feeling I have entered Dosa Inferno, and have abandoned all hope – turns out to be quite good. The dosa is thin and crisp, the potato filling correctly balanced between spicy and not-too- (that final punch being the role of the sambhar and the chutneys), and the sambhar has a drumstick (for those who do not know, a vegetable not a chicken part) or two.

Its been a while i buy lamp meat but does not smell like lamp meat. You know lamp has a unique smell that you will recognise it instantly. So what i am agraid that those crooks working in meat section are charging you 9.99$ for cow meat instead.

This may fall into the category of “non-pick” over pick,

Non-picks can be useful, too. They save us money, time, and calories.

This may fall into the category of “non-pick” over pick

heh. this is helpful anyhow. I tend to only go here for Indian groceries, which I think it’s good for. the only once over I gave the food court there made it seem a a little sad. and I never even knew that there used to be a sweets counter!

The food court downstairs, always odd (a mix of broken furniture and food), is even odder now.

I agree with this assessment. I don’t think they do much business. They used to have the pani puri stall and the fried chicken place. I’m not sure I’ve ever seen the Ugandan place open. The hours are limited.

I do like to get their kababs raw and then cook them at home. I’ve only had the paneer tikka and the chicken tikka, but want to try the lamb next. Also, the chole and the paratha that they sell in the prepared food section is decent and reasonably priced for a quick meal at home. And, the groceries are fine although it is a bit confusing to find things.

realized today that I drive right by Domenic’s on the way to India Market, so I stopped an got a sandwich. Got the Serena, pistachio mortadella and provolone with house dried tomato and house marinated eggplant.

I got the Serena for dinner last night and it was a delicious combo. Thanks for the heads-up! The Dom’s Special Italian is quite good, too. 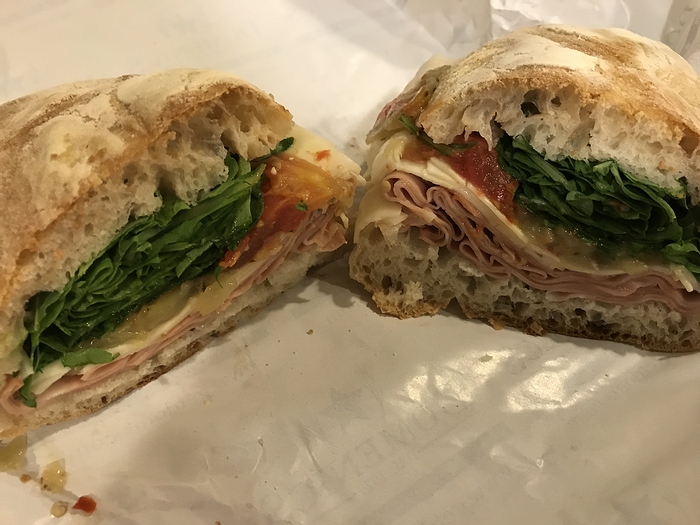 The Dom’s Special Italian is quite good, too.

well, it seemed only fair for me to try this one out for lunch today. Good tip! I got it with everything, and I really liked the chopped red onions they put on it. Made the whole thing work.

Got an arancini too. This place is great. Need to try those empanadas they make. 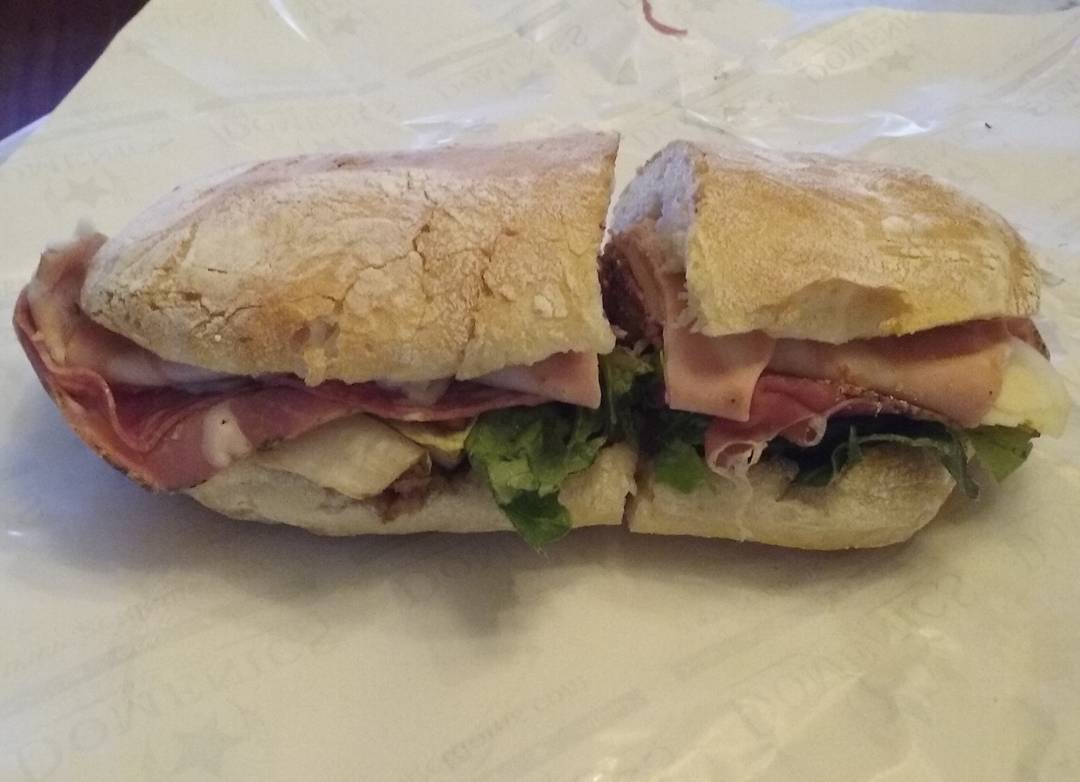 Need to try those empanadas they make.

I’ll looking forward to hearing about that. Because, empanadas.

I got it with everything,

Glad you enjoyed it. Nicely balanced and good quality meat. And of course, that bread. Please do report if you do try the empanadas.

The arancini heat up well in the toaster oven. Oh, did they give you sauce on the side? I didn’t get any when I got it to go, but think I’d like a little sauce for dipping.

did they give you sauce on the side?

they do keep containers of sauce right by the arancini that you can ask for, but I kind of like mine plain.

The person who helped him said that the additions to Moody’s will probably be ready late this year because of the construction involved.

side note: the Pigtrip guy went to Moody’s today and on his Facebook page he said he took a peek at the progress for the next door place and seemed skeptical that they’d be done before the end of the year.

side note: the Pigtrip guy went to Moody’s today and on his Facebook page he said he took a peek at the progress for the next door place and seemed skeptical that they’d be done before the end of the year

Oh, the wait. Thanks for the update!

this one could probably go into The Usual Suspects since I think everyone knows about this place already, but in working my way through Waltham on Fridays I finally got around to Mulan. It was really good–the dining room is super nice, it’s way convenient off of Route 2 and the food was excellent. I was a solo act, so only tried two dishes–salted crispy chicken (which had great texture and was juicy as well as salty) and pan fried Taiwanese noodles with pork (where the noodles had great chew, the vegetables were nicely cut and the accents of pork and mushrooms and bean sprouts really made for a satisfying lunch). I’ll go back here again, for sure.

Hilariously, I somehow ended up here at the same time as Peter Sward of Daily Lunch fame, but this wasn’t determined until after the fact when I posted my photos to Instagram. We ate lunch together without knowing it. So random. 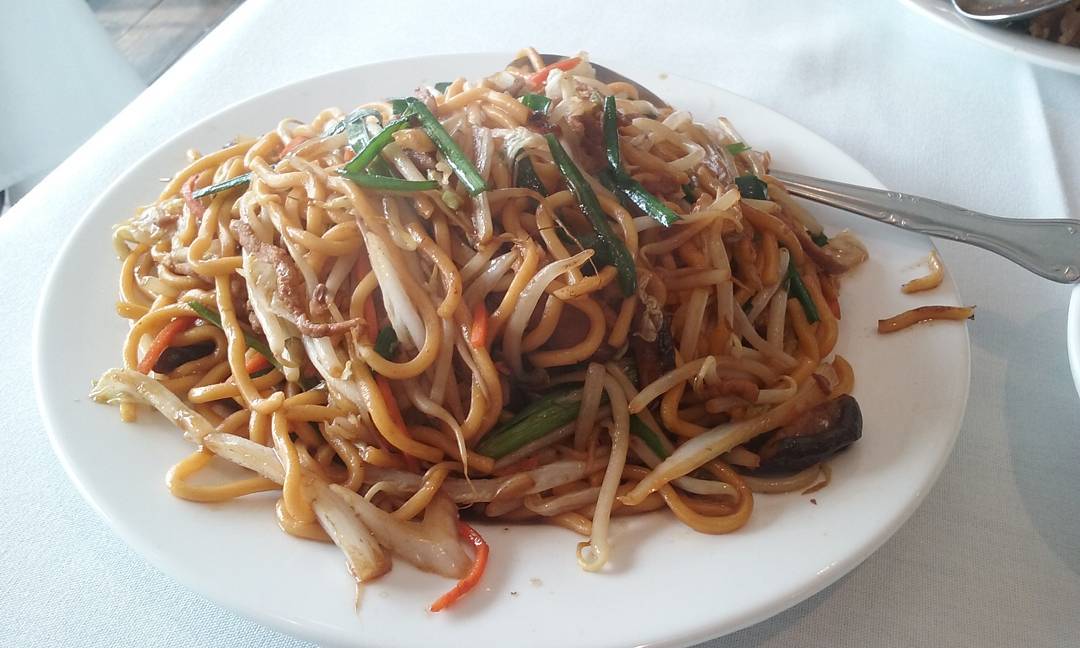 Hilariously, I somehow ended up here at the same time as Peter Sward of Daily Lunch fame, but this wasn’t determined until after the fact when I posted my photos to Instagram. We ate lunch together without knowing it. So random.

Ha, that’s awesome. Great minds and all that. Glad you liked it! We really enjoy the Mulan Spicy Fish. They use filet of sole in that dish (I believe most of the other fish dishes are tilapia, which I don’t like). It has a nice Chinese 5-spice background and quite a bit of heat. I’ll have to get the salted crispy chicken.