Wallethub does these rankings that weight various quantitative criteria, including cost. Blends ingredients and dining out. 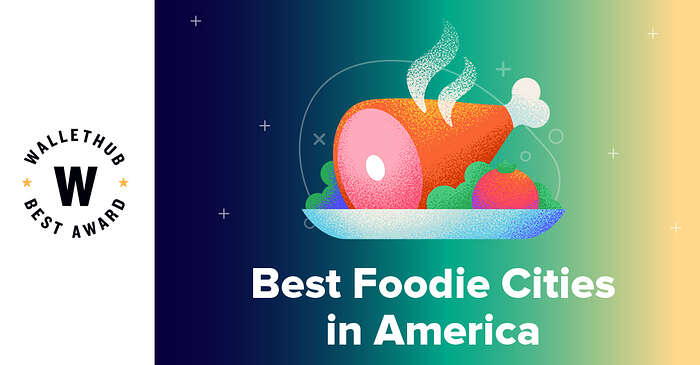 They do a lot of these type of rankings…

This list is a joke. If they are supposedly weighting the two columns of affordability and diversity/quality, how is San Francisco the overall #4 on the list when it is #176 (out of 182) on affordability?

And there is no universe in which New Orleans ranks below Ft. Lauderdale (or the many other incredibly boring food cities I see on the list above it).

I get it. I really get it, but I feel that they are trying to be too “balanced”. They don’t want to list a bunch of California cities as top 10 (for example, San Francisco, Los Angeles, San Jose Oakland, San Diego, Irvine… to name a few will run circles around many of these other cities). I do think Los Angeles can sometime be slightly overrated and that I think San Diego can be underrated, but for this list having San Diego much higher than Los Angeles. I am surprised.

I get New York, New York, but what about Flushing/Queen and Brookyln. Again, I think they just feel bad to list a bunch of California cities and New York cities which will beat most cities on this list.

I think they just want to appear more “fair”

having San Diego much higher than Los Angeles

In no universe does San Diego rate close to LA, never mind above

I think San Diego can be underrated

I’d be very curious what makes you think that, as I’ll be heading back there soon.

.
Orlando, Sacramento, and Tampa in the top 10… very odd list.

Well, in this universe: 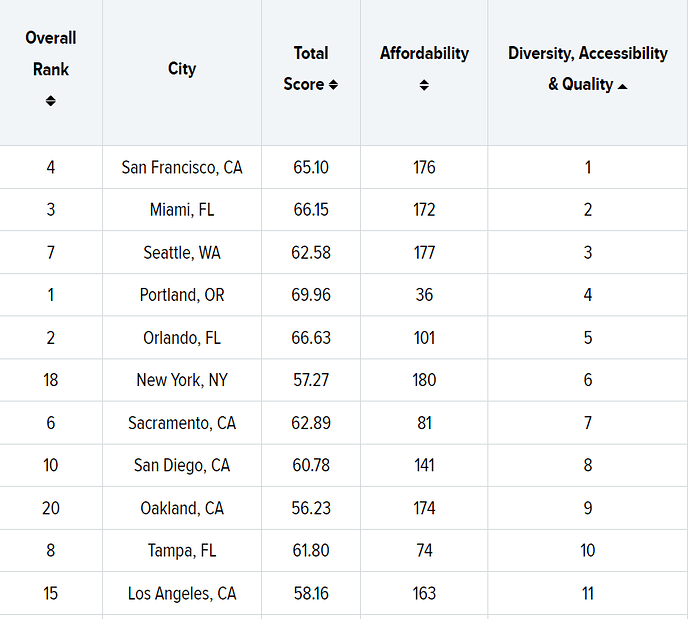 LA ranks lower than Sacramento, San Diego and Oakland
I love the talks about universe.

I’m chuckling at the article and discussion here - nice!

Biggest “snub” by _____Hub here and shows it’s BS to me is NOLA (#41). Elegant delicacies ans beverages at great prices, and music, and history and scene that resonates with me anyways. I’m glad that this board was able to add that link here, iko iko to that.

Queens and Brooklyn are included in NY, NY. At least in my understanding.

Thanks for your clarification

The Methodology section explains, sort of, how you get unexpected results. One key thing – this is city limits only, not suburbs/metro area.

The affordability criteria is weighted by 30%, while the diversity, accessibility and quality is weighted by 70%. Hence, SF is still able to do well.

Actual measures of quality are pretty small part of the total — 5% on restaurant quality and some indicators on restaurant type and food quality. The rest are just quantified metrics of the number of stores of a certain types, restaurant ratios, etc. Affordability doesn’t seem to be weighted against average income (or perhaps it is).

Thus a city like Orlando with a lot of restaurants to service tourist traffic can do pretty well. I’m surprised Las Vegas isn’t even higher as well (in terms of volume of places).

I feel like there’s such a thing as “too fair”, you can tweak statistics to a great degree, and with food, it’s even more subjective.

I have lived in San Francisco, Los Angeles, Portland, and (currently) Sacramento.

To put Sac on anywhere near the same footing as SF and LA is laughable. It isn’t even at Portland’s level, and Portland, while it certainly has a myriad of charms, can’t really compete with SF and LA, especially if you consider “The Bay Area” and “the LA Metro Area” as opposed to operating strictly within city limits.

Sac is cute. It has a couple of really nice places. There’s decent Vietnamese to be had thanks to a big influx of immigrants in the south part of the city (now dubbed “little Saigon” ).

We can now get soup dumplings at two, maybe three places. We have some decent ramen (along with a few ‘good enough’ chains). There’s decent Cantonese dim sum. Less for Sichuan-style dishes (Only one decent dan dan mien to be had.) 99.9% of Chinese places are strictly American-Chinese sweet and sour, General chicken, etc.

There’s excellent steaks, burgers, and western style seafood to be had, but nothing to rival the high end sushi you can get (at a price $$$$) in SF or LA

Sac has, weirdly, about a zillion Nashville hot chicken places. No one seems to know why.

I saw that there’s a World Famous Hotboys restaurant in Sacto at 1115 21st Street. I’ve just been to the one in Oakland but to my taste that’s among the best out here in CA and worth a shot if that’s a dish you like. So many crappy hot chicken places out here now, replacing crappy ramen and then crappy poke I guess.

Nash and Proper is an actual Sacto-local hot chicken place, and they’re very well thought of.

Personally, while I love me a good chicken sammich, I don’t care to drown out all other flavors with a half a cup of hot sauce. So it’s never been a fight worth getting in. Now, there’s some very good fried chicken to be found here. The late, much lamented ‘South’ had that title sewn up before they closed. Now it’s open season…

I always found their chicken in their Sammich to be too thick, throws off the bread to meat ratio.

There use to be a killer “broasted” chicken place, fried chicken, somewhere off the 5 on the way up to Shasta…I can’t seem to locate that anymore (maybe it’s gone), but it was a must stop along with the Olive Pit for us.

I like the sandwich at hotboys cuz it uses dark meat which nobody else seems to do. It’s also not really saucy but it sure is hot if that’s what you like (or don’t).

Bartel’s was our standard stop in Redding and Corning.
I don’t remember fried chicken unless it was Klub Klondike at Lakehead.

Cool - never been to Bartel’s looks like a spot to check out. Not KK. It was some kind of gas station/convenience store set up that just made this great chicken. I’ve seen that broasted chicken back east…i don’t see it much anymore out here. Juicy stuff.

I tend to agree, though the chicken itself is quite good.

IMHO the best chicken sandwich in Sacramento probably goes to Pangaea Bier Cafe. They do a spicy mayo that’s not bad, but you can get it on the side so you can apply to your taste. They do an excellent burger as well. And they’re across the street from Gunther’s, arguably the best local ice cream place (the toasted almond is top notch).

But you still can’t get anywhere near the bigger west coast cities for diversity of cuisines and availability up and down the price point ladder. The high end here is non-existent compared to S.F., L.A. Portland, and the like, and I don’t even LIKE the super fancy white tablecloth stuff.