I tried a few dishes from Volta in SoMa the week they opened in December in a couple dinners. Volta is a new Scandinavian/French restaurant from chef Staffan Terje and the team that runs Perbacco and Barbacco. Perbacco is one of my favorite restaurants so I was keen to give it a try. I went in their first week open so take these impressions with a grain of salt.

Raw radishes with herb butter, which is apparently a typical French appetizer. Ask for some bread to spread the leftover butter on.

Matjes herring with brown butter, potatoes, trout roe, and some greens ($15). I liked this. Quite sweet, almost like herring candy. The brown butter added a rich caramel-y and nutty flavor.

Skagen ($18) - Like an deconstructed open faced shrimp sandwich. Small shrimp around chunks of toasted brioche bread with a dill horseradish sauce and whitefish roe. Didn’t really come together unfortunately. The shrimp were a little chewy and the brioche had a bit of an odd stale texture.

Köttbullar ($24) - Swedish meatballs with mashed potatoes in a nice rich gravy, pickled cucumbers, lingonberry jam. Lingonberry jam had a few whole lingonberries. This was good if a little expensive, though my price expectations may be unfairly affected by Ikea. Mashed potatoes were very buttery. I went last week. They are still working out some FOH kinks like putting the wrong order in, bringing out new dishes without clearing the table of the previous courses. The food we had was good if at a slightly higher price point than I would expect for those dishes. The decor and atmosphere is geared more to tourist and business accounts and they sorely need some sound proofing.

The standout was the gnocchi “parisienne”, which traditionally is made with choux pastry served with Béchamel sauce, this one had a lighter sauce and a beurre de sapin and it was extremely addictive especially with the plentiful wild mushrooms in it. The portion was quite generous and would be good as a shared pasta course.

All of the dishes were excellent in terms of taste, the escargot was served on potatoes and had the earthiness that good escargot has, the veal sweetbreads weren’t overcooked and the truffle jus complimented the richness rather than overpower it, but both were a smaller portion than expected for the price. We got the skagen mainly because I ate so much of it the last time I was Sweden and for nostalgia. It’s probably the most expensive skagen I’ve ever had especially considering in many fine dining place there it’s served as a gratis amuse at the beginning of meal or family style dinner. It was fine but not something I would order again.

The service hiccups-dishes were brought out before they cleared the course before, servers reaching over us to clear plates and water glasses left empty. Our server got our order wrong for our entrees but they immediately fired a new dish for me and a new one for the spouse. They also took off the cost of dessert not that we asked for anything because of the mix up. Our server was very knowledgeable about the menu and we had non-alcoholic cocktails throughout the night.

Realized I put the skagen picture twice. Here’s a picture of the matjes herring: 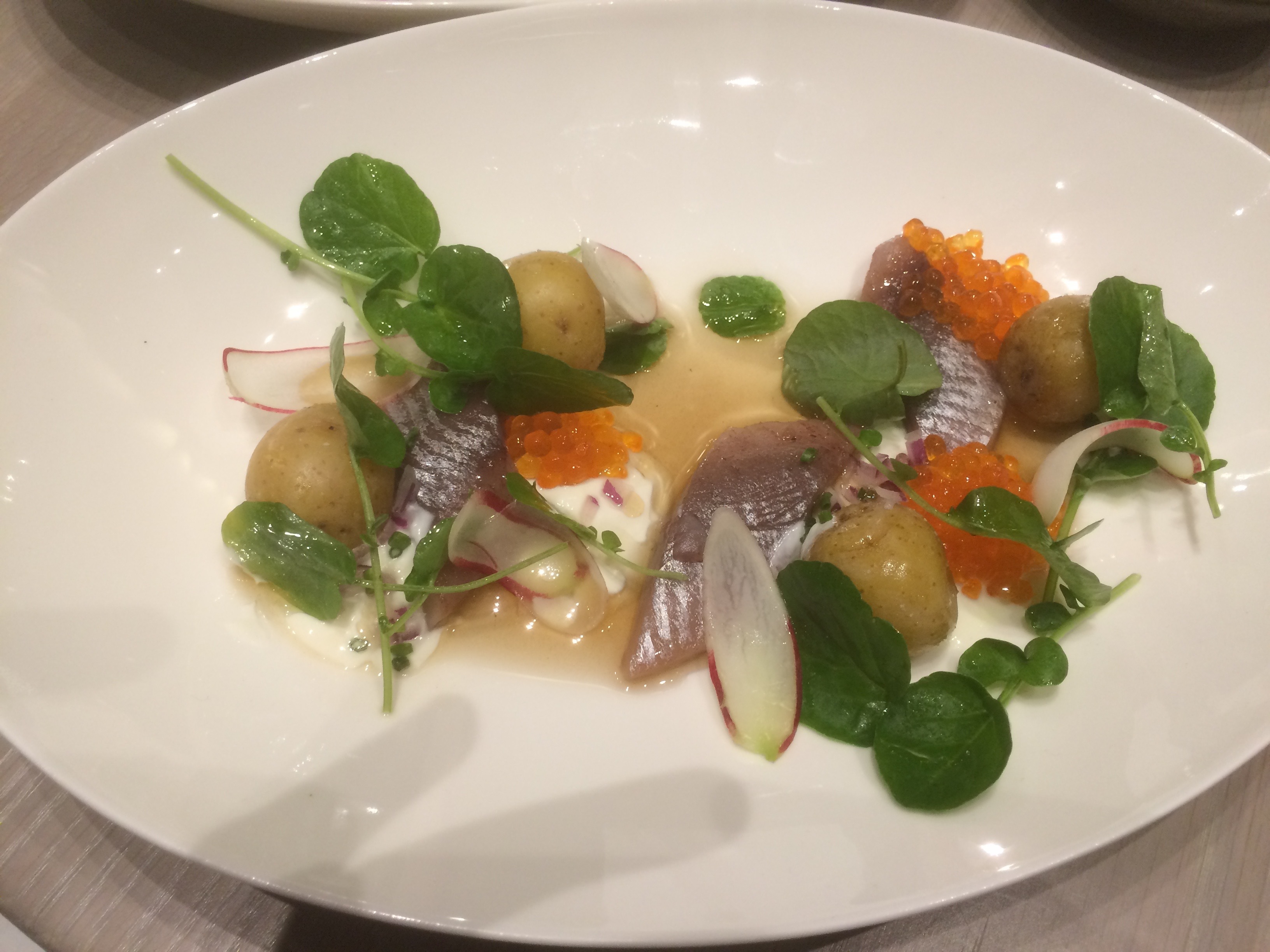 I just told my sister-in-law to make brunch reservations for Sunday.