I was looking for some old photos and came across these. Such a wonderful memory of Vietnam. This was in Chau Doc, in the deep south of VN, December 2004. The day we left Chau Doc we ate breakfast at the long distance bus station, almost right next our bus. 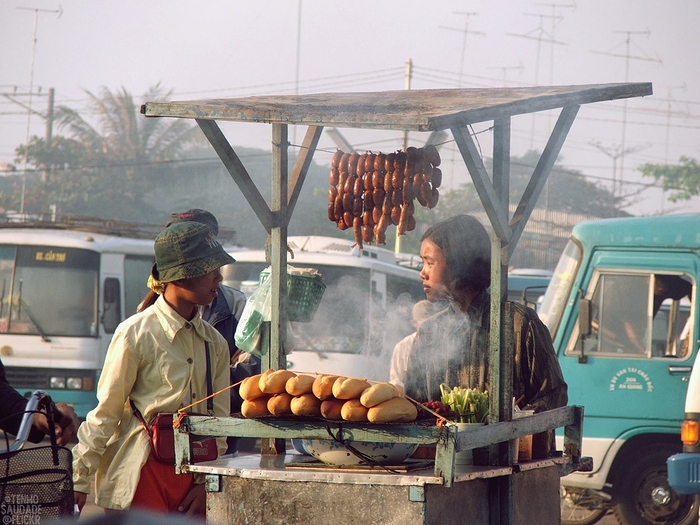 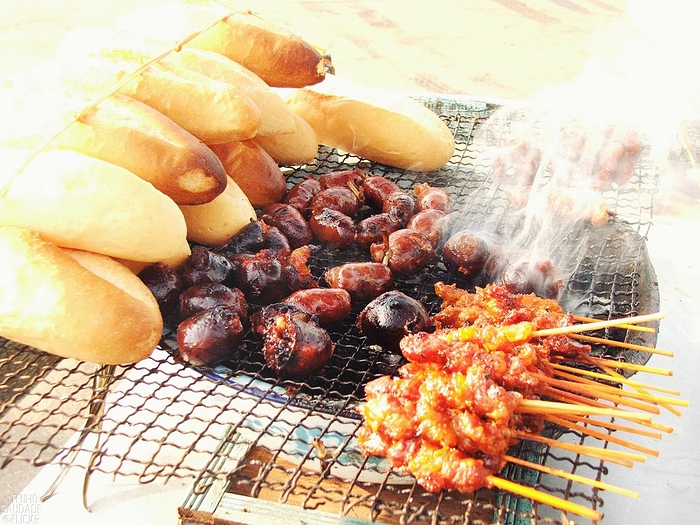 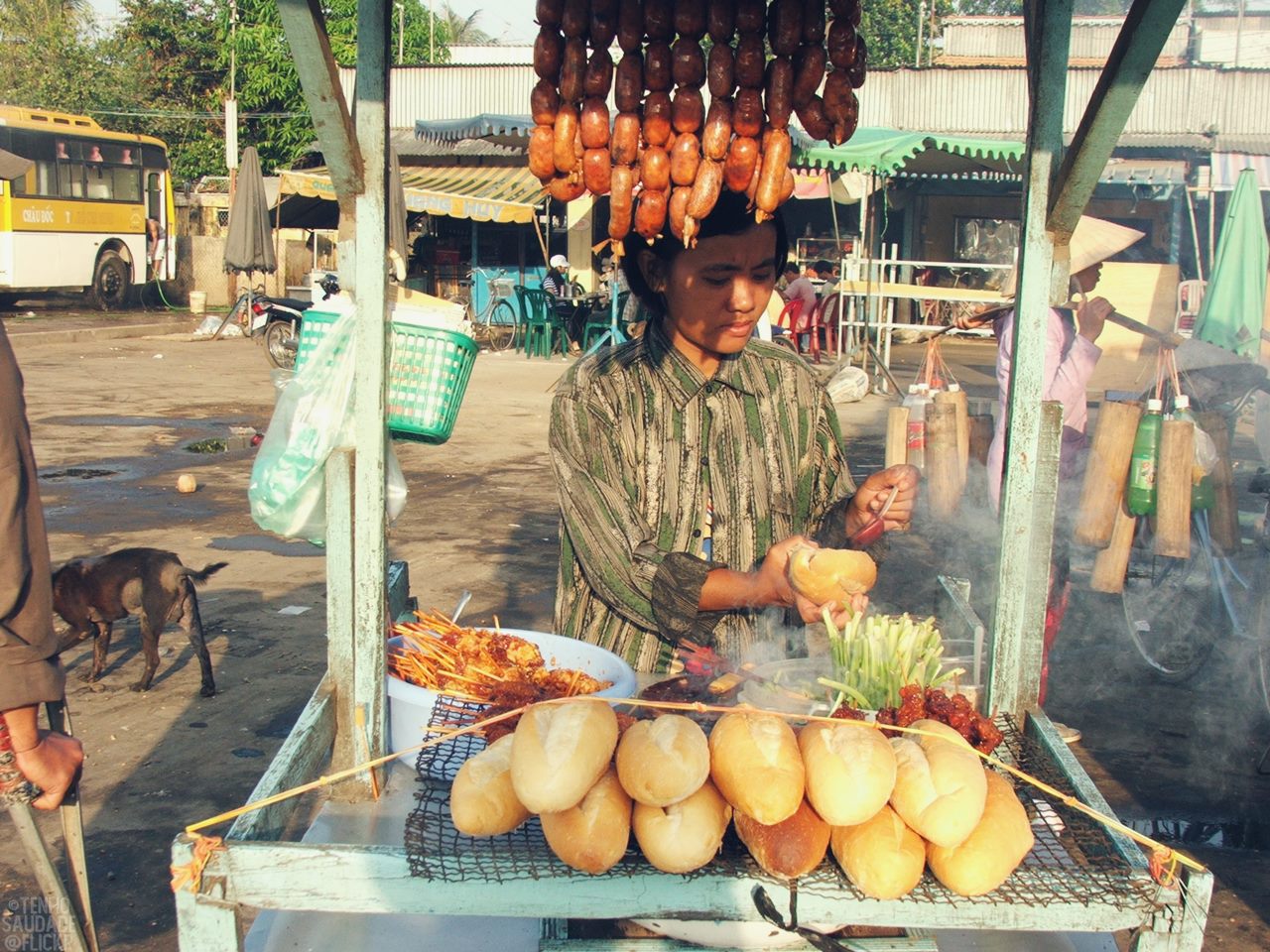 Our bus to Rach Gia, with Banh Mi rig next to it. 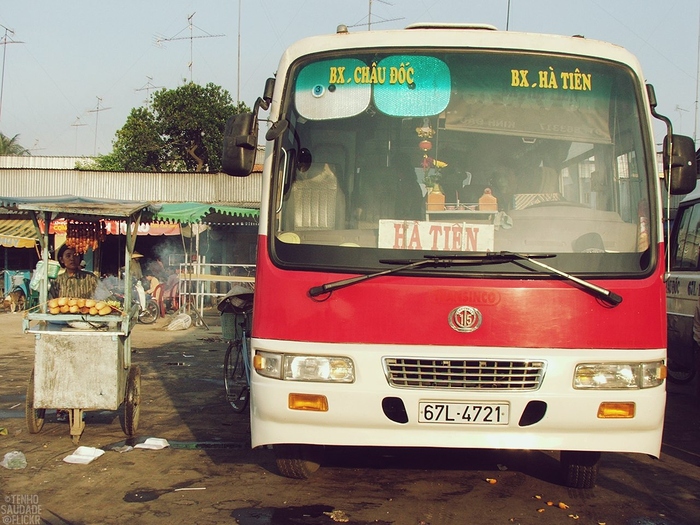 Behind the bus where we ate noodle soup. Low plastic chairs were funny to sit on for the partner being almost 2m tall. 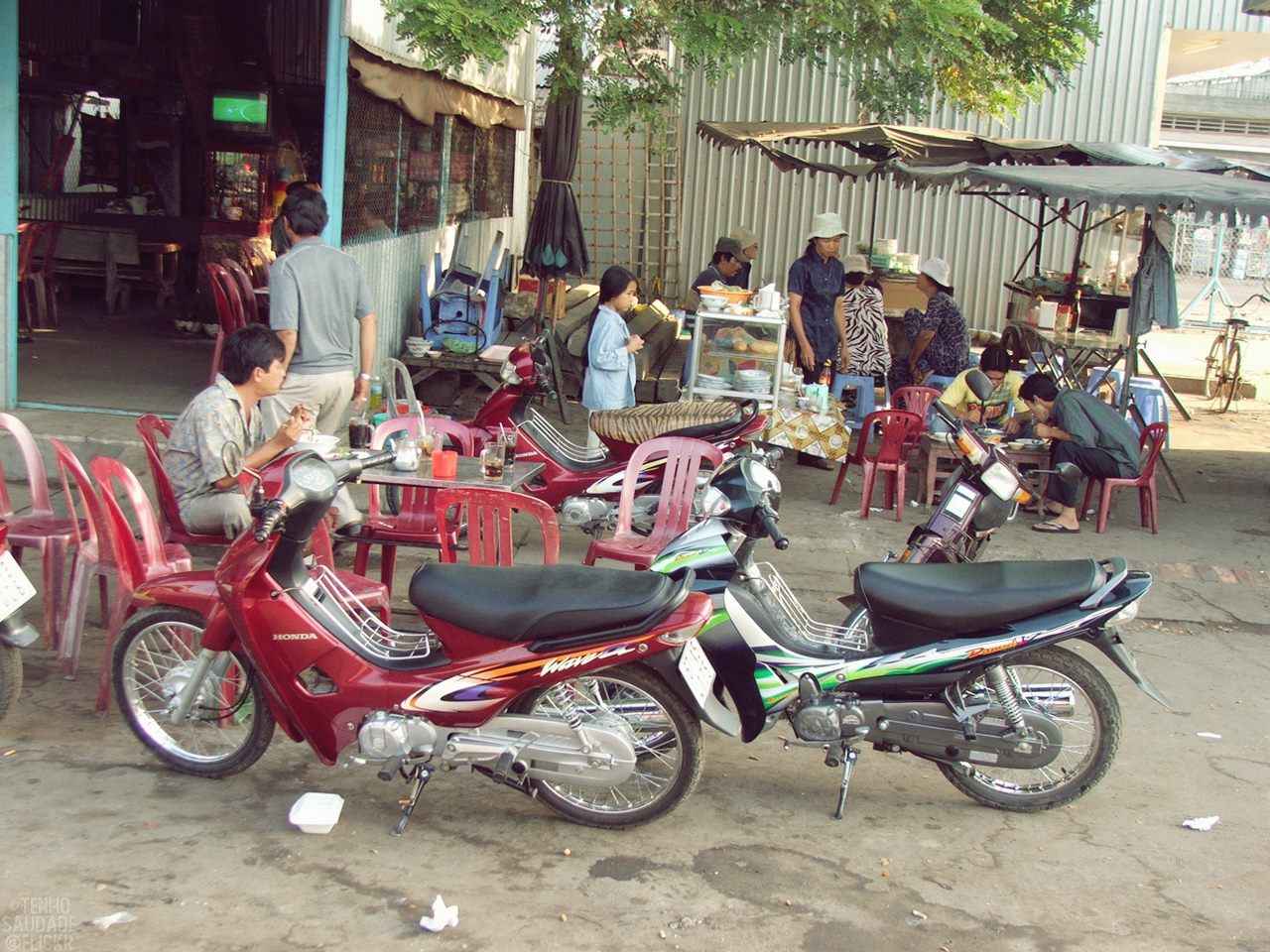 Savoury food before 7am. 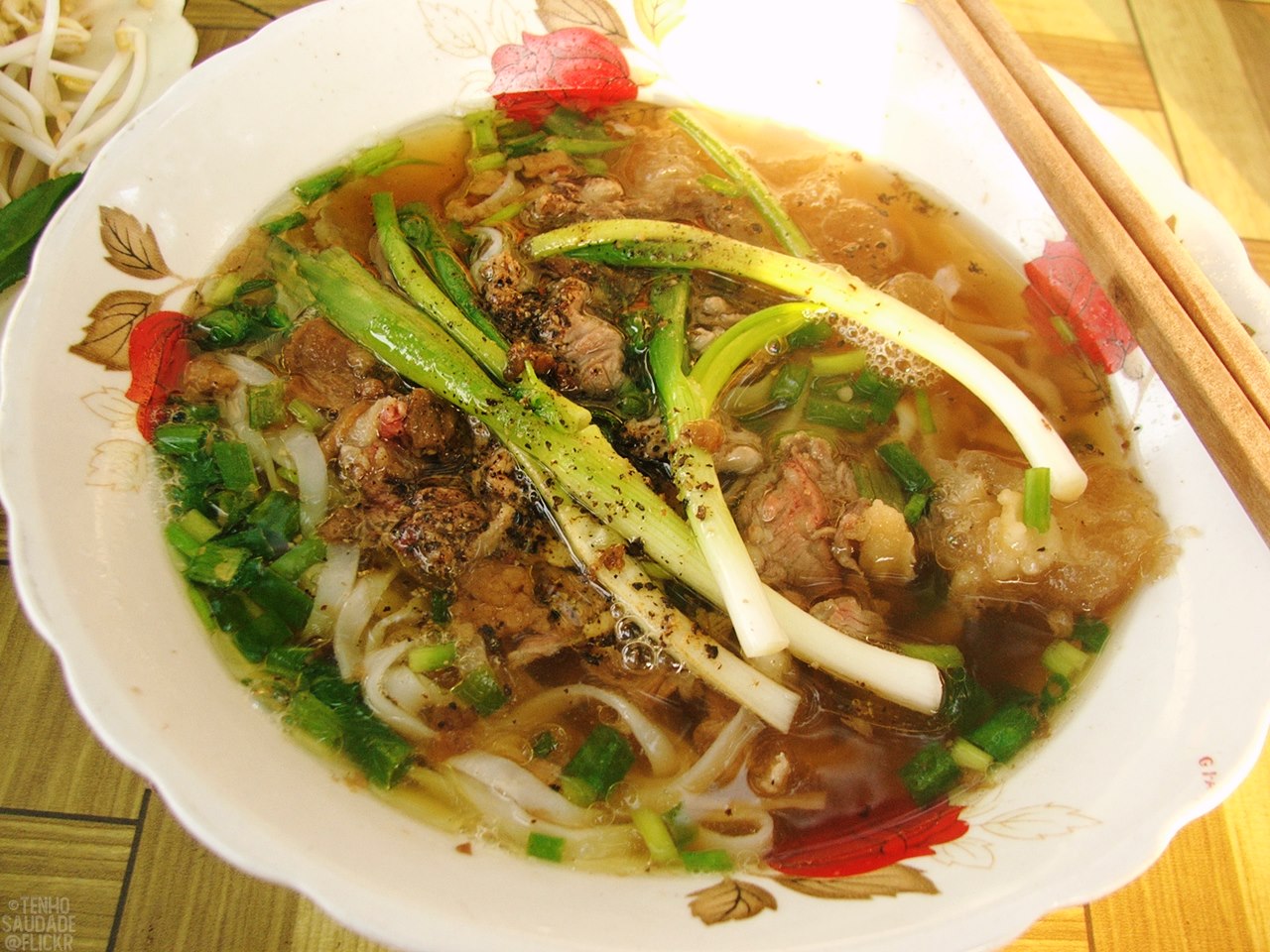 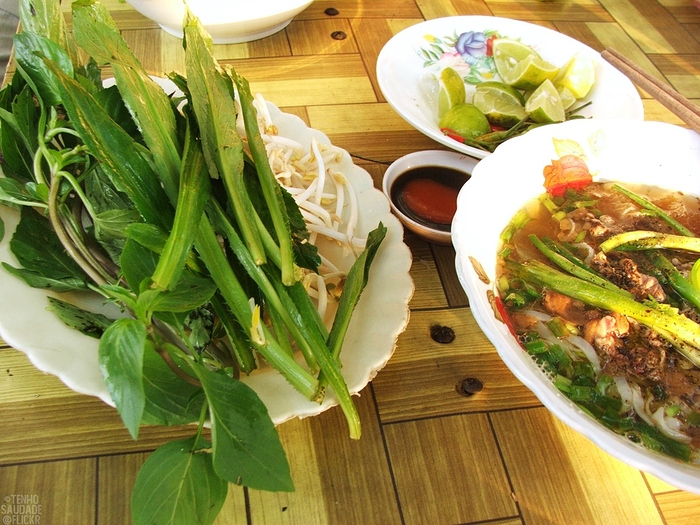 Once in a while the partner asks when we go back to VN and I always say when we simply get a stamp in the passport on arrival, like many other countries. Unfortunately, some countries only have one thing we are interested in and in the case of VN it’s the food. Visa hassles and dual pricing are 2 of the top annoying reasons to stay away from any country.

Low plastic chairs were funny to sit on for the partner being almost 2m tall.

On our first evening in Hue last March, the second eatery we visited had precisely these tiny plastic chairs which we eyed rather cautiously. There were 6 of us from Singapore, and all of us were rather hesitant about sitting on them, pretty doubtful that they’ll hold our weight.

One of my friends decided to take a chance and sat down on one. There was this loud CRACK as the entire chair just broke apart, splaying its legs in 4 different directions!! The rest of us were aghast! The shocked Vietnamese diners from the other tables all stared in our direction as my friend half-rolled, half clambered to quickly pick himself up.

The owner of the eatery then suggested that each of us stack 2 chairs together for added strength. I stacked 3 for myself - I’m 187cm and 118 kg/255 pounds - not taking any chances!

I’ve never been, but my adult daughter and I were just talking about her very memorable trip with Habitat for Humanity.

They are made for Vietnamese size and weight. Remember to stack the chairs next time

Here’s street level dining. Someone said to me “that’s not street level, that’s gutter level” whilst giving me a disapproving look. But then this person does not travel to “third-world countries”. 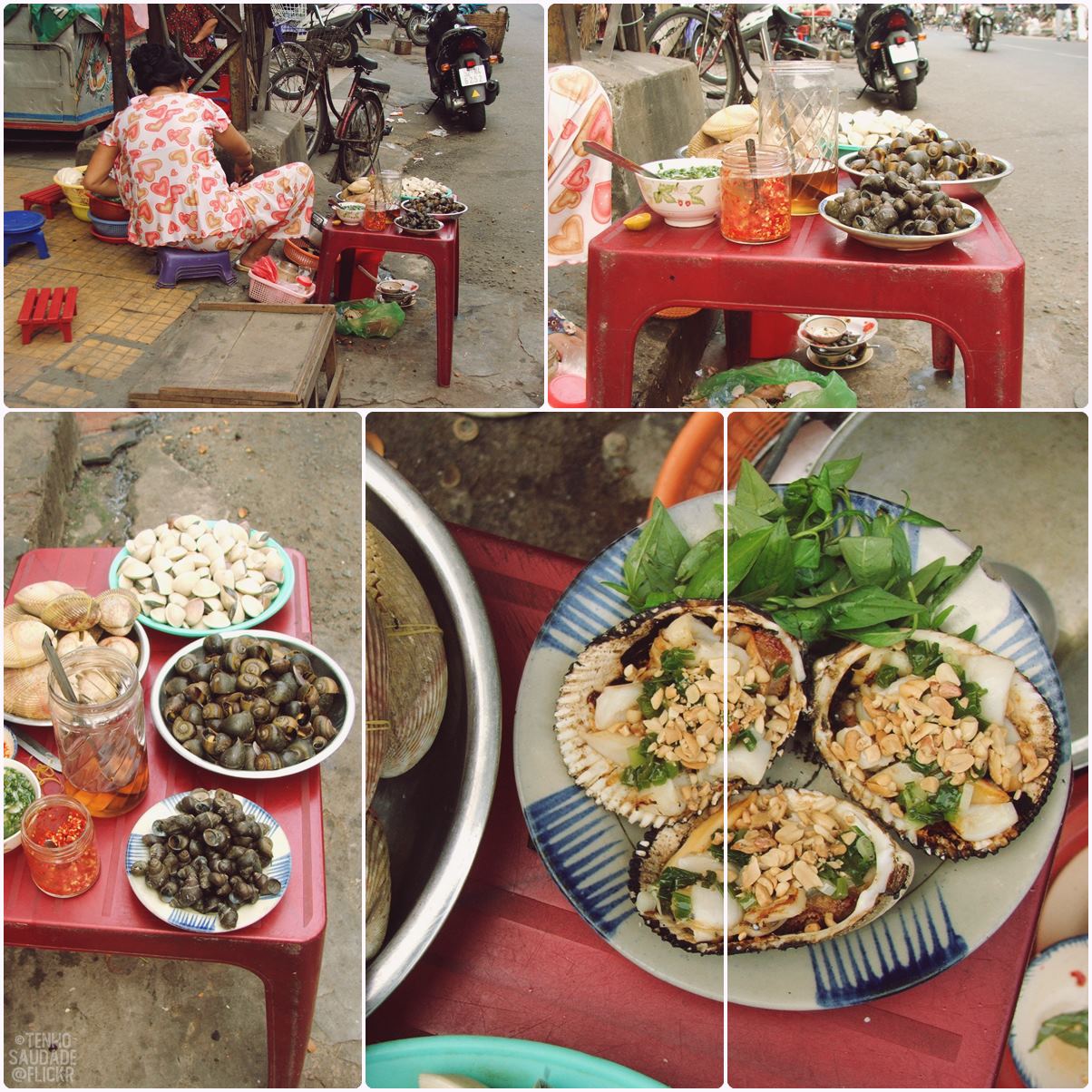 PS: hey, can you use your mod power and change the thread title to “[Vietnam] Memories of Vietnam”? Also include a tag. I may add more VN photos to the thread in the future. Maybe you and others add yours and theirs, too. Thanks.

They are made for Vietnamese size and weight. Remember to stack the chairs next time

Yup, definitely! But some of their young are now quite tall as nutrition improves, although the Vietnamese are pretty small in size, on average, compared to Singaporeans or Malaysians. We felt like clumsy, lumbering hippos next to them. Here I was posing for a pic with an elderly potter there. 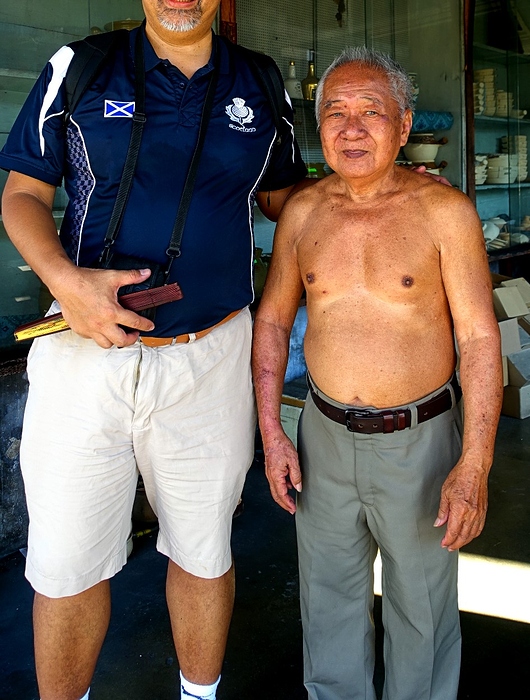 I’ve renamed the thread as per your request.

Good comparison photo. I have no problem at all but the partner, who is 195cm/71kg, faces many vertical challenges in our travels.

Chicken looks like he wants to cross the road. Why?!?!? 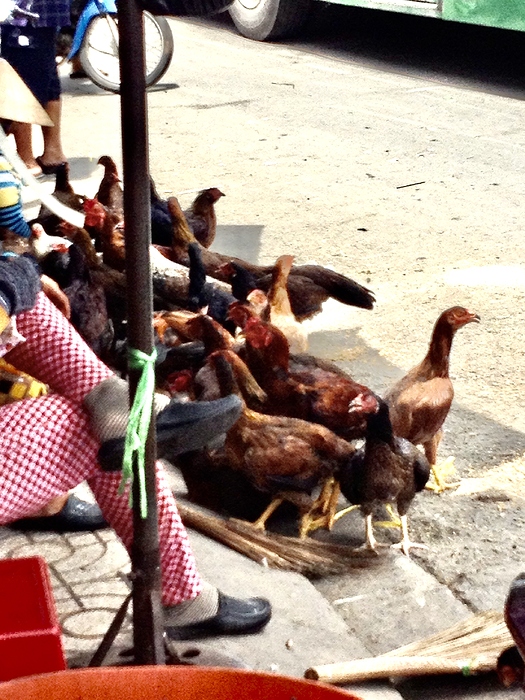 They are waiting for the bus and motorbikes to pass.

Good luck on that!

We even ordered some drinks and sat out front just to watch the traffic in HCMC’s city centre. Messerising. Always try to cross the street with locals. A hair-raising experience. The motorbikes are like a school of fish. They move with great agility and efficiency around you as you cross.

I instantly thought of the old video game Frogger upon experiencing HCM traffic for the first time. (man, I’m old)

After my first few harrowing crossings, I learned that one must walk in a steady controlled pace. keep track of traffic with side-eye, don’t look directly at the oncoming traffic. If the driver can see your eyes, he expect you to get out of his way. If you don’t look at him, then he has to to avert. 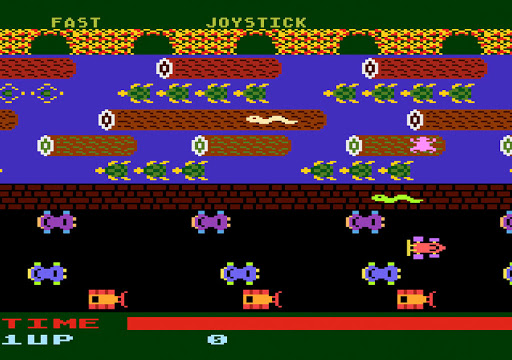 I instantly thought of the old video game Frogger

Which of course, makes me think of the Seinfeld episode!

Same. I learnt of it on Seinfeld.

It’s fun going through these old photos. Wonderful memories of happier times. I decided to start in chronological order of the trip, like all my trips.

First meal in VN was late having arrived late from Phnom Penh. I don’t know how in some countries it’s totally fine to depart 5 hours later and then the speed boat driver thought it was super safe to fly the boat over the surface to get to the destination in record time not having a thought for the passengers’ safety. We were just glad we made it to VN in one piece.

As it was already near bed time everyone on the boat went to a hotel nearby just for the night. Some other tourists would catch a bus first thing in the morning to Cantho for the floating market, or directly to the big city, HCMC. I’m so glad we stayed in Chau Doc for 2 more nights. Check out the collages of scenes of rural VN and you’ll know why.

Only had time to eat something simple before going to bed. This is the first thing we ate after entering VN. 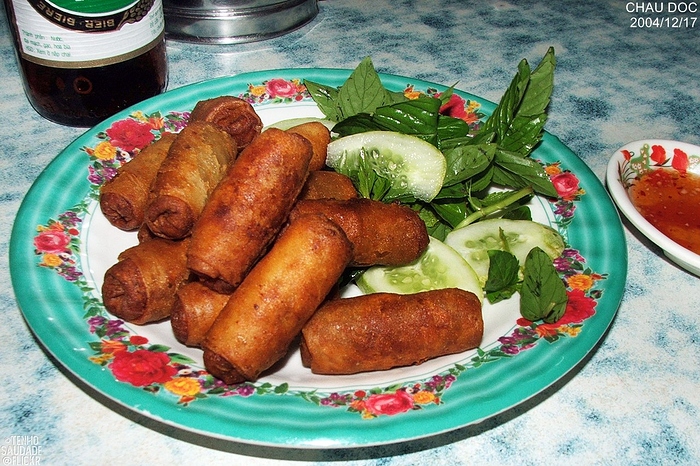 The next morning we moved to another hotel. When we went outside looking for breakfast it began to dawn on us it was a good idea to hang around here for a couple of days.

In Asia it’s normal to order from different stalls and eat at one of those stalls. We had vegetarian Banh Mi and some noodle soup. 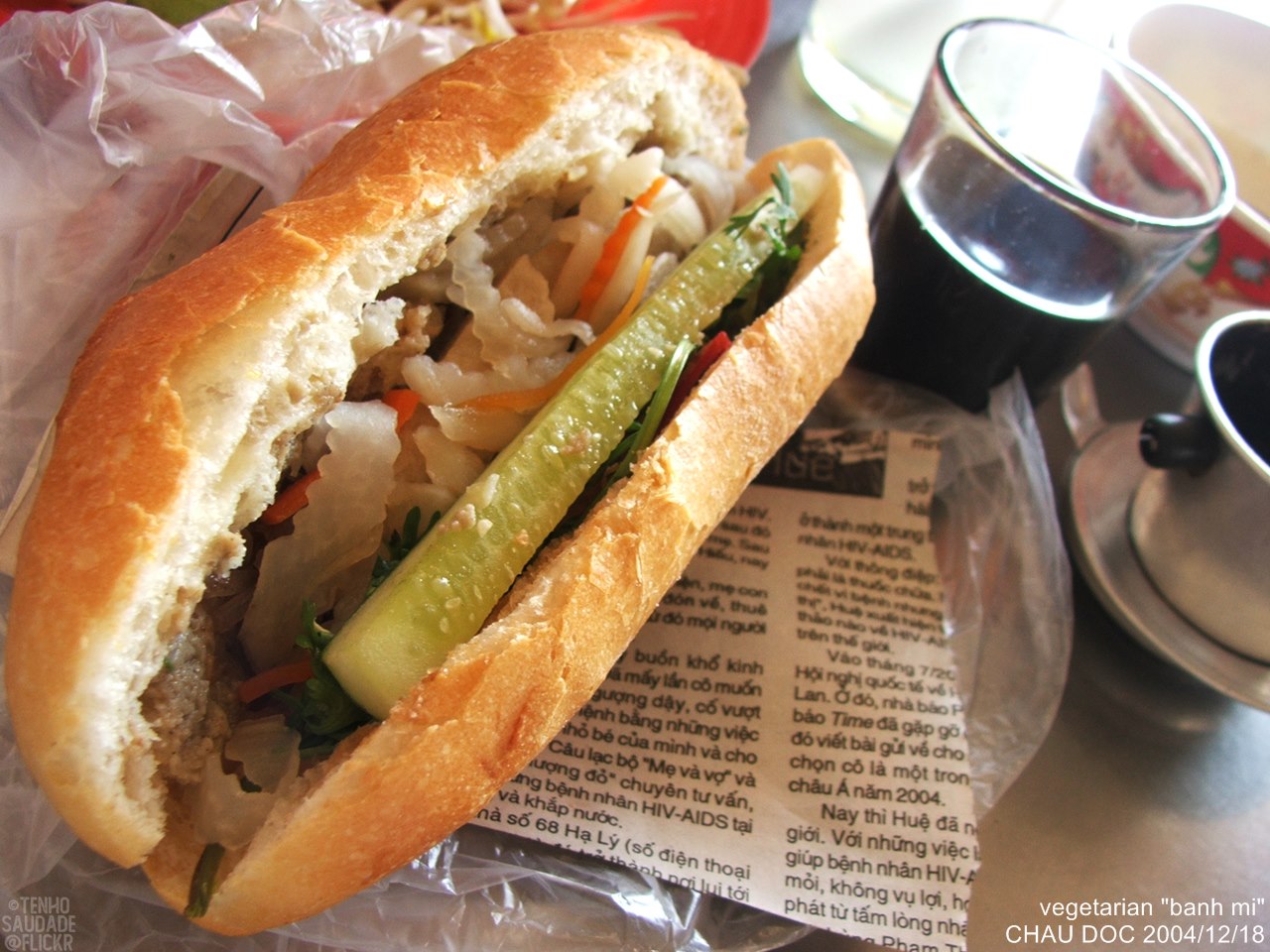 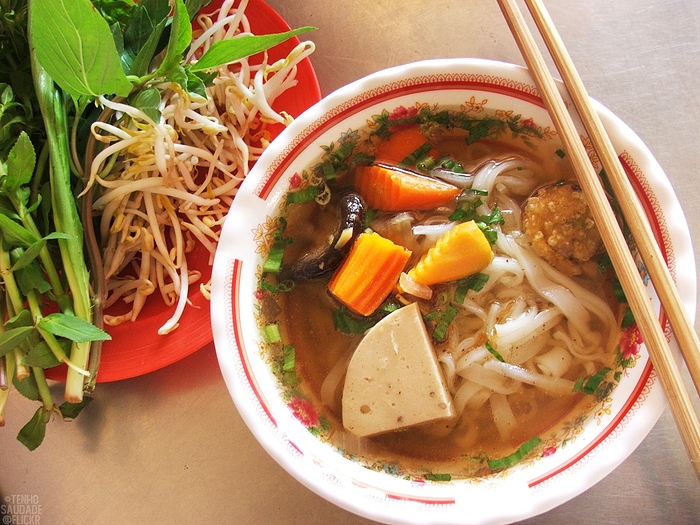 And drip coffee, of course. Always black. Even if they put condensed milk in it we never stirred. Also, it takes some time to finish dripping so we ordered multiple cups at the same time. They couldn’t wrap their heads around it. Crazy tourists. 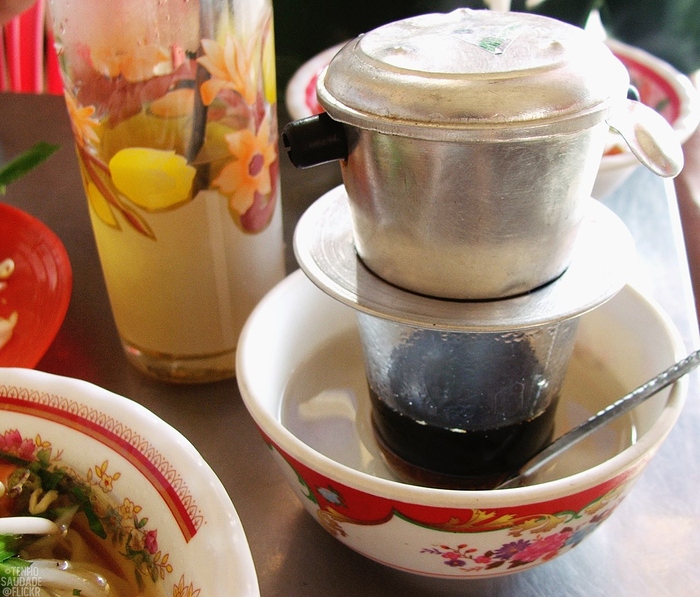 After breakfast we hired 2 scooter drivers to take us to the countryside. I no longer remember the village but Cambodia is only a stone’s throw away. Chau Doc itself is already close to Cambodian border and has an ethnic Cambodian population. It was stupid back in 2004 not being able to cross over to VN from Kep in Cambodia, where I was previously. There was no transport possibility from Kep even to Ha Tien which is on the other side of the border. So we had to go back to Phnom Penh and took a boat to Chau Doc, and from there we could catch a local bus to Rach Gia where a real boat would take us to Phu Quoc island, our destination.

Collages of rural VN: almost like in some VN war films, but without the military. However, why so many flags everywhere? Too fascist for my taste.

After the excursion we ate lunch but for some reason I couldn’t find photos of other dishes on the table. Only one of the southern iconic sour soup with fish, tomatoes, some kind of spongy veg (no, not okra). 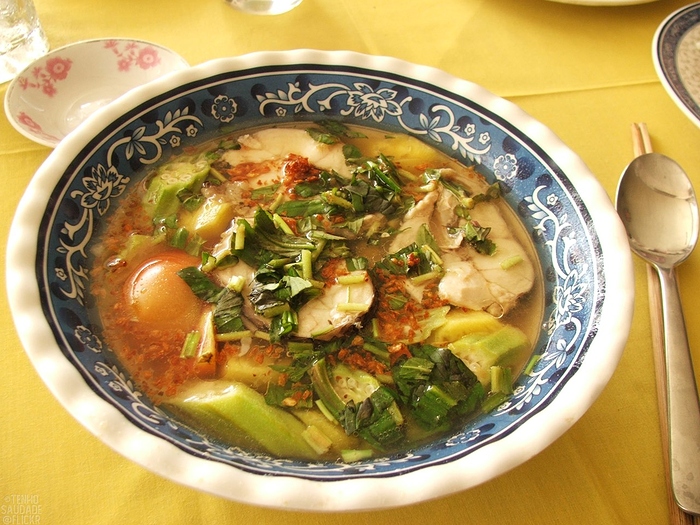 Sugar cane juice with crushed ice. In Taiwan they freeze the juice in ice cube trays. Not in VN. And there are just impossibly too many cubes. 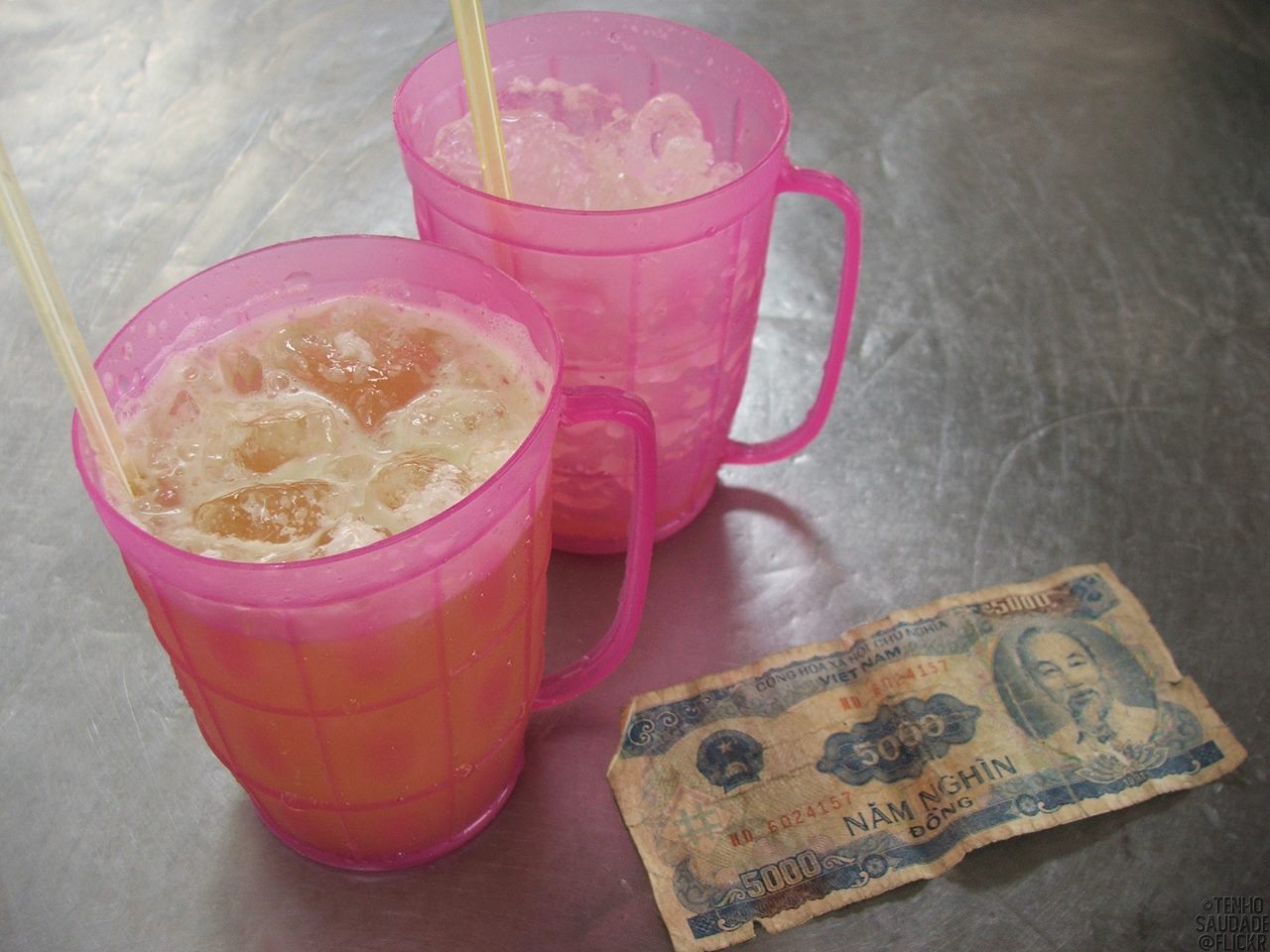 The stall and the owner-cook 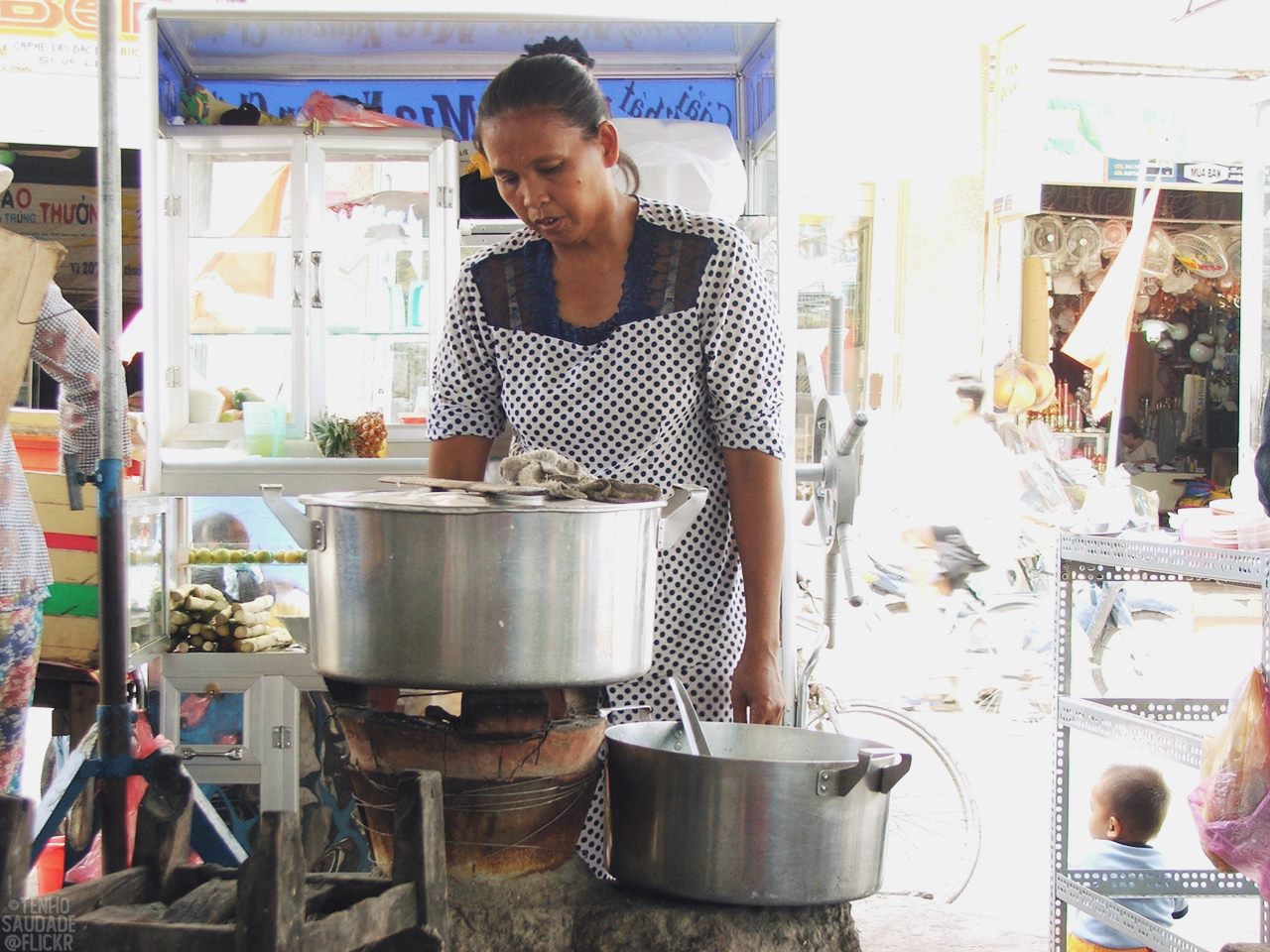 After lunch we walked down the river and to our surprise there was a woman who was eager to give us a card. We read it (all in English) and negotiated the price. Pretty sure we got ripped off but the boat trip was a fantastic experience and we quickly forgot we had probably paid at least twice the real cost. The boat driver, the same woman, was nice and her young son also went along with us. We didn’t see other tourists or pesky backpackers which was rather nice.

The boat driver also took us to an ethnic Cambodian village. At least I thought they were Cambodian. Then I saw the writing on the chalkboard. Isn’t it more Arabic? 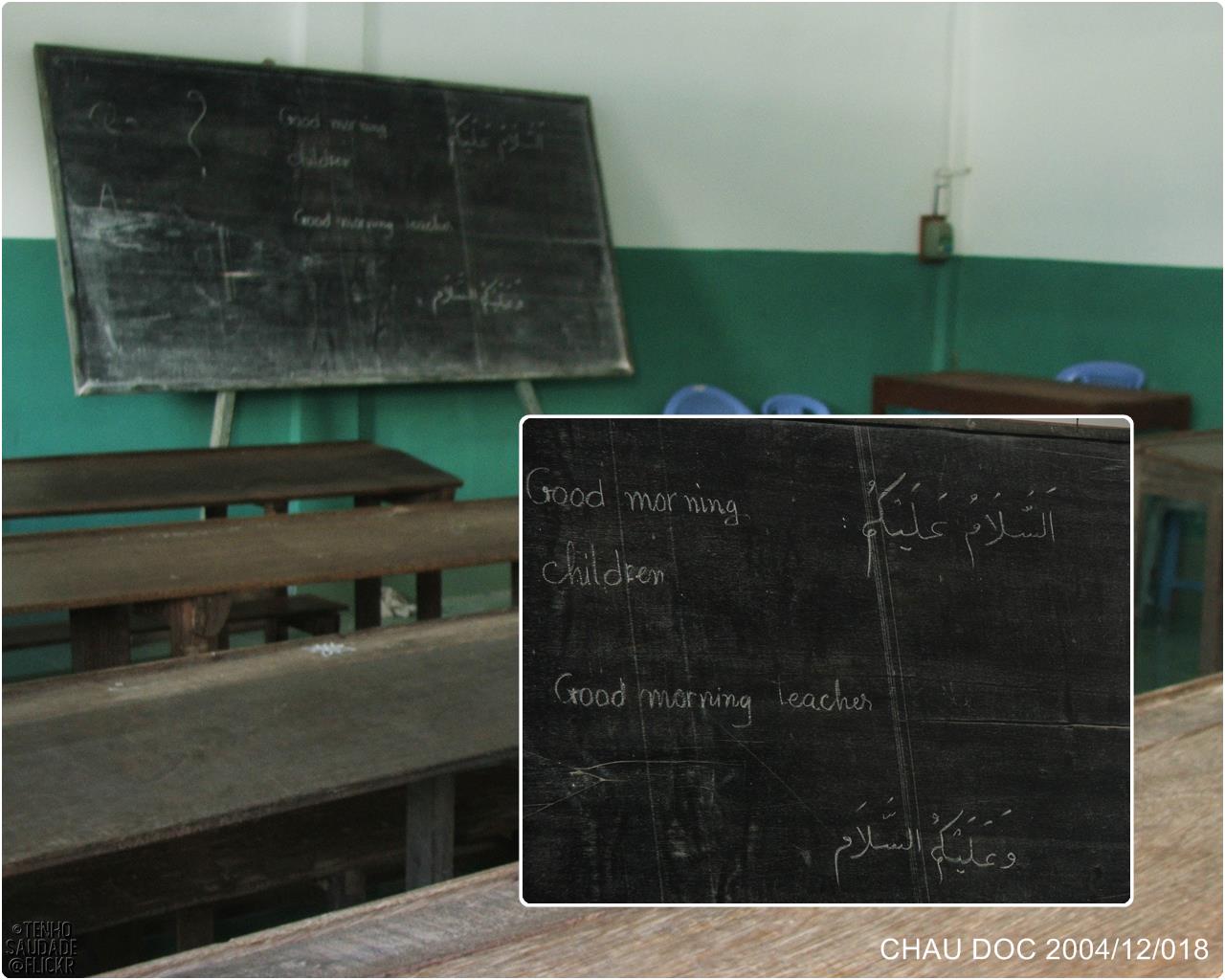 After a long day sight-seeing finally it’s time for dinner. Tiger beer was already prevalent in VN then. 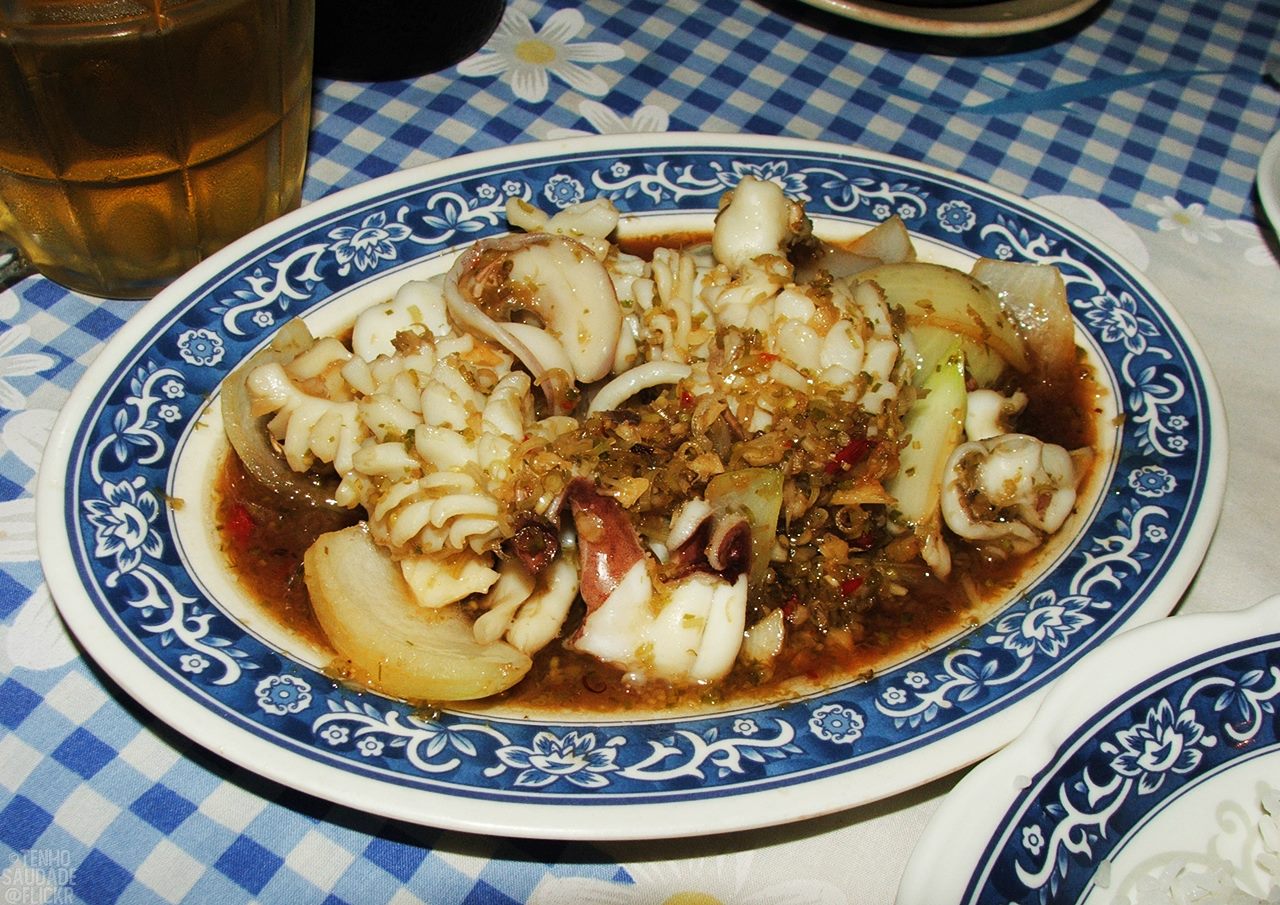 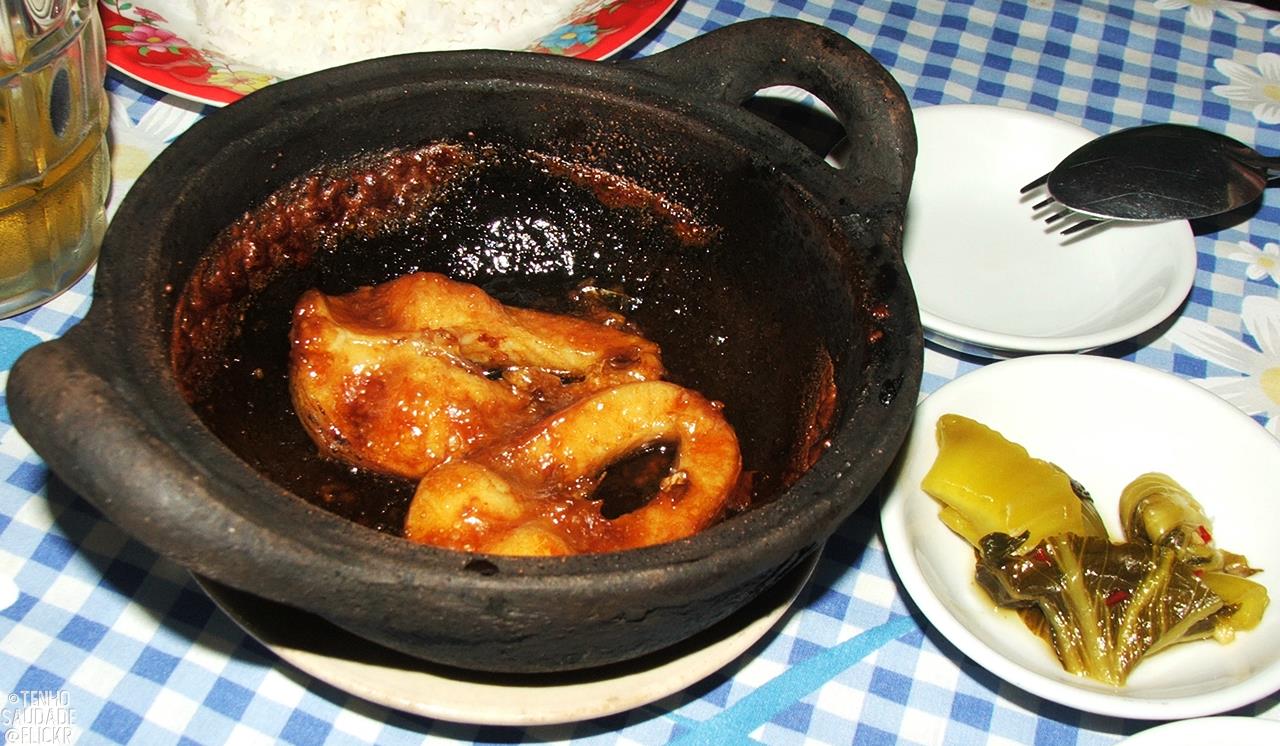 The Arabic says “AsSalam alykum” Peace be upon you. And at the bottom it’s the reverse: “Alykum asSalam.”

Thanks! So it’s indeed Arabic.

The boat driver also took us to an ethnic Cambodian village. At least I thought they were Cambodian. Then I saw the writing on the chalkboard. Isn’t it more Arabic?

It’s a Cambodian Muslim village - I know of Muslim missionaries who go there to propagate their faith, and teaching the locals Arabic.

I could never get over how early the Vietnamese started their day.

When I was in Ho Chi Minh City on a business trip back in 2004, I always got up very early in the morning, put on my jogging shoes, and ran around the vicinity of my hotel (I was staying at the Sheraton Saigon downtown).

This was how the streets looked like at 6am in the morning! 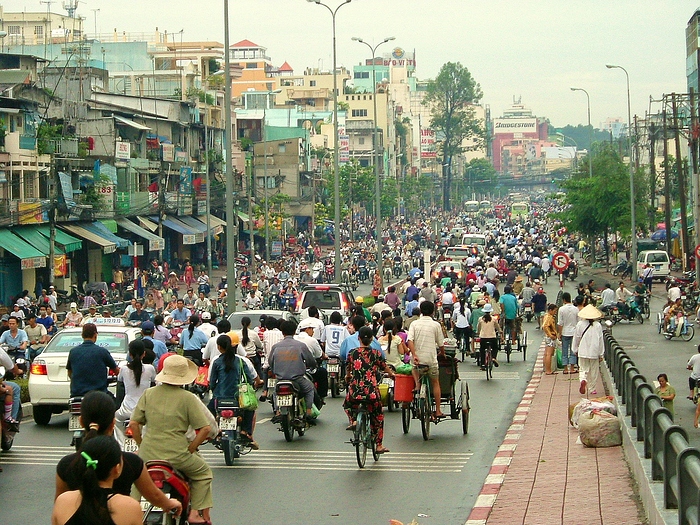 Thanks for this info. It’s very primitive in the village. The old couple let me make some photos of them (see one of the collages).

HCMC is always crowded but it’s already like that at 6am. O.M.G.! Phu Quoc was our favourite place on this trip. Had the beach to ourselves every day there.

One morning, I came across Pho 2000, and remembered my Vietnamese colleagues telling me that Bill Clinton ate there. Bill had his pho meal there back in Nov 2000, so it was just two months before the end of his second term as the President of the United States. 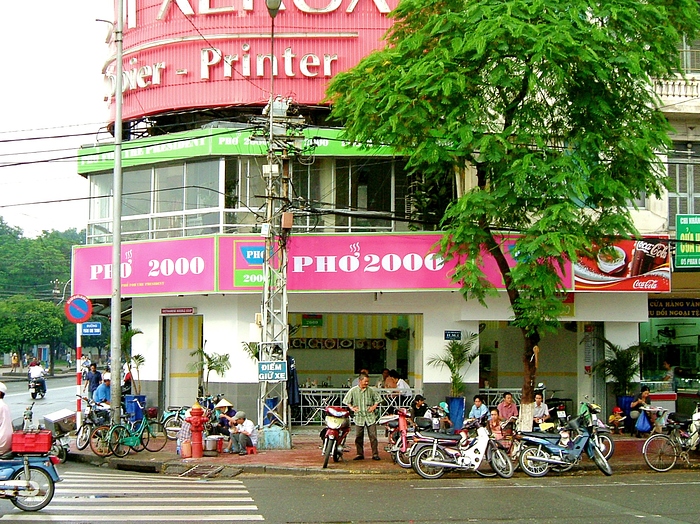 But, I didn’t find the pho there anything out of the ordinary: 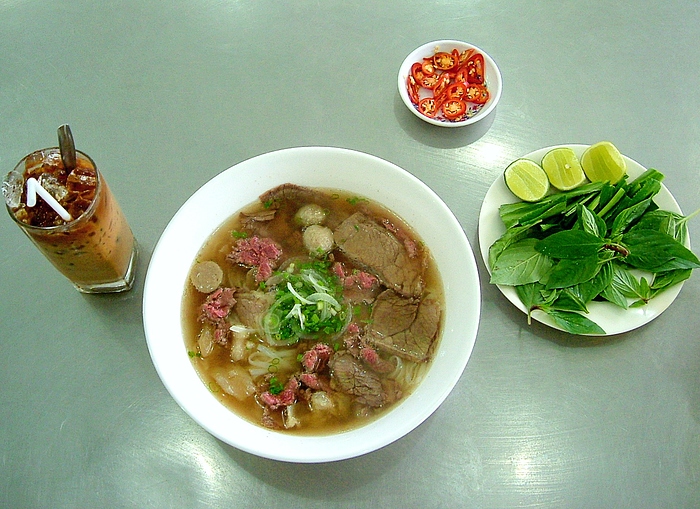 I remembered, some time later, when I was in Delhi, my Indian colleagues took me for dinner at the Bukhara, ITC Maurya, and told me Bill Clinton ate there. I said, “Hey, this is the second place I went to where Bill Clinton ate at!”

You know, @Presunto, sometimes, I do miss the Clinton years: when all that Americans need to worry about was who their president was dallying with inside the Oval Office; and when foreigners think of the American president, they see a slightly pudgy, friendly gourmand who loved exploring new eating places.