We have a community garden at work, which is a large hospital that’s mostly one story. There are lots of patios and an unbelievable variety of birds and other animals live or pass through the grounds. i’ve personally seen a goat (escaped pet, I’m sure), a ring-tailed cat, a bobcat, javelinas, a coatamundi, and there’s a skunk living somewhere near the garden, probably in the basement of one of the old adobe buildings that were built an the 1920s.
Anyway, the garden is a favorite spot of the birds, rabbits, squirrels, and ground squirrels that live on the grounds, and they really wreak havoc on the crops people are trying to grow. Meanwhile, my plot has only sunchokes and herbs. Grasshoppers eat the heck out of the sunchoke leaves, but otherwise no animals or insects bother my plot at all, and one other woman has all herbs that don’t look to be bothered by anything, either. I have winter savory, sage, tarragon, marjoram, and a Mexican oregano.
So I was wondering- what do you grow that isn’t bothered by varmints?

this has to be separated into insect problems and animal problems.

we have raccoons, squirrels, chipmunks, deer, et. al.
the chipmunks/squirrels will strip and entire pea patch bare over night.
a single raccoon will eat every next-day-ripe ear of sweet corn.

the only thing varmints don’t bother in my garden is weeds.

My upstate garden is fenced, so deer can’t get to it and rabbits have a hard time. Tomato and cucumber plants pretty much get left alone, as do radishes and carrots. The pea and bean leaves get munched on, but not the fruit. A mole can take down an entire bean plant from underneath. Slugs are a big problem for the leafy greens, but they’re relatively easy to control with iron phosphate.

I was talking ot a nurse in the garden the other day- she pointed to her plot that’s a raised planter and said “Look what they did to my carrots!” I thought they were chives, all the leaves were gone. I think that squirrels must’ve gotten them, it’s up too high for the rabbits and ground squirrels.

The garden has a five or six foot chain link fence around it, and the grounds crew trenched around the outside and buried chicken wire a couple of feet down that comes up about three feet over ground level, but over the years I guess it’s rusted and the little burrowers have burrowed into it. But I guess at least we don’t have deer in the garden (looking for the bright side)

There are lots of patios and an unbelievable variety of birds and other animals live or pass through the grounds. i’ve personally seen a goat (escaped pet, I’m sure)…

A goat? Lol, that cracked me up!

Are you sure? It might just have been a dog on meth.

I’d look to native plants, as much as possible, both for food cultivation and supporting native pollinators - and should require less water, too.

Finding a balance takes time and, if you’re planting in a communal area, your plot and what grows will be impacted by what your neighbors are planting.

Do you have any local or state Dept of Ag resources, Native American tribes, or local native plant organizations which can advise?

Here, we have a plethora of wildlife (raccoons, opossums, wood rats, squirrels [ground and tree], plus an abundance of native and introduced birds), all of which have adapted to urban living and are thriving. And most of which happily decimate my food plants.

I have mostly given up on food plants, but for squash, and am putting in natives (sages are thriving in this crappy soil). They’re drought tolerant and I’m seeing a greater variety of native birds and insects, especially bees, butterflies, and hummingbirds.

My defense against deer is not so much the fence as the size of the garden - about 8’ X 12’ - and the fact that it has a raised bed. Deer could hop the fence and get in, but the garden is too small to allow them enough “runway” to hop back out.

our yard is fenced.
and we have deer.
usually on both sides . . . 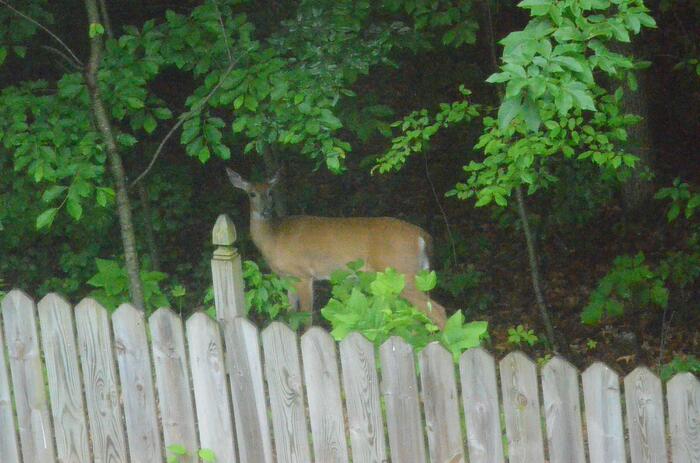 Right, and that’s because your yard offers them enough room to jump in both directions. They won’t go into a small fenced space, 'cause they need a running start to get back out.

Our most destructive varmints are deer followed by rabbits. The deer got into our small plot with eight foot fencing by leaning on the fence until it failed. Putting the poles in concrete was more than we were prepared to do so we gave up. If we can’t grow something in pots on our raised deck we don’t, except a small herb garden outside our front door.

The deer are hugely over-populated here because they are cute and people object to hunting even for culling. As a result the herds are very unhealthy and hungry and the deer will eat just about anything. There is no hope.

Besides insects, cats are the major varmint here. They especially like the strawberry pots and use them as toilet. Only netting or wire mesh are useful to stop them. I’ve tried aluminum foil, water bottles, smelly herbs, pepper corns, citrus peels, no effect in stopping them.

Grrrrrr…I have even tried spikes, and people would ask why I had spikes and cages positioned in my beds, all to no avail. 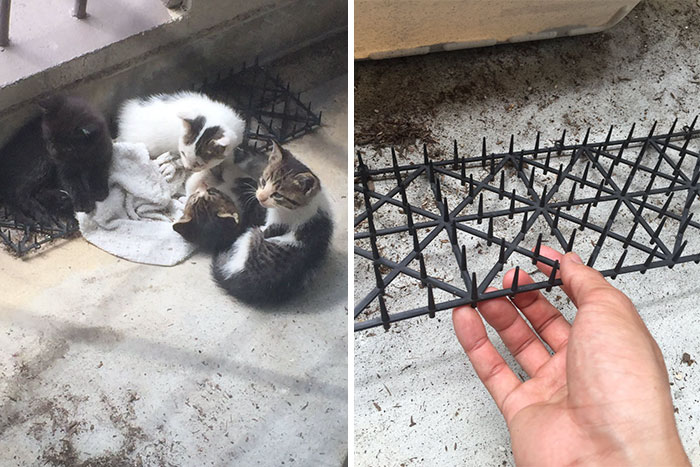 I imagined the cats positioning themselves AROUND the spikes to share their gifts. 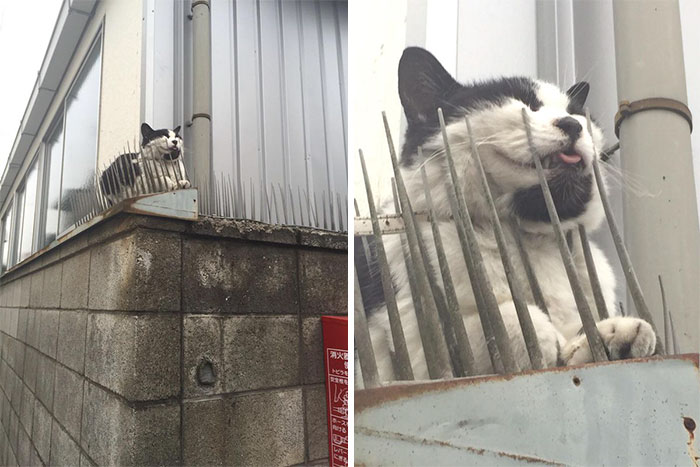 Alright, I withdraw the suggestion. I know they’re dangerous if ingested, but since cats don’t like the smell, they’re unlikely to ingest them.

LOL. Can kitties be wicked? Decades ago, my father used to say my cat was “trying to make a fool of him”. At the time, I thought it was crazy.

About spikes. I prune roses quite often, cutting the branches after flowerings. I sometimes toss the branches in the pots or sticking them in soil. Cats won’t go near, but it can be dangerous for the gardener as well.