Based on the Injeera thread popping up, I was thinking Ethiopian after seeing a play at Ashby Stage - and hadn’t had Ethiopian in forever. GF had it once, but Ethiopian is very poorly represented on the peninsula and san jose, so we poked around on Y*lp a bit, and found Lemat well reviewed nearby and open late … but it wasn’t open late, there was no one there so they closed early. We ended up at Cafe Eritrea d’Afrique, one of the older school places, which is at about 40th and Telegraph, and had a bang-up meal. The spices could have been a bit brighter, but the injeera had that satisfying tang without being overwhelming, and everything was very good. We sat at the bar and were served by a woman who could only be the owner, and probably her daughter. Most of the language around us was not English, and the place was hopping - at 10pm Saturday we snagged the only seats in the house
. We got a “special platter for 2” which was really enough for 3 to 4, so we took a lot home. They had some kind of Ethiopian “craft beer” ( St Johns? ) that was simply a beer made with a bit more malt and better ingredients.

The hipsters, or even old “foodies” like me, hadn’t invaded yet. It was like eating in the Oakland I love, with locals, cooked by locals.

When I used to live in the area, I mostly ended up at Asmara at 51st because it was closest to my house. There is/was Red Sea across from the Kingfisher, there was a place further up near where my drummer used to live… but all that info is more than a decade old.

The point of writing - what’s the state of play for Ethiopian along Telegraph these days?

My favorite right now is Abesha. Their Special Kitfo in particular. Colucci,
is still good though it is always packed and a pretty crap environment.
As far as Beer goes most Ethiopian Beer is not what I would consider Craft. St. George is fairly typical, still think Harar represents the style best (owned by Heineken) more Honey flavor but not as sweet.

I’m curious to hear how the shiro wat (chickpea and/or fava bean flour stew) is at each place, and what type of fat the vegetarian dishes in general are made of – vegetable oil, ghee, or Spiced Clarified Butter (Niter Kibbeh).

I’ve eaten at both Colucci and Cafe Eritrea in the last six months and found not a huge amount of difference in the food, but I felt like Colucci was a bit overpriced.

My Ethiopian restaurant sampling isn’t as extensive as it should be, largely because a lot of my Ethiopian dining is done with a group of friends that includes vegetarians, gluten-free, a dairy intolerance severe enough to avoid butter. Enssaro can deliver the all-teff injera, and vegetarian dishes other than shiro are usually vegan at most places, for fasting practices which, according to this article, can occupy up to 2/3 of the year . 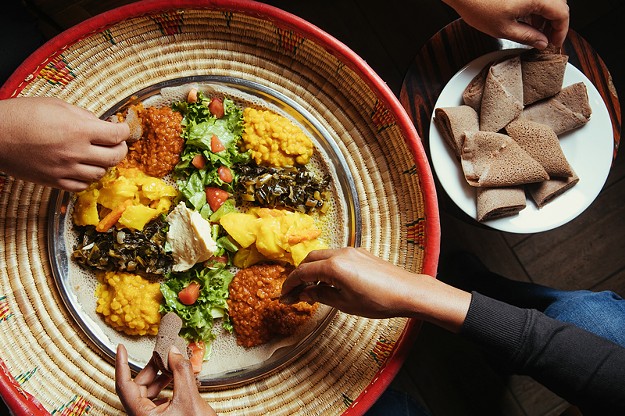 The Curious History of the Eritrean and Ethiopian Veggie Combo | Taste |...

Fasting foods, 'chickpea fish,' and East Bay restaurants that are going beyond misir and hamli.

I like the shiro best at Cafe Romanat, largely due to the nicely spiced niter kibbeh and smooth yet scoopable texture. I hadn’t been to Cafe Colucci in years, having found my initial visits where more meat dishes were ordered to be a bit timid in a way that I initially interpreted as Berkeley healthy. I’ve been back a few times this year after realizing how much I like their deliciously mustardy Azifa. I’ve tried and failed to recreate the creamy mustard dressing at home but my attempts have paled in comparison.

Ethiopian is very poorly represented on the peninsula and san jose

No love for any in SJC?

We slowed down exploring the Ethiopian/Eritrean places when my DH was diagnosed with diabetes. It’s taken us a while to work them back into our rotation. In the past 2 yrs we’ve gone to:
Enssaro. Back in 2013 we really enjoyed this. Gutsy, spicy, good niter kibbeh. Very disappointing when a return Sept 2017 saw big changes. Meat platter was bland and uninteresting. Veggie platter was okay; the Ye Messer Wot, red lentils, was very fine but Kik Alisha, Alta-Kilt, and Gommen were average. The really outstanding meat samosas are apparently gone.

Red Sea. Dinner is a waste of time, the bargain lunch buffet often has the same dishes for a flat price and table service here is just ridiculously slow. We were last here Nov 2016 and the spicing was still gutsy and there is lavish use of niter kibbeh, which we like. Meats are better than veggie dishes.

Ethiopia. June 2016 visit. Bland spicing and the overuse of straight Eureka lemon juice on the gommen and the green salad made me wince. DH disliked the niter kibbeh here, which is used generously so this place was a no–go right there.

Addis. May 2016, under new owners and not as good as before. The meat and veggie combos both have an injera stir-fry dish included. We are never fond of this type of stir-fry so we did the “Addis combo” which is a chef’s choice meats and veggies platter. We loved the injera, made with teff, barley, and wheat. Portions are generous. Except for the heat of berbere in some dishes, the food is decidedly underseasoned. There is little gravy to be found; what is there is one-dimensional in flavor. Meats were overcooked; veggies underdone. We do not like crunchy lentils under ANY circumstances.

Abesha. Two visits, original in 2012 and update Nov 2015. Consistent; both times we found the meat dishes better than the veggie ones. The yellow split peas, gommen, and mushroom wot stood out.

Pre–2014:
Café Colucci. First place rank for shiro. But outside of that and the really good drinks menu, we weren’t impressed. EVOO does not sub for niter kibbeh and red palm oil, IMHO.

Café Romanat. We have intended to return; we liked this place and rated it 2nd behind Abesha. Loved the Buticha, enjoyed the Gomen and Atakilt. Both red and yellow lentils were bland and uninteresting. Meats were good but somewhat underspiced, rated average.

Café Eritrea. Visited twice in 2013. Meats were fine, shiro is very good (second to Colucci). But veggie combos were skimpy and poorly executed. Should probably return and try again.

We tried once but did not like Messob, YaYa (now closed), and Asmara.

Thanks for the dates and info!

Too bad about Enssaro-- I wonder if they’re suffering has something to do with the move across the street.

Next time I’m in the East Bay, I’ll try Colucci’s shiro-- the version I recently had at Club Waziema in SF was so heavy on the ghee (niter kibbeh?), that I’d like a less rich version to compare with.

A question not related to Ethiopian- how do you keep track of your meals? I barely remember details from yesterday’s meals, let alone 5 years ago.

Personally - I simply remember them, I have no “outboard” tracking.
The best way I know to help remember things is to “refresh” the memory. In a reasonable period of time, simply go through and remember them. For example, at the end of the day before falling asleep, remember all the things that happened that day. And remember the things that happened the previous days and weeks. This refreshes and essentially tells the brain those things are worth remembering - in computer science terms, by accessing, you reduce the change those neurons will be garbage collected. I commonly write things down that I wish to remember, but simply review those things once ( or twice ) which cements them in my memory.

We like Barcote, across the street from Cafe Colucci. First, it is just a short walk from our house; second, they have a very nice outdoor patio in the back; and they have a ten-dollar corkage fee. I always order the dulet (cooked; you can also get it raw). It is less crowded than Coluuci; last time I was at Colucci (years ago) it was very noisy inside, and the outside dining is right on the sidewalk on Telegraph. But I am not an expert on Ethiopian food.

A question not related to Ethiopian- how do you keep track of your meals? I barely remember details from yesterday’s meals, let alone 5 years ago.

I type up full reviews of every place we have gone to since my DH joined me in retirement. Only wrote up the “biggies” pre-2010, but starting in Jan 2010 we began dining out so often that I just got into the habit of writing up everything.

Otherwise, it’s almost impossible to recall specific details of, say, the 2013 dinner at Aziza compared to the 2015 Aziza meal. Our fav places we will visit multiple times; others maybe get two or three visits; many only get that one chance and are crossed off the list unless somebody convinces us to try again.

The system works for me and allows me to also keep notes from the various blogger/critic/forums, such as chef changes and such.