I was trying to think of something different for lunch on Friday and maybe even something “fried chicken-y” and I thought of Union Kitchen on Memorial between Gessner and the West Belt. It’s in the old Lantern Lane Center where Fresh Market now occupies the spot where Rice Epicurean lived for decades and where Union Kitchen now occupies the spot where Hunan Emperor once resided.

If you’re not from around here, chicken fried chicken is a chicken breast, pounded enough to provide a uniform thickness and then battered and deep fried and served smothered in cream gravy. Union Kitchen makes a good one. Their’s was served atop a mound of mashed potatoes and alongside sauteed veggies, carrots, zucchini, yellow squash, carrots and asparagus. It was pretty darned good.

To start I ordered the soup of the day, which turned out to be one of the best bowls of French Onion I’ve ever had. The broth was rich and beefy, the cheese real Gruyere.

If you go, ask what the soup is and if it is FOS, get it.

I’ve had lots of different things there - the ahi tuna sandwich is terrific. It reminds me of a tuna roll at a sushi restaurant. Really good. The burgers are terrific; (Oh Yeah! Note to self!).

CFC is my guilty pleasure. I’ll have to try theirs. I haven’t been in a while, the things I’ve ordered have been okay, just not great.

Sorry to see this board has died. Perhaps we could have one final get together to celebrate its passing?

I continue to be tied up but I did manage to get to one of my group’s lunches. Union Kitchen had been suggested and that’s where we wound up. I went straight for the grilled tuna sandwich as did the guy who suggested UK. He said he had had it ‘hundreds of times’ including just a few days earlier but we were the only ones who went for it.

First bite made it apparent it’s a better sandwich than what I had at Paulie’s. Smaller but more satisfying. Mine was a little over-done from what I wanted while the other guy sent his back to touch the grill a bit longer - his looked rarer than mine; maybe we should have just switched.

The bread is better than Paulie’s and the choice of condiments. I particularly liked the sweet chili sauce.

Funny thing, I returned last week also and had a smoked salmon club. It was good, but I don’t know what makes it a club, other than a little bacon. I didn’t like the brioche much and ended up forking the salmon.

I post on this board, but it’s mostly a party of one.

Sorry to see this board has died. Perhaps we could have one final get together to celebrate its passing?

The only thing that will give this board the critical mass required to be self-sustaining is content. You have certainly done a yeoman’s share Bruce. You have pretty much single-handedly carried this board. I would hate to see you stop now.

I’ve tried to help out but the truth is that I am tending to eat out less and tending to hit the same places more.

But if we all, (Lambsy, Jaymes, Ostiones, et al I’m looking at you!), continue to post whenever we have something to say, it will get to that point. Give the great unwashed something to find on Google and come read. Maybe a few of them will stick around if only to argue with me. I’m up for it.

And then write about it!

Edited to add: We also appreciate the contributions of our new friend DownSouth. I went to the “Introduce Ourselves” thread to see what YOUR story is, but you apparently haven’t posted there. (Nor have I, I learned!)

Are you from Chowhounds and if so, what was your handle there? What part of town are you in? Are you an attractive young woman with daddy issues? Inquiring minds and all that…

We went for a second weekend brunch visit. We keep returning because it is an upbeat fun place with an exciting menu that is not always well executed.

And so it was again.

I had the “Hot Mess” which is sausage and 2 kinds of bacon on a biscuit topped with an egg cooked to order (over easy), gravy, cheese and green onions. (Photo)

Dude had the crab cake Benedict - you know, poached eggs and hollandaise being the star attractions.

The eggs were ALL over medium, nary a drop of golden goodness flowed anywhere. My dish was otherwise pretty good though I would respectfully request they make the gravy with drippings because it needs some meaty flavor. The hollandaise was so sparingly applied that between that and the over poached eggs, it was a dry unsatisfying dish.

The Bloody Maria made with tequila made it all not so bad.

It could all be so great if more attention was devoted to the execution. The chicken fried chicken with biscuits and gravy seems to be the brunch favorite. 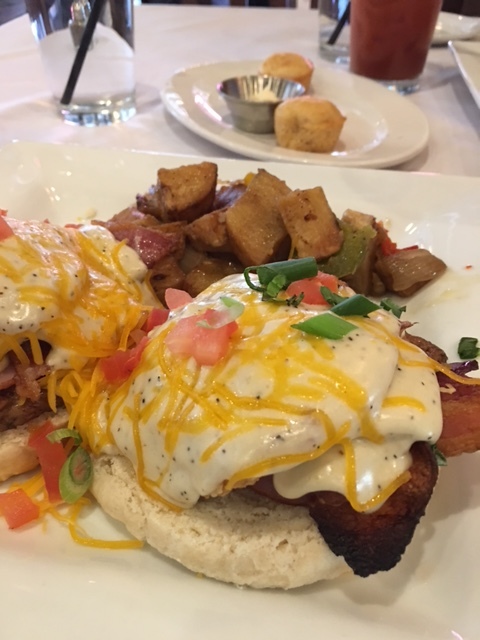