Uma Casa is a Portuguese place that opened in January of this year. Went two nights ago and loved it.

Cocktails are all of the amaro, vermut, sherry, type (no liquor license), and there is a good selection of Portuguese and Spanish wines. With our dinner we had a very interesting bottle of a Portuguese red bubbly - Luis Pato Casta Baga Beiras NV - made with the Baga grape - a thick-skinned, dark grape. It was flinty bone dry and very refreshing.

The sardines over caramelized onions and hard boiled eggs were seriously swoon-worthy, and worth the bone-picking. I would have a whole plate to myself next time.

I’m a new appreciator of croquetas, after visiting Lisbon early last year, and the pasteis de bacalao here were a fine example of them. Creamy inside, but with little chunks of potato.

The octopus could have used a little charring for me but otherwise was tender in
The wings were a little tough but the sauce was great, and what i remember of the piri piri in Lisbon.

The polenta cake was probably my least favorite of the savory dishes, but one of my friends’ favorite. i found the sauce too sweet, but otherwise the cake itself was prepared nicely - crispy outside, tender inside.

We split two desserts: a forgettable cheesecake thing, and the pasteis de nata, was sadly, was nothing like what you find in Lisbon or Belem - even the ones i had in the airport were better. No tender flakiness, no butteriness… you had to saw through this one to get a bite, with a knife.

The place itself is lovely and airy, the service warm and attentive. This feels like a personal passion project for Chef Telmo Faria (formerly of Tacolicious). I’d go back in a heartbeat and take people with me. 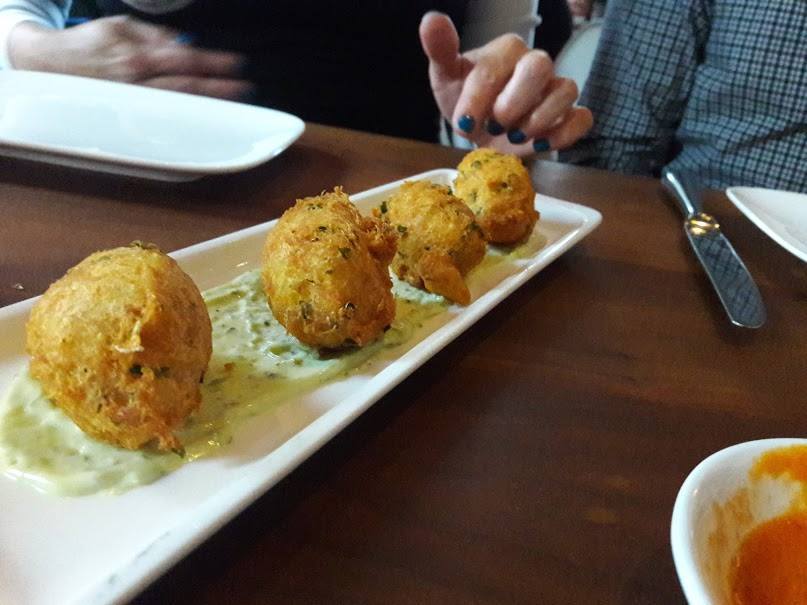 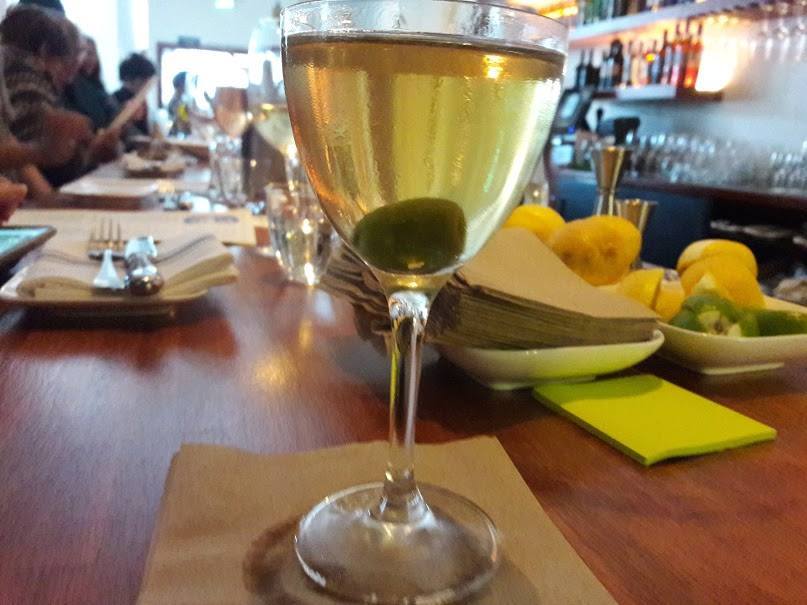 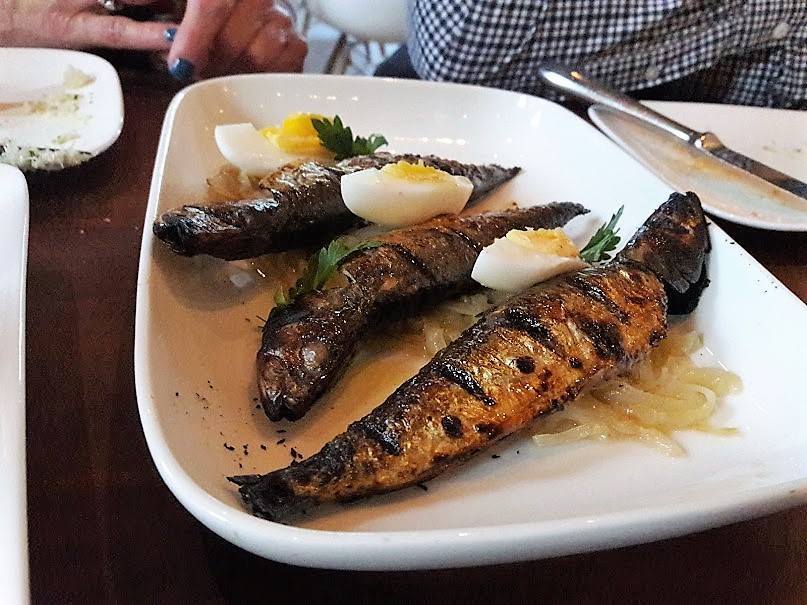 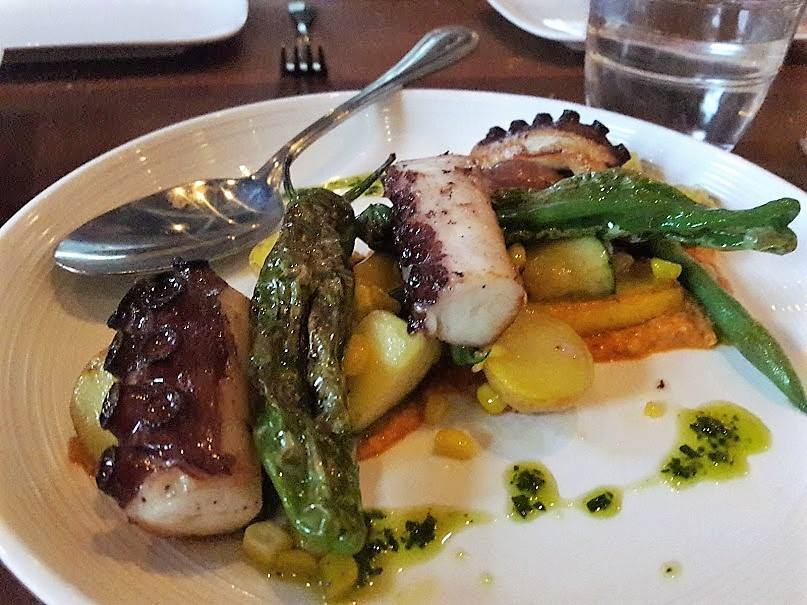 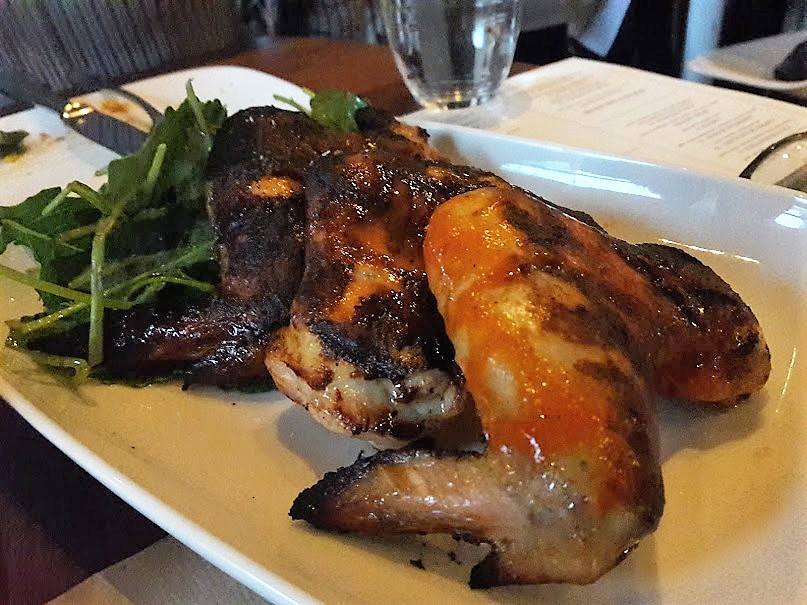 Do they have regular bacalao in mashed form? I am asking because once I had a homemade version of it that was absolutely delicious. I am still looking for one that measures up to that.

I hang my head in disappointment to say that I never had a nata when I was in Belem. How are they like? Any where close to the natas from e.g. local bakeries serving the Macao version?

I was thinking at some point making a trip to Adega the Portugese restaurant in San Jose. But this one sure looks good. Thanks for the report.

I’m not sure what you mean by “regular in mashed form?” this was, i assumed, salt cod, mashed, blended with mashed potatoes, then turned into croquettes, floured, etc., then fried…

the pasteis de nata are a delight! a very tender custard in a very flaky pastry, but crispy, and super buttery. i would say a little bit like a chinese egg custard, but softer - the custard should almost be a little runny, and flakier. And NOT too sweet. i don’t think i’ve had the Macao version…

would look forward to hearing about the San Jose place!

I’m not sure what you mean by “regular in mashed form?” this was, i assumed, salt cod, mashed, blended with mashed potatoes, then turned into croquettes, floured, etc., then fried…

‘Regular’ is the wrong word. I was just referring to the salt cod mashed and blended with mashed potatoes, basically what’s inside the croquettes.

no, I’d tasted some at Spanish Table in Berkeley but they don’t carry them anymore, and of course they couldn’t compare to the ones made fresh out of the oven in Lisbon and Belem.

Went this weekend and had a very enjoyable meal.

Pasteis de bacalhau- plenty of salted cod interspersed with small pieces of soft potatoes. Slightly crunchy outside and soft inside. 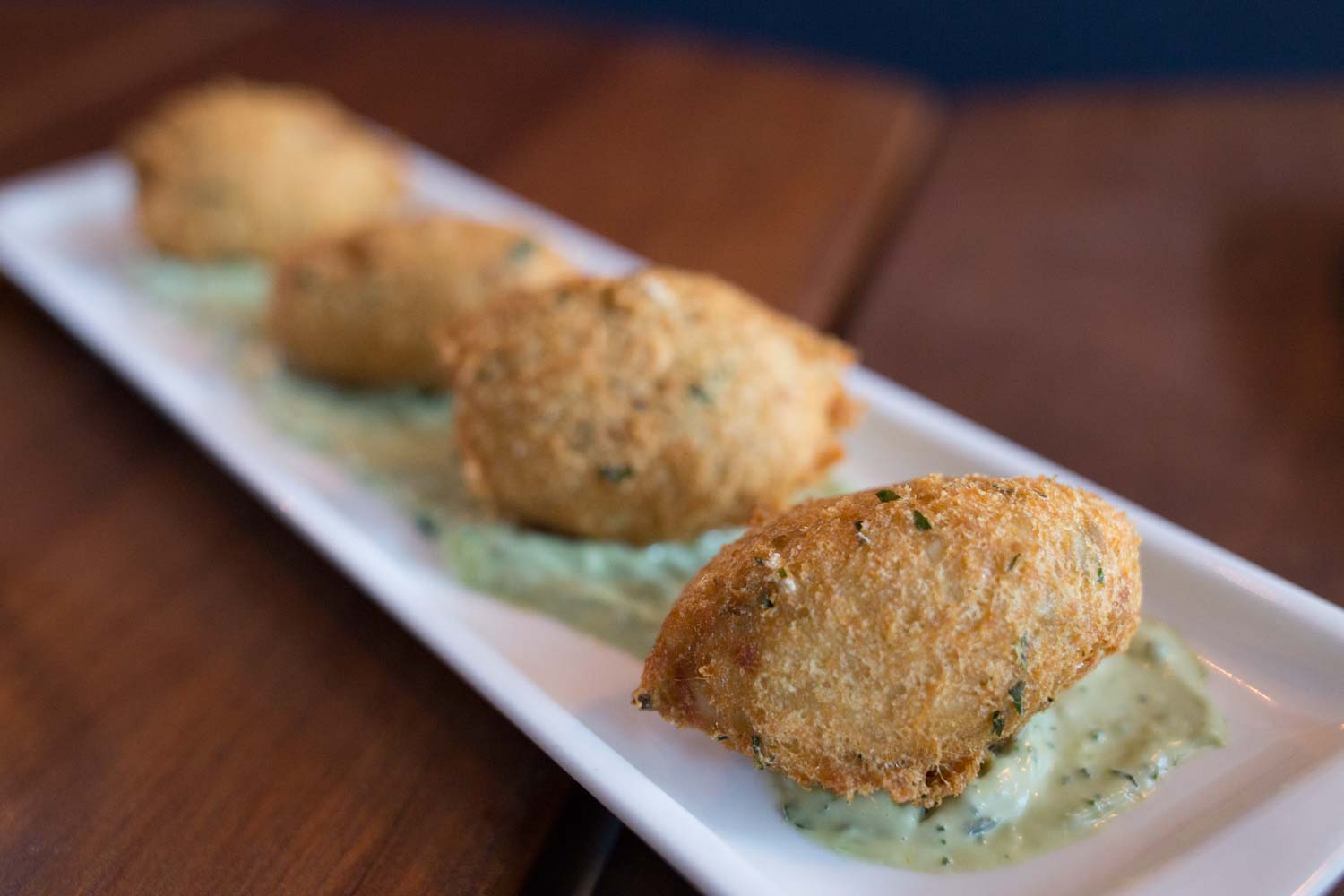 Caldo verde- didn’t see the potatoes but they probably already blended it into the broth. Kale was cut into narrow strips. the linguiça sausage added a bit of tang. Simple and delicious. Liked it much. 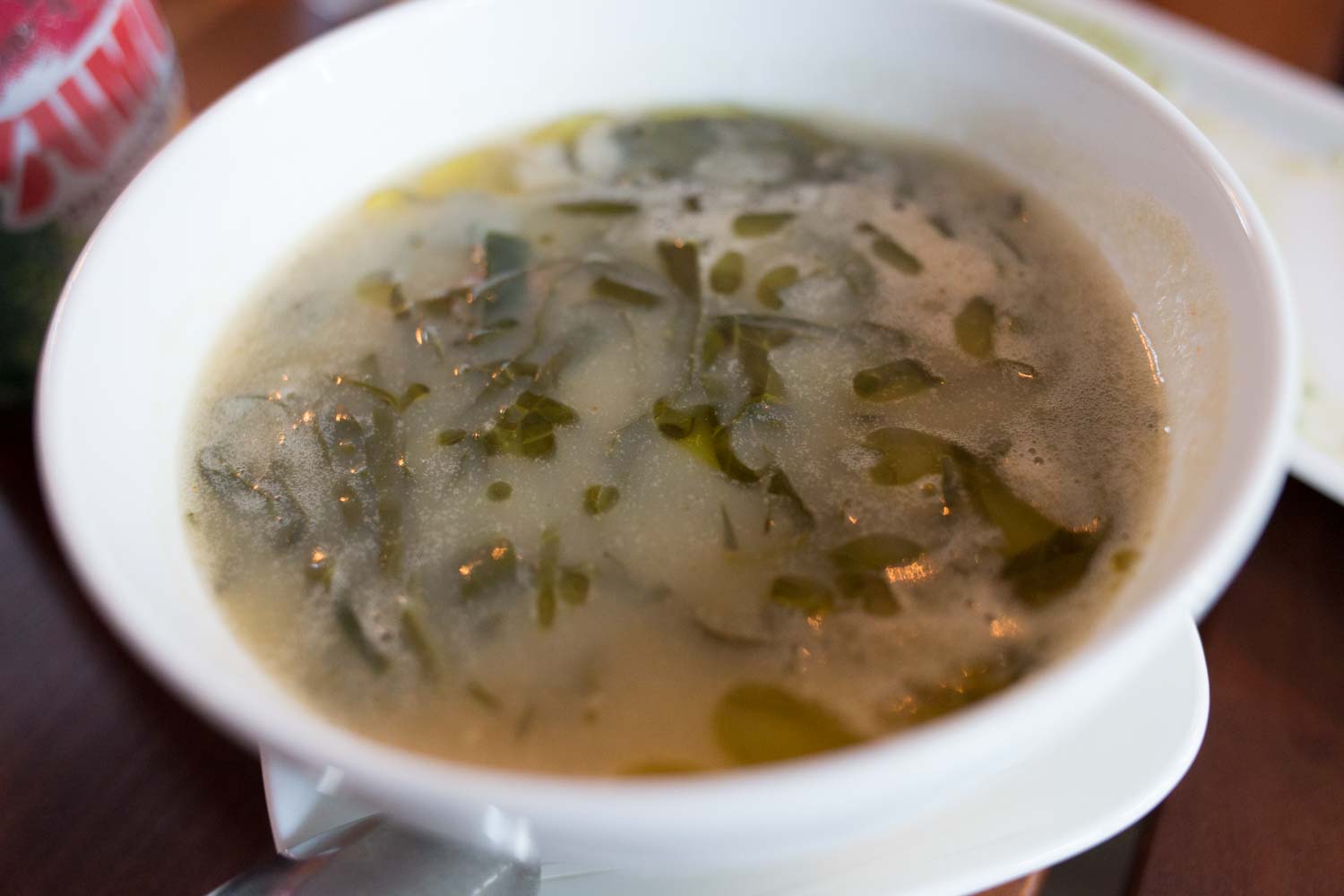 @mariacarmen, looks like they charred our octopus a bit more. Smoky and delicious. 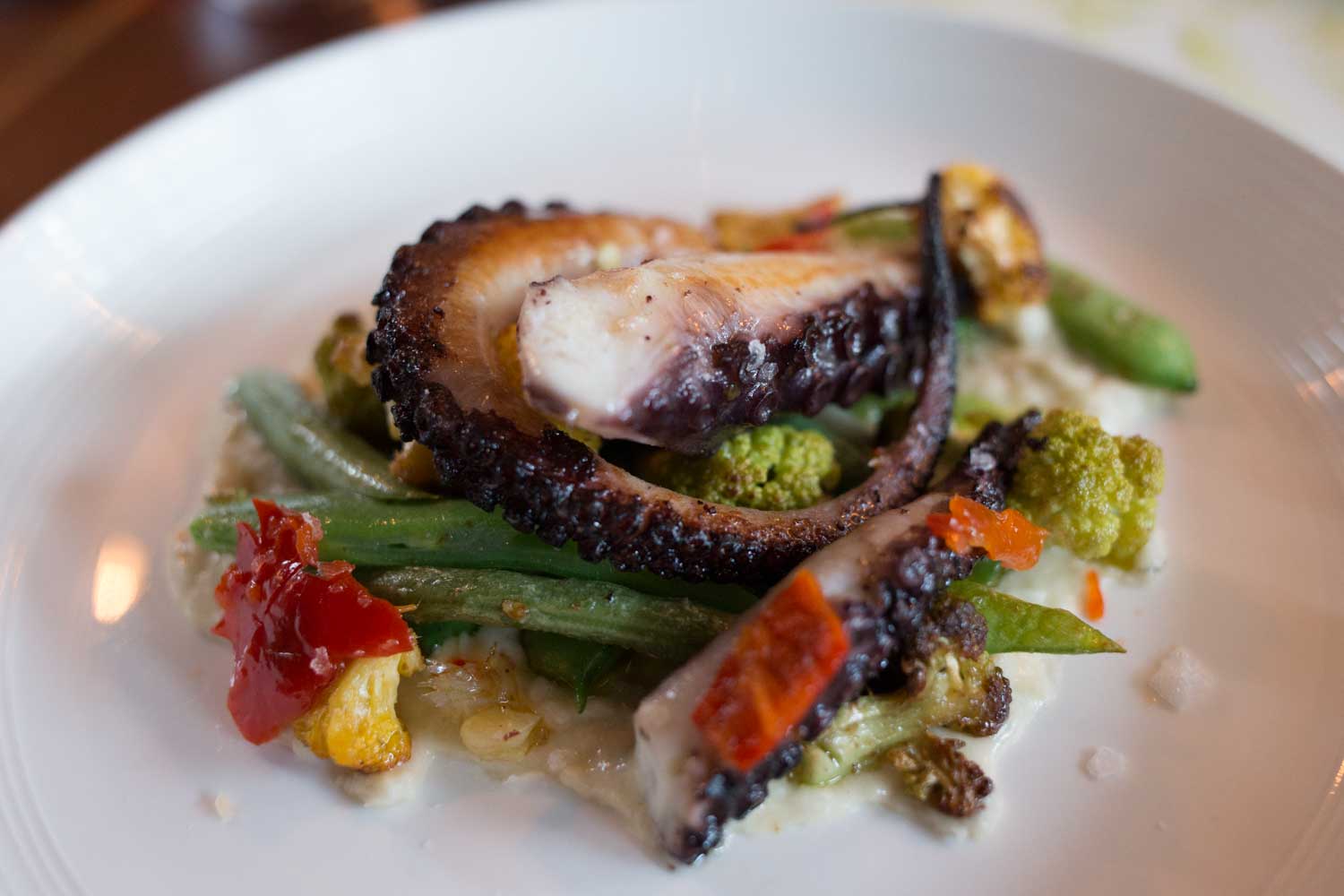 Linguado/ halibut. The highlight to me was the molho cru, a type of Portuguese chimichurri- bright and tangy. The halibut was cooked fine, though underseasoned. I think this was more a dish for the Californians than the Portuguese though, but its probably hard to source the fishes they eat over there. 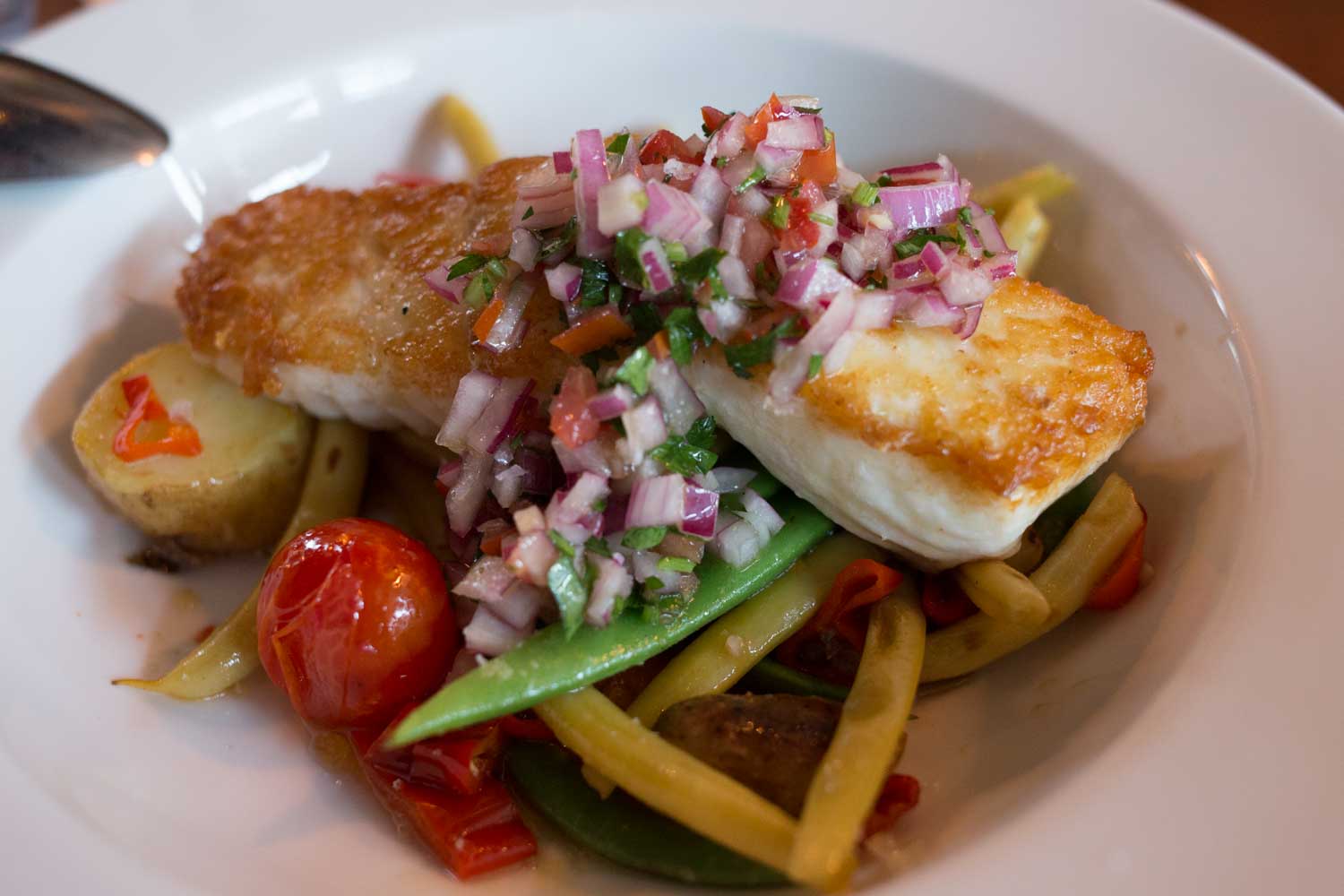 The sardinhas asadas- solid dish. We grill sardines at home in exactly the same manner, minus the egg and caramelized onion, so while we enjoyed the dish, the flavors were too familiar to us, but that’s our own problem. 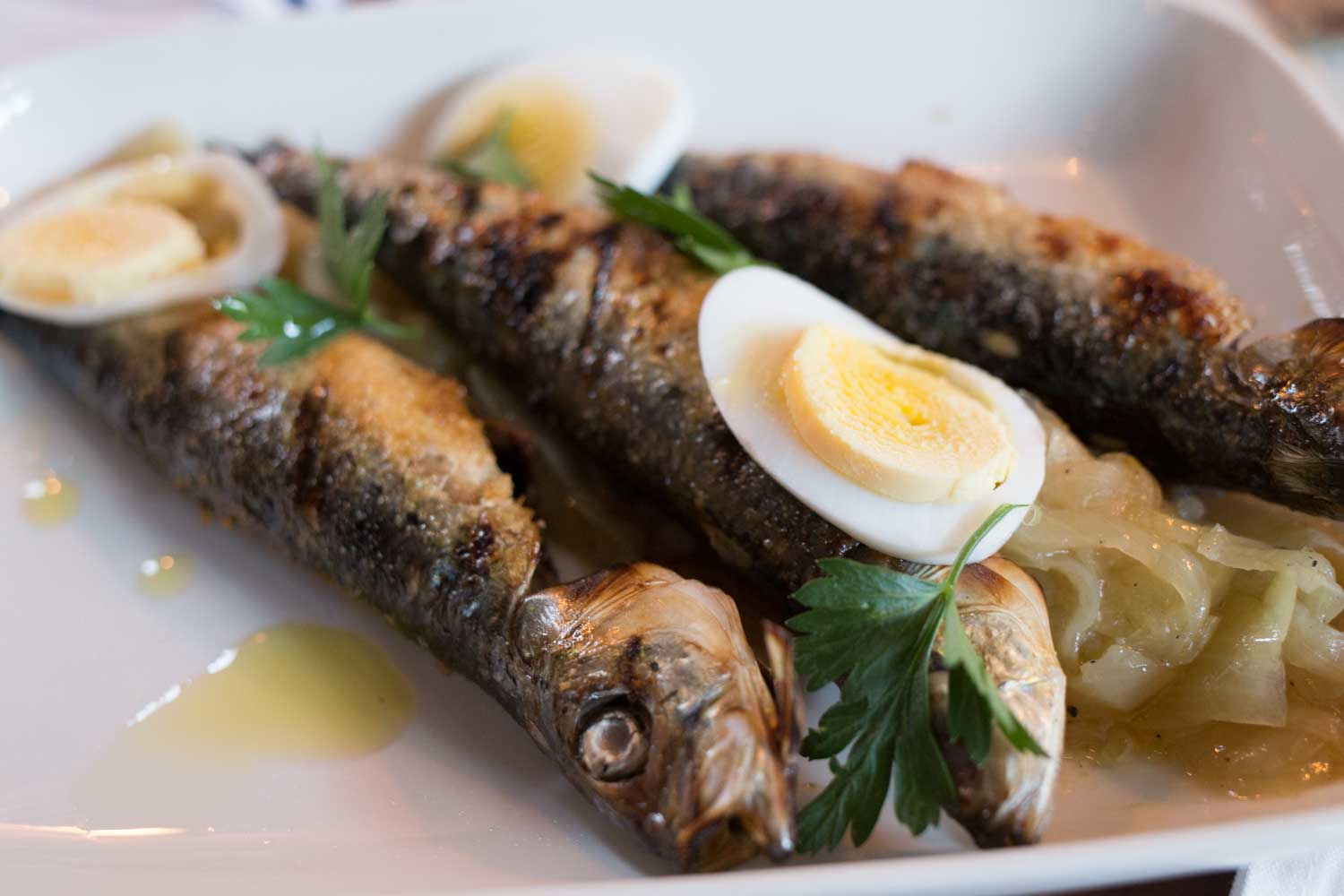 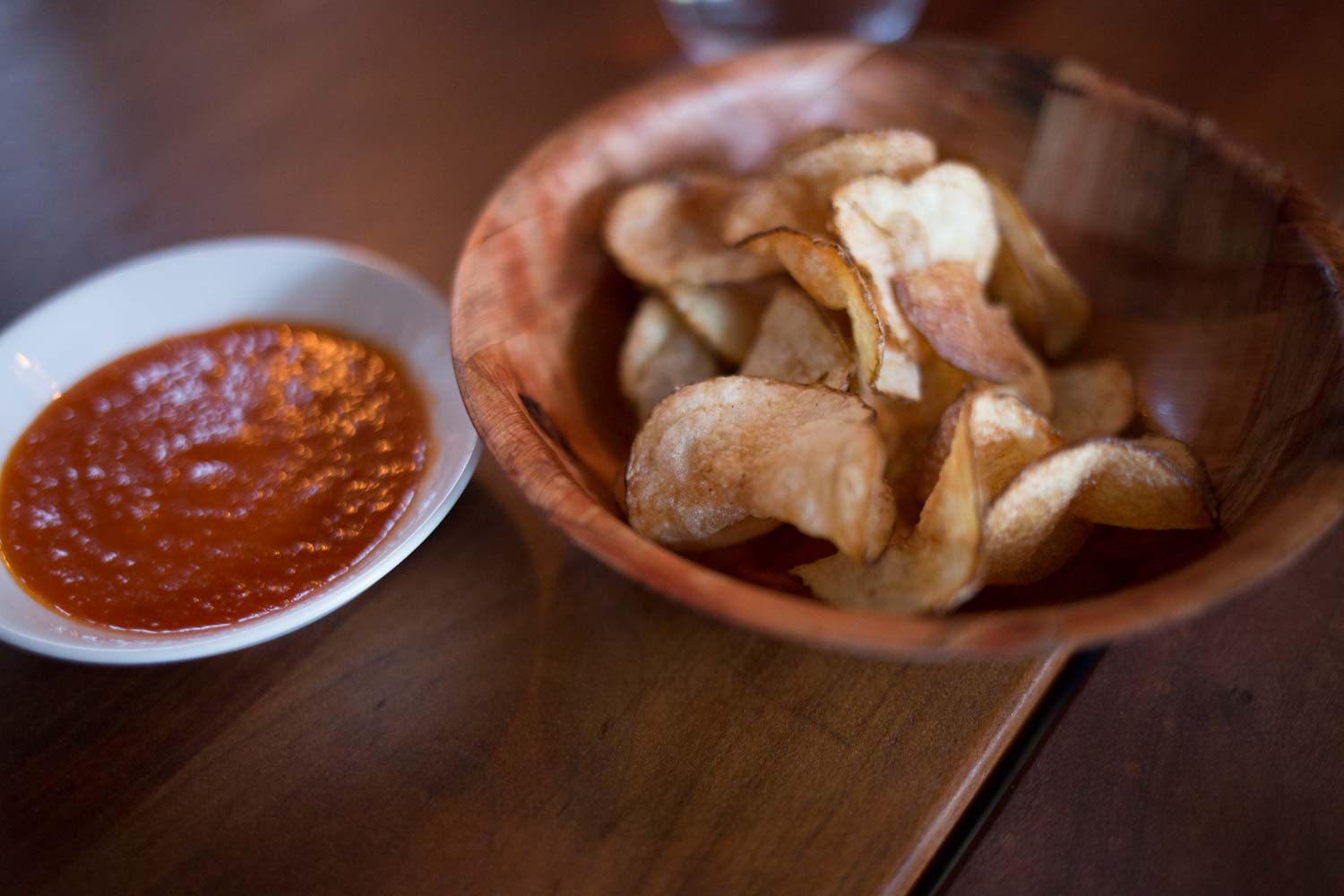 The Soalheiro Alvarinho Vinho Verde 2016 was very enjoyable- fresh and fruity. Have to stop by K&L some time to get a full bottle. I’d love to explore more of the Portuguese wine list. 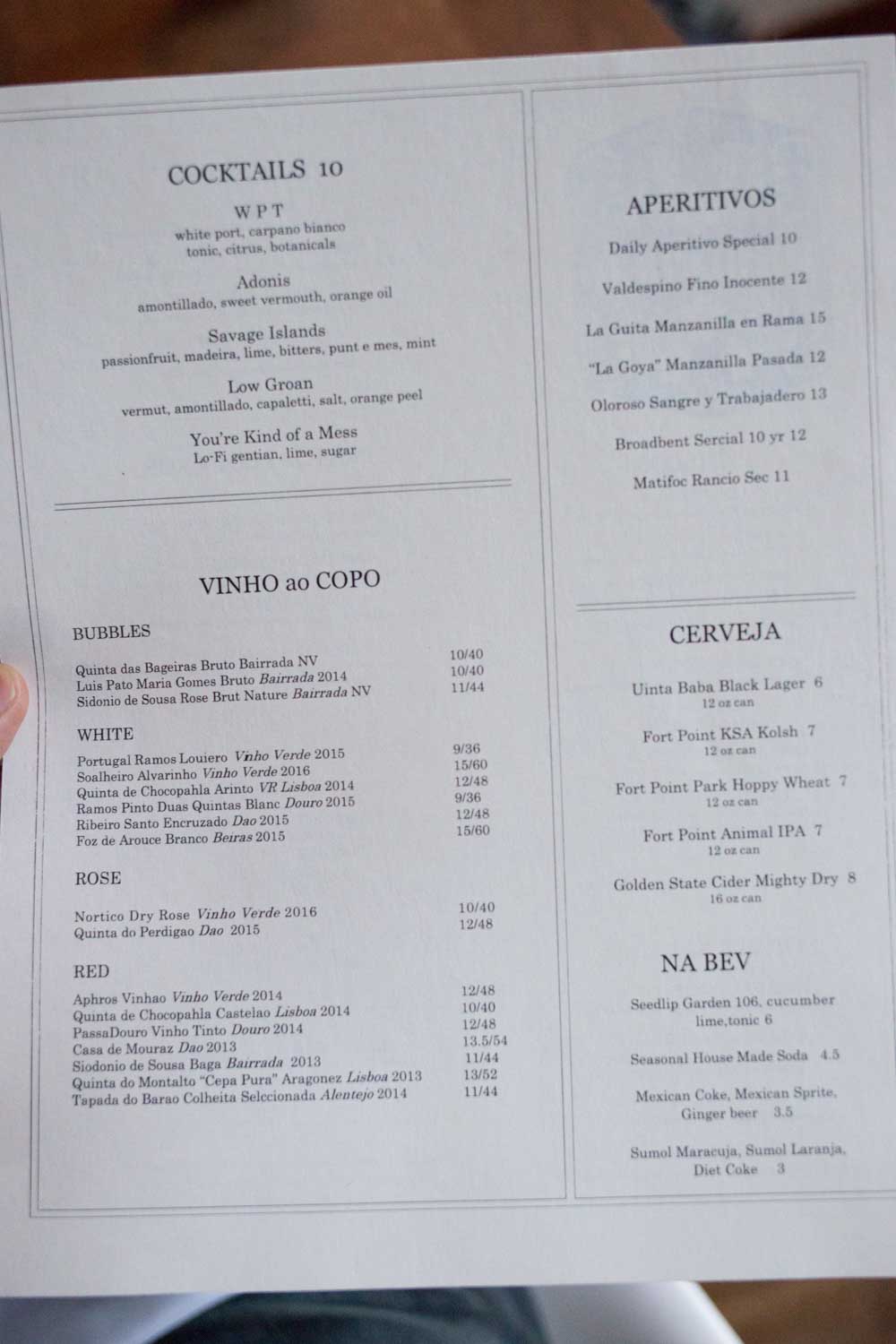 Not a huge fan of the barely cooked beans though in a few of the dishes. But overall, like @mariacarmen, I’d happy go back and drag people with me. At some point I just stopped using my fork and just used my hands to eat the sardines.

This looks wonderful! i’ll have to go back. Thanks for reporting…

I went Friday night. Had the sardines, bacalhau, house made bread with two fancy butters and a dish with loose lamb sausage over fava bean puree and what seemed like a sous-vide cooked egg that was really great when you cut the egg up and it all blended together. Not much to add to what has been reported, all very good. I usually don’t get involved with the low alcohol cocktail nonsense at most places without full liquor licenses, but the two cocktails I had there were quite delicious. WPT - made with white port and citrus was super refreshing and Savage Island with madeira and passion fruit was like a tiki cocktail. Walked in about 6:30 and got seated no problem but was full when we left.

i learned to love the alternative cocktails made with sherries, vermouth, bitters, in Spain, and find them very well represented in the City. They can actually pack quite a punch and the flavors are so varied and interesting.

i learned to love the alternative cocktails made with sherries, vermouth, bitters, in Spain, and find them very well represented in the City.

I think I’ve previously had one to many bad soju cocktails - and the “wine-a-rita” at a mexican joint without a full liquor license was the last straw. But you are right, these were so good that I’m tentatively stepping back into the low-alcohol fold.

He did give the thumbs up to Adega, but said that its so expensive…

hmmm, I’d not heard of Adega…

I would imagine if Chef Faria was from the Azores he would have put some reference to that on his menu / in his dishes, though, don’t you think? i’d be interested to see how the cuisine differs, but i probably won’t be trying Adega anytime soon (San Jose and $$$). Maybe there is just a lot of cross-over… thanks for the info!

Re: Adega. I looked into going there earlier but was thwarted by the lack of availability (need to plan a month ahead, which I just don’t do). Its definitely more expensive, especially so after accounting for the neighborhood ambiance.

Their new prie fixe seems like a pretty decent weekday option for $33. 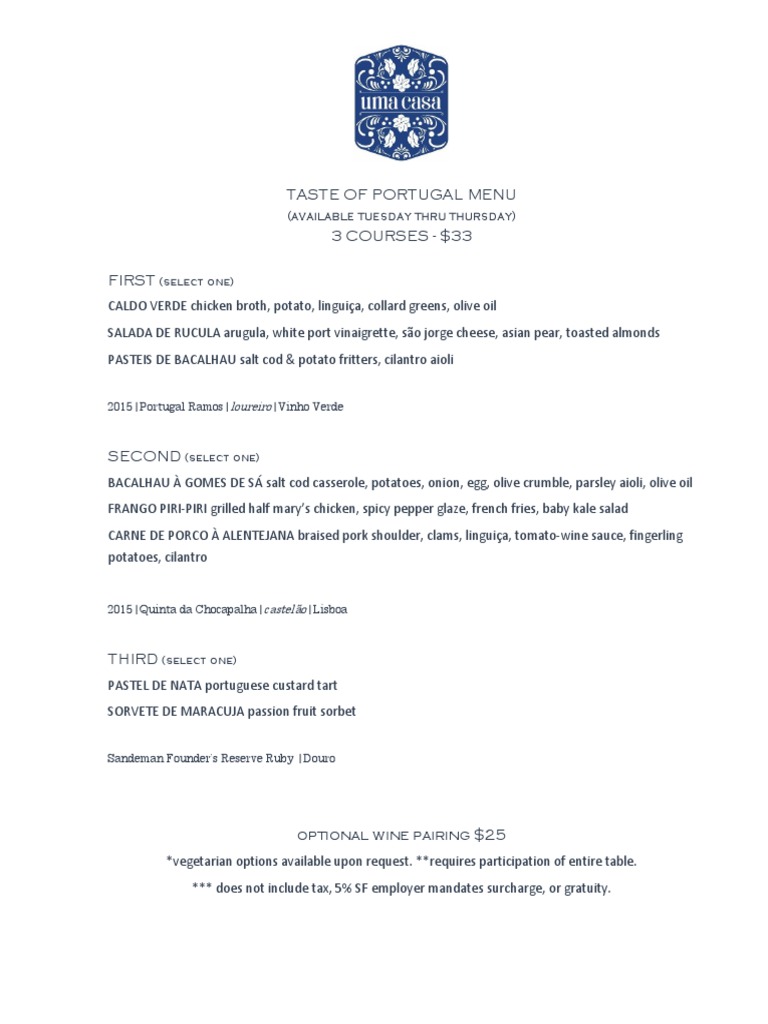 very! i’d be too tempted to get all the other items on the menu…

I’ve made it at home many times, would die to try it in a restaurant to see if i’m even close!

I was eyeing that pork shoulder as well…! If they don’t close at 930pm from T to Th, I would be seriously tempted to drive up and have a late dinner there. If you do go, please tell us how it is!

I went to a wine pairing dinner featuring Portuguese winemaker Sandra Tavares da Silva at Uma Casa a few weeks ago. It consisted of a 4 course dinner with a wine pairing for each course for $125. According to chef Telmo some of the courses were from the menu and some were especially for the pairing. I won’t comment on the wine (I should have taken more notes) but I do remember they all complemented the dishes well.

Some warm bread (from Acme) and butter. 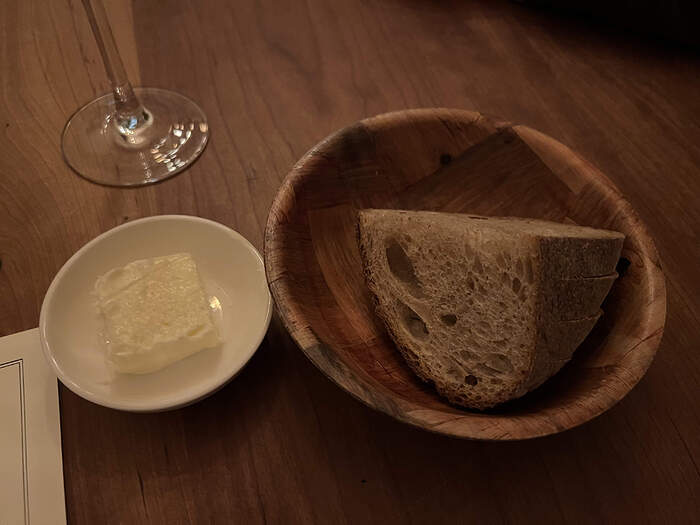 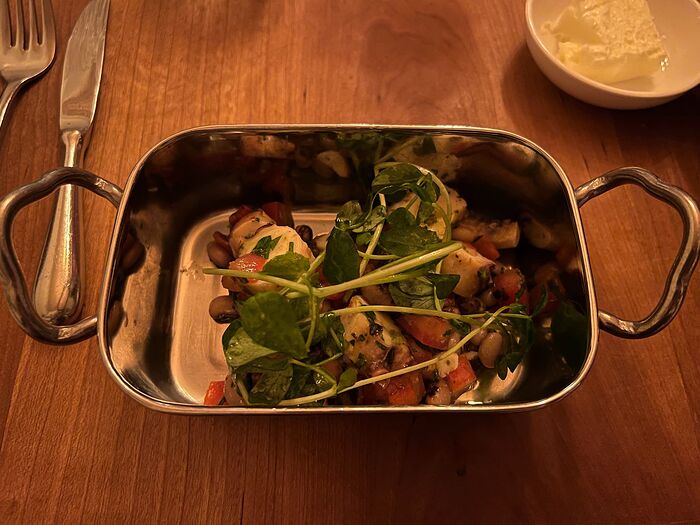 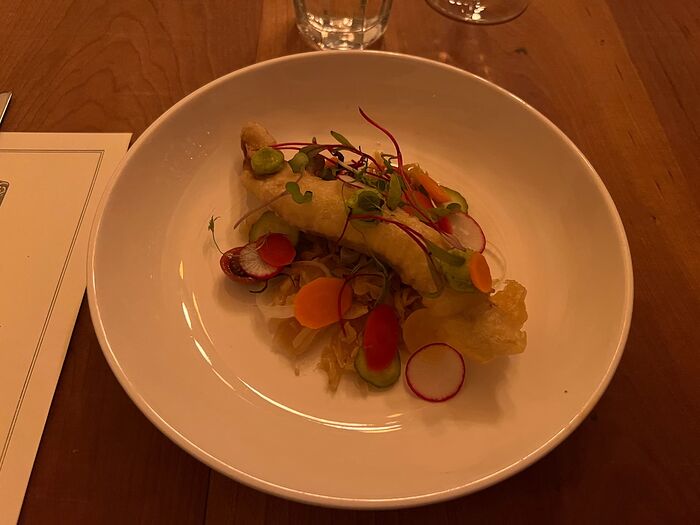 LOMBO de PORCO
pork tenderloin, brussel sprouts, cherry, squash
paired with: 2017 Quinta de Chocapalha, Castelão, Lisboa
At first glance looked like the pork could have been a little less done but actually it was very nicely cooked. A very seasonal fall tasting dish with two kinds of squashes - purée of butternut and slices of roasted delicata squash. Accompanied with a sweet and sour sauce that contained wine and cherry. 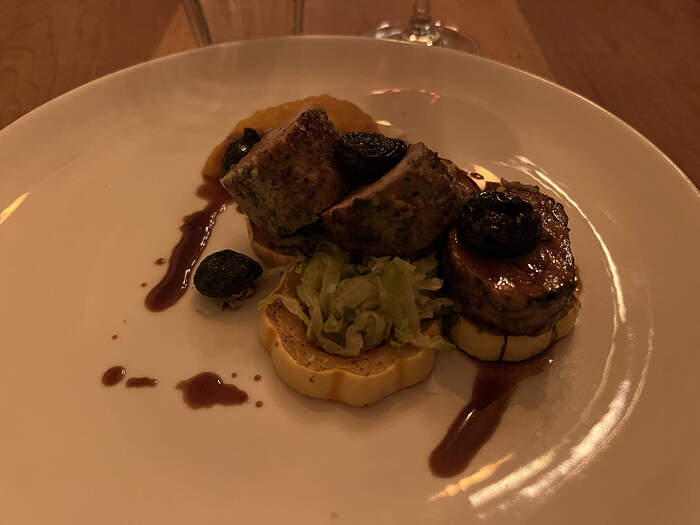 ALCATRA
braised short rib, root veg puree, broccolini
paired with: 2019 Pintas Character, Red Blend, Duoro
Chef said this was his version of an Azorean dish that usually had bacon in it. Very good. The short rib was very tender and you could taste clove and allspice in the sauce, which also had red wine. And also some broccolini, one of my favorite vegetables. 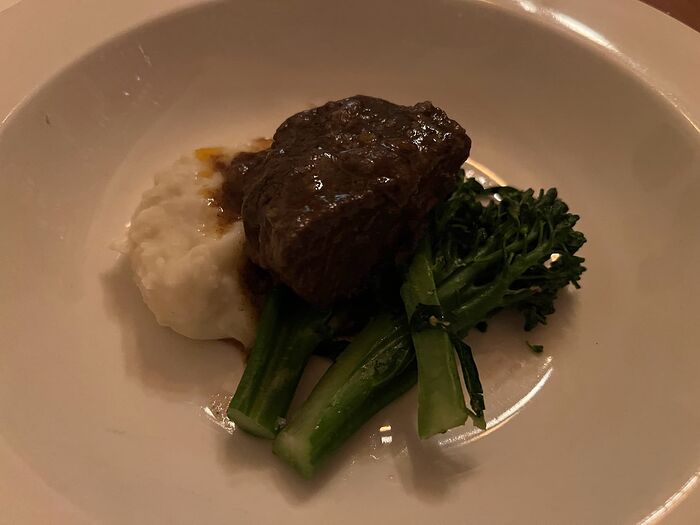 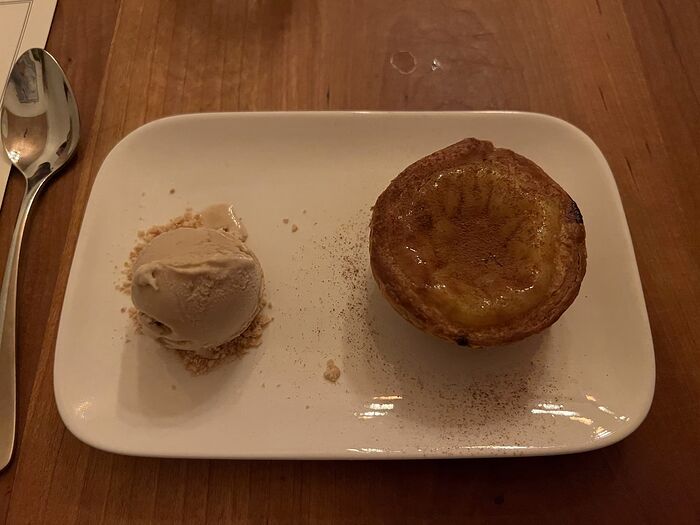 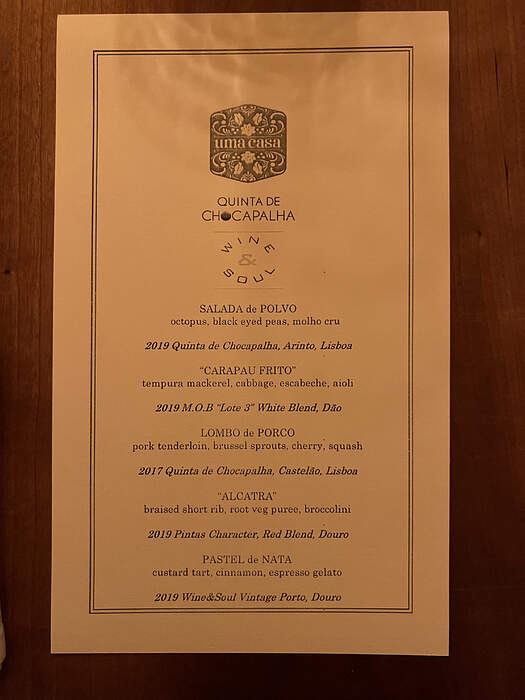 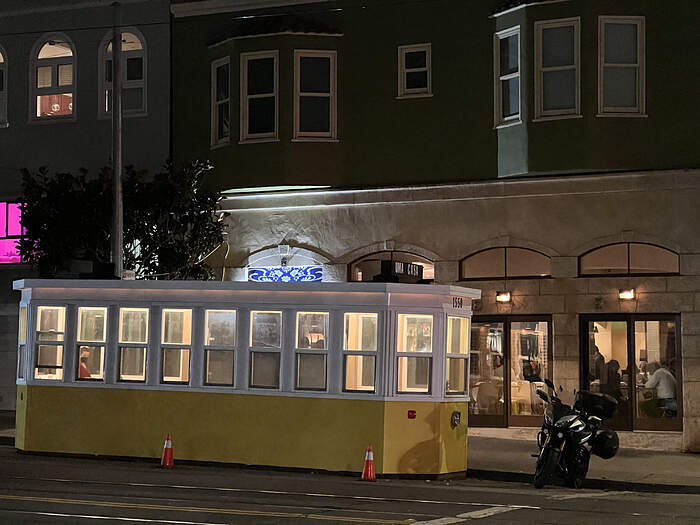 We loved the trams (I think we admired them from afar more than actually riding them).