I’ve been intending to take a couple of short road trips out of Houston and this one was high on my list of destinations. I’ve only been hearing about it for a few weeks but when I looked it up on Daniel Vaughan’s TMBBQ Blog I was amazed to realize I know the owner, or an older generation of the owners. I went to school with a Leonard Botello many eons ago. His family ran a grocery store in Velasco, north of the old Brazos River (now a part of Freeport). Years later I knew he was behind the acclaimed Café Annice in my home town of Lake Jackson. I never got to go, although I did sample their canapes and the like at a reception at the local historical museum celebrating the city’s anniversary. Now I was eager to sample the offerings of a younger generation of the family.

The place is tiny, about the same size inside as the original location of Gatlin’s in Houston. They’ve crammed more chairs and tables inside than Gatlin’s and people were sitting shoulder to shoulder, elbow to elbow and there was barely room to move. The outside smelled of wood smoke, the inside of barbecue sauce so I ate outside at sturdy picnic tables under an awning on a gently sloping rise beside the restaurant. 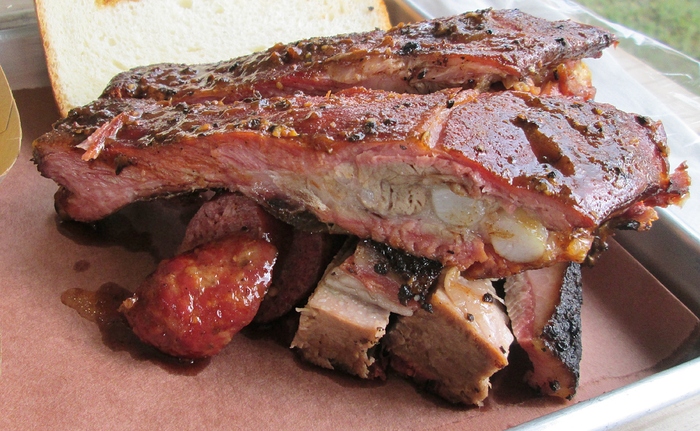 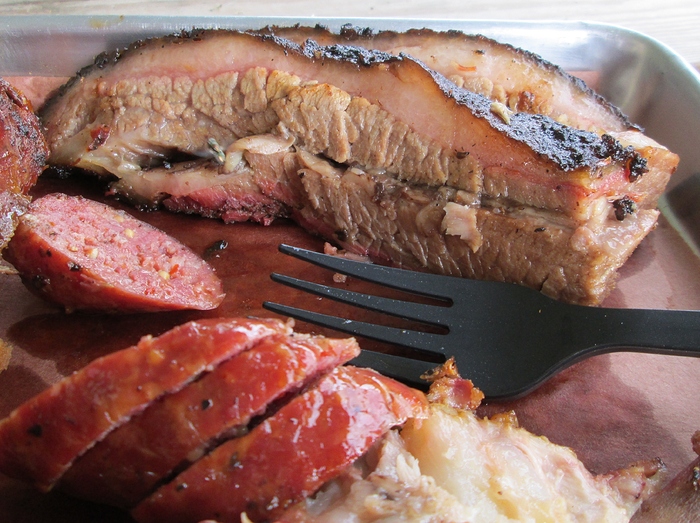 I wanted to sample as much as possible so I got a three meat plate, fatty brisket, custom-made sausage (from Prasek’s Hillje Smokehouse) and pork ribs. The pork ribs were huge and loaded with meat, the biggest one probably more than an inch thick and an inch and a half wide, and very moist and flavorful. A full slab had been pulled out of the holding box for my benefit and some of their sauce squeezed over it before my portion was sliced off. But - SPOILER ALERT FOR PURISTS - they were melt in your mouth, falling apart tender. Well, to be specific, as I was eating my way through the first one, the bone just fell out and plopped on the pan.

I did not detract any points for that but others may.

The sausage was also very juicy and flavorful (sorry, didn’t realize I hadn’t gotten a better shot), better than any sausage I can remember having from Prasek’s.

The brisket was the least impressive meat. It was tender enough but lacking in flavor compared to the other meats. The bark was just paper thin. It would have benefitted perhaps from a squeeze of their sauce but I had passed on grabbing one of the large squeeze bottles next to where you order and didn’t want to have to fight my way back inside. 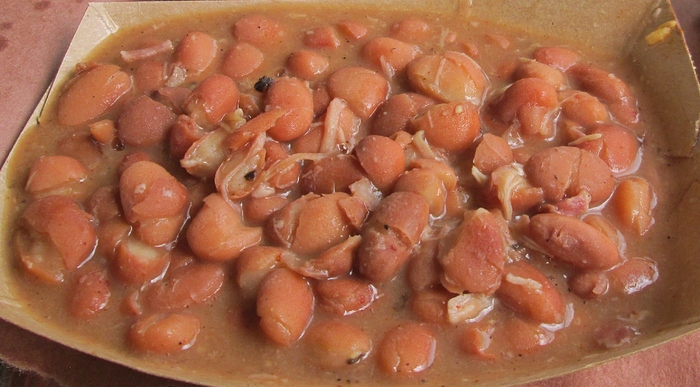 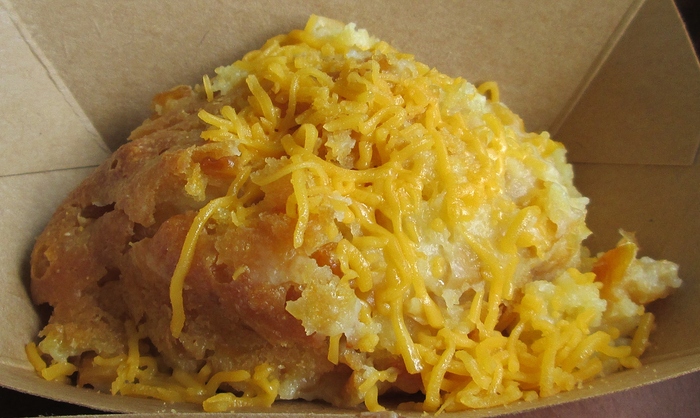 The pinto beans were good with bits of the smoky brisket, but not as good as some charros I have been nibbling on all week from a tortilleria near me. They also have baked beans. I was really looking forward to the corn pudding but was not pleased when a pinch of grated cheese was placed on the scoop. It needed cracked black pepper rather than cheese for my taste and both sides were in need of a little salt, I thought.

Pictures online clearly show onions and pickles are available but I missed them. I was asked if I wanted bread.

I have mentioned in the past on CH and probably here that I burned out on barbecue a few years back. It’s probably been ten years since I’ve been to Central Texas to eat Q and I’ve never been to Snow’s or Franklin’s. I still partake from time to time but memories fade and I won’t try to rank Truth in the pantheon of Texas barbecue. It was good ‘cue worth a stop off on your way or a special day trip as I did. And it’s a pleasant enough trip, especially if you avoid 290 while the construction is ongoing (it extends way outside 99; I came back via Texas 36 to I-10).

The place is easy to miss, marked only by 2 faded banners whipping in the breeze. I passed it 4 times before accidentally pulling into the driveway, turning around for another pass. It’s less than a mile west of the split of 36 and 290 on the west side of Brenham, across from Rose Bowl Lanes.

Note: I thought I had read the sausage is custom made by Prasek’s but it’s not mentioned in the TMBBQ article and I don’t remember where I read that so it’s subject to correction.

Brenham’s Truth BBQ to open Houston location
Johnny Carrabba is an investor in the venture.

I read the Chronicle article and Johnny Carrabba felt that some critics will see this as a corporate takeover. He’ll be in the place as I’ve seen him virtually every time I go to Carrabba’s Kirby, tasting sauces and talking to the cooks.

Dropped by Truth on my way to Houston yesterday. Arrived about an hour before opening since I just assume hour+ waits are the norm and I ended up being first in line for at least 20 minutes. By opening, there was a solid 3+ dozen deep line behind me.

Every part of the experience was outstanding. Picked up a 1/4 lb each of fatty brisket, pork ribs, and beef/garlic sausage. The brisket is no doubt on the same level as the upper echelon of bbq like J. Leonardi’s, Franklin, or Snow’s. Pork ribs had a nice pull off the bone (thankfully did not just slip off as Bruce mentioned). I consider Snow’s to do the best sausage and Truth’s beef-pork combo is a strong contender; packed full of smoke, course grind, and bursting bites through the casing. Also had collard greens and I liked that the stems had a soft bite, while tomatoes gave it some acidity and a bit of savory saltiness from bits of bacon. Glad I didn’t opt for a 3 meat plate since I couldn’t have finished a second side.

Throughout the meal, I was wishing I didn’t do this alone since it would’ve been great to try everything else: the other meats (turkey/pulled pork) and all the other sides looked great. Do not miss the cakes too. Moist and fluffy texture, while the icing decadent without being overwhelmingly sweet. I could see Truth hitting the top 5, if not taking the top spot of the TX monthly rankings. The overall experience was on another level compared to most other bbq destinations.

Glad you had a good experience. Sounds like he may be improving his craft.

I’m looking forward to the Houston location, hoping it doesn’t lose anything on the original, what with all the Houston regs on smoke emissions.

Welcome to the board, by the way. Hope you can bring along some others from Austin.