Tropical Hut Express is a Filipino BBQ lunch spot found on Route 35 in Hazlet, in the plaza with Tim Horton’s is. A restaurant has been open in this space since last year, but has recently changed up their menu and changed their name/ownership (?) from Island Baked Goods to this current iteration.

I’m uncertain as to whether Tropical Hut Express, House of Filipino BBQ, bears any connection to the chain of Tropical Huts, but I’m guessing it does not. In the past, I stopped by to try their empanadas and BBQ skewers, and they promised soon they would be adding more traditional dishes.

It’s a very small location, with a few tables, but probably best for take-out. It also appears to be primarily a lunch/early dinner type of place.

On display is a selection of empanadas in the warmer, lechon, longaniza, and some take-away desserts. Their chicken adobo was very good, with a nicely spiced rich, savory sauce.

The prices are very affordable, with most dishes running around $5-6. They even have a large sampler platter that feeds 4-6 people for $50 as well.

I look forward to coming back for their lumpia, tamarind chicken, and several other options on their menu.’ 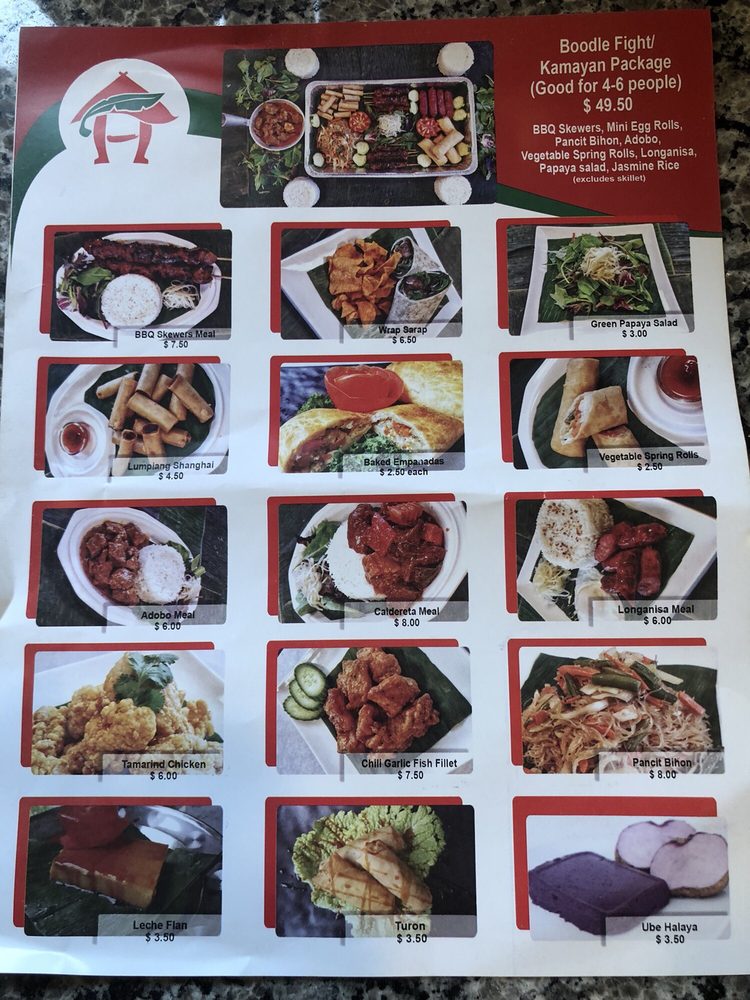 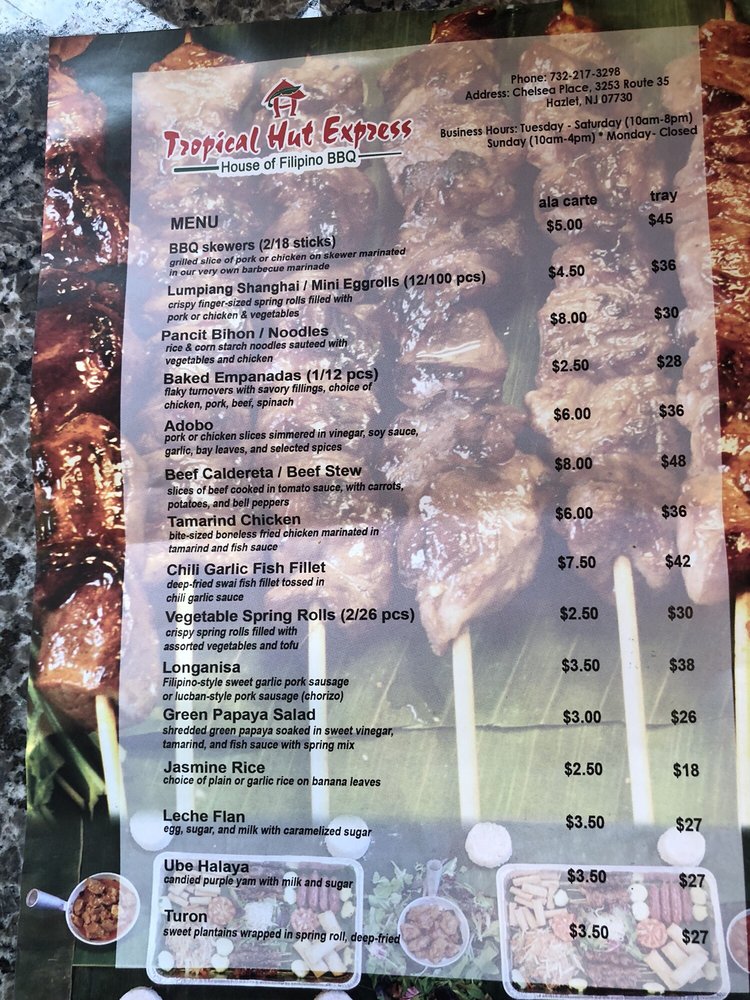 Great report. I have some past experience with Filipino food (my ex was half-Fil), and have always wondered why it was not more popular. I am familiar with Island Baked Goods, though I never went there.

This menu looks fantastic and the prices are great. Not to be a bummer, but there is not much of a Filipino population in the Hazlet/surrounding area and average Americans, in my experience, have been unwilling to try it. I wish them luck but what an awful location to be in. I hope to give it a try before they are gone. That plaza, with the exception of the bagel place, has been a bit of a graveyard and kiss of death for some businesses. Not even Dunkin’ survived there.

Had a takeout from there couple of times. Thoroughly enjoyed epanadas and BBQ skewers

Thanks for the heads up. I will have to give this a shot. Was the Adobo all dark meat or a mix?

Greg, I told John about this. He said next week he wants to go. I’ll see if you’re around.

Before Island Baked Goods they were a full menu restaurant identical to what you are describing. Small but loyal following including my son who was in HS at the time. The owner started catering pig roasts on the side, then closed completely then came the baked goods. The menu was always fresh, solid comforting food at an incredible price. The menu you posted seems like only a $1 higher than 11 yrs ago. That’s incredible.

The owner said at the time her customers hailed from middlesex and monmouth hospitals; workers who picked up called in orders.

We will def check out the new setup.

The pricing does look very fair. I wonder why they are only open until 8 PM?

I see the flan but no egg custard mini pies…those pies at the baked goods shop were always a hit with my gang.

There is a Filipino spot down near you Evie. Have you been? It’s in Neptune

I love Filipino food but I was unaware of this place. It’s outside my usual area of travel but I want to try it. The Boodle Fight/Kamayan (Kamayan means eat with your hands) for 4 people looks worth trying but it’s far from a real Boodle Fight as seen below. 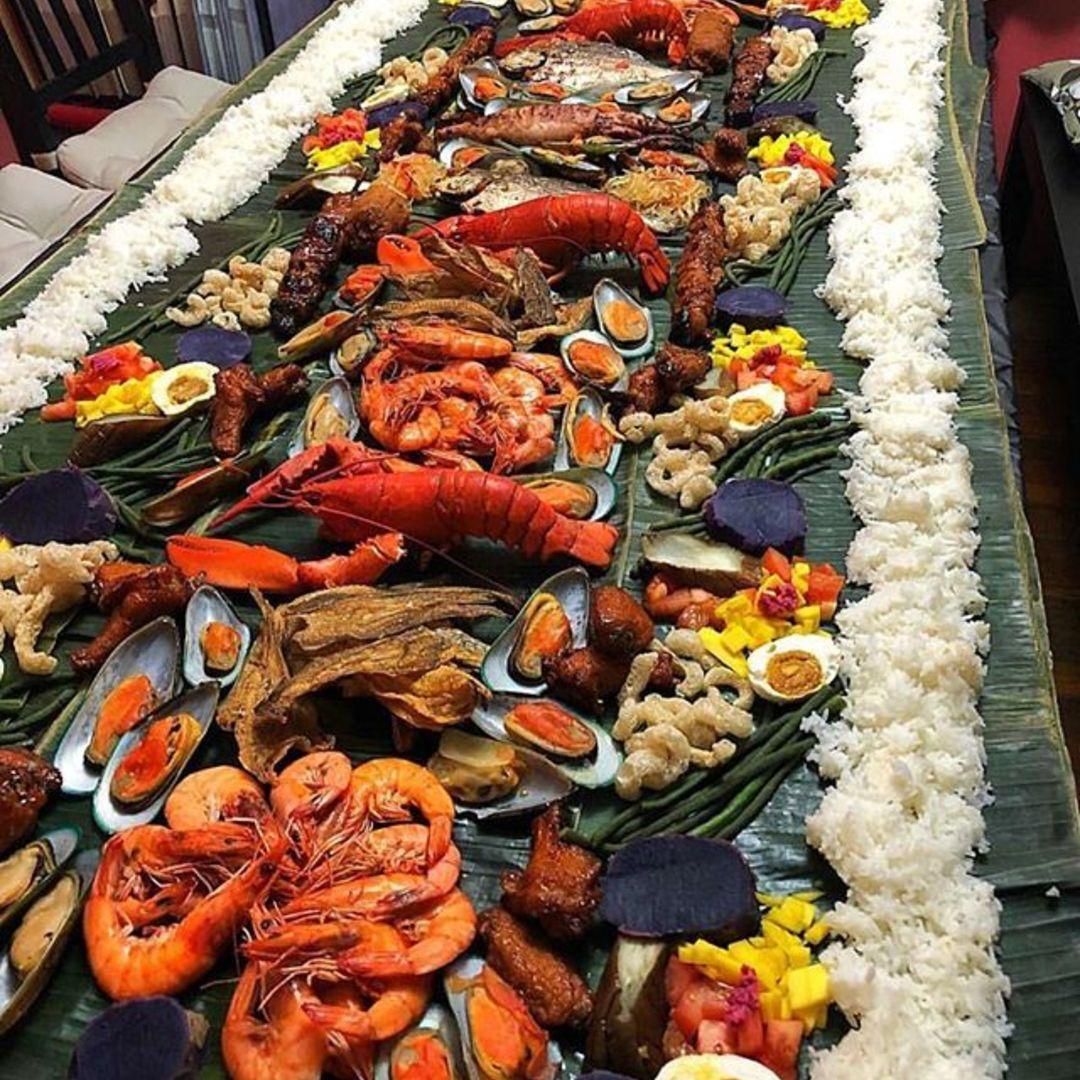 But after JR polishes that off what is everyone else supposed to eat?
In all seriousness that looks incredible

Anyone remember the Filipino restaurant further down Hwy 35 northbound? Closer to Red Bank border. The interior was decorated like a home living room setup. Food was prepared at time of order so you could go thru a bottle of vino before dinner arrived but their leaf wrapped bundles were incredible. Name of the place escapes me.

That was in the same parking lot as Trezzas liquors.

Jeff that looks wild! Where is that from? I’m in my car now waiting to go

If you need any company I am game next week to try it. My cousin John said he wants to try it too so I’ll be around. Maybe we can get Greg to come. It is his home turf. I want to try just about every dish but I’m not sure about the Asian catfish. I hear some things about that farm raised species.

Are you referring to the catfish or the Filipino place? I had a few brews so bear with me lol

It’s across the street from the hospital on Corliss (SP?), In the strip mall.
They have a few entrees each day, cafeteria style.
I haven’t been in a while, I’ve always enjoyed anything I’ve gotten from there

I looked at the photos before reading your post and then was so sad this isn’t from there!

So I finally got here. I was in the area so I stopped by.

It is a super small “hole in the wall” spot with 2 tables (4 seats each, which may have been mentioned.)

I got tamarind chicken since they were out of adobo chicken and also 2 of the bbq chicken on a stick. My friend got Pancit and a beef empanada. She said it was good…“sweet and tangy” she told me.

The chicken was deep fried cubes of dark meat also with a tangy flavor (apparently there is both tamarind and fish sauce used in the marinade.) The first piece tasted a little strange since I didnt expect the tangy taste. After that I started hammering the cubes down. I’d take the chick Fil A cubes over these any day

I have the chicken skewers in my fridge. I will take a pic tomorrow.

This place reminds me of a chinese and thai place mixed together…with Chinese takeout prices. Overall it wasn’t mind blowing, but it was cheap and something new. I had a bite of the chicken stick and it is pretty good. It was 2 for 5. They are much bigger than the ones you get at the chinese joints that serve pupu platters.

I want to get back to try the chicken adobo. 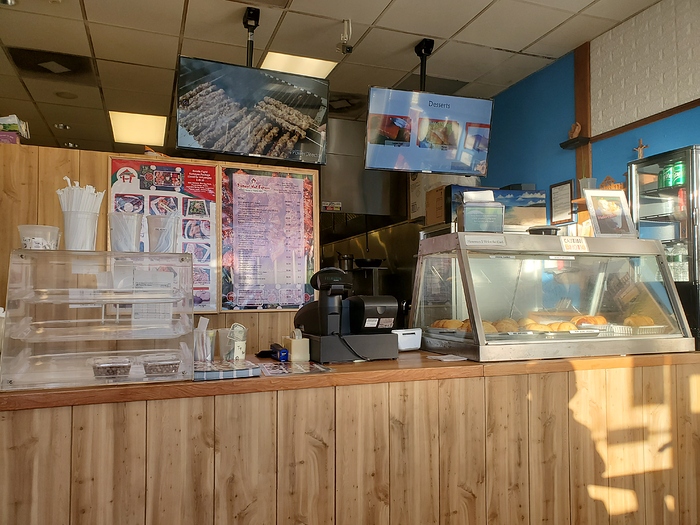 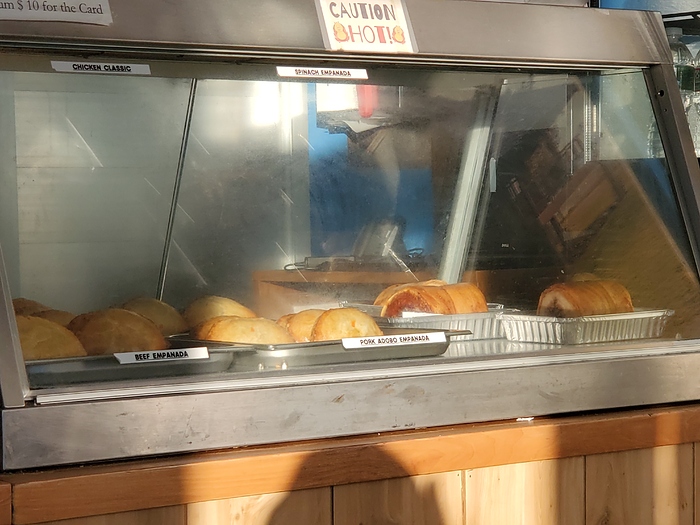 Here are the chicken sticks. I forget what the proper name is for them on the menu. The one is smaller because I had a few bites 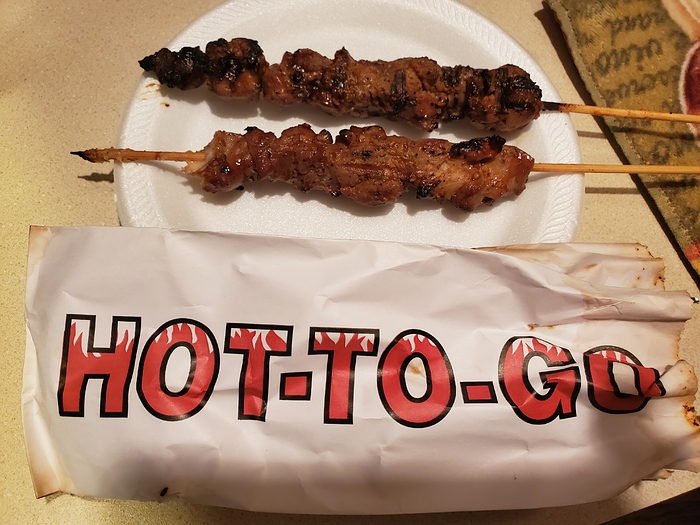