I’ll get right into it.

Or as I now refer to them,

BEIGNETS!!!
The orgasmic offspring of a Carnival Fried Dough dad and a Croissant mom.

Ok, now that that’s settled, where to get them? The obvious choice is Cafe Du Monde. When we walked by the French Quarter location it was jam packed, with long lines to get a table or takeout. So we kept on walking, just a little bit further to the French Market, where we quickly found Loretta’s. We quickly ordered and in just seven quick minutes (they inform you of the wait time), we were seated at a nearby table and enjoying these piping hot powder-drenched treats. Soooo good! Soooo good! I read somewhere the beignets at Loretta’s won a contest of some sort. No matter… just get them there and enjoy them. They come traditional (plain) or with flavors. We got plain. My husband Jerry got powdered sugar all over his shirt, pants and shoes, so bring wipes. Well worth it. 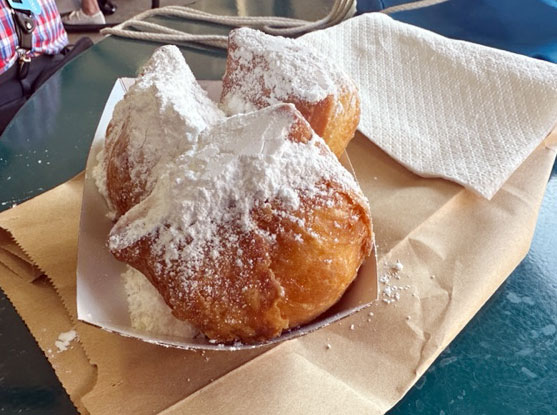 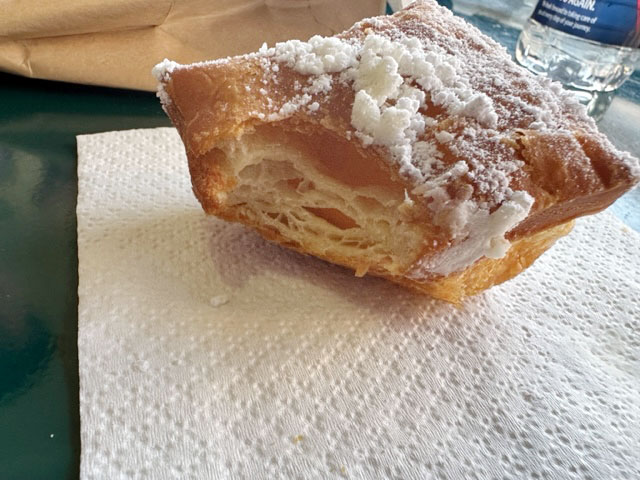 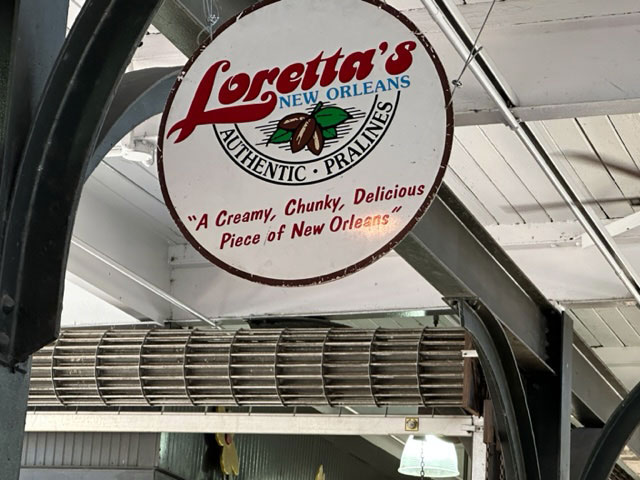 Staying at the Hotel Provincial we had a number of breakfast options in the area. We tried two - Croissant D’or and French Toast. Croissant D’or looked great, like a cute little patisserie, but the food did not live up to the hype. Probably the time I have spent in Paris has spoiled me somewhat, but croissants that have the texture of rolls are just not good enough for me to waste calories on. Jerry got an order of French toast and there was nothing special about the bread. So, overall, I am thinking meh… but then I decided to use the ladies room and YIKES! It was the most dirty and disgusting bathroom I have seen, and I have been in porta potties… at carnivals… on hot August days… We left quickly after eating, never to return. 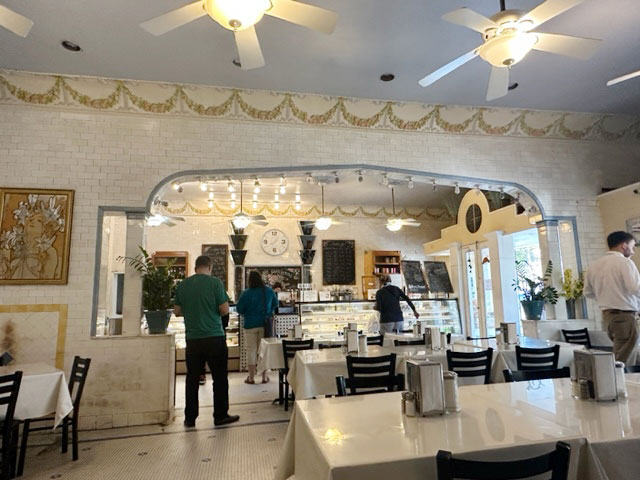 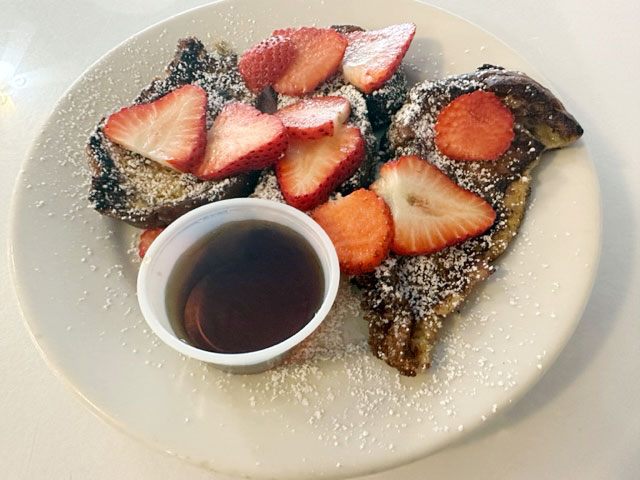 On the other hand, French Toast at 1035 Decatur Street, was a delight for breakfast. The place opens promptly at 8 a.m. and it is best to get there around then if possible as it fills up quickly. They have a large menu including egg dishes, waffles, crepes, round Abelskivers pancakes, and of course, French toast, all kinds of stuffed French toast. We opted for Chicken and Waffles which is one of their non-French toast specialties, and a basic eggs, toast and bacon dish. Both were very good. The chicken with the waffles was boneless breast meat with a delicious coating and served piping hot and juicy. The star for me though was the cayenne butter served with it. A compound butter... if I were to guess I would say it had either honey or powdered sugar mixed in as well as a sprinkling of cayenne. The butter had a creamy and sweetish mouthfeel and was not overly spicy. Perfectly good with the chicken and the waffles. I wish I asked them the components. Loved it! 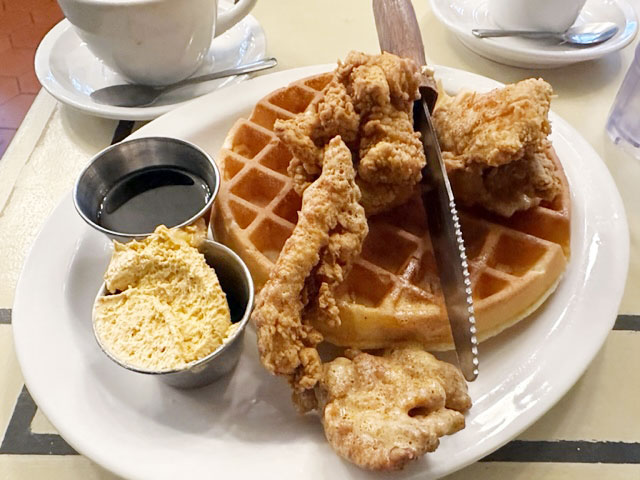 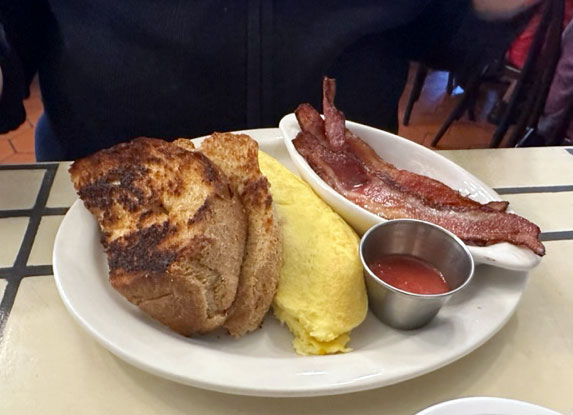 Another place we enjoyed fried chicken was at Coop’s Place, which is next to Saint John’s. We went for an early supper, which was a good idea, because when we left there was a line to get in. Since we don’t eat seafood, we decided to share a three-piece fried chicken plate which came with a scoop of coleslaw and a scoop of rabbit and sausage jambalaya. The chicken was delicious, flavorful coating on it and fried beautifully. However, the pieces were just a tad dry, like they had been hanging out under a heat lamp for awhile. Nevertheless, we devoured it all. We also liked the jambalaya. It wasn’t quite on the same level as Royal House, but I would love to have it again anytime. A table of women next to us who were just about to leave when we arrived sang the praises of a seafood pasta dish they had. So that’s something to consider as well. I was warned that his place cards everyone to make sure they are over 18. And indeed they did. Even us old bats. 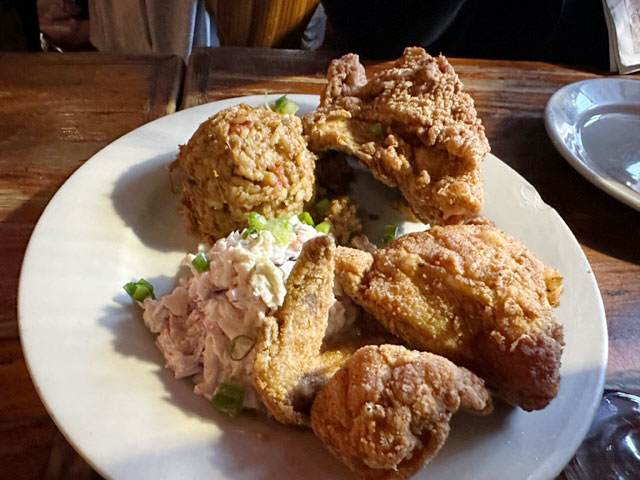 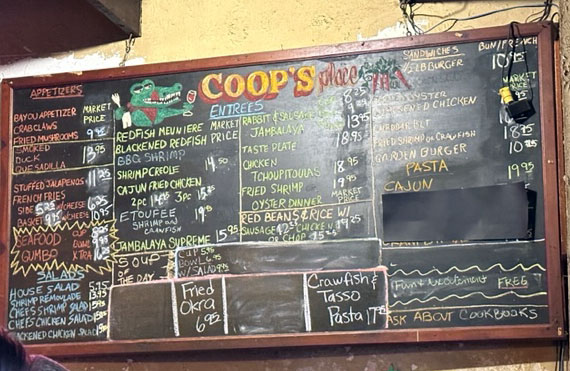 The final three places in this report are not worth going out of your way for foodwise, but we were glad to experience them.

We took the Steamboat Natchez Jazz Brunch Cruise and it was fun sailing along the Mississippi with a Dixeland Trio playing. The brunch was mediocre, typical group fare. Even a little worse because the French toast and O’Brien potatoes were cold and the little foiled wrapped butter squares were ice cold making it impossible to use them. Jerry liked the gumbo. I don’t think he met a gumbo he didn’t like, or jambalaya for that matter. The Bananas Foster for dessert was delicious, so I was good with that. My advice, save your money, do the cruise, bring snacks and have drinks from the boat’s bar. 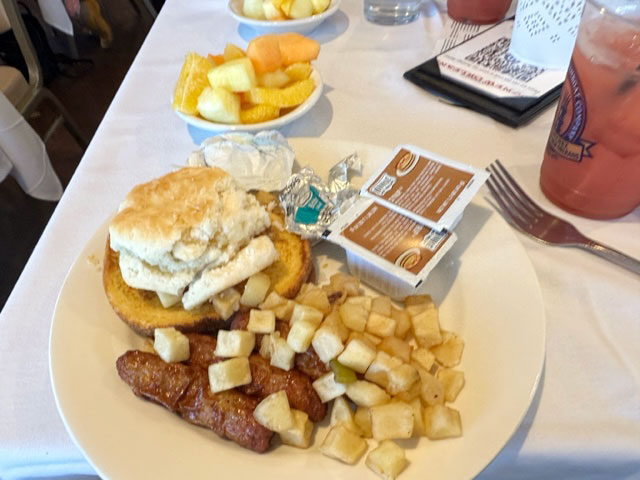 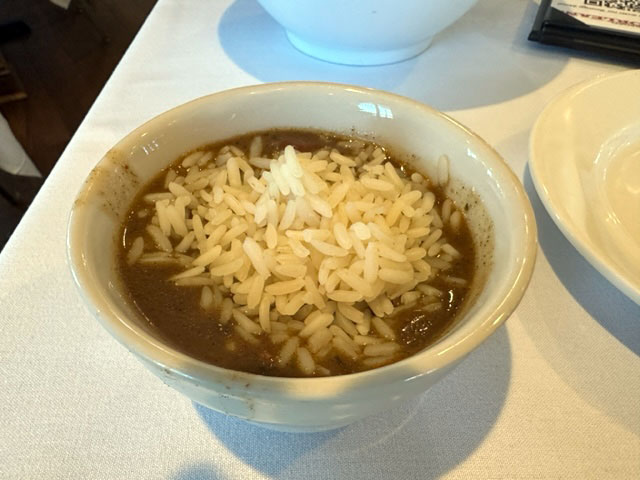 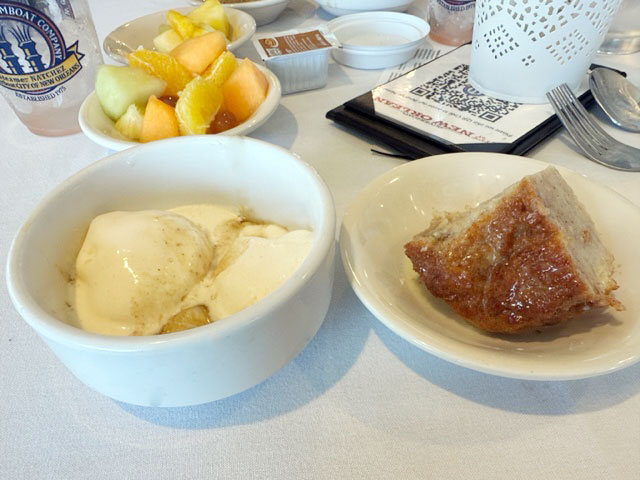 I love jazz and a friend advised us to check out the acts at the Snug Harbor Jazz Bistro on Frenchmen Street. “If you like it, book it, the place sells out quickly,” he said. So, I made a reservation online to see a group in the bistro’s Music Room (Herlin Riley - phenomenal). They also serve dinner separately, and I decided it would be easy to just have dinner there before the show. Yes, it was easy. But the food was so mediocre that I wish we grabbed a sandwich elsewhere instead. It may have been that Snug Harbor’s menu was more seafood-centric and the non-seafood dishes were throwaways. A hamburger was just fine, a ribeye steak was more like a breakfast minute steak. 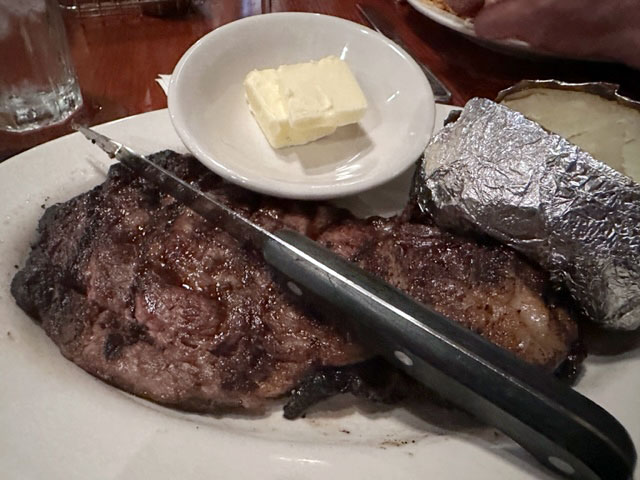 Finally, the main reason for this visit was to visit the National WWII Museum on Veteran’s Day, and what a terrific experience. NOLA should be so proud of this museum, it’s full of great exhibits and a stirring 4D film experience, Beyond All Boundaries. Our original plan was to visit the museum in the morning and have lunch at nearby Cochon Butcher. But we got so caught up in the D Day exhibit and talking with Veterans (my favorite is pictured below). So we decided to grab a quick bite at the onsite soda shop. Jerry liked a cup of gumbo… and I liked my BLT. Overall, we really loved New Orleans, and can’t wait to visit again. 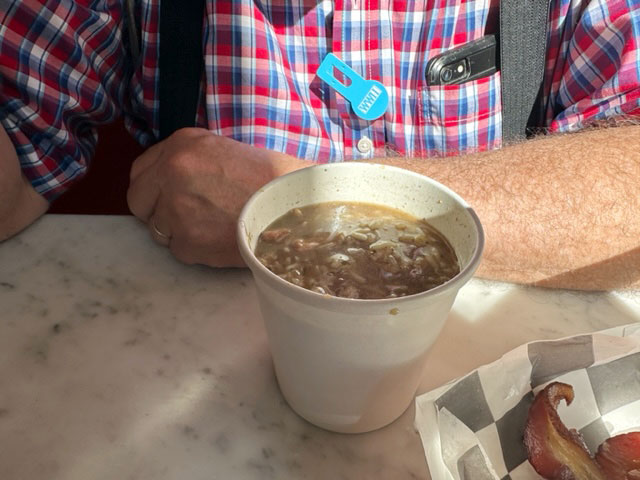 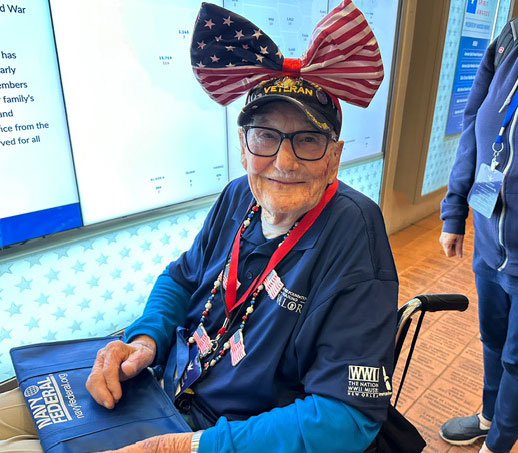 bullseye!!! My favorite spot to enjoy music that’s not Tips - but yeah i stick to the cocktails.

Who did you listen to?

Interesting you should ask Red Dog. We were supposed to see Jazz trumpeter Bria Skongberg and her quartet. Bria was in town to record an album and this was supposed to be a final warm up before recording. However, Bria came down with COVID the day before and had to cancel. Her drummer, Herlin Riley, quickly put together a quartet and filled in. The group brought down the house! Herlin waltzed in playing a mean tambourine and was a ball of Jazz energy. The musicians he brought were outstanding. The joint was jumpin’ and then some! Hope Bria is feeling better, but boy did we get one good show!

Looking at Snug Harbor’s calendar, I see they have added the Herlin Riley Quartet to their calendar for Nov. 26. If you can, GO!

One other note: The morning after Snug Harbor, it was raining, so we decided to visit the Jazz Museum. Loved the jazz videos, fun to watch, especially Louis Prima’s. What can I say, I think he is big, bold fun.

I heard music coming from another video while walking into another room and the vocalist sounded really familiar. It was a classic old jazz dance number sung by none other than Herlin Riley! I soon learned that Herlin, who comes from New Orleans, is a very celebrated musician. No wonder he was so good the night before. I’m now a Herlin Riley fan.

My husband Jerry got powdered sugar all over his shirt, pants and shoes, so bring wipes. Well worth it.

It’s not an authentic beignet experience unless you end up covered with powdered sugar!
Thanks so much for these posts. I’m not from New Orleans, but reading these made me feel homesick.

No shortage of talent in that city.

I wish I could click my heels and be there tonite for Charmaine Neville!

Well we had a very authentic (and really good) experience then!

Count me in as a new fan of New Orleans. Already planning a second trip for next year.

I always make the mistake of accidentally inhaling some of the copious powdered sugar and coughing. Lessons never learned. Like that last drink at 4 am !

You are so right about the talent. I’d be going to Frenchmen Street every week if I lived there.

Or that third Hurricane at Pat O’Brien’s!

I like Pat O’Brien’s but tend to avoid Bourbon St for the most part - but make no mistake definitely steer completely clear of the Jester!

A “blend of our secret premium ingredients that include Strawberry Kiwi, Everclear & 151 Dark Rum” – what could possibly go wrong? 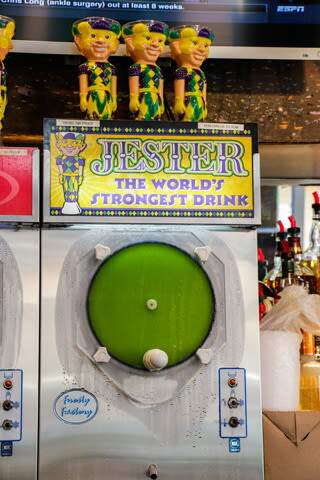 A “blend of our secret premium ingredients that include Strawberry Kiwi, Everclear & 151 Dark Rum” – what could possibly go wrong?

My husband kept saying he wanted a hand grenade. Took me a while to figure out that was a drink.

I think the piles of vomit along that area tell you exactly what.

Pro tip re: getting into Cafe du Monde: go around the back side and just walk right in. There are always plenty of open tables and that line is just for people who don’t know that you can walk around the back.