Took a last-minute weekend jaunt up north this past weekend. We stayed at the beach (Pine Point Beach, which was new-to-us…big, gorgeous beach) and had glorious fall weather. And we were obviously prepping for a marathon, given all the carbo-loading we did.

Friday
Had a late-ish lunch at Nonesuch River Brewery. My caprese sandwich was ok (I had asked the waitress about tomato quality and she said they were still good, but I should’ve known better). B devoured his fried chicken sandwich and spring onion enjoyed his “dinosaur” chicken (I don’t even remember why we started calling it that…I suppose an attempt to make chicken tenders sound more interesting to him). Cool, chill space and nice beers.

Dinner was pizza at Otto in Saco (the only decent-sounding pizza that was relatively close by). We had a fail when we thought Garage BBQ was open, walked to it from our rental. We were close to hangry territory. Sad, because we have tons of Ottos in GBA, including one right down the street, on Mass Ave. Oh well. Pretty good but floppy mushroom and cauliflower pizza. Felt somehow disorganized in there (maybe due to big pre-movie rush that had just wrapped up - it is attached to a theater).

Saturday
Breakfast at rental then an early lunch at Slab…yes, pizza again. But we had been looking forward to Slab all week. Ridiculously pillowy slabs all around (vegan tomato pesto for me, the “sfinch” for B, cheese for spring onion). Smooth primitivo to accompany. We had some fun afterwards out on the patio, playing with the giant jenga blocks. (Why can’t Boston restaurants be more fun?)

Dinner at Ken’s Seafood Place in Scarborough was a bit disappointing for me. The fried clams had a thick batter that I didn’t care for, although the full-bellied clams themselves were realyl sweet and delicious. B liked his lobster roll well enough, especially for the price (something south of $15, I think). And spring onion actually ate his entire hot dog, plus a raspberry-flavored lobster lollipop. The biggest bummer for me was the amount of disposable/unrecyclable plastic that comes with every meal. Everything comes out in mostly styrofoam containers (except for the box of fried clams) and heavy, plastic utensils. It was quite depressing for me, especially when you consider that this was one evening during the off-season (Ken’s is set to close for the season this coming weekend). Multiply that by the previous months of meals…man, that adds up to a mountain of garbage.

Sunday
Chilly, blustery day. We headed to Biddeford because I wanted to see if Rabelais Bookshop might be open (it wasn’t). We drove around town a bit to see what had changed since our last visit a few years ago. We spotted Rover Wood-Fired Bagels and Pizza. And, thankfully, stopped. We wanted one of everything but settled for everything bagels and roasted onion bialys. We didn’t try them until that evening and dang, they were GOOD. We got the chili garlic cream cheese which was a nice spread.

Instead of heading to Anju in Kittery, we thought it best to eat in town, and we were happy to go to Run of the Mill just across the river in Saco. I had a lobster roll as one last grasp at a summery meal, B went with a salmon focaccia open-faced sandwich, while spring onion enjoyed yet another hot dog. We love that place - we’d be there on a weekly basis if we lived nearby. And now we have another reason to return - to replenish our bagel supply (we are hoarding the last 3 in the freezer). 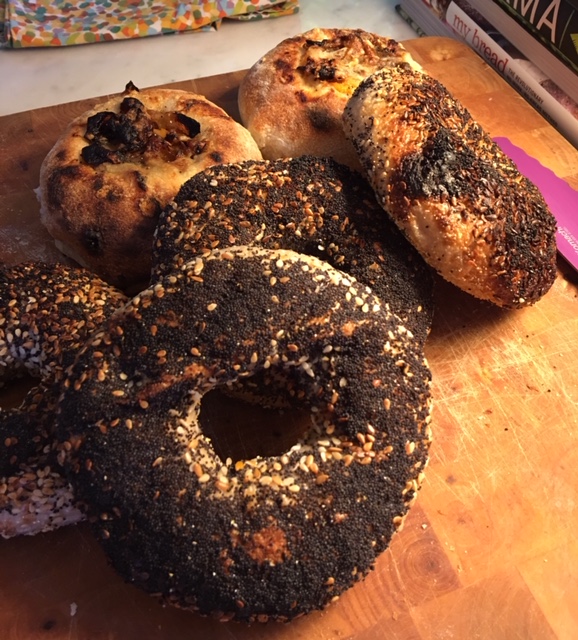 Nice trip report @digga. You know how I love exploring that part of Maine—so much to discover. Thanks for sharing with us!

Awesome report, thanks for taking the time!

Thanks. Glad to hear I am not the only one for whom a pile of styrofoam can completely wreck a meal. It’s like how can they be right near the beach and not see the piles of plastic and styrofoam accumulating and washing in with each tide?

Thanks. Glad to hear I am not the only one for whom a pile of styrofoam can completely wreck a meal. It’s like how can they be right near the beach and not see the piles of plastic and styrofoam accumulating and washing in with each tide?

I get a very similar feeling when I go into my office in Downtown Crossing and go to lunch with colleagues and see mountains of “compostibles” in the trash.