Pardon the VERY late trip report. We traveled to the great Southwest right as the pandemic was hitting (late Feb- early March). We managed to make it home to Boston after a superb trip in terms of food and sights. Can’t wait for this dang thing to go away so we can go back for more exploration. I did take notes so I’ll try to cobble this thing together.

First of all, we noticed immediately the friendliness of everyone at the airport, from the airport shuttle folks, to the rental car workers. Definitely not in Boston anymore. We crashed at some motel near the airport for our first night. Even though we were staying very close to Pizzeria Bianco, we were eager to hit the road and didn’t want to wait until lunchtime to start our road trip. Our first meal was at Verde Brewing Co. It didn’t look promising when we pulled up, as it’s in a rather bleak-looking industrial area, but inside, we found a cute little space and warm, welcoming staff. And kick-butt food in huge portions. Elote bowl, veggie sandwich, chili, nachos, hot dog for Spring Onion (SO), wildflower IPA - it was all delicious. Then onward to our tiny house in Cottonwood. 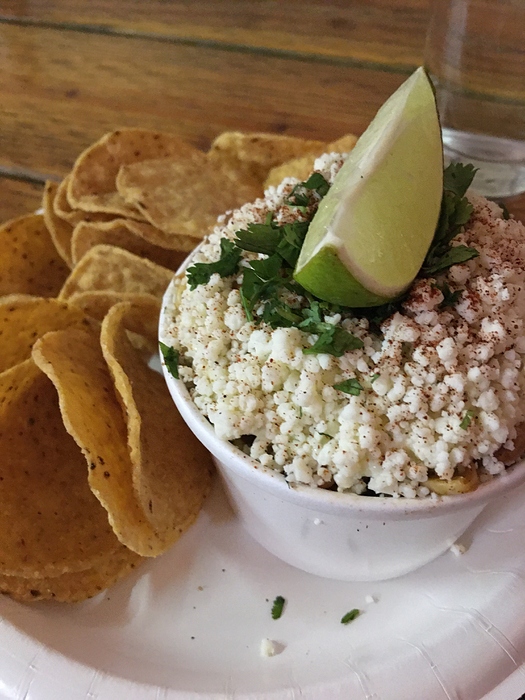 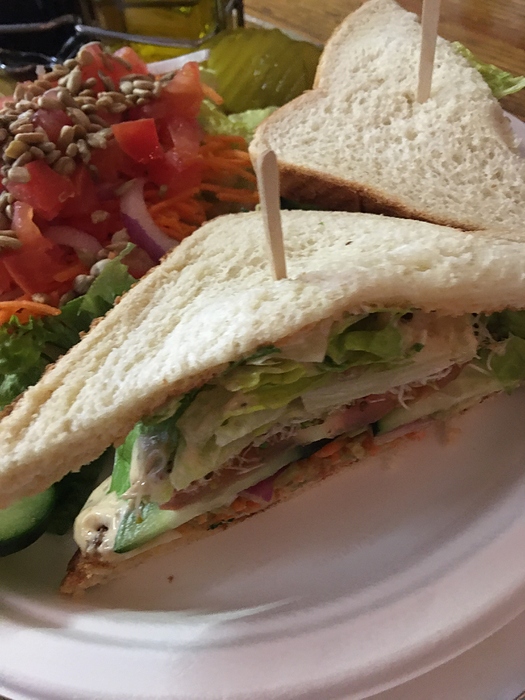 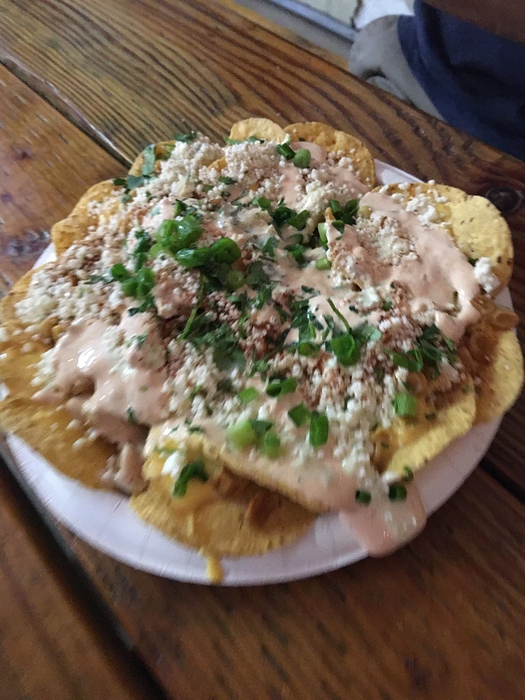 After a day of checking out Jerome, we wandered aimlessly around Old Cottonwood, we chose Colt Grill. Very bustling and a messed-up ordering system, where everyone orders at a counter next to the bar and them seats themselves. A big scrum at the ordering counter but we managed to snag a nice table on the covered patio, which is heated with propane heaters. Mahi (what can I say, I was craving fish in the middle of the desert) and brisket tacos were on good doubled-up corn tortillas and a HUGE chicken strip dinner for SO. 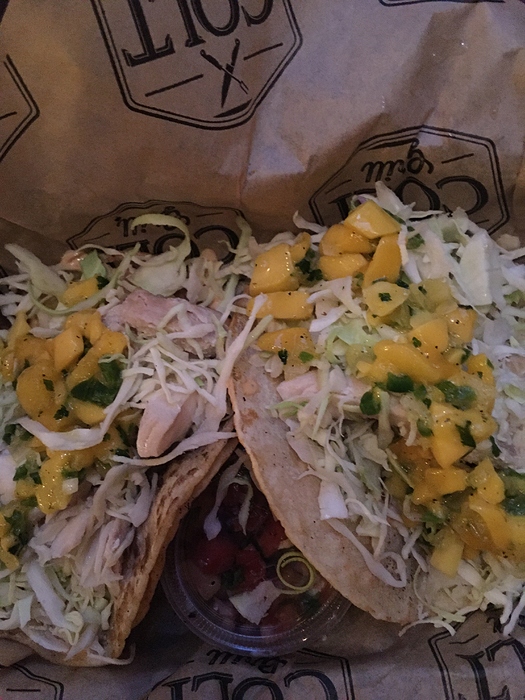 We had one awesome picnic lunch of homemade sandwiches and cold brown-bagged beer with Cathedral Rock as a backdrop. On to Flagstaff, where we stayed in an awesome Airbnb house. SO and I start suffering what we think are some altitude effects so for a couple of days. We checked out Lowell Observatory, which was great and Meteor Crater, which was WINDY and fun. We try the Lumberyard which was just ok pub food. My notes are spotty due to not feeling well, but I think we mostly ate in (the house had a very well-stocked kitchen). Next stop is the South Rim Grand Canyon.

Due to the pandemic, which was affecting travel, we have the park pretty much to ourselves. Crazy as it sounds, it was blissful to not have to fight crowds. SO was over the moon at exploring the canyon and the park (as were B and I - our first time there!). We had 1 meal at the pizza pub at Maswik Lodge. Definitely not good pizza, but it was nice to take a load off, have an adult beverage and the staff was friendly. We have one meal at Yavapai Tavern, which is a pleasant spot inside the park. Beef nachos for B, veggie chili soup for me. B is happy - can’t beat nachos, cold beer, and 80’s music! We have 1 dinner at our hotel Grand Hotel Tusayan which was good but the huge dining room was kinda depressingly empty. We felt bad for the musician who was basically playing his banjo to crickets. I think there some steak involved and I can’t remember what else.
My notes start getting a bit sparse at this point…

On our way to Zion, we stop at Cameron Trading Post for veggie bean chili and a huge piece of fry bread. 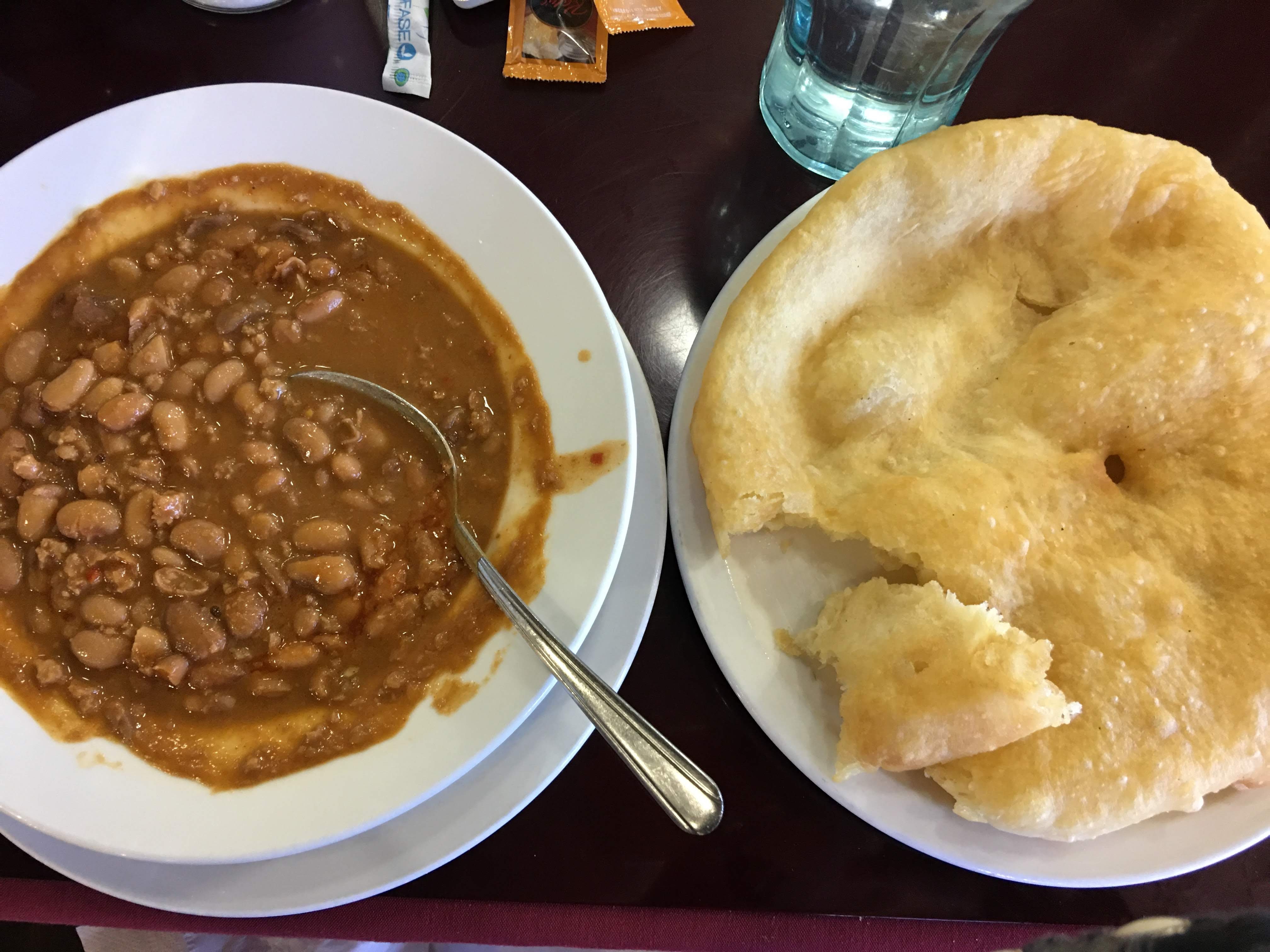 We made one stop in Page to see Antelope Canyon and stayed in a motel nearby. A hotel room dinner of ramen for me and SO and Paco’s Tacos.

We stay at a cute little place, Red Rock Inn. At first we were sad to be so close to the road, but nearly all of the lodging that is close to the park entrance is right on the main drag. In a normal year, with tons of traffic, I think the road noise would be unbearable but it wasn’t too bad when we were there. Our first dinner was at Bit & Spur, which was a fun spot. Beef burrito, awesome tofu tacos, chips/guac/salsa, pizza, and margaritas that went down way too easily. 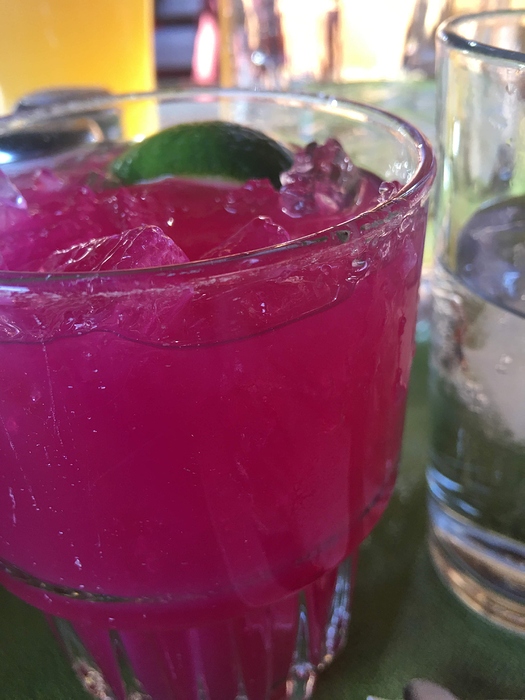 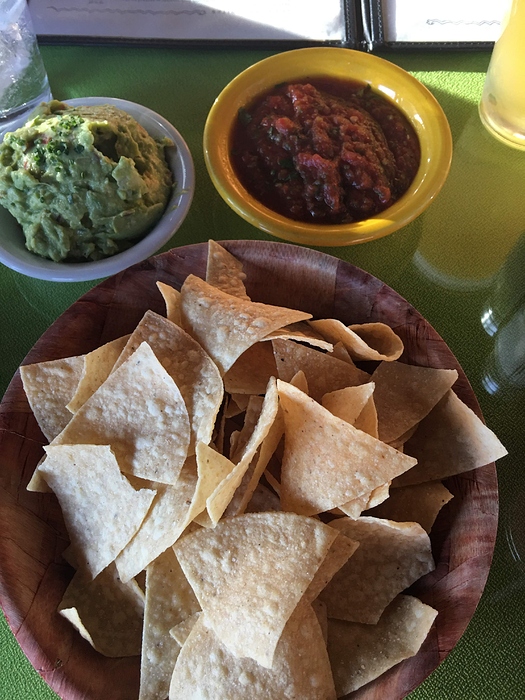 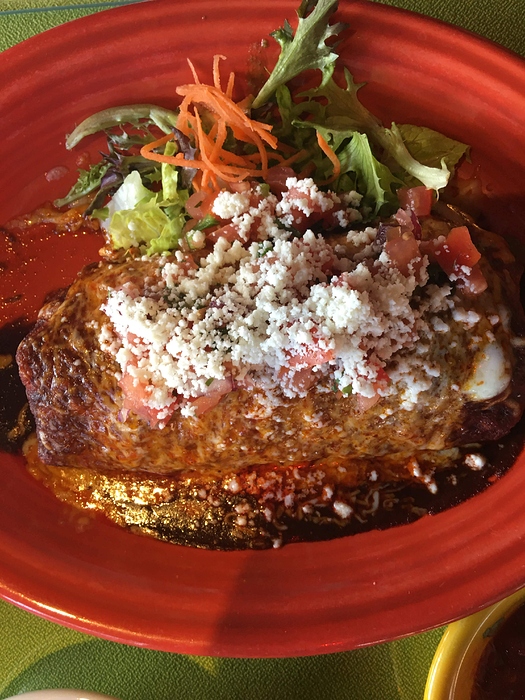 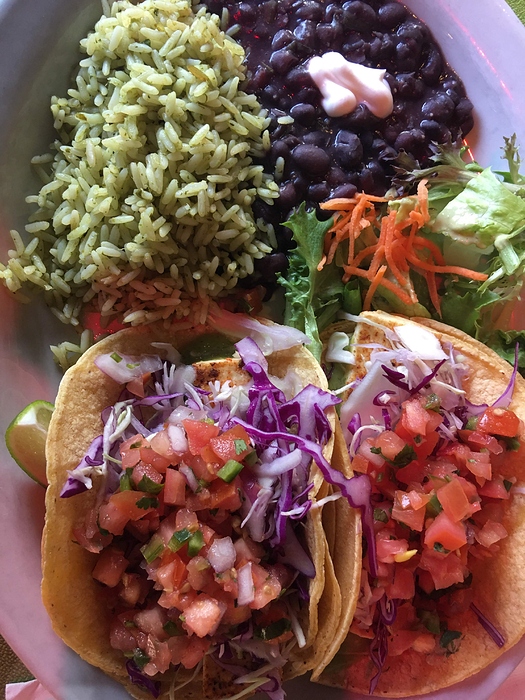 The Inn doesn’t do breakfasts onsite but instead offers vouchers for a couple of local places. We chose Oscar’s and man, was it good. Now, I am normally a pescatarian so when I told B that I was going to order the pulled pork green chili bowl (mine without eggs), his eyes nearly popped out of his head. And he proceeded to get the same thing. And it was one of the most delicious dishes we’d had. Rich, tangy, all the flavors melded beautifully together. SO had very good pancakes. We all waddled out to check out Zion. 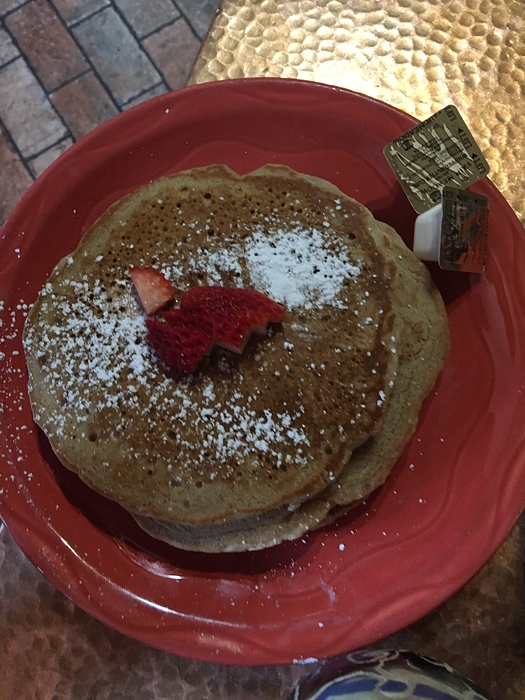 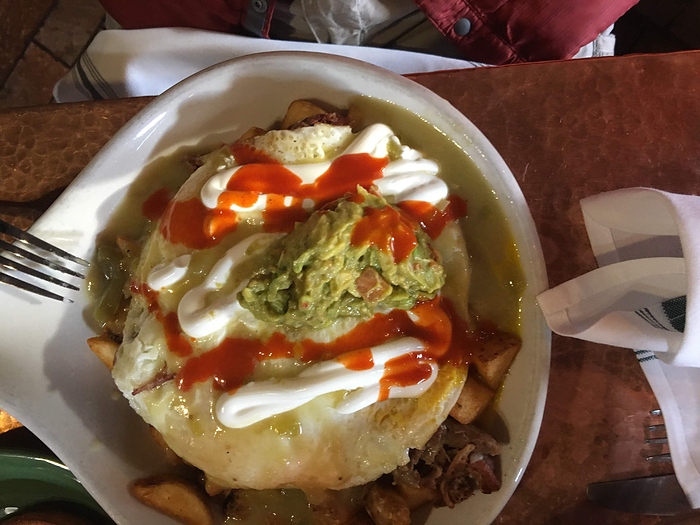 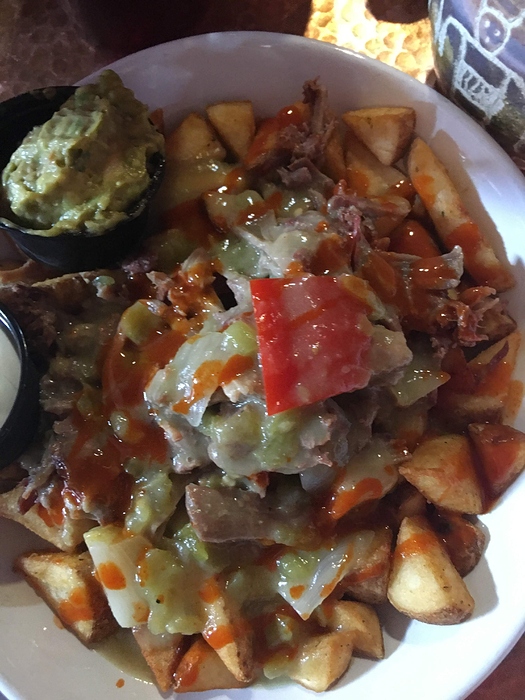 We did a repeat the following day at both Bit & Spur (no photos) and Oscar’s. I couldn’t do pork again, so I got a bean burrito, which hit the spot. 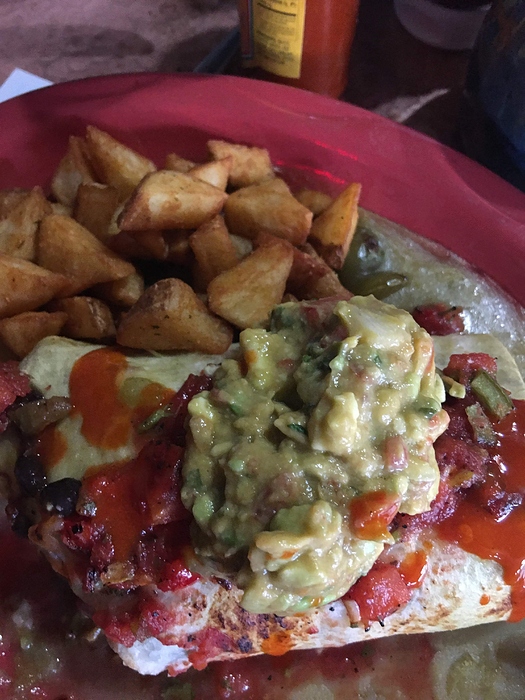 We were flying out of Las Vegas, again our first time seeing it (and we decided we didn’t need to see it again after walking around a bit). We ended up eating at the airport Shake Shack since SO loves their hot dogs and milkshakes. I think that’s kind of a wrap! My notes (and my memory) stop right there.

This is great. Thanks so much for putting it together.

Your trip reports are always such a treat! Sounds like a lot of good scenery, good food and great memories.

I just remembered we had one lovely lunch inside Zion at Zion Lodge. We love the architecture and sat at a table out side. Honestly the food was not memorable (I got the veggie soup and salad buffet and I can’t remember what the guys had) but I can’t think of a better outdoor dining experience. The views are stunning and it was very chill. Decent and cold beer on offer.

Terrific report with great photos, too.

Fry bread! Anything with green chiles! Two of my favorite reasons to visit the Southwest.

Re Cameron Trading Post: If you are not avoiding meat, the Navajo Taco is the dish to get (and split with someone). And my mother-in-law thought their potato salad was the best she had ever had. (This was in 2007; I concede that things may have changed since then.)

I love Jerome. Actually love all the mountains of Az.
We tired of living in Scottsdale and the Valley of the Sun

by the time we hit our mid 30s. Oregon was calling our names.
I wanna be a snowbird now that I’m in my 60’s!