I agree that the super-thin potatoes made the dish. That’s probably impossible for Toni and me to replicate at home. As you can see from the photos in the recipe that Dave found, the potatoes in that recipe are sliced much more thickly, which might be doable for an amateur home cook.

That’s quite the list! I am jealous of your opportunity to do this. For the places you listed as outstanding, what did you order?
(I already know what you had at Dong Bei Da Pai Dang)

Hometown Bar-B-Que - We got their fatty brisket, pastrami sandwich, and beef rib. (Toni also got the queso with tortilla chips and brisket, which she said was outstanding.) The collards with smoked pork were also excellent.

This is one of the very best barbecue places I’ve ever eaten in. Ever. Anywhere. It was every bit as good as Joe’s in Kansas City, City Market in Luling, Texas, Black’s in Lockhart, Texas, ZZQ in Richmond, Virginia, Lexington Barbecue #1 in Lexington, North Carolina, and Wilber’s in Goldsboro, NC. It’s also a really pleasant place to eat, with lots of tables and room to spread out. The day we were there, a really good bluegrass band was playing too.

All three meats were great, but the pastrami sandwich was the highlight. The amount of smoke the meat had absorbed was just incredible.

And before any barbecue traditionalists start telling me that it is impossible for NYC to have great barbecue, let me point out that Daniel Vaughn, the barbecue editor for the Texas Monthly, who has probably eaten more barbecue than anyone on the planet, called the meal he had here “great” and said that the brisket he had here was “better than a lot of places in Texas.” Johnny Fugitt, who ate in 300-plus barbecue places for his book on the 100 Best barbecue places in America, ranked Hometown #2 in the country. We talked to a couple from North Carolina (photographers in town for an exhibition of their work) who absolutely love Wilber’s, but love Hometown’s barbecue just as much.

So if anyone has a stereotype in your mind that all barbecue in NYC is second rate, they need to let that go.

At LaRino Pastificio, we had a very good salad and antipasti, but what made the meal outstanding was the smoked spaghetti aglio y olio with chilis and hazelnuts. The chef makes her own spaghetti and then dries it over a hickory wood fire. Barbecue spaghetti! – though very different from the famous barbecue spaghetti at the Spaghetti Shop in Memphis.

Olmsted was by far the fanciest restaurant we ate at during our NYC vacation. The highlight of that meal was the zaa’tar smoked duck breast with some kind of fruit preserves, Moroccan bread, and yogurt. It was smoked for 12 hours in a pellet smoker that was in the garden out back of the restaurant, which is where we ate. I have no idea how they managed to keep from drying it out, but it was very smoky and really good and not nearly as frou frou as some of the other dishes we had at Olmsted (like a carrot crepe with flowers, little neck clams, and sunflower seeds, which had Toni laughing out loud at how over the top it was). But even the frou frou dishes were real good.

New Asha Sri Lankan Restaurant on Staten Island has been a food critics’ favorite for a long time – Anthony Bourdain ate there way back in 2009. It turned out to be a really good choice. It isn’t much to look at. There are only three tables and you order at the counter. But the owner Viji greeted us, came over to our table, and asked both our names, introduced herself, and welcomed us to her restaurant. She guided us through the menu – which was all food we’d never had before – and was insistent that we not over-order.

So with Viji’s help we got a fish roti, which was a spicy samosa-like triangle made with mackerel, and mutton (i.e., goat) kottu roti. That is chopped roti mixed with onions, cabbage, cubed goat, ginger, garlic, and egg. It was very good. But the owner also threw in little bowls of beets, cabbage, pickled onions, daal, goat curry, rice, and a spectacular “fish gravy” – and when we asked how the fish gravy was made, she gave us both big chunks of kingfish. It was all great (well, I thought the kingfish was a little dry), but even better was the owner sitting down with us for a good 15-20 minutes talking about Sri Lankan food. Then she brought out tastes of jackfruit, just because it is so important in Sri Lankan cuisine.
We really enjoyed it, it was one of the best experiences of our New York trip. Judging from her glowing Yelp reviews, Viji is equally gracious, welcoming, and informative with many other customers. And her food is delicious.

Hometown is my neighborhood joint and I’m especially pleased you heard some good music when you were there; some extremely professional musicians of my acquaintence play there when they’re not on various world tours. So not only are you getting outstanding BBQ, you’re also getting superb entertainment! Useful for when the lines are long, which is … almost always

Yes, they were outstanding. “Bluegrass” was shorthand for a wide range of sophisticated Americana.

Right on! Do you remember what the band were called?

They had the name scrawled on a handwritten sign, but I don’t remember it. It was late afternoon on Sunday Aug. 28, if that helps. 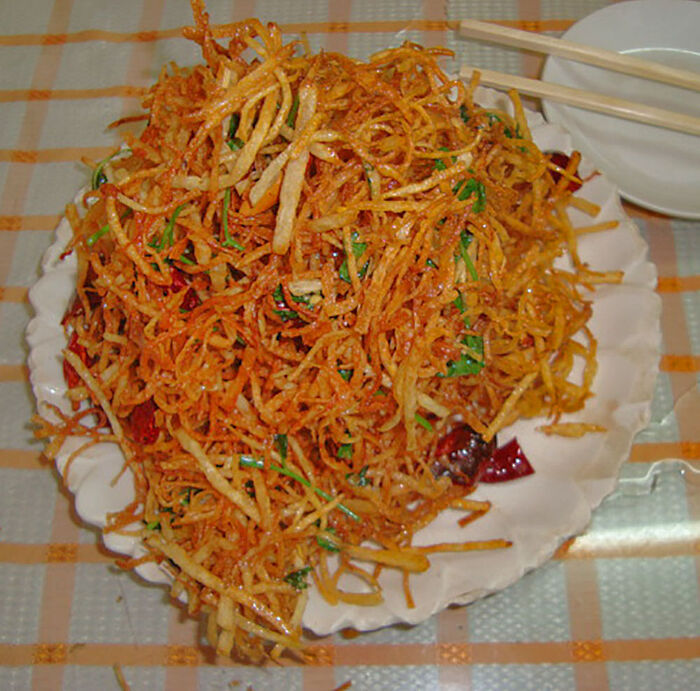 Perhaps the best potato dish I’ve ever eaten was at a hole-in-the-wall in Beijing.

Naturally, I can’t for the life of me recall the name of the dish, not to mention this was back in 2009 when I hadn’t yet started to jot down the names of meals.

I bring a small knife, ziplocs and Tupperware on food crawls, and when travelling in general.

OK, so I did a little Chinese search, and found a potential match for the dish:
https://xiangpiaowu.com/tantan/aa/do59nl.html (loosely translated, “family golden treasure tower julienne potatoes.”)

According to this recipe, the greens from the one I tried may not have been leeks, but cilantro (香菜 is cilantro).

Anyway, I’m not sure if you folks were referring to this above, or if it were the much more common julienne boiled potatoes, found in countless mainland Chinese casual establishments. They’re often served atop rice

Yes, I brought along a knife! Can share any food that way, though it doesn’t work very well on soup.

And when I stopped in five places in Brooklyn before driving home, I filled a chest with ice for the journey.

That looks wonderful. It’s always great when you can make a discovery like that. Now I am wondering what place or general location…

Sometimes when I have that experience, it’s like “Why isn’t this EVERYWHERE?”