I saw an ad for this while streaming. Apparently, you invest in a container farm in a trailer, complete with grow lights and training for you and your workmates. You drive around to your customers and deliver fresh-cut greens to their door. Interesting concept, potentially greatly decreasing carbon emissions.

My cousin in Saskatchewan has had one for around 5 years. It’s parked though. He grows lettuce inside.

You drive around to your customers and deliver fresh-cut greens to their door. Interesting concept, potentially greatly decreasing carbon emissions.

Many years ago (mid 80’s), I lived in Baltimore and a common site was horse drawn fruit and vegetable wagons. I don’t know if they still exist or not. It was fun getting fresh produce from the cart and petting the horse. 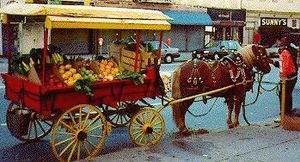 An arabber (or a-rabber) is a street vendor (hawker) selling fruits and vegetables from a colorful, horse-drawn cart. Once a common sight in American East Coast cities, only a handful of arabbers still walk the streets of Baltimore. They rely on street cries to attract the attention of their customers. The term arabber is believed to derive from the 19th century slang term "street Arabs". Arabbing began in the early 19th-century when access to ships and stables made it an accessible form of entr...

I would think the delivery model of individual items is the opposite if decreasing carbon emissions. There is far greater efficiency in delivering in quantity to a store, and people buying a basket of goods all at once.

Apparently different business models are employed. But delivering orders to homes within, say, 30 minutes of an urban center is surely less polluting than trucking lettuce 3000 miles from CA to the East Coast.