I’m travelling to Toronto for the first time ever next week and staying at a Marriott in Harbourfront/Cityplace. I’ve spent the last 2.5 years in exile from NYC, living in my hometown in Pennsylvania where there’s almost ZERO interesting cuisine. I’m a huge and adventurous foodie, so this has been hard, and this is my first trip since the pandemic. I’m looking to make up for lost time

I’ll have two evenings where I can eat anyplace I want. Willing to cab anywhere, really. Price is no object, although I won’t be bringing wardrobe for super “fine dining.” Not my cuppa, anyway, really.

Most interested in: anything flavorful and/or “different” than I’ve had access to for the past 2.5 years here in exile. Love to eat seasonally whenever possible. I don’t have firm cuisine preferences, but I do get excited about Japanese (but not exclusively sushi), Southeast Asian cuisines generally (Thai, Vietnamese), and I’m certainly interested in whatever the “native” cuisine is (provided it’s not a burger or poutine). I frequently enjoy Austrian and German restaurants in NYC, and I especially love Korean BBQ but am likely to be alone, and that’s way more interesting with others.

I’m also a big dessert hound, and so any pastry, ice cream or dessert locales would also be welcomed.

Harbourfront itself doesn’t have much. I’d describe it as equivalent to Battery Park City. The only place I have visited recently is Dynasty, in Queens Quay Terminal (a dead mall), which serves upscale dim sum.

Don Antonio in the Westin Harbour Castle Hotel is a rotating restaurant with a Michelin star located at Harbourfront . I haven’t visited since it opened, at its original location a few years ago. Of course it’s Italian- so you wouldn’t be interested- I’m just mentioning it because it’s a good restaurant located near Harbourfront.

Perhaps consider getting on the waitlist for Alo, or visit Alobar. The menus might come across as too bistro/ Continental for your taste.

Good to know!! Thanks. Alobar offers a takeout Thanksgiving meal!

I am a semi-regular customer at a couple Vietnamese coffee shops- prob not with a taxi.

Most Vietnamese restaurants located downtown are pretty good, but focused on bun, pho and banh mi, rather than broken rice platters, beef 7 ways, etc. The less common dishes and fuller service menus are found in restaurants further from the core. There’s is a year-old spot called Ca Phe Rang, with a connection to Matty Matheson, which is downtown, on Spadina near Richmond. I haven’t been yet . 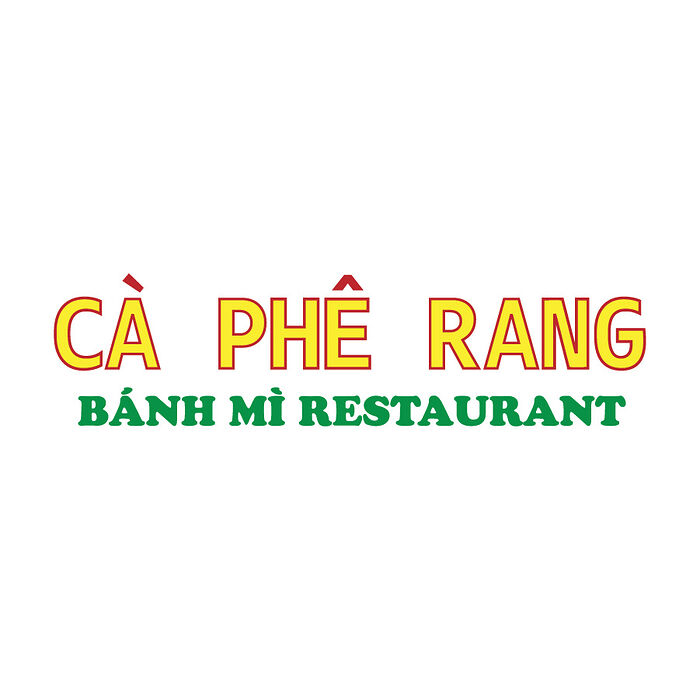 Located in Toronto at 147 Spadina Ave #109, CÀ PHÊ RANG is a Bánh Mì restaurant co-founded by Chefs Matty Matheson and Rang Nguyen. Open Wednesday through Sunday from 11AM to 9PM. No reservations

In terms of traditional Toronto and Ontario cuisines, the dishes that I associate with Toront:
Peameal bacon on a bun or peameal sandwich (St Lawrence Market has some places that sell this, and some restaurants have peameal bacon breakfast mains), the butter tart (downtown, they’re available at Bannock attached to the Bay department store on Queen, Arcadian court chicken pot pie (a typical chicken pot pie, also available at Bannock).

Soma Chocolate on King near Bathurst is with visiting if you like chocolate.

I just got off the phone with a guitar shop in “Bloor Court Village” which will be my first stop after I check in at the hotel; this appears to be adjacent to Koreatown, which is promising!

agree about Soma: well worth a visit! Pai https://paitoronto.com/ and Kiin https://www.kiintoronto.com/ are not that far from the Harbourfront and good Thai. Roselle https://www.roselleto.com/ is an amazing bakery, but a good hike from where you are. I haven’t been to richmond station https://richmondstation.ca/ for years, but a friend recently ate there and loved it. Second the Bar Alo recommendation… If you like Indonesian, Little Sister is good https://www.littlesisterto.com/ls-portland

And just thought of something else: Frenchmade. https://frenchmadetoronto.com/ Very close to Harbourfront. I have never been, but TorontoJo (formerly of CH) loves it, and she has great taste…

Shattar Abbas has a location there. Also if you like Aburi style Miku comes recommended I really enjoyed their matcha opera cake btw
Ice Creamonology has rave reviews as well I haven’t tried it yet.
You can add Don Alfonso as well while at it.
Harbor 60 for steaks
Not sure if you are willing to walk you can take the path to financial district and it will open up a lot of places.
Usual suspects mercatto, libretto etc etc are all connected not to mention all the financial district places
Yorkville isn’t that far if you are cabbing or taking transit which opens up most concentrated area for Michelin star restaurants in Toronto

Bloorcourt is my neck of the woods!

Rustle & Still, the Vietnamese coffee shop I visit the most, which has modern banh mis I like, is fairly close.

The Korean restaurant I visit most for BBQ is Arisu. There’s a Korean walnut cake bakery nearby, as well as Isabella’s mochi donuts.

I’ve mostly become a takeout and bakery person over the past 2 years, so I’ll give a shout out to the places I’ve been supporting. I’ve am someone that keeps trying new places and new things, so it says something about a place if I visit more than 3 times in a year. It’s either good or convenient

Emmer on Harbord, the sandwiches, the pastries, the breads. Think Italian, the small Italian Café across the street from Emmer. Very good focaccia, the coffees, Italian imports , wine. …

Bonne Nouvelle is a Korean-French patisserie in Little Italy on College St. https://www.bonne-nouvelle.ca/

I have a feeling Toronto is oversaturated with too many good bakeries right now, and a few more won’t make it through the winter.

Thanks for mentioning it has closed.

Some non-white-tablecloth suggestions to add:

Grey Gardens in Kensington Market http://greygardens.ca and the previously-mentioned Richmond Station downtown are very good for seasonal cuisine. They are also both very good at accommodating solo diners.

The Toronto area is perhaps most celebrated for its Cantonese cuisine, the best of which you will need to take a long-ish cab ride to get to (Richmond Hill and Markham). You can check Charles Yu’s recent postings to this Hungry Onion board for ideas.

Agree that you are ‘mostly’ in a wilderness area, although if you’re comfortable with public transit, the ‘Spadina Streetcar’ will take you to the centre of the ‘original’ Chinatown which is now swamped with Vietnamese & Thai places. Traffic downtown is horrendous – the streetcar has a ‘right of way’ so is faster.

For Korean, my current favourite is Orote (maybe a 5-minute walk (west) from Long & McQuaid – entrance on Havelock St which intersects with Bloor). It’s ‘westernized’ Korean but excellent food (and service). Leans a bit towards Japanese – but you’ve included that as an option as well.

I don’t think some of the responders took into account your “no…. white tablecloth” condition. While not commenting on the quality, I suggest you avoid Don Antonio, Alo, Alobar, Kiin (doesn’t take single diners), Harbor 60 or Bannock (closed/rebranded)). I would have supported Aloette (and still do – at the South end of the Spadina Chinatown albeit NOT Asian food).

Thai, in general, is fairly reliable downtown – the issue is whether you’ll need to queue. The popular places don’t necessarily take reservations, One popular choice has been Nana. Pai also gets some love but only the Downtown (Duncan St) location. The other one is “not worth a visit”.

Little Sister is also good for a lighter meal (Indonesian). More upscale and possibly unusual is the Philippine cuisine at Mineral (just steps from the Rosedale subway station).

IMO the only truly ‘Canadian’ place in Toronto is Actinolite. But it’s fully booked and now only does tasting menus. Peameal (actually cornmeal) bacon at St Lawrence market is as ‘Toronto’ as it gets – Toronto didn’t get its nickname of ‘Hogtown’ without reason.

I think Pearl (at Harbourfront) , Dynasty (Yorkville), or Mimi’s (Annex $$$$),Lai Wah Heen (downtown), Kwan (midtown) will suffice for upscale Cantonese food while in downtown Toronto for a business trip, rather than encouraging a business traveller to spend $100 for the round trip to the burbs and spend an hour or 2 in traffic.

Alma for chef-driven modern Chinese (Alma is near Bloorcourt, it is on Bloor west of Dufferin)

I used to drive to Markham or Richmond Hill a couple times a month when I lived near Wilson Ave.

Since moving to the Annex 7 years ago, I haven’t driven up to the burbs once for Chinese food. I’ve been to Scarborough once to meet some Chowhounds at Ding Tai Fung.

Second Little Sister for Dutch Indonesian. The location on Portland would be convenient to downtown.

I just ordered at rustle and still. Super excited and starving (up since 6 AM)! 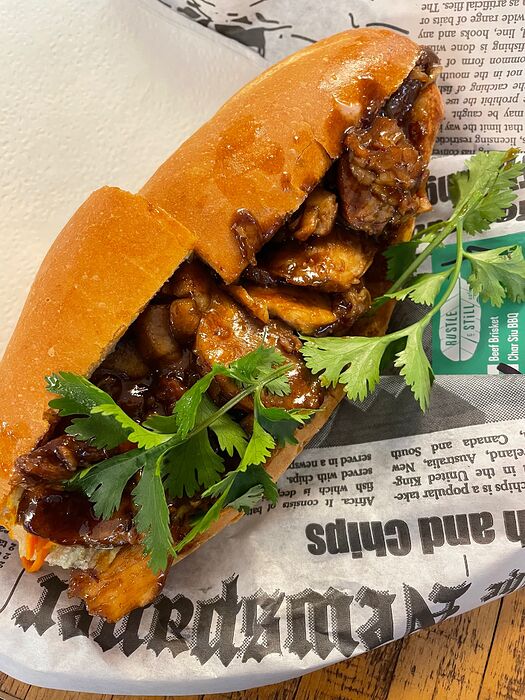 This char sui bahn mi just made my day.

So happy you enjoyed it!!

Personally like Sunny’s Chinese and Mimi. Hard to get in but worth it. R&D on Spadina is also worth a visit

Definitely get away from the waterfront area…not known for great/interesting food.
For unique and unbelievably tasty modern Asian, I highly recommend Dailo https://dailoto.com/ on College Street. Easy to get to from Harbourfront (not far from Chinatown on Spadina). And right next door is Bar Raval, one of the most unique Spanish tapas spots I’ve ever seen. Worth it to walk in to see the interior, even if you don’t stay (though dare you!) https://www.thisisbarraval.com/.
After Dailo, you can walk two blocks to Bar Pompette cocktail bar and sit at the bar. Sister to Pompette (run by a few ex-Michelen-rated youngsters from France). Both are excellent.
https://www.pompette.ca/

If you have time during the day, lunch or brunch at Clay (in the Gardiner museum) is a stunning, but understated spot (with a view) with a focus on local food. https://www.clay.restaurant

And if you need/want another music shop, check out https://www.stevesmusic.com/en/home