Well let’s get the ball rolling. I didn’t see a post yet on last night’s show, (Forgive me if I missed it and direct me to it if I did).

Last night’s episode was part 1 of a 2-parter that will finish up tonight.
Here is a link to the EW recap

The cooking competition goes to California.


And a link to the gossip and gab website that does the recap live. 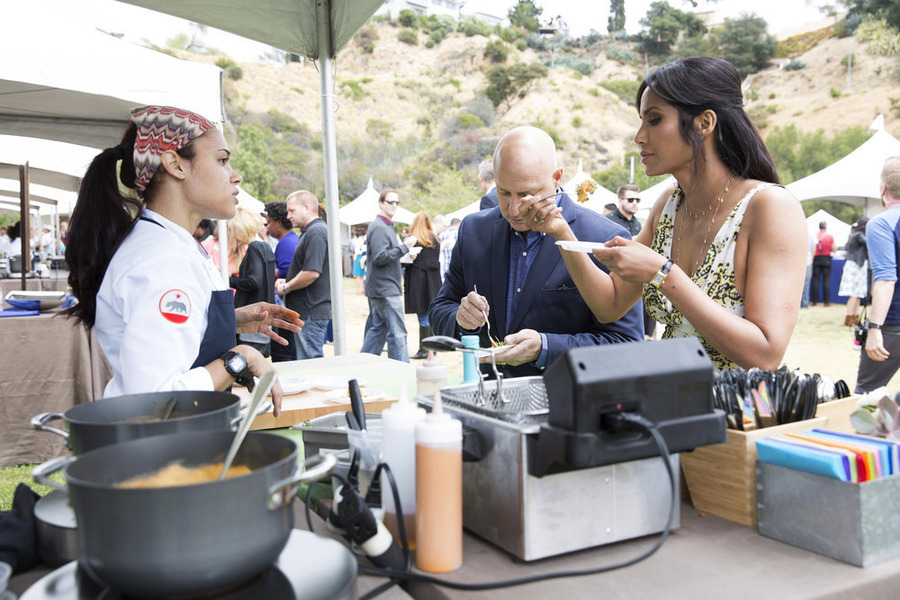 We are back with a new season and new cheftestants on Top Chef 2015 California, as Bravo is finally making my Wednesday nights complete with the Top Chef Season 13 premiere tonight and tomorrow! Yes,

I haven’t watched the episode yet, but I’m a horrible person who reads the recaps online before I do. I will say, and this isn’t too big of a spoiler, that while my favorite Grayson didn’t go home last night, she probably should have.

Thanks for starting. I watched it, but honestly will need to re-watch the episode. There was way to much happening and trying to keep it all straight. I think the impressive thing that I noticed from the bios online is that they were all/are all mostly executive chefs and then they highlighted several had James Beard nominations or Best Chef of X. It will be nice to see if that translates into more focus on inventive food or house drama as the episodes unfold.

My feelings won’t be hurt when Grayson goes home. I didn’t find her inspiring and quite frankly she came off rude.

I am looking forward to hearing what others thought.

A side note, you can use this tip in Hungry Onion for hiding spoilers, quite cool feature!

Comments go to the other thread

My feelings won’t be hurt when Grayson goes home. I didn’t find her inspiring and quite frankly she came off rude.

I like Grayson in her season because she had the only good personality on what was, IMO, the worst season of TC ever. Her food was never special and she kind of proved that by doing meatballs in red sauce as her comeback dish. I don’t think she’ll be there long. I will say, so far, this season does not look as boring as Boston!

Ugh I thought this started later in the month. Have it set to tape now at least.

I’ve just read the recaps, but I think I’m a bit disappointed in her showing so far.

In addition to the poor performance, she had an attitude

So, she’s been through this before, and then after they told her that her dish was a clunker, she starts going off about how she has to be herself, that she has to cook what she cooks to be true to herself.

Hello, Top Chef? They put you through the ringers doing stuff you don’t normally do to see if you have what it takes. She knows this and she still insists on being this childish. Their show, their rules. If you don’t like it, there will be a lot of ways to leave.

It’s possible that she’s trying to play it safe the first few rounds and let others hang themselves, which is working so far but just barely. This gang is good.

At this point I have to wonder if she got a good edit last time, or just looked good sitting next to the awful Sarah and Lindsay. I want to like her, still, but it’s taking work. It shouldn’t take work.

So, since the premier was a two-night affair, I figured I’d just extend this post since I just watched both episodes.

'Top Chef' recap: The chefs get to know L.A. by opening pop-up restaurants

The chefs get to know L.A. by opening pop-up restaurants. 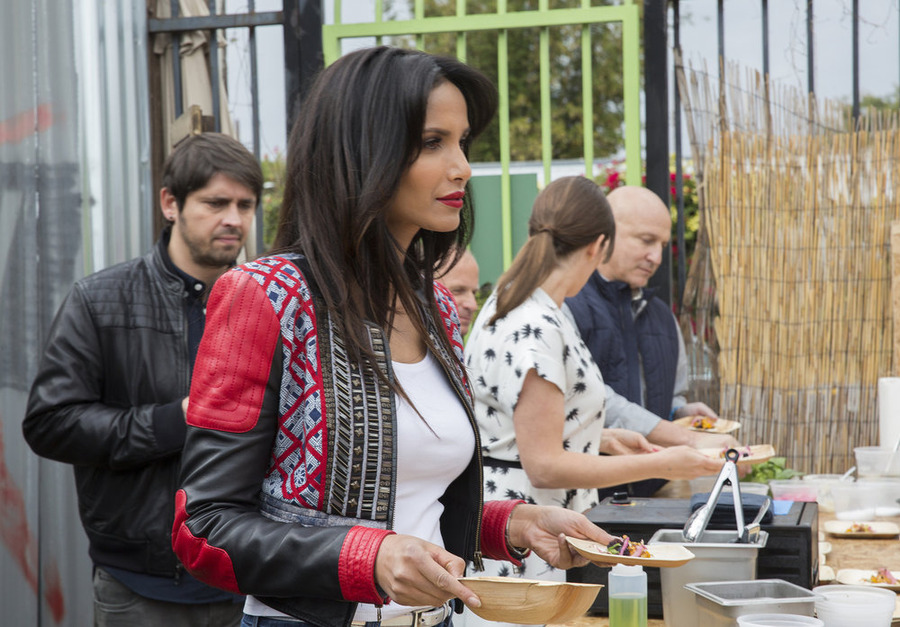 We are back with Night 2 of the Top Chef California 2015 premiere on Bravo tonight, as the new chefs on Top Chef Season 13 take on their second Elimination Challenge in two days! Padma Lakshmi hinted

For the first episode I just have to agree with everyone else about the slob Wesley. I think he’s the one who took over Blais’ restaurant . . . if that’s right I’m sure Blais was turning away every time the guy was on the air. Just gross. And I was shocked that Garrett was eliminated first. Yeah, he was pretentious, but Gail & Emeril seemed to like his dish.

For the second part–pop up time! Team Persia really had things going. They talked to the Persian chef and really seemed to get the flavors. Plus, they worked so well together. I knew the Vegan team was in trouble. Phillip, the man-bun king (who has his picture on the side of his restaurant?) was overly confident. And Grayson. Poor, pitiful, pathetic Grayson who apparently cannot cook anything that doesn’t include meat. And moped. The entire time. Like the guys at the Persian restaurant were thrilled when they first saw what they would be cooking? Their win & Veg’s loss is proof that attitude goes a long way in these competitions. Another shocking elimination: I really thought it was going to be Grayson. Bit it was Renee.Still, I can’t see Grayson and her tude lasting much longer.

For the Thursday night episode, I was surprised at who went home - I expected Grayson to go. She really lucked out.

The Persian food team had it in the bag. EVERYTHING they made I wanted to try. Vegan was doomed with Man Bun and Grayson whingy-whining about having to make something without meat. I grew to like her in the TX season - she had some moxie, although I knew she wasn’t the best chef there.

But this season? Holy smokes, she’s combative “I’ll use SPARKLES next time!” when she was insinuating that it was only the judges who didn’t like her food. I was glad that Tom and Gail immediately held up their “Whoa!” hands and said “Wait a minute - there were 20 food critics there who didn’t think you’re food was the best!”

I have to wonder if returning to the show was a bad idea for her. I’m sure it is playing with her ego a little - kind of like when you get “let go” from a job and then they want you back. Sometimes it is never a good idea to go back, just move on, because your hurt ego makes you do things and act out of character.

I expected Grayson to go. She really lucked out.

She really did - and I’m still surprised they didn’t tell her to pack her knives.

I grew to like her in the TX season - she had some moxie, although I knew she wasn’t the best chef there.

I liked her in season 9 also, but I think that was because I really could not stand the other chefs that season.

I thought it was more of a man pony tail this week!!

I liked her in season 9 also, but I think that was because I really could not stand the other chefs that season.

He was, but I can’t help thinking about those two. Just awful.

Oh gosh, I had conflated Sarah and Heather in my memory.

Oh gosh, I had conflated Sarah and Heather in my memory.

Sorry I brought them back, FIC.

Oh no problem. I just don’t want to blame Sarah for Heather’s ugliness. She did enough on her own iirc.

On a happy note. I already fell in love with Chef Emeril in earlier episodes of Top Chef. Hearing how he helped out chefs and took care of them and wrote checks off his personal account to make sure they had jobs… could he get more awesome?

could he get more awesome?

I know - always thought he was a great person, but I have a new respect for him now.